Maradona brings joy to a fan one final time: Football legend turns and waves to overjoyed little girl in last ever footage of the star, filmed days before he died

Diego Maradona cuts a forlorn figure as he turns and waves to a little girl calling his name in the last ever footage taken of the football legend days before he died.

The 60-year-old can be seen walking with difficulty as he puts his right hand on the shoulder of one of the two men either side of him to steady himself.

But despite his obvious discomfort the former Barcelona and Naples star showed his big heart by turning and waving to a young girl who was calling out ‘Hola Diego’.

She waved from a house next to the rented home he died in on Wednesday two weeks after leaving hospital following his brain blood clot op. 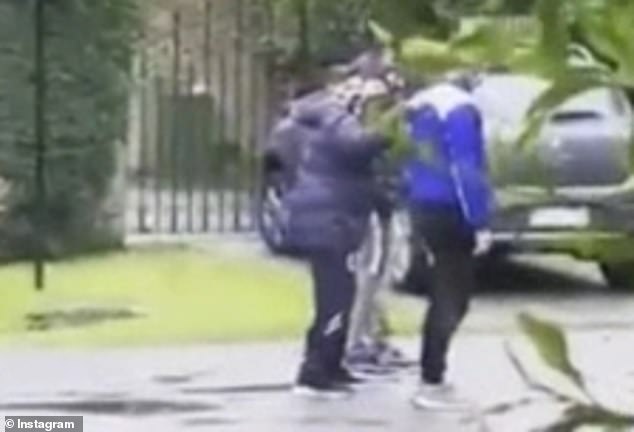 The last ever footage of Diego Maradona taken days before his death on Wednesday shows the football icon turn to wave at an overjoyed girl in San Andrés, Buenos Aires, Argentina 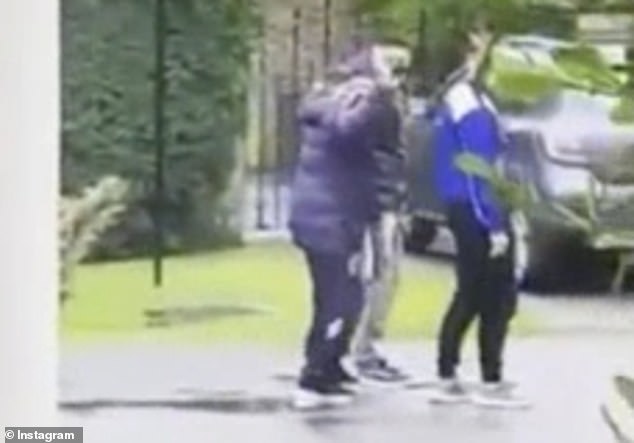 Another man a few steps behind Maradona carried a foldaway chair so the former footballer could rest his legs if the walk got too much for him.

As he turns to wave to the little girl, who was with her mum, the child says: ‘Maradona greeted me!’

The astonishing video was taken by a neighbour at the exclusive gated estate of San Andres where Maradona spent the last fortnight of his life after leaving Olivos Clinic on the outskirts of Buenos Aires.

He was pronounced dead at the property around midday on Wednesday after failed attempts to revive him by a surgeon living on the estate and emergency responders.

His untimely death, attributed to heart failure which caused a pulmonary edema, came less than a month after he turned 60. 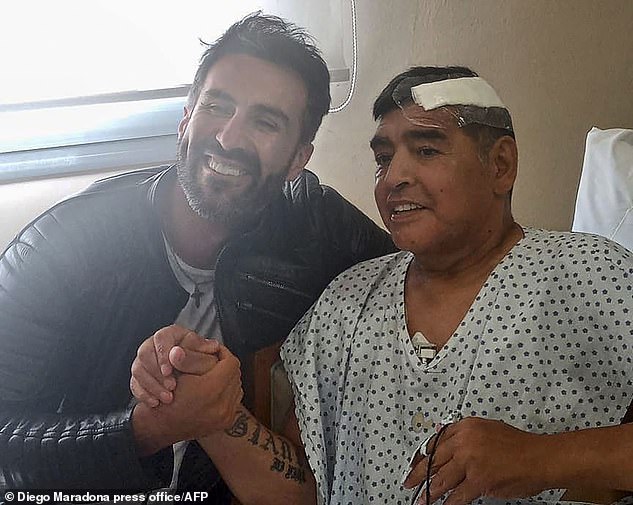 Maradona shakes hands with his doctor Leopoldo Luque in Olivos, Buenos Aires province, on November 11 after his successful brain surgery 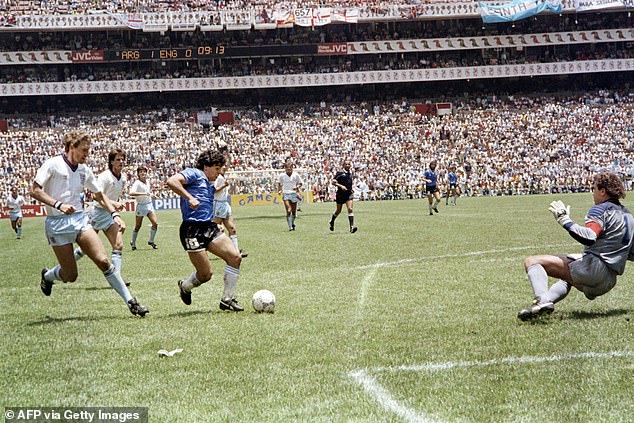 He is said to have died in his sleep.

State prosecutors carrying out a routine investigation into his death have been told a nephew was the last person to see him alive around 11pm on Tuesday.

But overnight reports in Argentina say a nurse checked on him early on Wednesday morning and sent a WhatsApp to his care team just before 9am saying he was resting normally.

Maradona’s lawyer Matias Morla is demanding a full investigation after insisting the first ambulance took more than half an hour to arrive.

Pallbearers carry the casket of soccer legend Diego Maradona after a public viewing at Casa Rosada, the presidential palace in Buenos Aires, Argentina

Yesterday evening the man regarded as arguably the world’s best-ever soccer player was laid to rest at a private ceremony called Jardin Bella Vista on the north-west outskirts of Buenos Aires.

He is understood to have been buried near his beloved dad Diego and mum Dalma, better-known as Dona Tota, who are both at the same cemetery.

Diego’s two daughters by his ex-wife Claudia Villafane, Gianinna and Dalma, were among a group of family and close friends who carried his coffin in an intimate funeral attended by around 40 people.

His controversial lawyer and Rocio Oliva, the former girlfriend who at the start of the day was left in tears after being refused entry to a family wake, were noticeable absentees.

Thousands of well-wishers lined the route from Argentina’s Pink House, the equivalent of the White House where the private and public wakes had taken place earlier in the day, to the cemetery.

The astonishing scenes, reminiscent of the sorts of crowds that normally congregate to welcome home World Cup winning teams, contrasted sharply with the violence that marred part of the public wake yesterday when police closed off the queue to get into the Pink House.

Police were filmed firing rubber bullets indiscriminately at crowds to try to clear the centre of Buenos Aires after using tear gas against youngsters who had thrown missiles including bottles at them.

There were also reports tear gas had been used inside the Pink House after hooligans scaled fencing around the government building to get into the room where Diego’s coffin had been placed so fans could pay their last respects. 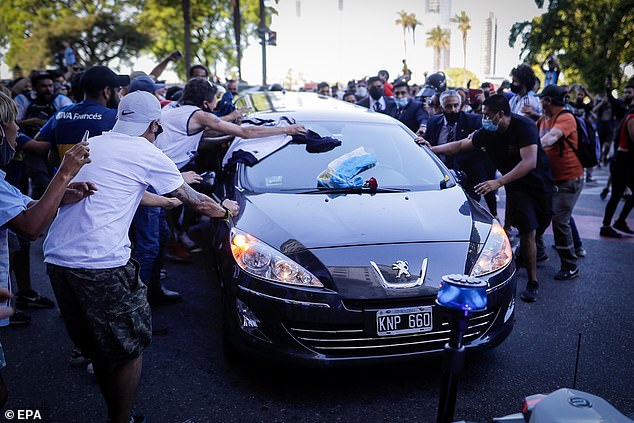 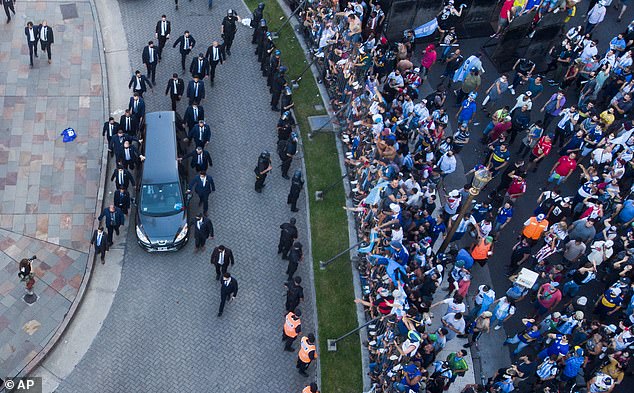 The hearse caring the casket of Diego Maradona leaves the presidential palace in Buenos Aires, Argentina on Thursday after the public viewing was cancelled early due to crowd control issues

The coffin had to be rushed out of the room it was in and moved elsewhere for public safety and the wake, which was going to be extended to enable as many fans as possible to pay their last respects, was cut short.

The violence, superseded afterwards by the emotive scenes of thousands of men, women and children waving and cheering along the 25 de mayo highway as the hearse carrying Diego sped by with a huge police escort, led to 13 arrests.

The only other stain on the historic day was the publication of selfie photos showing a funeral parlour worker by Diego’s open coffin before it was taken to the Pink House for the wake.

The employee, who has been receiving death threats, was later sacked.