A furious property developer has slammed ‘toerag’ guests after finding they held a party in which they trashed the place – including ripping doors off hinges and smashing holes in walls in a £4,500 rampage.

Ryan Luke, founder of Luke Capital Group, had rented out his five-bedroom townhouse in Gateshead, Newcastle, to a group of people in their 20s for the weekend.

When cleaners arrived once the guests checked out, they were met with a ‘bomb-site’ – with internal doors ripped off their hinges and in pieces, holes punched in the walls and the TV damaged.

Mr Luke said it wasn’t his ‘first rodeo’ with destructive guests and, thanks to a contract he had them sign when booking, they were liable for all the damages. But it didn’t stop him saying the guests should be ‘behind bars’ for the damage they had caused. 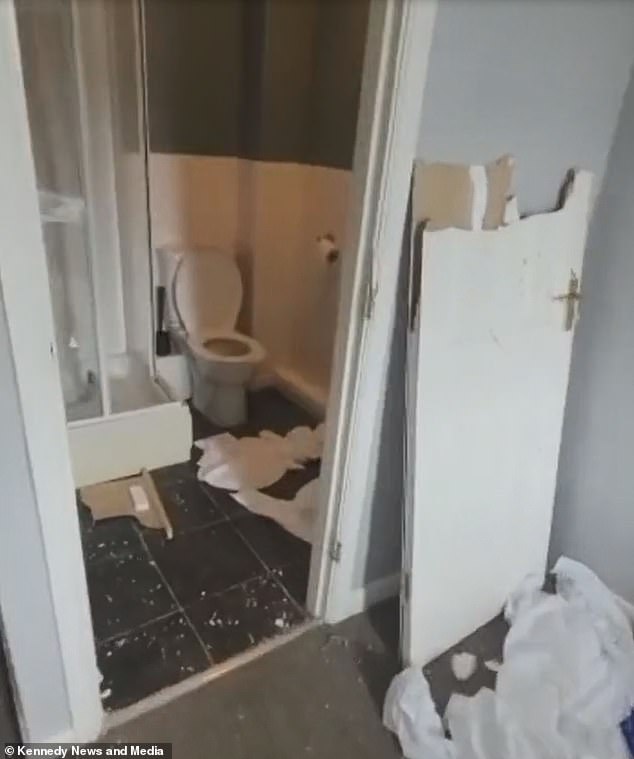 Images from the property showed that doors had been ripped off their hinges and torn into pieces, numerous holes in the walls and the TV left smashed.

Pictures were also torn down from the walls and rubbish left in piles all over the townhouse.

The shameless guests were forced to fork out £4,500 to cover the refurb as well as lost earnings for the time the rental had to be closed.

The 38-year-old has now shared footage of the extensive damage and refurb job from May to warn other hosts and ensure they have adequate contracts in place to protect themselves.

Mr Luke, from Newcastle, Tyne and Wear, blamed a ‘group of little toerags in their mid-to-late twenties’ for the damage.

He said: ‘One of them booked and invited too many people round and got carried away.

‘They had a massive party in there, God knows how many kids were in there at one point.’

He described how contracted cleaners arrived at the property the next day to find a ‘bomb-site’, adding it was ‘disgusting’ and those responsible should ‘go behind bars’.

After sending a handyman out to the property, Mr Luke was given a full assessment of the damage and a detailed video. He then reached out to the lead guest who made the booking.

He said: ‘We can only contact the lead guest and it’s normally the same excuse every single time – “I went home the night before because I wasn’t feeling well so I don’t know what happened but I’ll speak to whoever stayed behind”.

‘There are plenty of other properties that have been in the same state or worse over the years so it’s not our first rodeo of having a damaged property because of guests.

‘We have accidental damage insurance but anything malicious, in my mind is: “why should we claim on our insurance?” 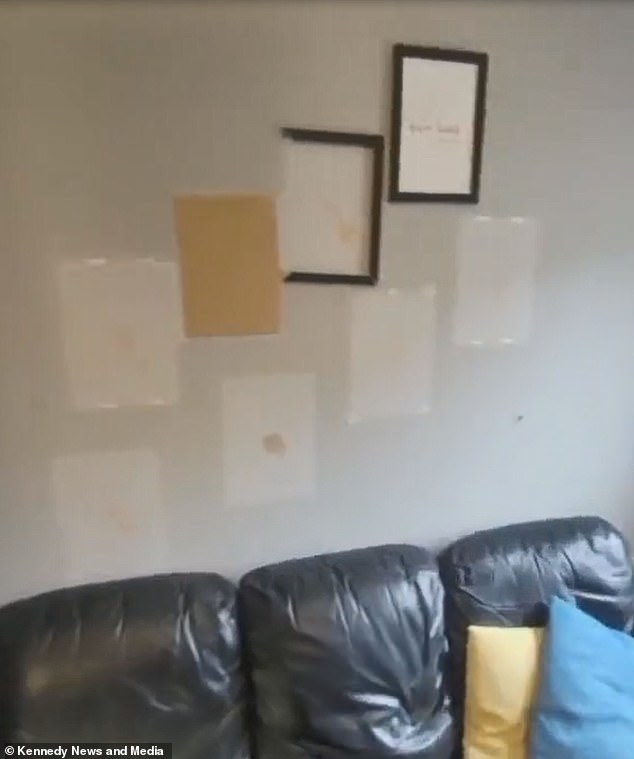 When cleaners arrived once the guests checked out, they were met with a ‘bomb-site’, according to owner Ryan Luke 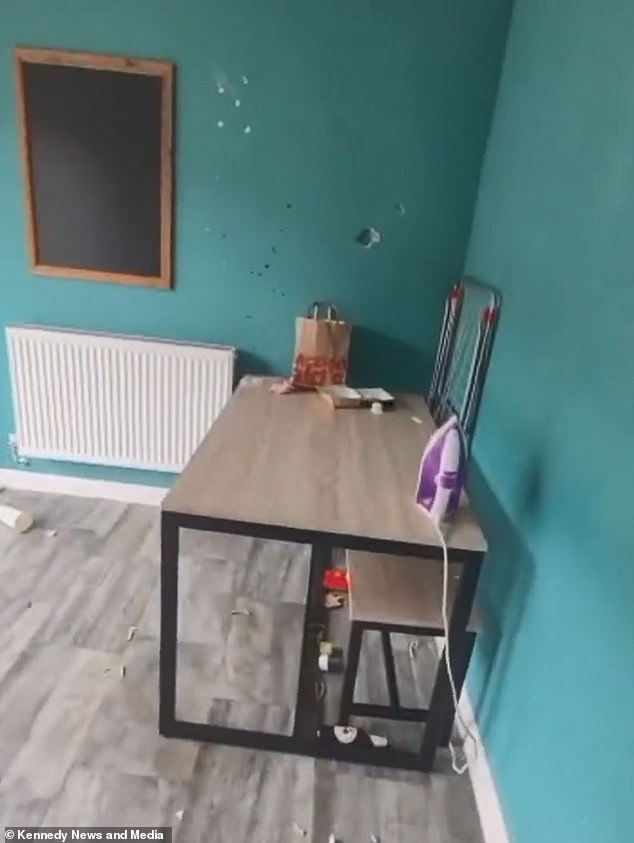 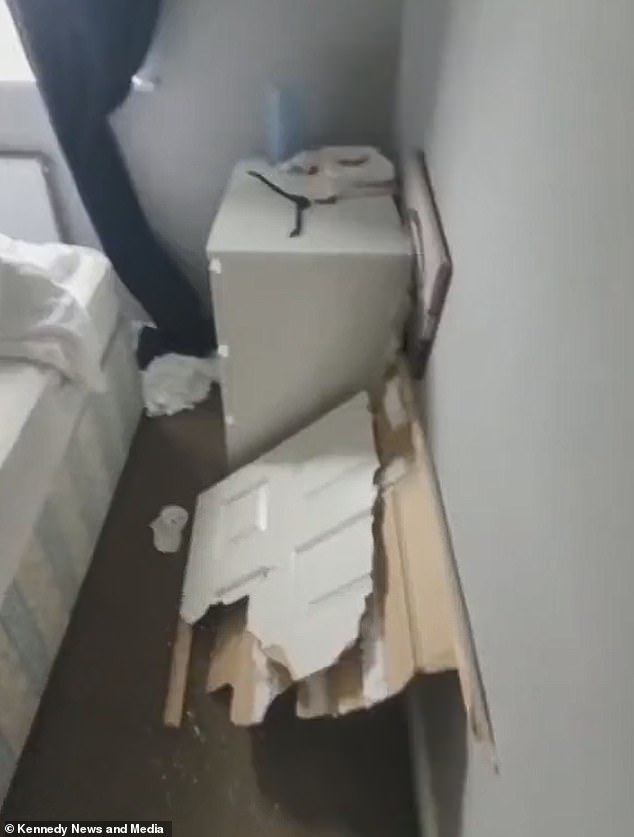 As well as doors being torn off the hinges, they were also left in bits scattered around the property 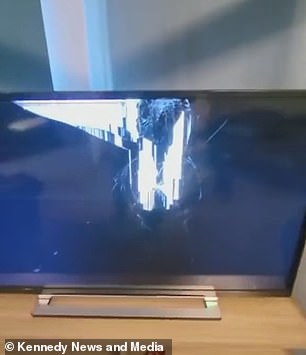 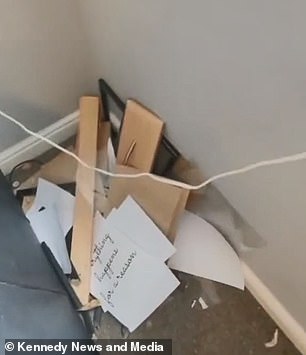 As well as damage to the doors and walls, the TV was destroyed and posters ripped from the walls, with rubbish dumped in corners

‘They’ve vandalised the property so they should have to pay for it. Why should we suffer?

‘They should be the ones suffering because they’re the ones that have been disrespectful.’

Mr Luke owns, rents and manages around 375 houses and flats across England and Dubai.

He runs many of his rental properties as ‘mini hotels’, letting them on a short-term basis with guests via Airbnb rather than having long-term tenants.

He said he has strict contracts to protect against this kind of behaviour: ‘We’ve got a pretty good contract in place that they have to sign that says “I will pay for everything and I am liable for everything”, so they really don’t have an argument.’

He added: ‘At the end of the day it’s a business so my first thoughts were: “how much deposit have we got off the guests? Can we charge more on their card?” – which they give us access to via the contract they sign.

‘Most of them obviously decline given the amount of money it is but the team then speak to the guests and say: “You’ve trashed the property. The bill’s this, how are you going to pay it?”. Then we go into the battle of getting the money. 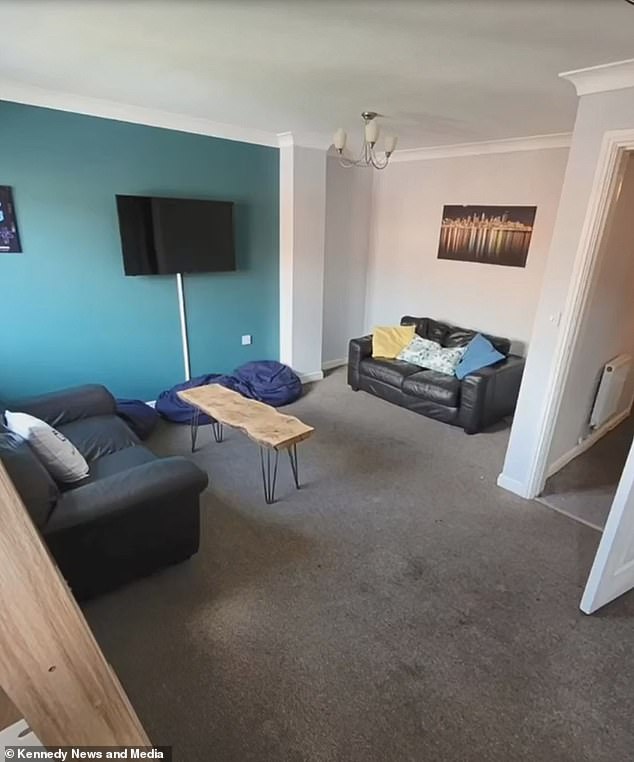 After the incident, Mr Luke charged the guests £4,500 to repair and refurb the spaces they had trashed 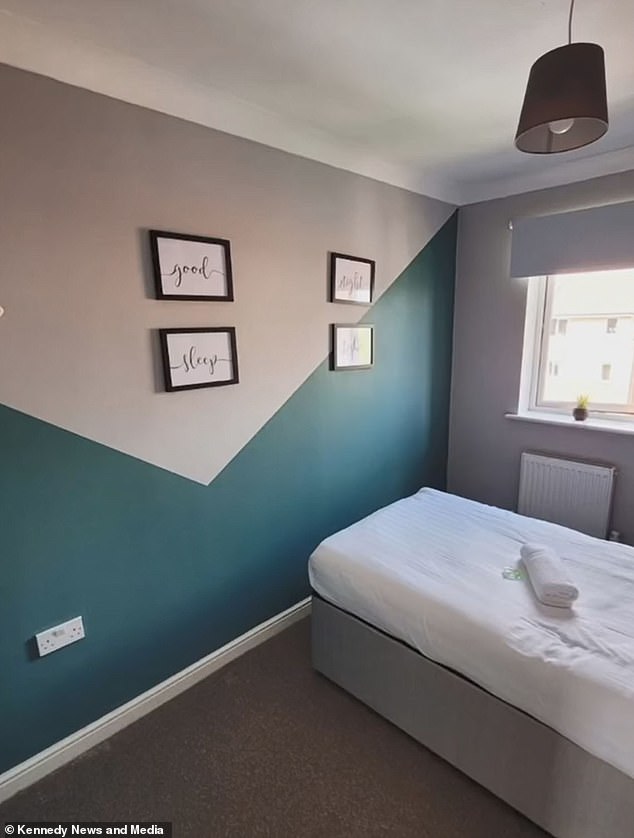 ‘For me it’s just about getting that money back and getting that property turned around before the next guests are in and nine times out of ten, we do that because of the processes we have in place.’

He said the guests responsible for this damage paid up within three days, and it took staff five days to get the property back into a rentable condition.

‘So it is quite penalising for them if they do treat our properties with disrespect.’

Since this incident he has changed part of his business strategy to avoid renting properties out for just the weekend, when he feels they are more likely to be trashed.

Mr Luke said: ‘I’m very emotionally disconnected from the properties having done it for so long – we’ve probably hosted a thousand guests so that wasn’t the first property I’ve ever seen trashed.

‘Although that got trashed we got every single penny off the guest to fix it. It’s more the hassle of having to repair it.

‘It was a few years old so it was probably due a refurb anyway. They paid for the refurb, so it kind of worked out alright in the end.’