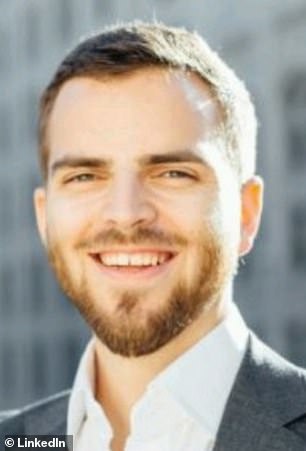 A computer programmer is locked out of a digital wallet containing an estimated $220 million worth of Bitcoin with only two chances left to figure out his password before its contents are encrypted and placed out of reach forever.

German-born Stefan Thomas, who now lives in San Francisco, told the New York Times that he was gifted 7,002 Bitcoins by an early cryptocurrency fanatic in 2011 after creating a ‘What is Bitcoin?’ explainer video.

Yet the same year, he lost his password – known as a digital key – to the online wallet and despite trying all his regular combinations, he has remained locked out as the price of the cryptocurrency has soared in the past month.

‘I would just lay in bed and think about it,’ Thomas told the Times. ‘Then I would go to the computer with some new strategy, and it wouldn’t work, and I would be desperate again.’

While Thomas has kept hold of Bitcoin in other wallets that have already made him rich, he still joins the many cryptocurrency holders who have lost the chance at adding to their wealth – all because they cannot remember their passwords.

They have been forced to watch on as other people cash in, while their own fund lies behind an IronKey, a system which gives users only ten password attempts before it automatically encrypts everything inside.

According to the New York Times, 18.5 million Bitcoin, which could currently be worth about $140 billion, are currently being held in lost or stranded wallets. 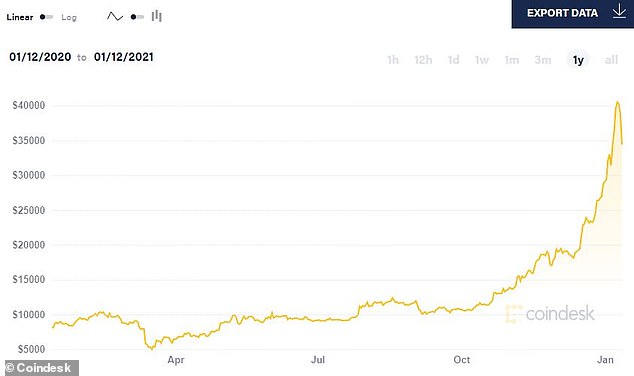 The value of Bitcoin has doubled in the past month, as pictured above 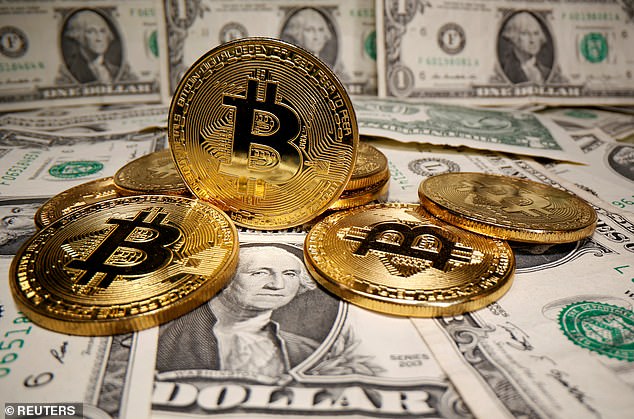 The software used to create Bitcoin means that only the user knows the password and if they forget it, there is no back up to help them gain access to their cryptocurrency

As the value of Bitcoin has risen dramatically in the past month Wallet Recovery Services, which tries to help users recover their lost digital keys, is now receiving three times the number of daily requests.

It says they now have up to 70 people a day placing requests for aid in recovering their Bitcoin riches.

‘Through the years I would say I have spent hundreds of hours trying to get back into these wallets,’ Brad Yasar told the Times.

The entrepreneur says he has a few desktop computers that contain thousands of Bitcoin he created or mined almost a decade ago.

Unable to remember his passwords, he has since placed the hard drives that contain the bitcoin in vacuum-sealed bags that he keeps out of his sight.

‘I don’t want to be reminded every day that what I have now is a fraction of what I could have that I lost,’ he said.

Thomas has also placed his Ironkey in a secure facility to keep it off his mind.

‘I got to a point where I said to myself, “Let it be in the past, just for your own mental health”,’ he said.

Much of the first major appeal in Bitcoin lay in the fact that it was different from traditional bank accounts and online wallets, and would allow anyone in the world to open a digital bank account and store money.

These users could create the wallet without having to register with a financial institution or go through any sort of identity check.

The cryptocurrency is created using a software that develops an address and private key known only to the user. Even when the software is allowing transactions, it does not itself view the password. 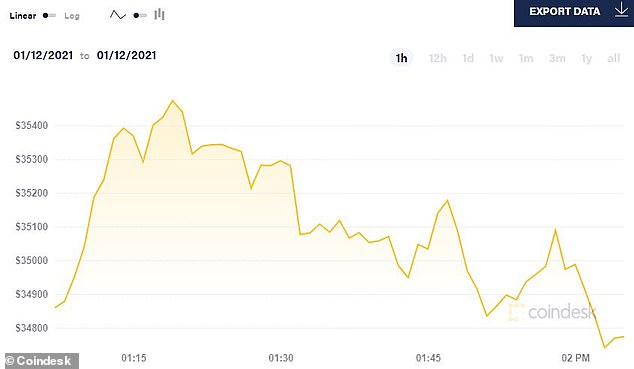 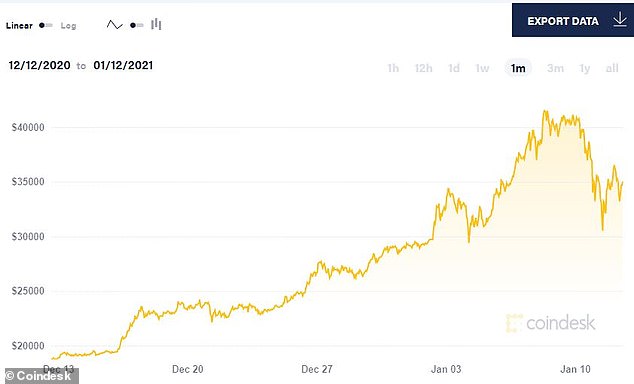 Bitcoin first surpassed the $20,000 level in mid-December and soared above $30,000 earlier this month; a huge rebound from a low of just above $4,000 as the Covid-19 outbreak sent global financial assets plummeting last spring. It reached $40,000 last week, pictured

It made Bitcoin popular among criminals and in countries such as China and Venezuela, where governments have raided bank accounts established by more traditional means.

Yet as it also means that there is no company available that can help users recover and reset passwords.

‘Even sophisticated investors have been completely incapable of doing any kind of management of private keys,’ Diogo Monica, the co-founder of Anchorage which helps companies handle cryptocurrency security, told the Times of the large number of users who have lost passwords.

The situation has meant that Thomas has since soured from the idea of Bitcoin, despite earning money from the wallets he still has access to.

‘This whole idea of being your own bank — let me put it this way, ‘Do you make your own shoes?’ he said.

‘The reason we have banks is that we don’t want to deal with all those things that banks do.’

Since late last year, Bitcoin has been gaining traction with more mainstream investors who are increasingly convinced that it will be a long-lasting asset, and not a speculative bubble as some analysts and investors fear.

WHAT IS BITCOIN AND HOW DOES IT WORK?

Bitcoin is a cryptocurrency – an online type of money which is created using computer code.

It was invented in 2009 by someone calling themselves Satoshi Nakamoto – a mysterious computer coder who has never been found or identified themselves.

Bitcoins are created without using middlemen – which means no banks take a fee when they are exchanged.

They are stored in what are called virtual wallets known as blockchains which keep track of your money.

One of the selling points is that it can be used to buy things anonymously.

However, this has left the currency open to criticism and calls for tighter regulation as terrorists and criminals have used to it traffic drugs and guns.

How are they created?

Bitcoin is created through a process known as ‘mining’ which involves computers solving difficult maths problems with a 64-digit solution.

Every time a new maths problem is solved a fresh Bitcoin is produced.

Some people create powerful computers for the sole purpose of creating Bitcoins.

But the number which can be produced are limited – meaning the currency should maintain a certain level of value.

Why are they popular?

Some people value Bitcoin because it is a form of currency which cuts out banking middlemen and the Government – a form of peer to peer currency exchange.

And all transactions are recorded publicly so it is very hard to counterfeit.

Its value surged in 2017 – beating the ‘tulip mania’ of the 17th Century and the dot com boom of the early 2000s to be the biggest bubble in history.

Some shops and restaurants are accepting for purchases, but overall this is a tiny part of the market of the real economy.

Inflows into bitcoin investment products totaled $24.3 million in the first week of the year. Ethereum, the second largest cryptocurrency in terms of market capitalization, accounted for $5.3 million, according to the latest available data.

The data showed that investors pumped $15.6 billion into bitcoin products and funds in 2020, while ethereum inflows reached nearly $2.5 billion.

Yet, Bitcoin plunged more than 19 percent on Monday, putting it on track for its biggest one-day drop since March as its surge to a record $42,000 last week lost steam.

More than $200billion was wiped off the value of the global cryptocurrency market. At its high last week, the total digital coin market was worth an estimated $1.07 trillion.

Despite this fall, the cryptocurrency still remains 50 percent higher than it was just a month ago.

‘Bitcoin is still up on the year and the current 22% crash won’t intimidate any of the new institutional money that just hopped onto the crypto bandwagon,’ said Edward Moya, senior market analyst, at OANDA in New York.

Experts have claimed that the sudden drop should be welcomed as a ‘healthy correction’, after the 12-year-old cryptocurrency had soared to unsustainable, record-high prices.

Last week strategists at The Bank of America had already warned that the rapidly rising price of bitcoin may be ‘the mother of all bubbles’, comparing it to the tech boom in the late 1990s.

Naeem Aslam, chief market analyst at AvaTrade, said the drop was therefore considered a welcomed ‘healthy correction’ that ‘was due a long time ago’, as reported by CNN.

James Putra, vice president of product strategy for TradeStation Crypto, added: ‘It’s scary when the price of bitcoin just goes straight up. This pullback was needed.’

Bitcoin first surpassed the $20,000 level in mid-December and soared above $30,000 earlier this month; a huge rebound from a low of just above $4,000 as the Covid-19 outbreak sent global financial assets plummeting last spring.

The massive spending on Covid-related stimulus packages had raised fears about rising inflation and U.S. dollar debasement, and investors flocking to bitcoin as a safe haven.

Prior to the crash, on January 5 investment bank JP Morgan said that Bitcoin has emerged as a rival to gold and could trade as high as $146,000 if it becomes established as a safe-haven asset.

Many experts remain optimistic about the future of the digital currency that was invented in 2009 by an anonymous person or group known by the pseudonym Satoshi Nakamoto.