Ex-teacher, 59, cycling a Penny Farthing on 300-mile journey across UK dressed as a VIKING told by Met police he couldn’t carry axes and swords in London

An ex-teacher cycling across the UK dressed as a Viking claims he’s been forced to leave his weapons at the M25 – as police told him it wasn’t a ‘good idea’ to carry a sword or axe through London.

The ‘eccentric’ historian Steve Payne, 59, set off on an epic 300-mile journey on a Penny Farthing on Tuesday in full Viking regalia.

The journey will take him from the Palace of Westminster to Bosham, West Sussex via Essex, Surrey, Hampshire, Somerset and Wiltshire.

He is clad in the 40lbs outfit to raise awareness for homelessness.

The former teacher said the Met Police urged him not to ride through central London with his weapons in light of the March 2017 terrorist attack near Westminster Bridge.

Instead, the self-styled ‘gentleman adventurer’ wore his full chainmail, helmet, tunic and boots but left his sword, scabbard, seaxe knife and axe with a friend before entering London. 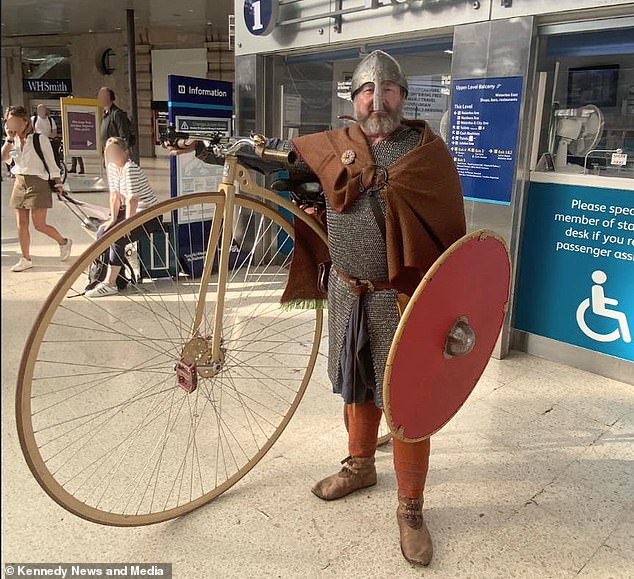 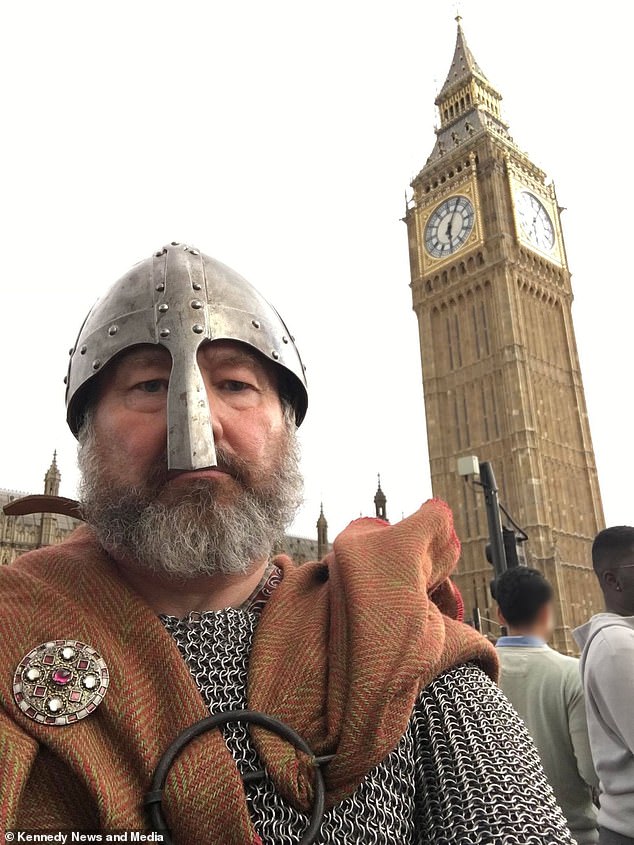 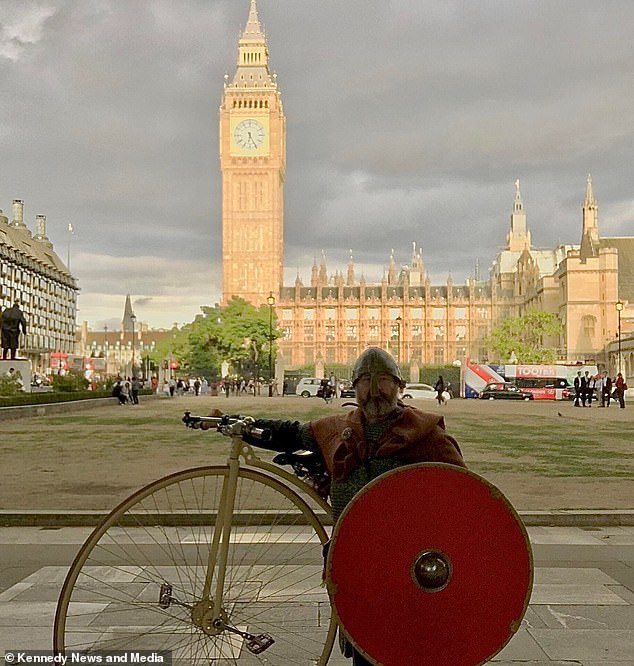 Mr Payne made it to London as part of his journey but left his axe, swords and knife with a friend before heading to the capital

After leaving the capital, Mr Payne continued his adventure and is believed to have picked up his assortment of weaponry en route.

Mr Payne said he called numerous police forces to check if he could travel with his weapons but said the Met were the only one to instruct him not to.

The history buff has previously crossed the Alps on a space hopper and paddled across Wales in a traditional coracle boat to re-enact famous historical journeys.

‘I’m doing it on a Penny Farthing, in Viking armour, chainmail, sword and shield.

‘I’ll be doing it in authentic Viking kit – apart from the fact I’m on a Penny Farthing and not a horse.

‘The Penny Farthing will have two coconut halves attached to the handlebars so that as I ride along, I can knock them together to make the sound of a horse.

‘The seaxe is a long knife which they would use for close quarters combat and also for chopping their meat, eating their bread, but the Met are not very happy about me riding from Westminster Palace [with it].’ 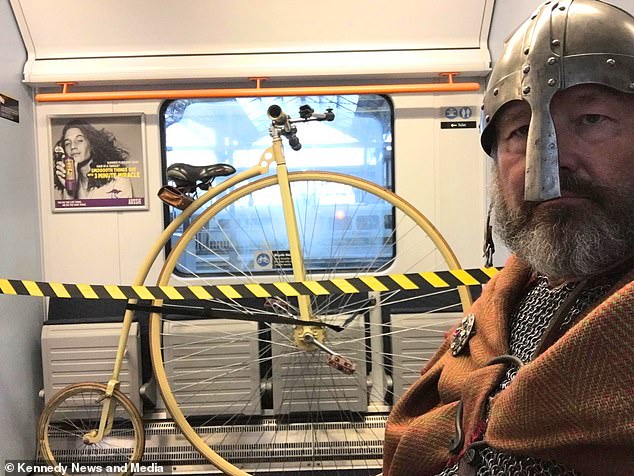 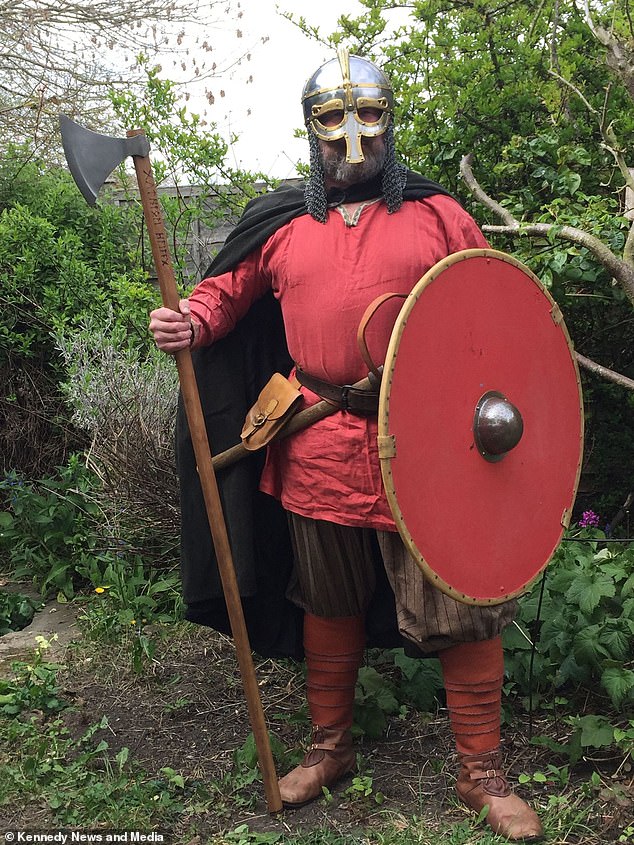 Mr Payne said he was told he would not  be allowed to carry the weapons last week.

He said: ‘Met Police said in view of the fact there was an officer stabbed outside of the Houses of Parliament he didn’t think it was a good idea so I decided not to take the sword.

‘I can totally see their point of view that only [in 2017] someone ran into a couple of people on the bridge then stabbed a copper to death.

‘The chief constables of [other police forces] are fine about it because [the weapons] are not sharp. It’s a stage prop.

‘It’s a full metal sword but it’s probably not a good idea to be hanging around in central London with a sword on your belt.

‘So I’m going to have to give the sword to a friend to do the central London part then pick it up from him as I leave London.’

The tour guide decided to make the ‘slightly eccentric’ trip after being awarded Great British Eccentric of the Year in 2020.

This time, the doctor of Mediaeval History is hoping to relive his high school history lessons by taking on a famous King Cnut legend – where the British king allegedly held back the tide.

Mr Payne said: ‘It’s exactly 1,000 years since King Cnut allegedly held back the tide. This happened around 1022. It was basically the Danish Conquest.

‘I’m setting off from London on my Penny Farthing because I don’t have a horse. I’m following the route they would have taken from London, down to Somerset, up to Wiltshire and across to Essex and Kent, where the final battle took place that confirmed Cnut as the winner. 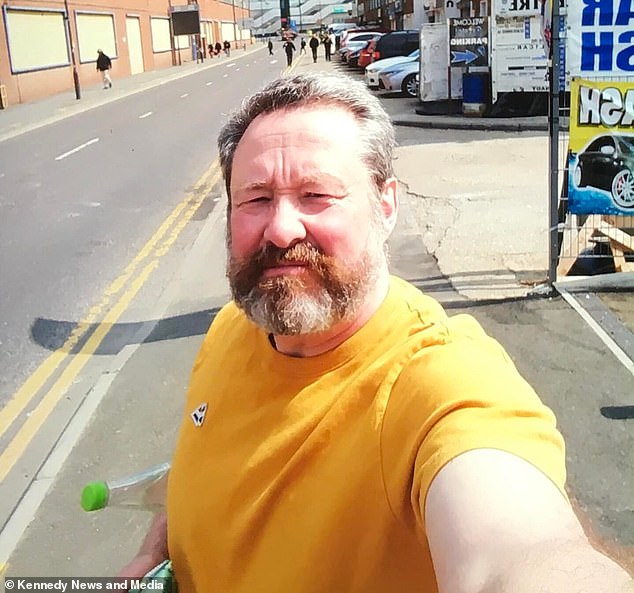 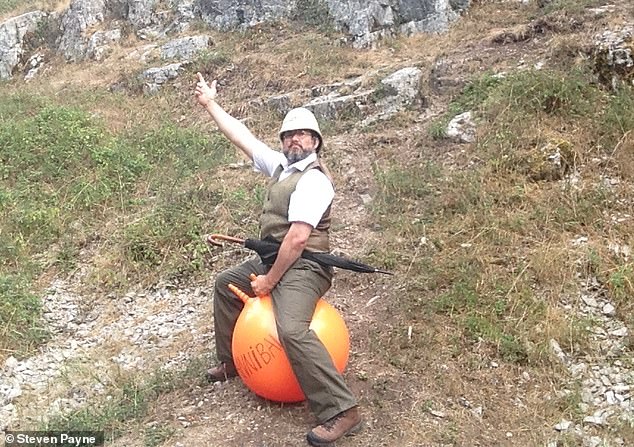 On another of his adventures, he crossed the Alps from Italy to Switzerland on a space hopper called Hannibal 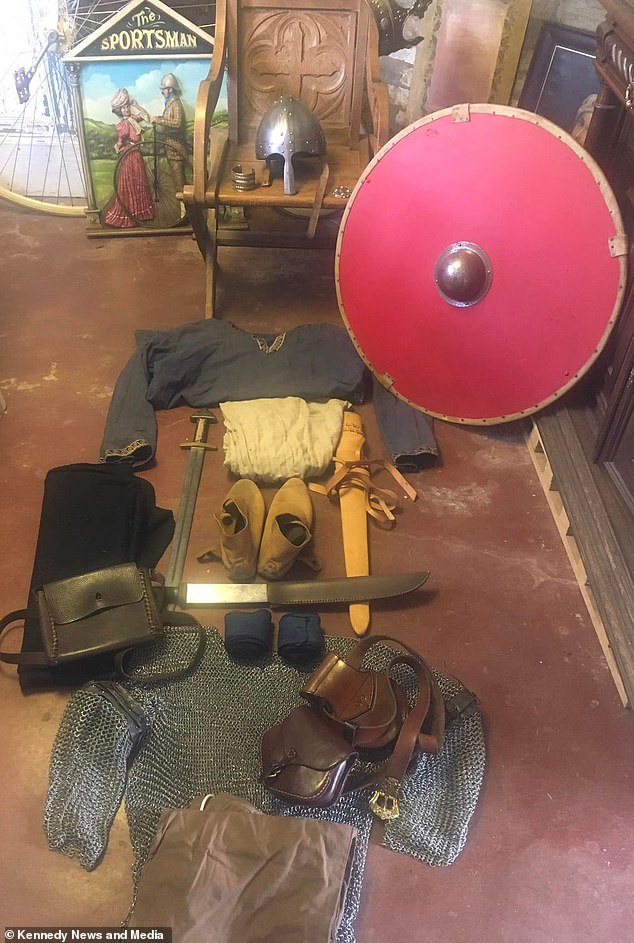 The eccentric traveler’s equipment includes full chainmail, a helmet, tunic and boots along with his sword, scabbard, seaxe knife and axe

‘After that, I’ll be riding down to Bosham to recreate the holding back the tide story.

‘I’ve been a reenactor for many years so I have my suits of armour and costumes from anything from the Roman period to the Second World War. I’m often running around in the background of films as an extra or showing people around castles.

‘The costume I’ve got is not an issue. I could grab hold of anything from a Roman centurions uniform to a Second World War policeman in pretty much a moment.

‘I was voted Britain’s Eccentric of the Year for the last two years and I’ve made a habit of making these slightly eccentric, long distance historical journeys ever since.’

After realising he hated working out at the gym with ‘a bunch of 22-year-olds’, Mr Payne decided to keep fit using unconventional methods – devising quirky ideas for the physically taxing trips.

Mr Payne said: ‘The Penny Farthing is good exercise – I don’t like gyms. It’s got no gears so it’s hard work and good fun.

‘It’s also quite practical because you can see it from a long way off and cars tend to spot you further away then give you a wide berth as you go by.

‘When you get to my age, it’s very hard to keep the weight off and when you’re 59, there’s not much to be gained by sitting in a gym with a whole bunch of 22-year-olds.

‘It’s a lot harder when you get older so I need something that’s also fun because I don’t find running on a treadmill very fun.’

The history enthusiast added he was making the unusual journey for a good cause as he tried to raise awareness for homelessness by sleeping outside throughout the trip.

He said: ‘I’ll be sleeping rough along the way. I’ll be wrapped in my cloak sleeping in hedgerows and under trees because on the very first trip, I was helped by a homeless person in Wincester who helped me to keep warm – he gave me some tips.

‘So ever since then, I’ve been sleeping rough and vlogging as I go about homelessness as an issue.

‘I don’t raise money because then it comes to me and I’ve got to register myself as a charity, so I say take the money and go find your local homeless person and find out some ideas of what you can do to help.

‘I just talk about homelessness as an issue.’

When contacted for comment, Metropolitan Police refused to confirm their position on people carrying swords, axes, scabbards or seaxes like Mr Payne in London and declined to say what they would advise members of the public if they were to enquire about carrying these weapons.

The Home Office confirmed the police were ‘expected to make a judgement on a case by case basis’.

A spokesperson from the Home Office said: ‘It is illegal to carry a bladed article in public (other than a folding pocket knife with a blade of three inches or less) without a good reason.

‘What constitutes a good reason is a matter for the courts. The police is expected to make a judgement on a case by case basis as to whether the person carrying the blade can show that they have a good reason.’