This is the heart-stopping moment a man attempted to carry out the ‘walk of death’ on a cliff before bottling it.

Paul Brown, 41, who is a Cleveland Browns superfan and goes by the same name as the US football team’s founder and original coach, diced with death after he tried to shuffle along the edges of the chalk cliffs at Old Harry Rocks near Swanage, Dorset.

The YouTuber walked up to the drop in just his trainers and an American football kit before he froze-up and began to inch away from the vertical rock face.

The footage, filmed by the online vlogger, zoomed into the cliff’s rocky terrain and showed off the 160 foot drop either side.

The podcaster then squatted down to get his bearings and slowly turned around before he stood up and walked to the mainland.

He could be heard saying ‘okay, I don’t like it’ to his two friends who were sat behind him and watching him attempt the impressive feat.

Mr Brown said the path ‘looked steeper than it looked’. 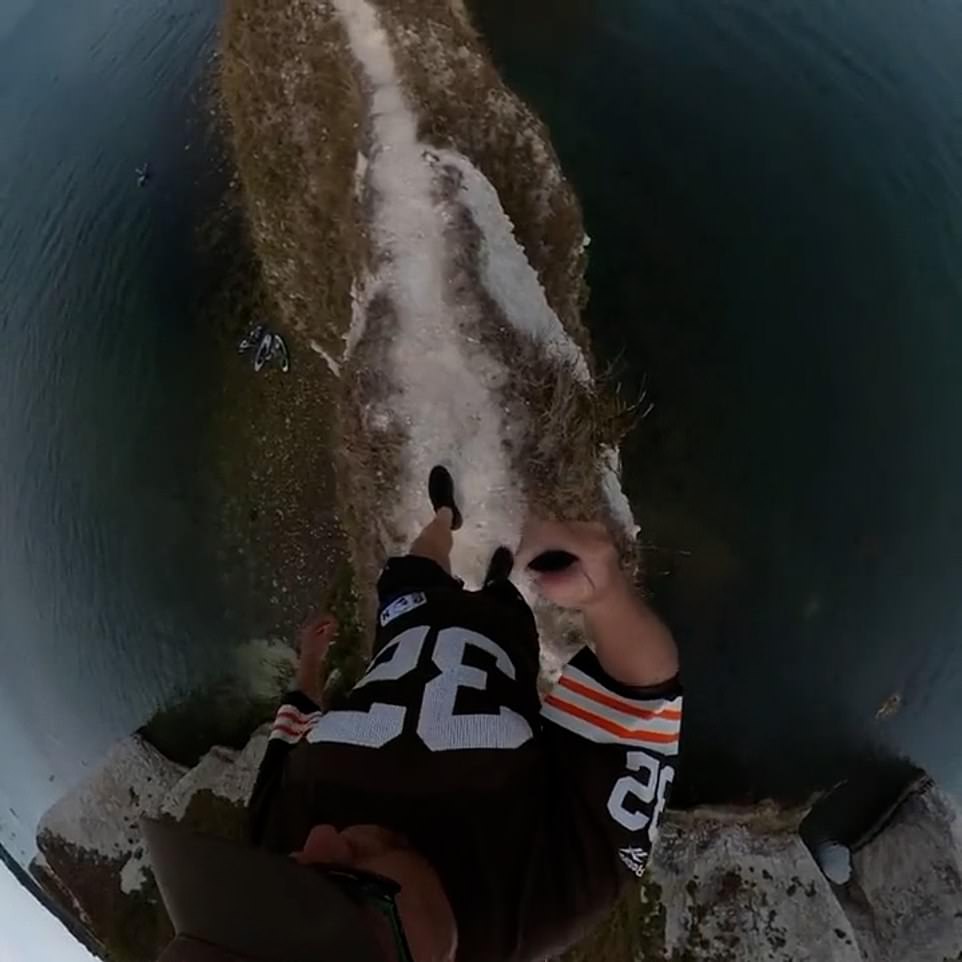 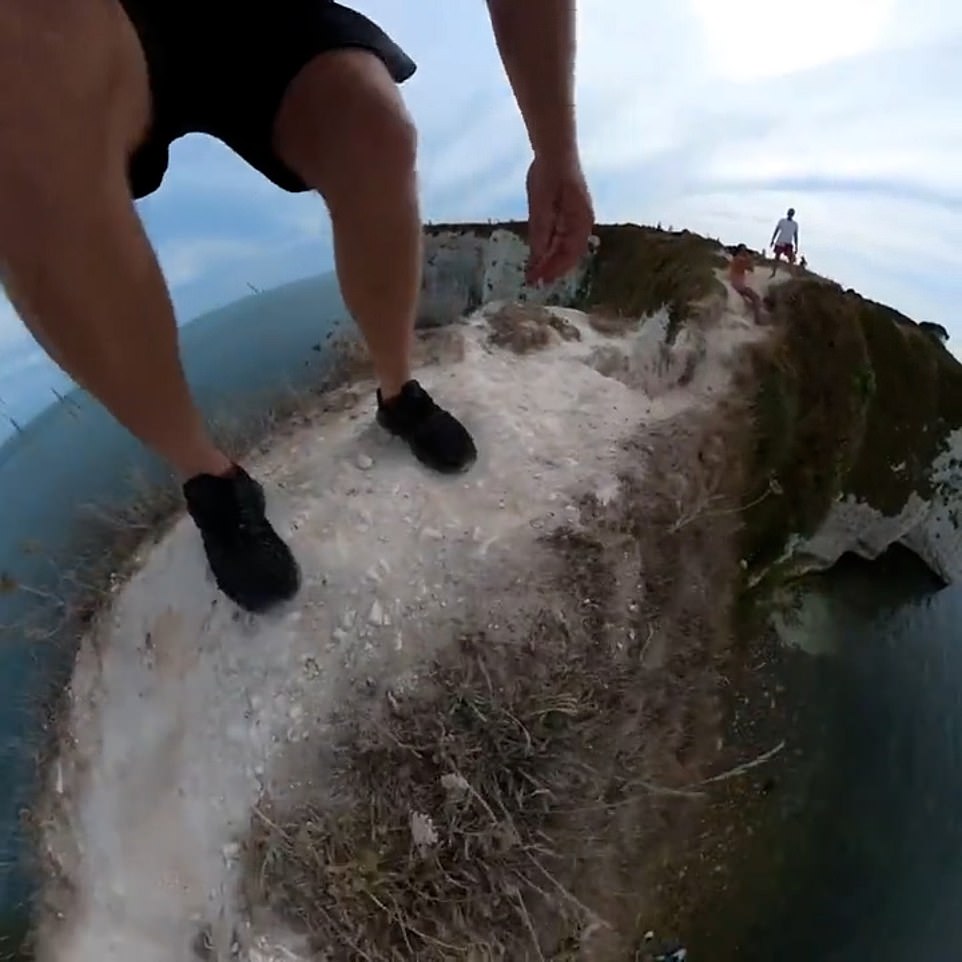 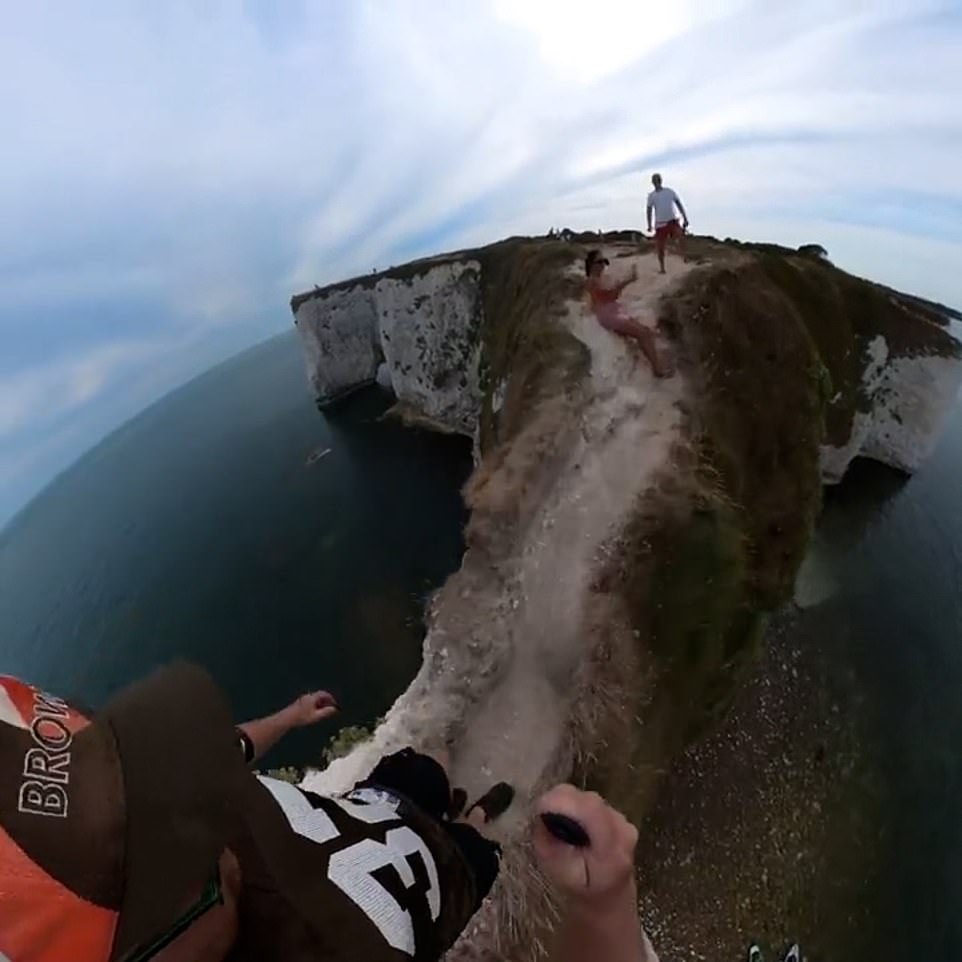 Although Mr Brown is one of many daredevils to have attempted the impressive feat, a few visitors have nearly fallen to their deaths on the steep cliff

One user replied to the sickening footage on Twitter: ‘Watching you walk across!’ attached with a moving image of a man profusely sweating with terror.

A verified account said: ‘that’s crazy’ before another person tweeted ‘be careful. I couldn’t do that and I’ve been skydiving twice.’

In 2017 a woman in her 30s suffered minor injuries after she plunged from the cliff into the sea below.

And two men in 2021 two ‘idiotic’ men played Russian roulette with their futures after they peered off the edges of the 120ft cliff.

Paul told MailOnline: ‘When I got to the edge I thought hang on a minute, there’s a 50 metre drop to the left and right, one silly mistake and I’m dead.

‘I was on a bike ride… and stopped off [at Old Harry Rocks] and then saw there were signs warning people but they weren’t that dramatic.

‘When I started walking I realised I didn’t like it.

‘The reason why I’m keen to talk about it is to save other people’s lives in the future, it’s a cliff edge but you don’t realise how scary it is until you walk across it.

‘It looks as if it is a well trodden path, lives could be saved if it was crossed off, there should’ve been a barrier or a fence there.’