As we ascend the lift in the Melbourne hotel where Malala Yousafzai is staying, we have a stowaway on board.

Ten-year-old Dante Ascui is a capable assistant to his father, Age photographer Luis Ascui, carrying the tripod as we emerge into a large room with a view of the Yarra River. 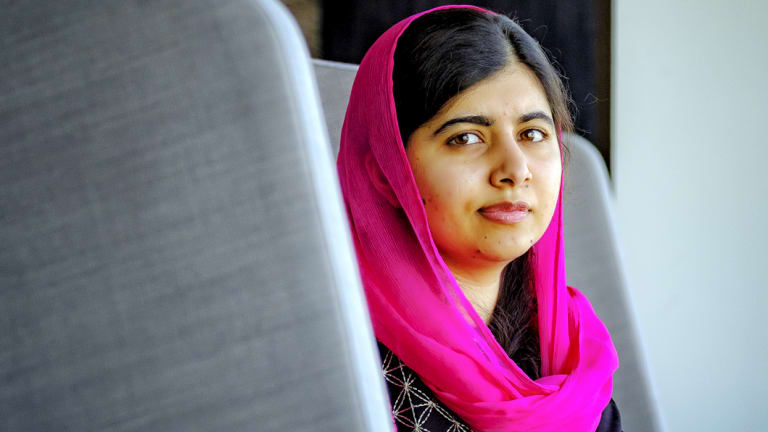 Yousafzai was in Australia in December 2018 for public talks in Sydney and Melbourne as part of the “Women World Changers” series, and to talk about her new book, We Are Displaced: My Journey and Stories from Refugee Girls Around the World.

The Pakistani-born activist is a champion for female education and the youngest Nobel laureate. She grew up in the Swat Valley, in Pakistan, where she began writing a blog at age 11 for BBC Urdu detailing her life during the Taliban occupation of the region.

Through this, Yousafzai rose in prominence; she gave media interviews and was nominated for the International Children's Peace Prize.

But in October 2012, while on a bus after taking an exam, 15-year-old Yousafzai and two other girls were shot by a Taliban gunman in an assassination attempt in retaliation for her activism. 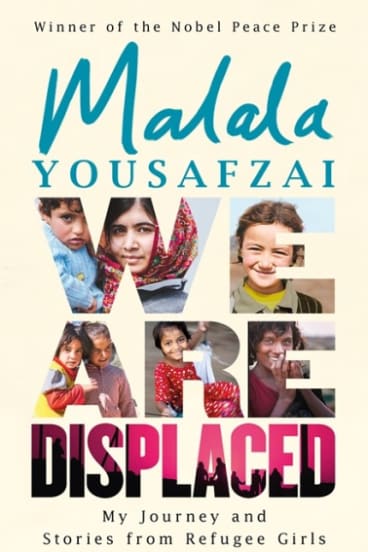 Malala Yousafzai’s latest book, We Are Displaced, published in Australia by Hachette.

Yousafzai is often quoted as saying she tells her story not because it is unique, but because it’s the story of many girls. In We Are Displaced she makes good on this sentiment.

The first part of the book tells the story of Yousafzai’s family being uprooted and displaced from their Swat Valley home in “paradise”.

The second part is devoted to powerful first-person stories from young refugee and internally-displaced girls from war-torn regions around the world. The reader is introduced to Marie Claire from the Congo, Najla from Iraq, Sabreen from Yemen and others, who tell stories of civil war, persecution and the death of family members through the eyes of girls.

Yousafzai hopes it will encourage people to become more curious about refugees, their humanity and experiences.

“People and the media talk about millions of immigrants coming to 'our' countries, millions of refugees,” she says. “It’s portrayed very negatively. But when I go and I sit with the refugee girls, these girls want to be journalists and teachers and astronauts and they have dreams and they have hopes. I thought it was crucial we told the stories of these incredible refugee girls.”

Every year, on her birthday on July 12, Yousafzai travels to a different country where girls and their issues need attention. So far these include Nigeria, Lebanon, Jordan, Kenya, Rwanda, Brazil and Iraq. 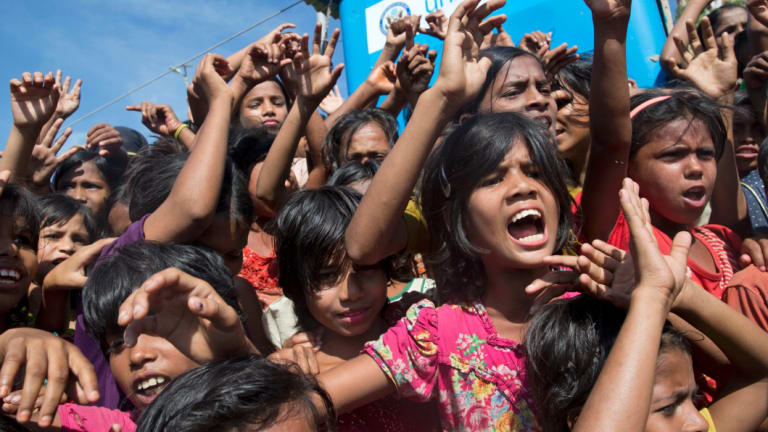 Rohingya refugees during a protest against repatriation process at Unchiprang refugee camp near Cox’s Bazar in Bangladesh in November.Credit:AP

“Their lives are miserable in these places [refugee camps], but they’re still hopeful, and still positive about their future, that one day things will get better for them. If this does not bring empathy, maybe our hearts are made of stone,” she says.

Perhaps one day her birthday mission will take her to one of Australia’s offshore processing centres. Yousafzai says she is shocked at the treatment of asylum seekers on Nauru and Manus Island, calling it unjust and cruel. She notes many asylum seekers make a significant economic contribution – pointing out Albert Einstein as an example.

Written in simple, accessible language, her new book is likely to appeal to teens interested in understanding the human dimension to global geopolitical upheaval. But world-weary adults will also find succour in the sense of optimism within.

Yousafzai says she’s confident young people are passionate enough to want a sustainable future for the world. It’s the adults she worries about: “We need more from adults, especially from politicians, from governments, to be more welcoming and more open-hearted towards refugees.” 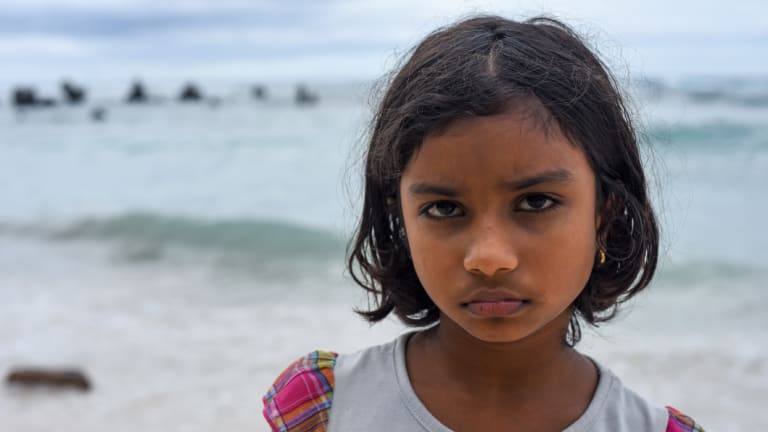 Sri Lankan refugee Sajeenthana, eight, who was detained on Nauru for five years before being medically evacuated to Brisbane.Credit:Lachlan Hinton

A marked sense of longing for home permeates the stories in We Are Displaced, often for a place (or people) the girls can never return to, or that no longer exists.

Maria, who was internally displaced because of the 50-year civil conflict in Colombia, speaks of her childhood on the family farm, a time before her father had been violently killed and her family had fled.

“I have never felt ‘at home’ in any other place than the one I keep alive in my head, from when I was a child, before my whole life changed,” she writes.

Yousafzai herself knows that even if displaced people do reach safe haven, and settle as well as they can, they often feel a part of their heart is missing.

Her family were able to return to the Swat Valley last March and see family and friends for the first time in more than five years. The family home remained intact – her school books, drawings and trophies were dusty but untouched.

Now in her second year of a philosophy, politics and economics degree at Oxford University, Yousafzai feels privileged to be studying at the 1000-year-old institution and proud to set an example by gaining an education.

Her university commitments are balanced with her work for the Malala Fund, an international not-for-profit organisation focused on helping girls go to school.

Employing a staff of 24, it brings in grants of about $4 million a year and uses the donations to support girls in places like Pakistan, India, Afghanistan, Lebanon, Turkey and Brazil.

These countries were chosen because of the glaring gender disparity when it comes to education access. There are particular groups, like Afro-Brazilian and indigenous populations, who face specific discrimination.

Yousafzai identifies as a feminist – “100 per cent” – but when she’s sitting with a girl in a refugee camp, they don’t often use the word. They talk about their rights, their future, their education and how women deserve equal rights. These girls tell her they should have equal opportunities with the men in their lives, regardless of their status as refugees or female. 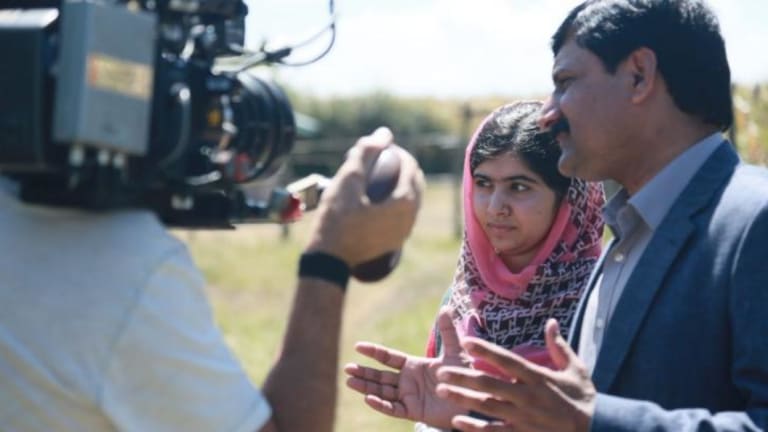 Malala Yousafzai and her father, Ziauddin Yousafzai, in the documentary, He Named Me Malala.Credit:Fox Searchlight Pictures

She points to the example of her father, Ziauddin Yousafzai, who has also recently released a memoir called Let Her Fly.

“My father was a feminist before he knew the word. It’s about raising awareness regarding equality.”