MAIL ON SUNDAY COMMENT: This is far too grave a decision for four men to make in private. Who speaks for the British people?

We are solemnly informed that a new and near-total lockdown is to begin on Wednesday night, and that it is wholly necessary to save us from thousands of avoidable deaths, and from the sight of coffins piled up in skating rinks. We are told, once again, that the NHS will be overwhelmed if we do not do this. And we are solemnly promised, once again, that it is just for a few weeks, and will end in time for Christmas.

Well, the Government had better be right, first about the justification for this action, and secondly about its pledge that this time the shutdown will not stretch into months of misery and loss. It had also better be telling the truth about its determination to keep the schools open. Closing them was a major mistake last time, which did the country and its children serious, permanent harm.

There is something about this language of fear and urgency that brings to mind a similar attempt to summon public support for a major and risky Government policy, nearly 20 years ago. It is worryingly reminiscent of talk about the Iraqi tyrant Saddam Hussein’s ‘weapons of mass destruction’ and his supposed capacity to attack us in 45 minutes, in the days of Tony Blair. The weapons did not exist. The 45 minutes was a fable. But the menace did its work. Public, media and parliamentary support for British participation in the Iraq invasion were achieved. It was only much later, when the damage had been done, that doubts began to creep in. 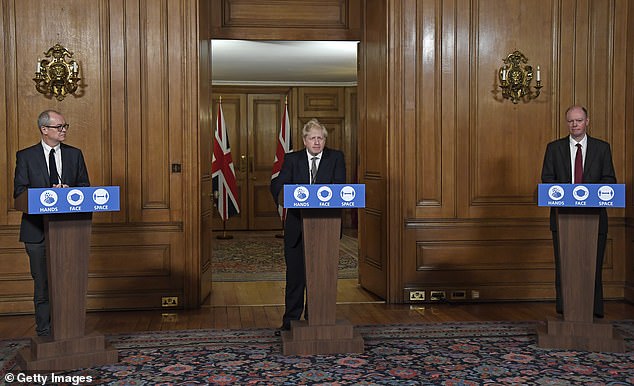 Many people still trust their political leaders, though those leaders give us less and less reason to do so. It is in a way right that we should take our rulers at their word. What else can we do? Our civilisation is based on trust and we ought to be able to assume that elected Ministers will be truthful to us, obviously within the limits imposed by national security. Perhaps just as important, we like to assume that they are truthful with themselves, that they examine properly the options before them and do not simply pick those policies that they favour, without a thorough and balanced examination of the evidence.

Do they? But the Government should also trust the people, and level with them. Is it doing so now? Or is it treating us with scorn?

In a modern democracy, with the huge communication resources provided by the internet, it is perfectly possible for the Government to make a detailed case for its actions to millions in a matter of hours. There is no risk in this. In the case of the coronavirus, the enemy is not a sophisticated foe with powerful and insidious intelligence services, snooping on our every move and trying to outwit us. It is a senseless virus that has no idea how we are responding to it and would not alter its behaviour if it did in some way know our plans.

So what is the reason for the secrecy about the making of Government policy, the apparent total reliance for advice on a small closed group of experts, and the unwillingness to discuss policy openly with the many dissenting scientists who have their doubts about it, such as the distinguished Oxford epidemiologist Sunetra Gupta? And why is it that crucial statistics – on recovery from Covid after hospitalisation, on actual real time occupancy of intensive care beds, on the real meaning of figures in general, are so very hard to obtain?

There have been repeated problems with official figures on this epidemic, especially in the way that deaths are recorded and attributed. Professor Carl Heneghan, of the Oxford Centre for Evidence-Based Medicine, has offered frequent and cogent challenges to official death totals and brought about a change in the way in which they were presented. Rival official numbers for infections and deaths circulate simultaneously, causing endless opportunities for confusion.

Many other doubts remain. Huge prominence is given at Government press conferences – and by an uncritical, propagandist BBC – to deaths from Covid-19. But tallies of fatalities from other diseases, often much larger, are never given, so that the information about Covid is presented wholly out of context. Comparisons with previous winter crises, often of similar scale, are not made. Such crises, also caused by respiratory diseases and largely affecting the elderly, have often put a strain on the NHS without the Government of the day resorting to lockdowns. Discussion of countries that have managed without lockdowns, such as Sweden or Japan, is rare. It is as if alternatives to the lockdown policy do not exist, though they do.

Recent revelations about the March-April period have cast doubt on much of what was believed at that time. If we had known these things, would Parliament have accepted the extreme measures imposed on us? Fraser Nelson, editor of The Spectator magazine, last week published a number of major disclosures. Hospital numbers now available demolish the belief that the March lockdown was caused by a surge of disease. They also undermine the view that the shutdown was the reason deaths began to drop.

Covid deaths peaked on April 8, 16 days after lockdown. We now know that Covid’s infection-to-death time-lag is about four weeks, which suggests that fatal infections peaked well before lockdown began. They were probably dropping fast before Boris Johnson’s proclamation of a national standstill on March 23. The NHS as a whole never came close to capacity. On April 11-12, the peak weekend for Covid cases in hospitals, almost 41 per cent of general acute beds were unoccupied.

As Mr Nelson has rightly said: ‘The real scandal is the collapse in non-Covid healthcare at a time when hospitals and A&E wards were not deluged or overrun but half-empty.’ Could we be facing a similar error now?

It is also very unhealthy that the decision to begin a second lockdown was taken by a four-man committee in which Chancellor Rishi Sunak, apparently the only voice of scepticism, is automatically outnumbered. And it is disturbing that Mr Johnson, the man who freed this country from its slavish relationship to Europe, should here be following the example of France’s increasingly autocratic President Macron.

Who speaks for the British people in these decisions? The voices of countless men and women, who have worked for years to build and grow small businesses, borrowing against their own precious homes, now faced with ruin through no fault of their own, can hardly be heard.

Nor can the voices of millions employed in travel, hospitality, theatres, cinemas and high street stores who are now enduring the real prospect of redundancy perhaps lasting for years. The social and political implications, and the long-term health consequences of this, are incalculable. What is the House of Commons for, if not to examine such policies fiercely and fairly, with all voices represented?

This decision is one of the most important ever taken affecting the future of this country and its people. As Parliament’s distancing measures have turned a troublesome, testing assembly into a tame committee, perhaps some way could be found of getting all our MPs into one room again, perhaps the ancient, spacious grandeur of Westminster Hall.

But in any case this is far too big a decision to be taken by a few men in private. Do we really need to do this drastic, risky thing? Parliament must think and debate properly first.