Good news for home buyers! Interest rates hover at their lowest level since September triggering a leap in mortgage applications of nearly 28% in a week

Consumers returned from the holiday season to find mortgage rates at their lowest level since September.

Mortgage application volume across the US increased by almost 28% last week compared with the previous week, according to the Mortgage Bankers Association’s (MBA) seasonally adjusted index. 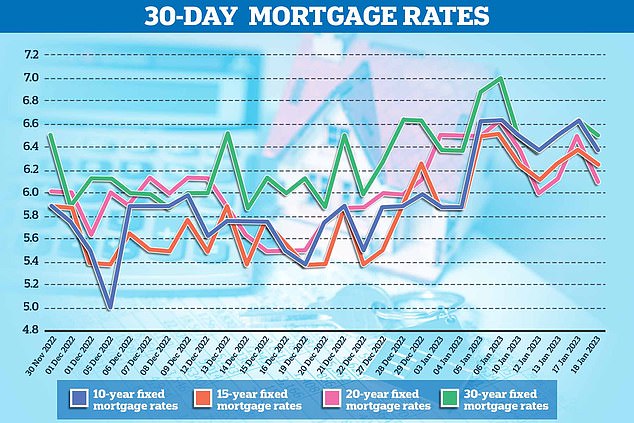 Refinance saw the biggest shift, up 34% from the previous week. However, it was still 81% lower than the same week one year ago.

The refinance share of mortgage activity rose to 31.2% of total applications from 30.7% the previous week.

Applications for a mortgage to purchase a home increased 25% week to week but were 35% lower than the same week one year ago.

Based on data compiled by Credible, mortgage rates for home purchases fell for all key terms since January 17, 2023.

Mike Fratantoni, senior vice president and chief economist at the MBA, said: ‘As we enter the beginning of the spring buying season, lower mortgage rates and more homes on the market will help affordability for first-time homebuyer.’

The market, however, is not seeing any surge in inventory.

The number of active listings is about 21% higher than it was a year ago, according to Redfin, a real estate brokerage.

That is largely due to homes now staying on the market longer, with far fewer sales.

New listings of homes for sale have decreased 22% year over year.

Meanwhile, the US government was due to hit its $31.4 trillion borrowing limit on Thursday, amid a standoff between the Republican-controlled House of Representatives and President Joe Biden’s Democrats that could lead to a fiscal crisis in a few months.

Republicans, with a newly won House majority, aim to use the congressionally mandated federal debt ceiling to exact spending cuts from Biden and the Democratic-led Senate.

Thursday’s deadline will have little immediate effect, because Treasury officials are prepared to begin employing emergency cash management measures to stave off default.

More serious risks will emerge closer to June, when the government approaches the so-called X date, beyond which the Treasury would run out of emergency maneuvers.

Ahead of that deadline, there was no sign that either side was willing to bend. 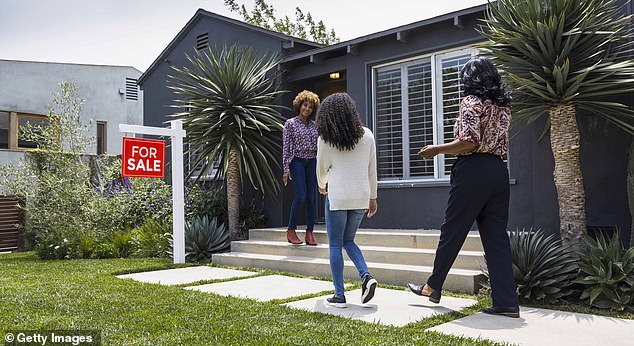 Pictured: A couple of people being shown round a property (file photo)

‘It is something that should be done without conditions. We should not be negotiating around it. It is the basic duty of Congress to get that done,’ White House Press Secretary Karine Jean-Pierre told reporters.

Republicans are instead pursuing a ‘debt prioritization’ plan that would seek to avert default by urging the Treasury to prioritize debt payments, and possibly other priorities such as Social Security and Medicare, should the limit be breached during negotiations. Republicans hope to complete the legislation by the end of March.