Louisiana Demoratic candidate Katie Darling delivers in a new campaign ad – which features direct-to-camera footage and images of the candidate giving birth to a baby boy.

Darling, who is running against House Minority Whip Rep. Steve Scalise, calls out the state for having one of nation’s most strict abortion laws.

‘We should be putting pregnant women at ease, not putting their lives at risk,’ says Darling, who earlier in the ad can be seen pregnant while tending to the family homestead along with her husband and six-year-old daughter.

The ad, which has received more than a million views since she posted it Monday, features footage of the candidate grimacing in her hospital bed, apparently during the birth of her baby.

Later, it shows her holding her newborn soon in her hospital bed while her husband looks on. 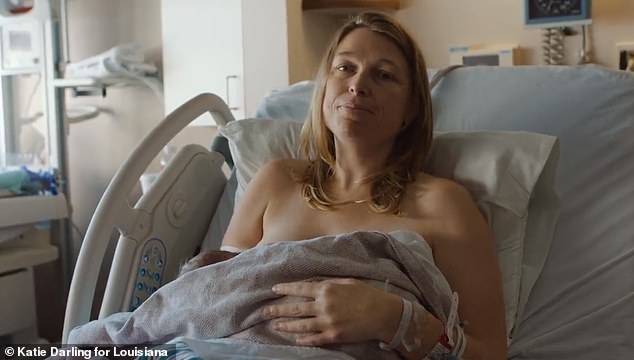 The first-time candidate touted the ad on Twitter, with text that doesn’t mention abortion but points to the state’s low achievement in rankings.

‘Louisiana ranks 50th in crime, 48th in education, and 46th in health care. I’m running for Congress to stop this race to the bottom because our children deserve better,’ she writes.

It begins with rural scenes from the candidate’s home in St. Tammany Parish. ‘Our family composts, collects rainwater and grows our own food. My husband and daughter helped take care of the chickens,’ she says in voice-over.

She says her husband and daughter help take care of the chickens.

‘And there’s someone else who’s gonna be joining us and helping to pitch in with farm life very soon,’ she ads – before the ad cuts to the main event.

With footage of a car ride to the hospital with her husband, she talks about the threat of global warming and low-performing schools – ‘and about Louisiana’s new abortion ban. One of the strictest and most severe in the country.’

‘I’m running for Congress because I want that better path for you. For her. And for him,’ she said, looking at her newborn.

‘I think there are a lot of folks who connect with having a family and dealing with the challenges we face in Louisiana – climate change, education and a severe abortion ban,’ she told the Lafayette Daily Advertiser, speaking about the ad.

The 36-year-old is considered a long shot candidate against Scalise, the No. 2 ranking Republican, who represents the suburban district and would gain even more sway if Republicans capture the House. She says she ‘worked my way up from bartender to CEO.’

Her son Ollie was born on Sept. 14, according to NOLA.com.