The potential loss of Victoria's AAA credit rating could cost the state up to $10 million per year, the Treasury has revealed.

Treasurer Tim Pallas has acknowledged he cannot guarantee that Victoria will maintain its AAA credit rating as the state's debt soars in the wake of two coronavirus lockdowns and widespread job losses. 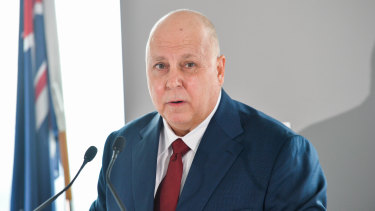 Treasurer Tim Pallas presents the Victorian budget last Tuesday. He said the state is borrowing to make “a quicker and stronger recovery”.Credit:Joe Armao

The Victorian government will plunge the state into record levels of debt and deficit, spending an extra $49 billion in the coming years in an effort to drag the state out of the disastrous COVID-19 recession. The massive spend will take the government’s net debt to nearly $155 billion within three years, more than 28 per cent of Victoria's total annual economic output.

International credit agencies have reacted coolly to the record level of debt and foreshadowed a review of the state's AAA credit rating. If Victoria is stripped of its top credit rating, lenders will likely charge the state a higher rate of interest.

Victorian Treasury Secretary David Martine, who also fronted the committee on Tuesday, said government modelling showed the cost of Victoria potentially losing its AAA credit rating could be up to $10 million per year.

Mr Martine said the increased interest repayment if Victoria's rating was to drop to the second-highest level of AA+ would be between $1.9 million and about $10 million per year.

"The rates are incredibly low at the moment and the spreads are even lower," he said.

Mr Pallas said he could not say whether Victoria would retain its AAA rating, adding it was a matter for the credit rating agencies.

Big rating agency Standard and Poor's put Victoria's AAA rating on a negative credit watch in August (the only state to attract that action) and last Tuesday reiterated its view from that time that there was "a one-in-two likelihood that we will lower our rating on Victoria".

"This could occur if we consider the state's fiscal repair would be delayed beyond our current expectations or if our view is that the state's financial management has weakened," the agency said.

S&P usually resolves its position on whether to act on a credit watch within three months meaning a decision on Victoria's credit rating would be due soon.

He said the government was spending "considerably" more to encourage uptake of electric vehicles than the $30 million it expected to raise through the tax. "This is about fairness," he said.

Mr Pallas said a key focus of the state government was to boost the social and economic wellbeing of young people, women and those in insecure work who have been hit hardest by the recession.

The state's economy would not rebound as quickly as possible unless unemployed people were supported to return to the workforce by a range of government subsidies and programs announced in the budget, he said.

Victoria's economy has shrunk by 2.3 per cent per capita this year, the worst decline since the 1990-91 recession and 13.2 per cent of jobs have been wiped out in the CBD and surrounding suburbs, according to the Australian Bureau of Statistics.

The government has set an ambitious target of creating 400,000 jobs in the coming five years.

"That is not just motivated by a desire to do the right thing by these individuals. It's also motivated by the fact that a depressed participation rate in our labour market arguably means that our economy is massively under-utilised," he said.