The business tycoon, 73, said he believed too many remote workers seem to be "enjoying" their time away from the workplace. 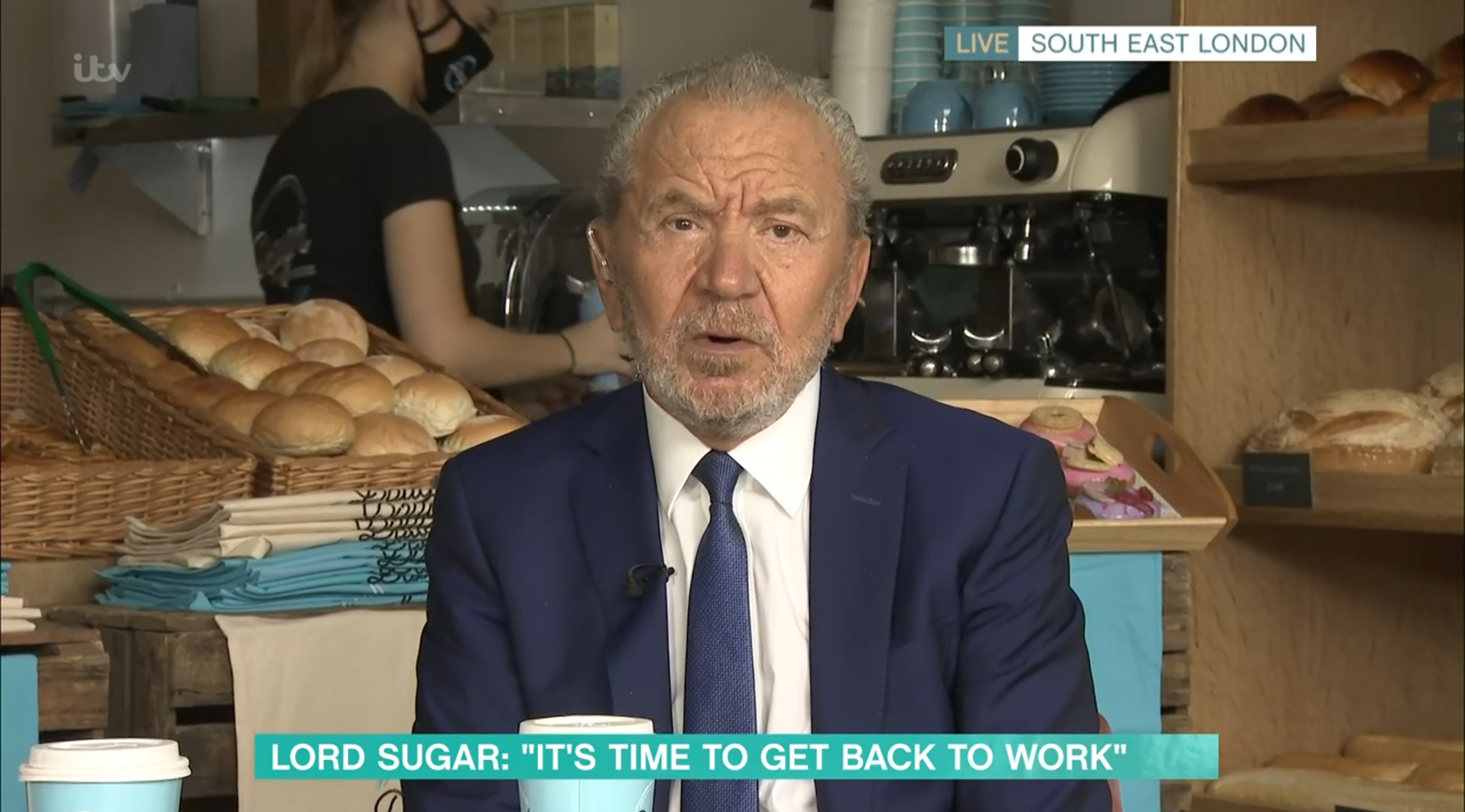 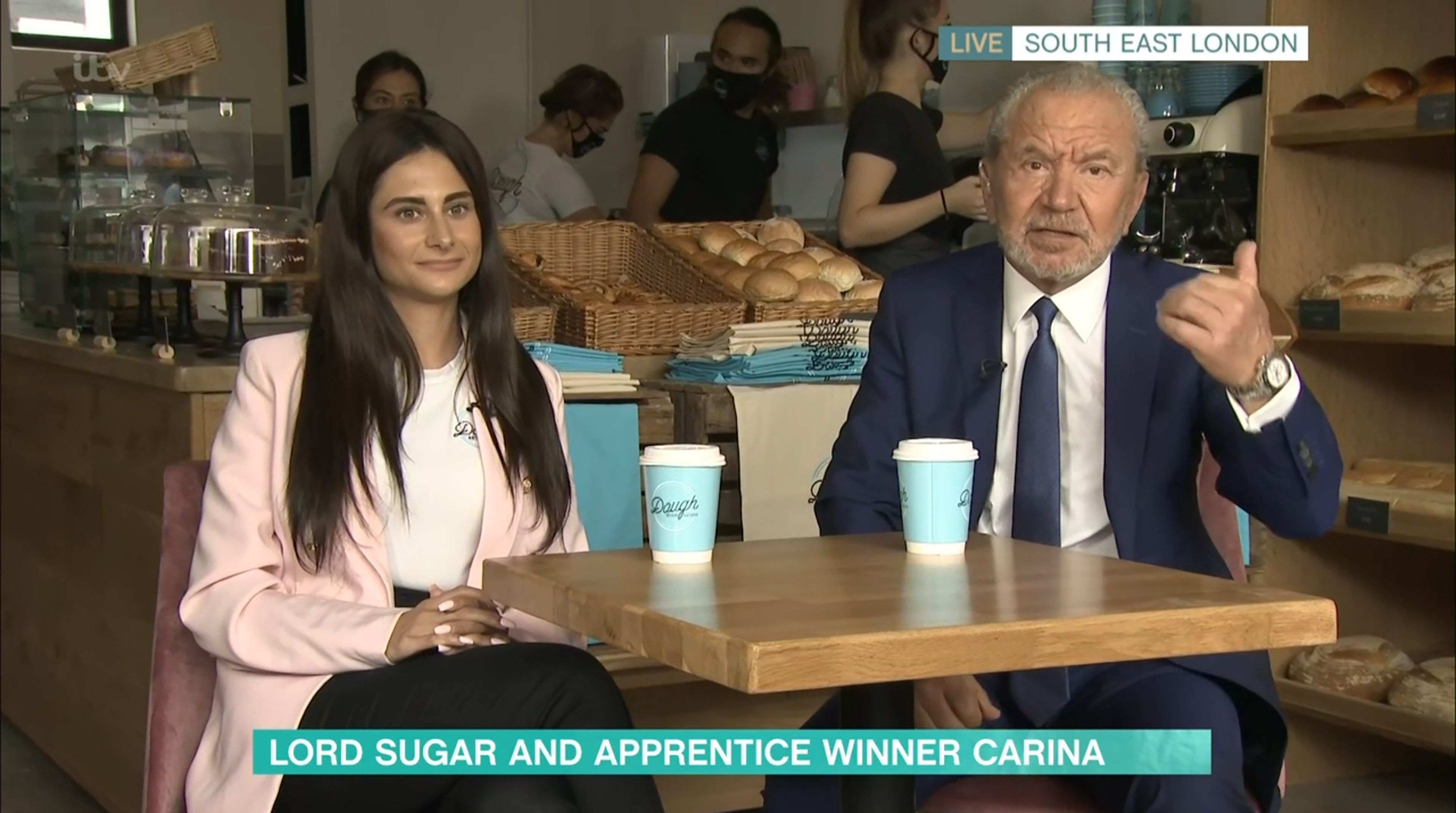 And he urged people to return to offices now so they can "get back to some sort of normality."

The Apprentice star was speaking on This Morning alongside the show's 2019 winner Carina Lepore.

He said: "Those people who like working from home have become a bit complacent, I think, quite honestly. My businesses have all come back.

"I think there's a fine line of fearful and enjoying it, to be honest with you. It's as simple as that. What are they fearful of?"

He then added: "I've got a factory down the road from here that has 300 people that have been working all throughout the pandemic.

"We have got proper processes in place."

Lord Sugar was speaking just days after Boris Johnson urged Brits to get back to work now.

And after the peer wrote in The Sun how the economy and "our kids’ futures" depended on things getting back to normal. 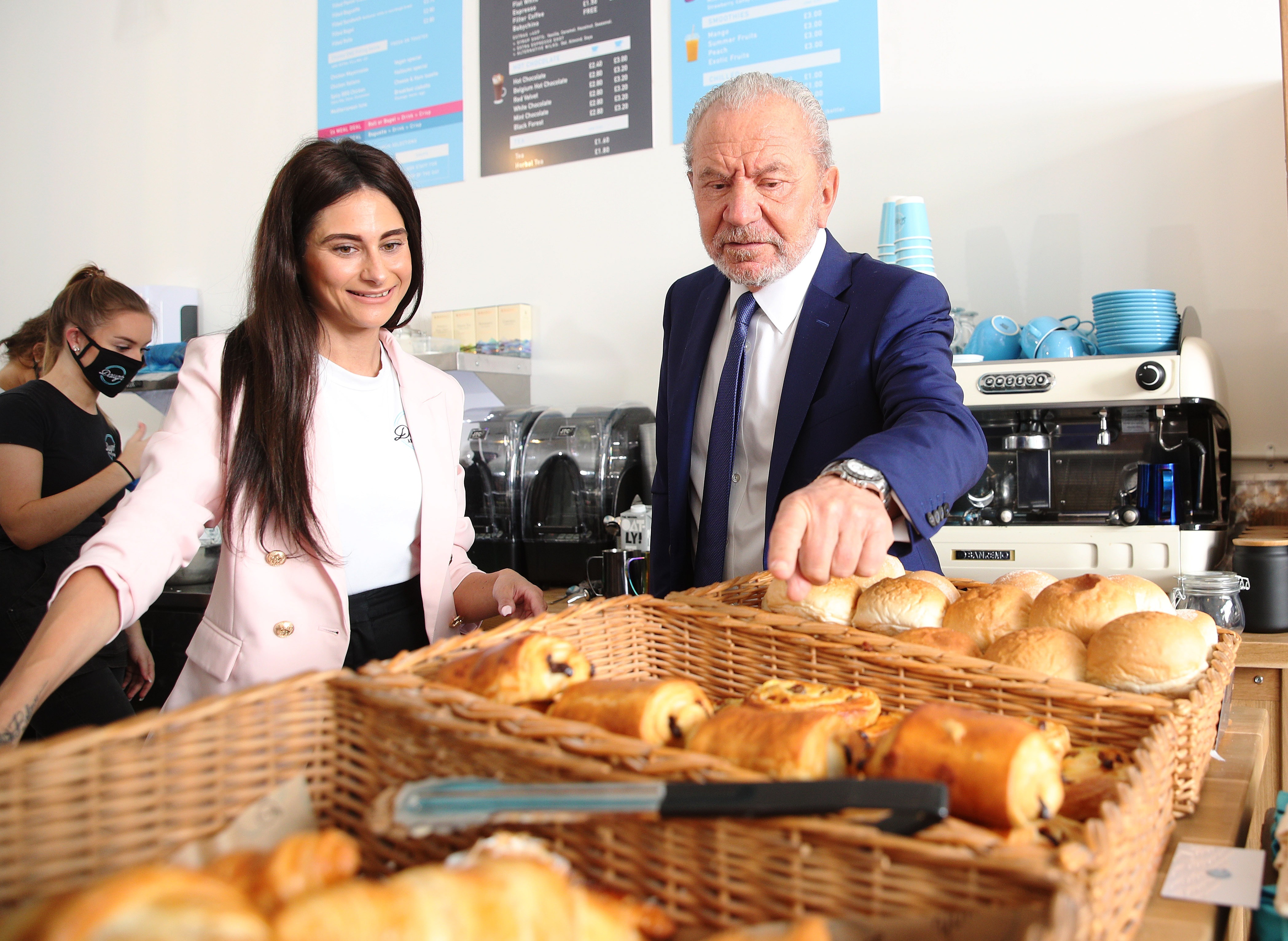 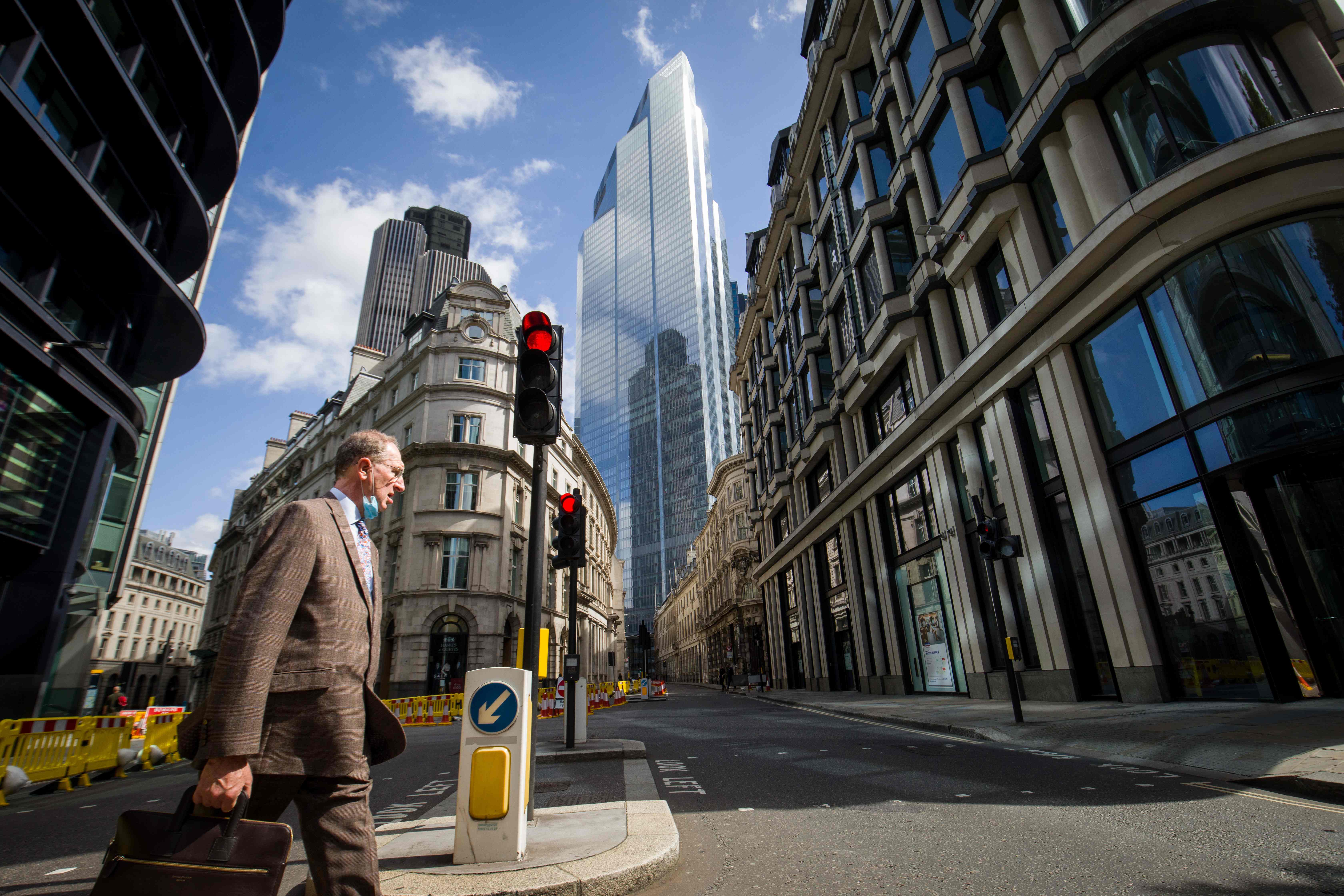 He pointed out then: "My people want to be at work, they enjoy talking to their friends and colleagues to discuss what’s going on with the football, what’s on telly, who’s going to win The Apprentice – all that type of stuff.

"Younger people who work for me look over their shoulders at the more experienced employees and are trained by them.

"They learn almost subconsciously by simply listening in on the conversations of others.

"We are teaching them all the time. How’s that going to ­happen if you’re with a ­company that’s working from home?"

The PM is pushing ahead with plans to say to employers it's now up to them if they want to get employees back into the workplace – despite concerns over a spike in infections.

Last week he told his Cabinet that "people are going back to the office in huge numbers across our country and quite right too."

He added "bit by bit this incredible country is getting back on its feet and recovering from this crisis."

Lord Sugar today also hit out at "unfair" criticism of the Government's response to Covid-19, hailing the Chancellor's economic reaction to the crisis.

He said he believes Rishi Sunak has done a "good job in the circumstances".

Lord Sugar told PA: "I think the Chancellor a done very well generally, and I say that as someone who is not exactly a supporter of the Government.

"There have been a lot of people saying how costly it has been and giving them stick, but I think that's unfair to be honest. 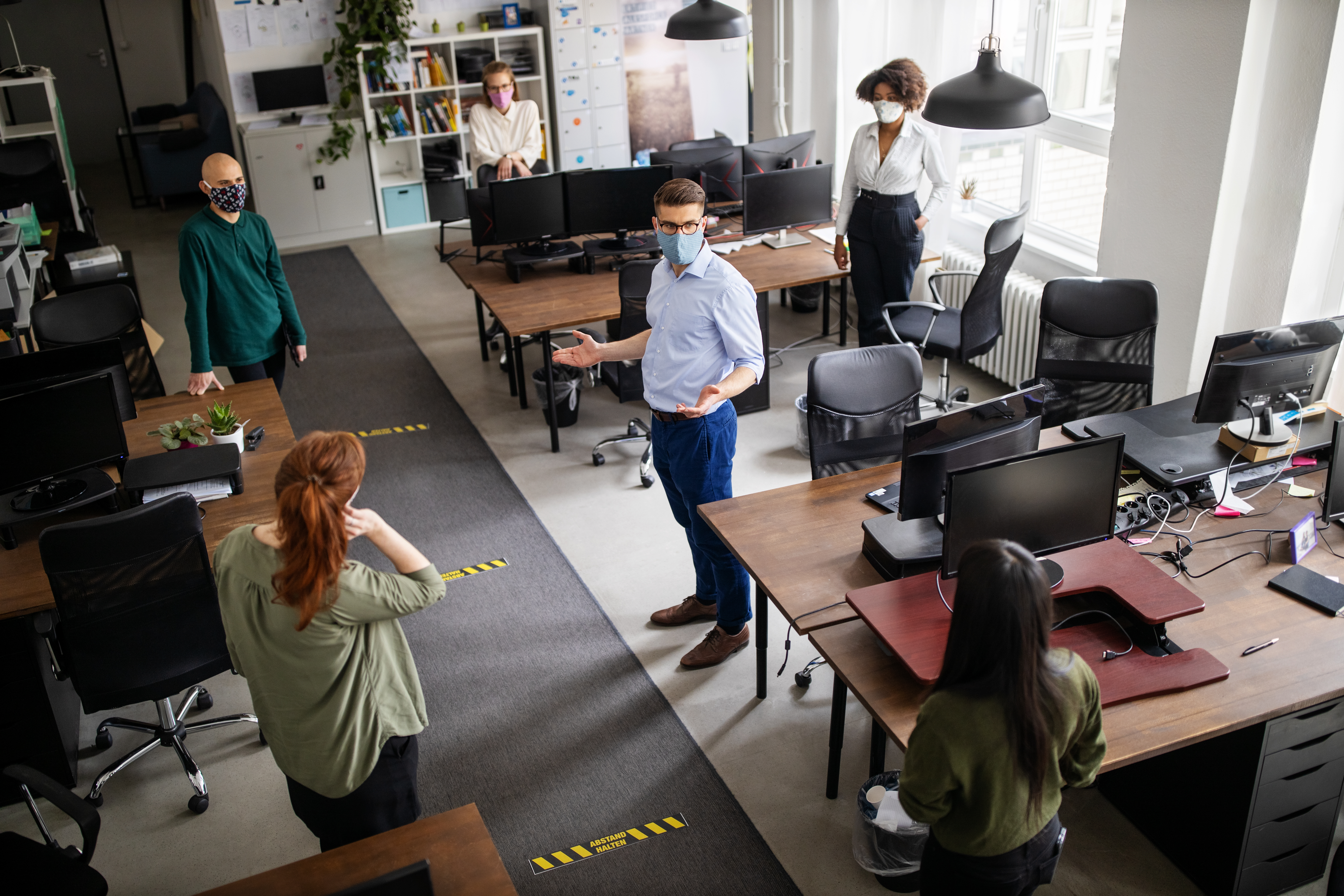 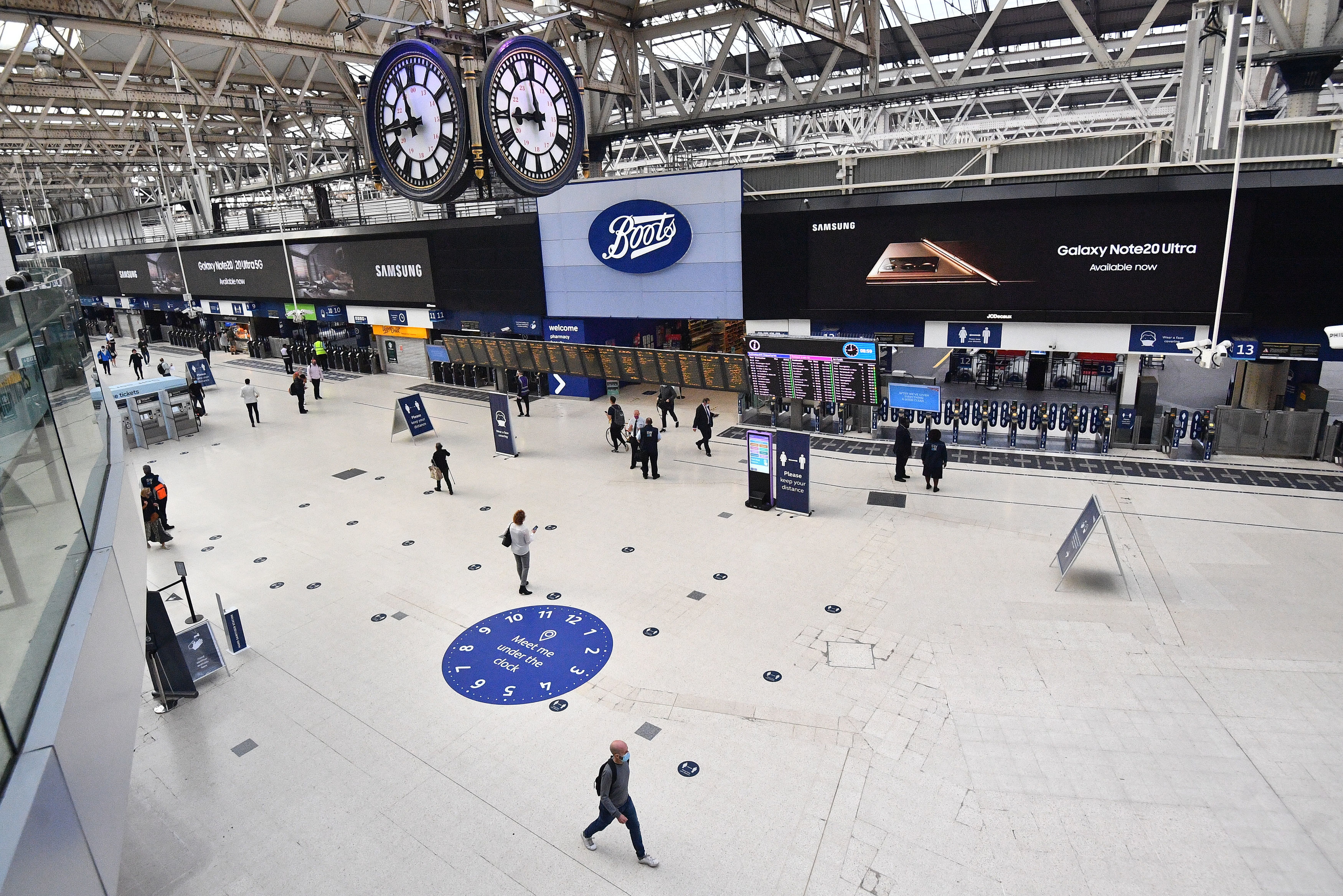 "But I do think they need to demand that people come back to offices and support the city, support the economy.

"The City is suffering as there are no workers there, so until they really push to get more people there it will continue to look like a ghost town."

The impact of the coronavirus pandemic has caused to millions to work from home, while the latest series of The Apprentice was also cancelled.

The cross-bench peer said there was "no way" they could film a series in 2020 due to the disruption caused by the crisis.

His comments came as he opened the second branch of Dough Bakehouse, the bakery business run by Lepore, in Beckenham, south London.

He said the company hopes to open another site in Brixton around the turn of the year, with hopes to have six sites by the end of next year.

"It's a food business so has obviously had a tough challenge with the virus, but Carina has been intelligent to get the business in a great place," he said.

"The plan was always to open more branches and we'll keep moving forward, continuing to focus on South London for now."