London stock markets opened flat today after the Chancellor set out a £9billion support package in a bid to help the economy.

The FTSE 100 index of Britain’s largest companies was trading at 5,823 this morning, the same level it had closed at yesterday which was a fall of 1.3 per cent.

It came after shares in most parts of Asia advanced overnight, cheered by a modest rally on Wall Street and rising hopes for fresh stimulus for the US economy.

But in London, Rishi Sunak said the virus’s resurgence poses a threat to the UK’s ‘fragile’ economic recovery.

The UK’s national debt hit a new record at the end of August, the latest figures show as the country’s embattled public sector borrowed another £35.9 billion. Debt hit £2,023.9 billion, just weeks after passing £2 trillion for the first time ever in July.

It comes as both central and local Government is investing billions of pounds in trying to help people and the economy through the chaos caused by the crisis.

Some 6,634 new Covid-19 cases were recorded yesterday – the largest daily count since the beginning of the coronavirus pandemic.

FTSE THIS WEEK: The FTSE was trading at 5,823 this morning after it opened roughly flat

FTSE THIS YEAR: The stock market has taken a massive hit this year amid the Covid-19 crisis

Mr Sunak, admitting his Job Support Scheme may not prevent rising unemployment and businesses going to the wall, said ‘lives can no longer be put on hold’.

He told MPs it was everybody’s responsibility to defeat coronavirus as ‘the cost is paid by all’ and defended steps taken to reopen the economy over the summer.

He said: ‘We did these things because life means more than simply existing. We find meaning and hope through our friends and family, through our work and our community.

‘People were not wrong for wanting that meaning, for striking towards normality, and nor was the Government wrong to want this for them.’

Mr Sunak added: ‘The truth is the responsibility for defeating coronavirus cannot be held by Government alone. It is a collective responsibility shared by all because the cost is paid by all.’ 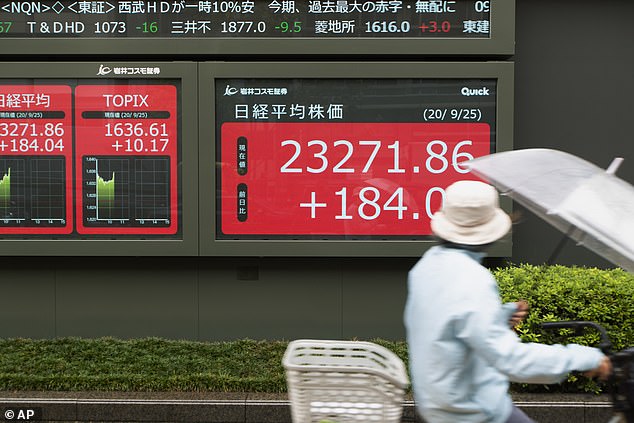 DOW JONES THIS WEEK: The Dow Jones Industrial gained 0.2 per cent to 26,815 yesterday

He said the new scheme – which will see the state top up the wages of workers forced to cut their hours due to the pandemic – is aimed at protecting ‘viable’ roles once the furlough scheme ends and argued it would be ‘fundamentally wrong’ for people to be kept in jobs that can only exist due to state funding.

Despite signs of a global economic rebound in the third quarter, worries remain the upturn may be running out of steam.

In the US, House Democrats said they are paring back their proposal for a new stimulus package in an attempt to jump-start negotiations with the Trump administration.