London lockdown revolt: Boris Johnson warned by backbench MPs and Tory candidate for mayor Shaun Bailey that putting the capital in highest Tier 3 would be a ‘disaster’ that destroys its economy

Boris Johnson has been warned by furious London Tories that it would be an economic  ‘disaster’ if the capital was hit with the toughest possible coronavirus restrictions after lockdown ends.

City MPs and the Conservative candidate for mayor, Shaun Bailey, sent the Prime Minister a clear warning after it emerged officials could place the metropolis into the top Tier 3 after December 2.

They warned such a move could cripple London’s entertainment and hospitality industries, with pubs and restaurants open for takeaway and delivery sales only and theatres and other venues remaining closed.

None of London’s boroughs have a Covid-19 infection rate below 100 cases per 100,000 people, according to Public Health England figures.

But speaking to business leaders via Zoom last night, Mr Bailey said: ‘I absolutely agree it would be a disaster for London if we were in Tier 3. 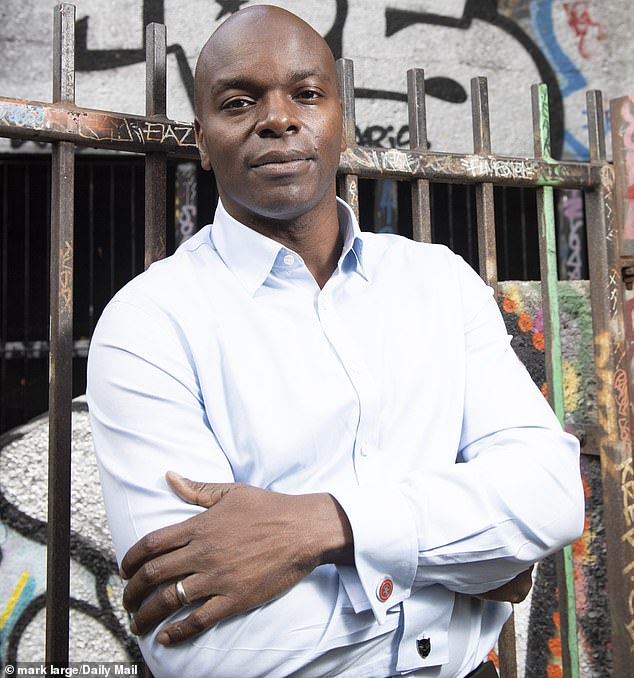 Speaking to business leaders via Zoom last night, Mr Bailey said: ‘I absolutely agree it would be a disaster for London if we were in Tier 3’ 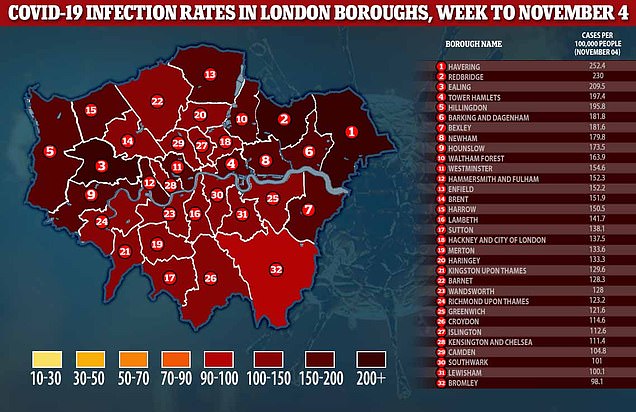 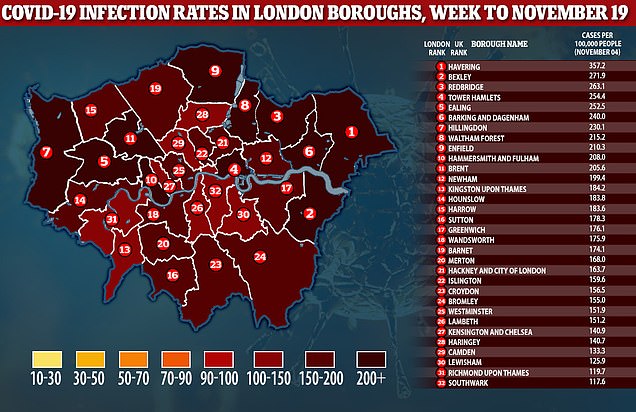 London’s infection rates have increased during November, according to figures from November 4 (left) and November 19 (right). Scroll to see the change 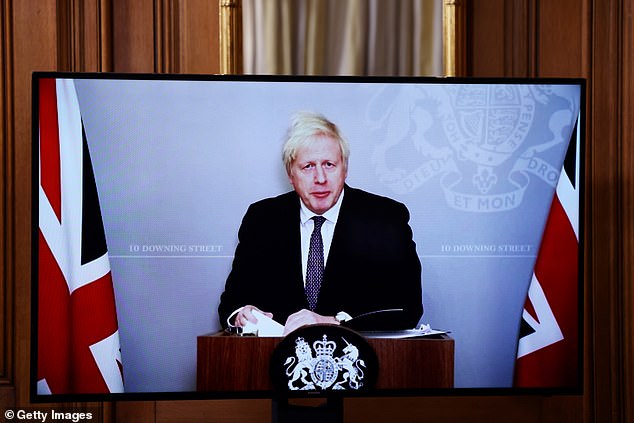 ‘I’m privately making the case that to get our economy moving, and I mean the country not just London, London cannot be in Tier 3. If we are, many businesses will just collapse.” Which puts Downing Street in a fairly tricky position if the capital does end up going into the top tier.

Hull, the North West and other parts of England badly hit by Covid are expected to be placed under Tier Three when the national lockdown ends on December 2.

Boris Johnson will set out which tiers local authorities will fall into on Thursday, but he warned that ‘most’ places are likely to fall under tougher restrictions which could have to remain in place until at least March 31 — more than a year after the first lockdown began.

Debate rages on over which bracket London should be in under the new system, with the capital’s mayor Sadiq Khan predicting the city will face Tier Two — which bans mixing indoors with other households.

But senior Tories including Sir Ian Duncan Smith last night demanded the city, the beating heart of the UK’s economy, is put under Tier One.

Insisting that after lockdown ends, ‘London must be put into Tier 1,’ he added: ‘London is dominant in the economy and we need it to get back to work immediately.’

Mr Khan told LBC yesterday: ‘It’s a bit early to say yet, but based on the numbers that I’ve seen, which is a slowdown in the virus spreading, it’s coming down in parts of London in a couple of boroughs.’

‘What I hope would happen is … London would probably be in what is called Tier Two.’

MPs have warned Mr Johnson that putting swathes of the country under draconian Tier Two and Three restrictions will be ‘catastrophic’ for businesses and spark a damaging new mutiny.

Ministers insist they are waiting for the latest local infection data to decide what brackets individual areas will be placed into, with the breakdown set to be published on Thursday.

However, senior Conservatives say the ‘mood music’ is that most places will be subject to the tougher levels – meaning heavy restrictions on bars and restaurants, as well as limits on households mixing.

The burgeoning row comes amid frantic efforts to thrash out a UK-wide approach that will allow some kind of family Christmas, with the PM locked in talks with Scotland, Wales and Northern Ireland.

An announcement that restrictions on socialising will be relaxed for a few days over the festive season – probably December 23-27 – had been expected today, but might now come later in the week, as sources say ‘details need ironing out’.

Mr Johnson yesterday confirmed that the blanket lockdown in England will end as scheduled next Wednesday, but cautioned that coronavirus curbs need to stay in place until Easter despite more good news on vaccines.

He added: ‘This is not the moment to let the virus rip for the sake of Christmas parties’.

Can I go to the pub? Will there be a curfew? Are gyms allowed to open? Your questions answered as Boris Johnson reveals his post-lockdown plan for England

Will the lockdown end next week?

Yes. Boris Johnson has confirmed today that the lockdown will end on December 2 – next Wednesday – and it is thought this will come into effect at 00.01am that day.

What will replace the lockdown?

The lockdown will be replaced by a system of regional restrictions in three tiers, which is expected to last until the end of March 2021.

Can you see friends outdoors again?

Yes. The Prime Minister said that from next Wednesday, anyone will be allowed to leave their home for any purpose and meet others in outdoor public spaces, subject to the rule of six.

What else will return?

He added that personal care, gyms and the wider leisure sector can reopen.

Will nail salons and hairdressers be allowed to open?

Yes, nail salons and hairdressers will be allowed to reopen, falling under the ‘personal care’ sector.

Can non-essential shops open in all three tiers?

Yes. Mr Johnson has confirmed all shops can reopen, whatever tier their area is placed into, in what is a major boost for retailers during the festive period.

Can I go to church again – and are weddings back on?

Yes, church services will be allowed to resume – as well as weddings, with further details to be announced.

Will I be able to attend sports events?

Yes, with restrictions. Mr Johnson said that spectator sports in tiers one and two will be free to resume inside and outside with capacity limits and social distancing, ‘providing more consistency with indoor performances in theatres and concert halls’.

Areas that will go straight into tier three however will still have to adhere to a ban of attending sporting events for all fans.

What will this mean for working from home?

Mr Johnson said people in tier one should work from home wherever possible. This is different to the more relaxed arrangement under tier one before lockdown.

Will pubs in tier two be allowed to stay open?

Yes, with new restrictions. Alcohol may now only be served in hospitality settings as part of a ‘substantial meal’.

This is different to before, when all pubs were allowed to stay open in tier two, whether or not they served food.

Will pubs in tier three be allowed to stay open?

No, apart from takeaways. Mr Johnson has ordered the closure of indoor entertainment, hotels and all forms of hospitality, except for deliveries and takeaways.

This is different to before, when tier three pubs could open but only when serving alcohol as part of a ‘substantial meal’.

Will the 10pm curfew rule be eased?

Yes, Mr Johnson has unveiled a plan so that while last orders must be called at 10pm, people will get an extra hour to finish their food and drinks, with opening hours to be extended until 11pm.

When will you know which tier your area will be put in?

This Thursday, when Ministers will announce which tier each area will enter based on scientific analysis of the local prevalence of Covid-19.

Will rules within tiers vary between areas?

No, the Prime Minister said tiers will now be a uniform set of rules. There will be no negotiations on additional measures between each region.

Will my area still be in the same tier as before?

Not necessarily. More areas are expected to enter the higher end of the tiered-system next month, the Prime Minister said.

Can I see my family at Christmas?

Possibly. Mr Johnson has set out the basis of plans to allow a small number of households across the UK to mix over a limited number of days around Christmas.

He has not yet given the specifics and said families will need to make a ‘careful judgement’ about visiting elderly relatives over Christmas.

The PM told MPs: ‘This virus is obviously not going to grant a Christmas truce, it doesn’t know it’s Christmas and families will need to make a careful judgement about the risk of visiting elderly relatives.

‘We will be publishing guidance for those who are clinically extremely vulnerable on how to manage the risks in each tier as well as over Christmas.’

Can I see my family at Christmas if they don’t live in England?

Mr Johnson said the Government is working on a time-limited Christmas dispensation with the devolved administrations.

He told the Commons: ‘I can’t say that Christmas will be normal this year, but in a period of adversity time spent with loved ones is even more precious for people of all faiths and none.

‘We all want some kind of Christmas, we need it, we certainly feel we deserve it. But what we don’t want is to throw caution to the winds and allow the virus to flare up again, forcing us all back into lockdown in January.

‘So to allow families to come together, while minimising the risk, we’re working with the devolved administrations on a special time-limited Christmas dispensation, embracing the whole of the United Kingdom.’

How will rapid testing be rolled out – and who will get it first?

Mr Johnson said rapid testing will be used by the end of the year to allow every care home resident to have two visitors who can be tested twice a week.

He also told MPs: ‘Care workers looking after people in their own homes will be offered weekly tests from today. And from next month, weekly tests will also be available to staff in prisons, food manufacturing and those delivering and administering Covid vaccines.’

Mr Johnson said testing will enable students to ‘go home safely for Christmas’ and return back to university.

What is happening with the testing system?

Mr Johnson  said daily testing will also be used as part of attempts to ‘end automatic isolation’ for close contacts of those testing positive for Covid-19.