Paris: Valery Giscard d'Estaing, a former president of France who set the European monetary union in motion, fathered the first draft of the European Union's Constitution and helped create the Group of Eight (G8) forum, has died. He was 94.

A spokeswoman for the office of the French presidency confirmed his death via a text message Wednesday evening, without elaborating. Giscard, who led the nation from 1974 to 1981, was France's youngest 20th century president.

"Let us dream of Europe!" Giscard said in a speech to the Convention on the Future of Europe in February 2002. "Let's imagine a pacified continent, free from its dividing walls and its barriers, where history and geography will finally be reconciled, so as to allow all nations to build up their future together." 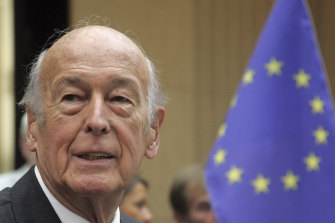 Former French President Valery Giscard d’Estaing, with an EU Flag at right, attends the debate of the new European constitution at the German Upper House Bundesrat in Berlin.Credit:AP

As president, Giscard worked with German Chancellor Helmut Schmidt to launch the European Monetary System, which had fixed pegs between the region's currencies before monetary union and the euro. The EMS became operative on March 13, 1979.

In 1975, he invited leaders from six industrialised nations to Rambouillet, near Paris, to discuss the energy crisis, putting into motion what would become the G8, consisting of Canada, France, Germany, Italy, Japan, Russia, the UK and the US.

Almost three decades later, he wrote a 1037-page draft for a European constitution that boosted the democratic legitimacy of regional institutions to satisfy "the desire for unity of the European continent." 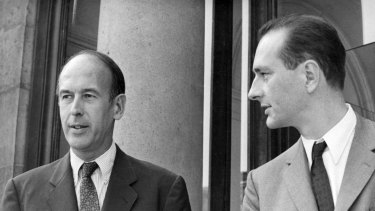 Elected president at the age of 48, he sought to modernise French society by legalising abortion, making divorce easier, dropping the age of majority to 18, and ending censorship of films and television. However, France's last executions were carried out under his rule.

His reputation was later tarnished by rising unemployment and by his acceptance of gifts from an African dictator. He lost his re-election bid to Francois Mitterrand, France's first Socialist president.

Giscard was the third president of the Fifth Republic, the new regime inaugurated in 1958 in a referendum promoted by Charles de Gaulle. The Fourth Republic, which had emerged from World War II, collapsed amid political instability over Algeria's war of independence. 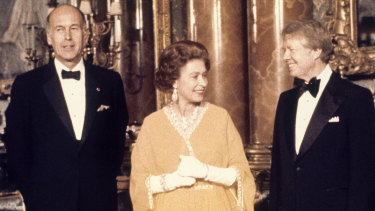 Valery Giscard d’Estaing, left, with Queen Elizabeth II and then US president Jimmy Carter at Buckingham Palace in 1977.Credit:AP

Valery Marie Rene Georges Giscard d'Estaing was born in Koblenz on February 2, 1926, when French troops were occupying the German city after World War I. The son of a civil servant, Giscard was educated in Clermont-Ferrand, in the central region of Auvergne, as well as in Paris. He was decorated for service with the Free French Army during World War II.

After completing the Ecole Polytechnique and the Ecole Nationale d'Administration, the institutions that train the highest ranks of the French political elite, he joined the Inspection Generale des Finances in 1952. Four years later, he was appointed deputy director to the Office of the Minister of Finance.

In 1956, Giscard was elected to the National Assembly, France's chamber of representatives, and served as a secretary of state for finance from 1959 to 1962. At 36, he became France's youngest minister of finance and economic affairs, holding that post from 1962 to 1966.

In 1974, he defeated Mitterrand and became president in the elections that followed the death of Georges Pompidou.

In the mid-1970s, the 30-year postwar boom of the French economy, a period known as "the Glorious Thirty," ended and France entered a prolonged crisis. Immediately after Giscard came to power, the first oil shock prompted a recession in Western Europe.

In a 1981 presidential re-match, Giscard was defeated by Mitterrand after revelations that the incumbent had received diamonds from Central African dictator Jean-Bedel Bokassa while finance minister. The scandal became known as the Diamonds Affair.

"No king of France would have been re-elected after seven years," Giscard said when he lost his bid for a second term. He returned to the National Assembly and became one of the leaders of the Union for French Democracy, a centre-right group.

In December 2001, he was appointed chairman of the Convention on the Future of Europe. In November 2002, he sparked a furore after saying that Turkey wasn't a European country and that its entry would be "the end of the European Union". He said that those who backed Turkey's candidacy were "the adversaries of the European Union".

Giscard was ambivalent about the EU bringing in new members in Eastern Europe between 2004 and 2007, calling for the original Western members to forge closer ties — a precursor to the "two speed" EU that subsequent French presidents have at times promoted.

In December 2003, Giscard was elected to the Academie Francaise, on the same chair of Leopold Sedar Senghor, the first president of the Republic of Senegal and a major French-speaking poet of the past century.