Criminal and family violence cases waiting to be finalised by the Magistrates Court have doubled in number while matters to go before the state administrative tribunal are up more than 100 per cent after coronavirus wreaked havoc on Victoria’s courts.

About 200,000 cases are pending in the state’s courts, partly due to the impact of the pandemic on the legal system.

Lawyers are calling for urgent funding from the Andrews government to deal with the delays.

The number of pending cases before the high-volume Magistrates Court has doubled for criminal matters and increased by 45 per cent for family violence cases to 145,464, figures from the Department of Justice and Community Safety show.

And more than 20,000 cases are pending before the Victorian Civil and Administrative Tribunal – a 139 per cent increase on its normal volume of upcoming hearings.

The Children’s Court and the Coroners Court have experienced almost a 30 per cent jump in pending cases, to 14,249 and 5435. The Supreme Court has about 5000 cases pending, a 3 per cent increase. In the County Court, the number of jury trials awaiting a start has reached 1611, according to figures from the court; about half are cases that were pending at March last year, when jury trials were suspended.

Criminal Bar Association chair David Hallowes, SC, said the suspension of jury trials (which have now restarted) meant cases could take up to two years to be heard before the County Court.

He said this affected people who may have been wronged, people accused of crimes and witnesses whose memories could fade over time, and contributed to alleged perpetrators having a greater chance of being bailed while they await trial.

“It might be a hackneyed phrase, but justice delayed is justice denied,” Mr Hallowes said.

Law Institute of Victoria president Tania Wolff said the delays were unavoidable in a pandemic.

“It’s understandable given where we’re at,” she said, “but it’s also concerning. It’s going to take years before we recover and get back to something more manageable.”

Mr Hallowes and Ms Wolff said the courts had adapted to the difficult situation, instigating measures such as online hearings, but immediate funding was needed from the state government to make a real impact on the delays. 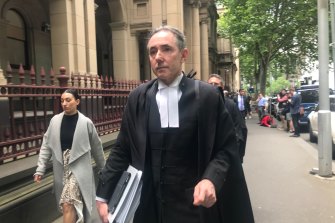 Ms Wolff said the Magistrates Court backlog could also be addressed by diverting, for example, homeless people who have not paid fines away from the criminal justice system and towards support services instead.

The government announced more than $80 million to increase the courts’ capacity during the pandemic.

A Department of Justice spokesman said on Tuesday that the pandemic had far-reaching impacts.

“Courts are no exception to that, with many areas seeing significant increases in pending cases,” he said. He said the department was working closely with the courts on immediate ways to tackle the backlog, but it would take time for things to return to normal.

Criminal lawyer Ben Watson, of Stary Norton Halphen, said he was seeing delays of up to nine months to deal with interim intervention orders. Before the pandemic, he advised clients that their first hearing after an order was made would be about two weeks away.

Interim orders are often used to keep family violence perpetrators out of homes and away from their children.

”This is a balancing act between protection of affected family members and the importance of that, and ensuring the rights of the respondent are considered, particularly when conditions cannot be amended for a long period of time,” Mr Watson said.

Community lawyer Paul Kidd said it was difficult to advise clients they had the right to contest an application but it was unlikely to happen for a long time, possibly longer than if they consented to an order being in place.

Felix Ralph, of C. Marshall & Associates, said it was often easier for his clients to just accept an order rather than contest it, as the wait time was longer.

“It’s a very difficult position for lawyers to explain the realities with what really is a system that has been stretched to the outer limits of what’s acceptable,” Mr Ralph said.