Latvian MPs have declared Russia a ‘state sponsor of terrorism’ and described its war in Ukraine as a ‘targeted genocide against the Ukrainian people’.

The statement passed in Riga today ‘recognises Russia as a state sponsor of terrorism, and calls on other like-minded countries to express the same view’.

MPs in the Baltic state, which borders Russia, said they considered ‘Russia’s violence against civilians committed in pursuit of political aims as terrorism’.

They also condemned its use of cluster munitions ‘to sow fear and indiscriminately kill civilians’.

Putin’s forces are using ‘suffering and intimidation as tools in its attempts to demoralise the Ukrainian people and armed forces and paralyse the functioning of the state in order to occupy Ukraine,’ they added. 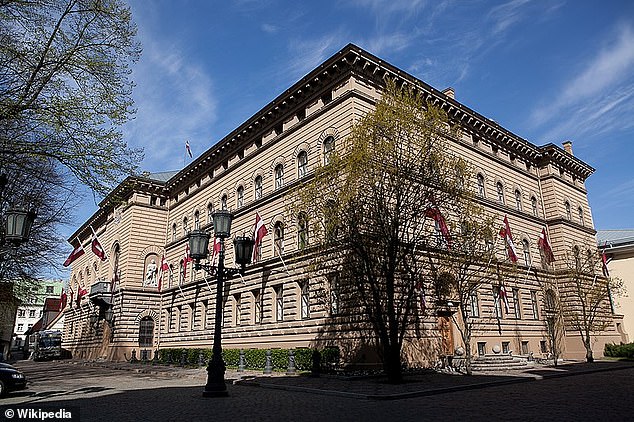 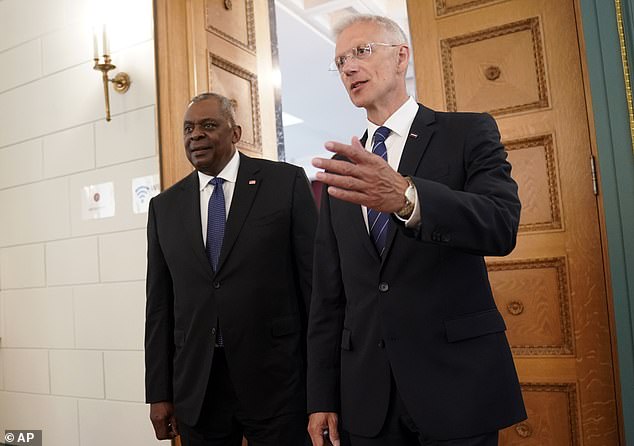 US Secretary of Defence Lloyd Austin appears alongside Latvian PM Artur Krisjanis Karins during a visit to the Baltic states on Wednesday. The US currently has 500 troops in Latvia

Lawmakers in Riga also urged the European Union to stop issuing tourist visas for Russian and Belarusian citizens and to cut down on entry visas in general.

They said Russia’s invasion was carried out ‘with the support and involvement of the Belarusian regime’ and called on the international community to impose the same sanctions adopted against Russia on Belarus.

The striking statement came a day after US defence secretary visited Latvia and suggested the US may bring in additional trips from America.

Lloyd Austin said alongside Latvian PM Arturs Krisjanis Karins yesterday morning: ‘We will enhance our rotational deployments in the region and intensify our training with our Baltic allies to further strengthen our combat credible posture in the region.’

The US currently stations 500 troops in Latvia, a small chunk of its 100,000 on the continent.

There were 100 in place in December, with movements prompted by Russia’s invasion of Ukraine.

Krisjanis Karins added that the country was working closely with the US and boosting its defence budget in response to the looming Russian threat.

‘Now that Russia is waging a brutal war in Ukraine, the US and we are united, working on strengthening NATO and providing support to Ukraine,’ Karins said.

It comes as Republicans, Democrats and President Zelensky have called on Biden to declare Russia a ‘terrorist state’.

‘This designation would be a nightmare for Russia,’ said Graham.

‘It would be an encouraging event for the people of Ukraine, and more importantly it would be a statement to the world that the United States, in a bipartisan fashion when it comes to Russia, is not forgiving and not forgetting.’

Zelensky said in an address last month: ‘We need to act immediately and do everything to make Russia stop the killings of children, people, everyone.

‘Who among you does not agree that this is terrorism?’

Secretary of State Antony Blinken has said he is bound by legal criteria and that the label would make little practical difference as Moscow was already subject to stiff sanctions.

‘The costs that have been imposed on Russia by us and by other countries are absolutely in line with the consequences that would follow from designation as a state sponsor of terrorism,’ he told the press last month.

‘So the practical effects of what we’re doing are the same.’