A Labour MP has apologised for handing out campaign leaflets promising would-be voters they will ‘deal with Traveller incursions.’

Shadow women and equalities minister Charlotte Nichols had been delivering leaflets for the Party ahead of local elections in the Orford area of her constituency.

Among the promises listed on the leaflet which featured the Labour Party’s logo was a pledge to ‘deal with Traveller incursions,’ causing widespread anger among residents and on social media.

She later apologised in a statement for the ‘hurt caused’ among the Gypsy, Roma and Traveller (GRT) communities, assuring people it was not in line with her personal views, or that of the party.

She said: ‘I would like to unreservedly apologise for the offence and hurt I have caused to the Gypsy, Roma and Traveller community.

‘I have spoken to the local Labour Party, the leaflet has been withdrawn and the leaflet will be destroyed.

‘I regret that this leaflet has been distributed in the town. The leaflet is not in line with my personal values or those of the Labour Party.’

In an earlier statement following outrage on social media over the leaflet, she said she had not been aware of the ‘problematic definition’ of incursions, which means a sudden invasion or attack. 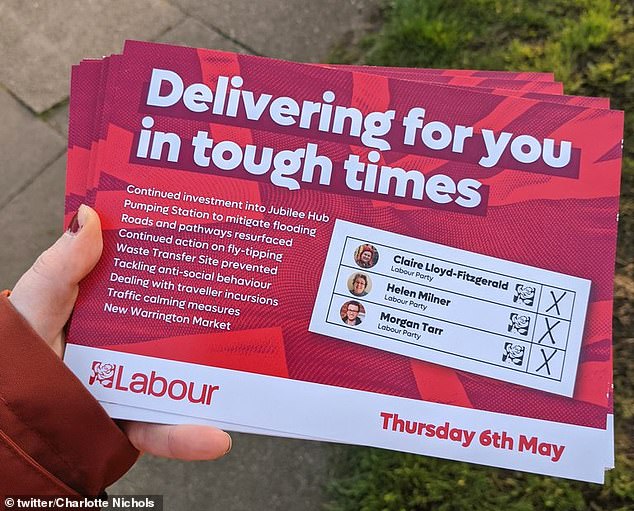 She said: ‘I can understand concerns raised about the language in a recent leaflet, particularly in the context of draconian measures in the Police Crime Courts and Sentencing Bill.

‘The terminology around ‘incursions appears widely used in legal and local government contexts and I wasn’t aware of its problematic definition.

‘I am trying to be an ally to the GRT community, but anti-racism is an active process that means being willing to listen and to learn.

‘I’m more than happy to sit down with community representatives to discuss more appropriate terminology to talk about sensitive issues like these and how we can work together to best ensure the needs of the community are met going forward.’

One social media user said: ‘Really disturbing that you didn’t notice this particular phrase on a list of bullet points – essentially your own pledges

‘That aside, before the leaflet went to print, WHO designed it & signed it off?

‘Who thought ‘Traveller Incursions’ was an acceptable phrase?’

Another added: ‘The leaflet says, under the heading ‘Delivering for you’ that Labour is ‘dealing with traveller incursions’ – regardless of whether you knew the full meaning of the word surely you accept that the ‘you’ here is deliberately, purposefully exclusive of members of the GRT community?’