‘Rebuilt as a socialist fairyland!’ Kim Jong Un praises the North Korean army for repairing the country after it was battered by three typhoons

Kim Jong-un has heaped praise on North Korea’s military for rebuilding villages that were destroyed by recent typhoons as he inspected the soldiers’ handiwork.

The country’s state-run news agency proclaimed that troops had ‘removed all the traces of the natural disaster’ from Kangbuk-ri village, in the southwest of the country, and rebuilt the villages as a ‘socialist fairyland’.

Kim proclaimed that he ‘felt as is he were looking at a different world’ after seeing the new village, ‘which had looked so pitiful for its backwardness plus damage by natural disaster’, KCNA reported. 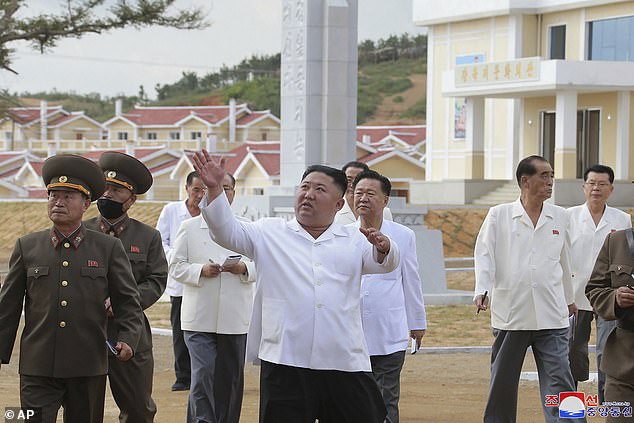 Kim Jong Un praised North Korea’s military as he visited the village of Kangbuk-ri on Tuesday, which had been rebuild after being destroyed by a recent typhoon 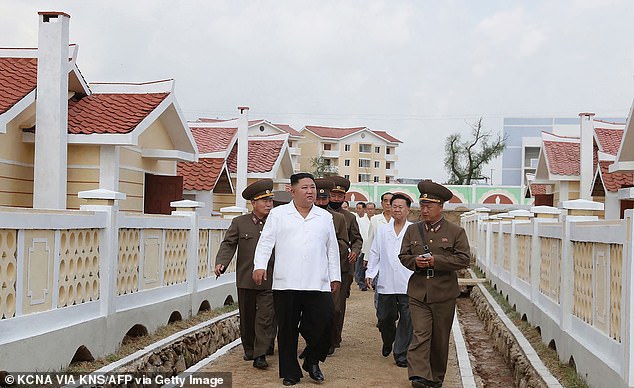 Kim proclaimed that he was ‘looking at a different world’ after seeing the rebuilt village, which state media described as a ‘socialist fairyland’

North Korea has been hit by three typhoons in recent weeks, damaging vast swathes of the country and flooding farmland, raising fears of a major food shortage.

Having disappeared from public view earlier this year, Kim has made repeated public appearances in recent weeks while taking charge of the rebuilding efforts.

On Saturday he was pictured in Unpa county, in the south of the country, as he stripped to his undershirt to give ‘guidance’ to workers repairing the storm damage.

Kim was shown in a field with several of his lieutenants, inspecting rice crops as he ordered locals to tap into food stockpiles to ensure everyone had enough to eat.

Speaking after Tuesday’s visit, Kim said: ‘The People’s Army is made up of creators of all miracles on this land.

‘The genuine might of the People’s Army lies not in the number of troops and the might of ammunitions but in their ardent love for their country.’

North Korea routinely struggles to feed its people, as the country is mostly made up of mountainous terrain where it is difficult to farm. 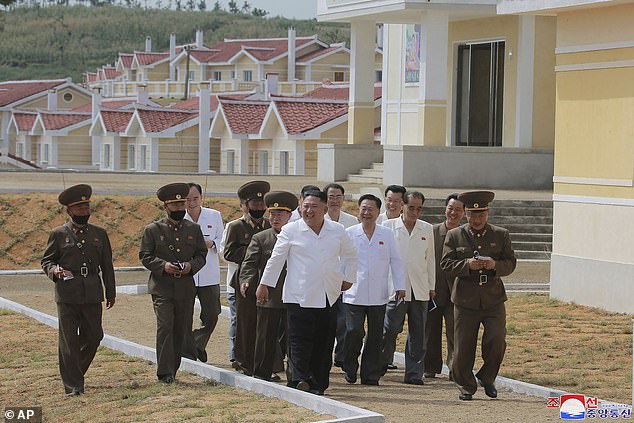 Kim has appeared often in public since the typhoons hit as he leads recovery efforts, after vanishing from view earlier this year amid rumours about his health

A report from the U.S. Department of Agriculture last month found that 60 per cent of the population is ‘food insecure’, meaning they do not have enough food to live an active, healthy lifestyle.

The report was issued even before the recent typhoons, suggesting the country could be heading into a crisis, especially when combined with the effects of coronavirus.

While North Korea has downplayed the extent of the virus to its people, the country is widely thought to be suffering a serious outbreak.

The last time North Korea suffered a major famine was between 1994 and 1996, when up to 3.5million people starved to death or died of ‘hunger-related’ illnesses.

In North Korea, the period was known as the Arduous March, or the March of Suffering.

This summer, North Korea suffered the second highest rainfall in the past 25 years thanks to the typhoons, the weather agency had said on Monday .

The country recorded an average 852.3 mm (34 inches) of summer precipitation throughout the country, more than triple the year earlier, KCNA said.

North Korea’s agriculture sector is particularly vulnerable to severe weather, and this summer’s storms and floods have raised concerns over the country’s food situation.