In his award-winning book No Friend But the Mountains, about his detention on Manus Island, Behrouz Boochani tells of a man who learns his father is dying and asks if he can jump the queue for the phone at the island’s processing centre. Despite the support of other detainees, some of whom offer to forfeit their places for the man, the Australian officer on the ground is adamant: “I understand how you feel, but unfortunately this would be a violation of the rules.”

In the locked-down world of COVID-19 it sometimes seems as if the authorities here, both state and federal, are trying to emulate this approach. The Queensland government recently denied Moe and Sarah Haider access to their newborn child without so much as an explanation, and Horsham woman Sandra Muller has been blocked from visiting her injured husband in intensive care in Townsville. Then there’s the Victorian government’s decision to ban any more than 10 people attending the funeral of eight-year-old drowning victim Cooper Onyett. The federal government has repeatedly blocked the return of three-year-old Viraj Kang from India after 15 months apart from his parents. 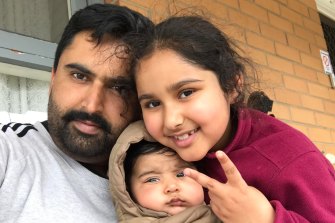 Sikander Kang with his then newborn son, Viraj, in Melbourne in April 2018, and daughter Sehar. Viraj is now three.

This approach has proved popular in COVID times as the image of our leaders as relentless guardians of our health and the borders has provided political rewards. The federal government’s ham-fisted announcement of punishment for Australians attempting to return from India was testament to that. But as The Age argued at the time, this does not make it right.

In this exceptional public health emergency, politicians are fond of appealing to people to use “common sense”. But as some of the reactions to relatively minor restrictions such as mandating QR check-ins or wearing masks have shown, the idea of a broadly shared attitude to what is sensible presumes a great deal. The onus is upon our leaders to communicate better.

An even greater challenge for those making the rules is in situations that are not common. As a result of Australia’s obligations under the Vienna Convention on Diplomatic Relations, foreign diplomats are exempt from hotel quarantine, as are pilots and cabin crew who live in this country and offshore oil and gas workers. More questionable are the exceptions made for celebrities such as Dannii Minogue and Tom Hanks. When Queensland’s Chief Health Officer, Jeannette Young, was asked about allowing Hanks to enter the state in September last year, she defended the exemption by saying people working in film and entertainment are “bringing a lot of money into this state”.

There is also scope in every state for discretionary exemptions to border restrictions on compassionate grounds. Viraj’s Australian father, Sikander Kang, told our reporter Latika Bourke that “we appreciate what Mr Morrison has done to protect citizens inside Australia, but being a developed country we should have done so much better for our citizens stuck outside the country”.

Mr Kang is right, but we would go further. Considerations of monetary and political benefit have their place, but a more responsive, transparent and flexible approach to extreme cases involving spouses and young children is necessary if we are to meet the standard of a civilised society and avoid needlessly damaging relations between individual citizens and government.

If as a nation we are to prove ourselves better than that, it must begin by re-assessing how we deal with those who have a basic human claim to our attention. Only then will we be able to say that we “understand how you feel” and mean it.