London: The British judge hearing Julian Assange's arguments against extradition to the United States has agreed to a request by his lawyers to delay her decision until after the November presidential election.

The timing will bolster the hopes of Assange and his supporters for the extradition request to be dropped if Democratic presidential candidate Joe Biden ousts President Donald Trump.

The Trump administration wants Assange to be tried in the US on 18 spying charges over cables published by the Australian's WikiLeaks website a decade ago. 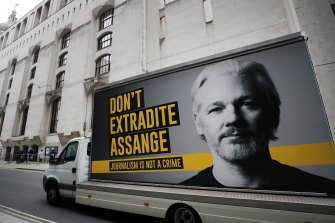 A truck with a billboard of Julian Assange arrives at the Old Bailey court in London during his extradition hearing.Credit:AP

Earlier this week, Assange's fiancee Stella Moris, told this masthead that it if the Democrats were to win, it would be difficult for Biden to be seen to follow Trump's legacy and not that of his predecessor Barack Obama. The Obama administration never charged Assange and the former president commuted the sentence of Chelsea Manning – the former army intelligence officer who provided the documents published by Wikileaks. Biden was vice-president to Obama.

Assange's legal team argues the prosecution mounted by the US Department of Justice is political and would violate his human rights. Its earlier request to delay the hearing had been denied.

The hearing has already been delayed to the coronavirus pandemic and the district judge deciding his case, Vanessa Baraitser, had previously warned the defence not to count on her granting another extension.

"One way or the other my decision is likely to come after the election in the United States," she said, granting Assange's lawyers four more weeks, the prosecution another fortnight and the defence a final 72 hours to respond.

She said her decision would likely be handed down in 2021. She asked Edward Fitzgerald, a lawyer for Assange, whether the defence would use the extra time to submit new evidence – a move the prosecution successfully complained about on Friday.

"If something really absolutely major happens obviously the court has to look at the situation as it is.

"Supposing Trump said 'I'm going to execute all journalists' or something like that then obviously we'd be entitled to draw that to the attention of the court but we accept it would have to be something fairly dramatic," Fitzgerald said.

Fitzgerald argued the court would have to take into account the result of the US election at any rate.

"We can't really avoid that political fact," he said.

The delay means Assange will remain at Belmarsh Prison for at least the rest of the year having previously been denied bail.

Last year, Assange was sentenced to 50 weeks' prison for skipping bail in 2012, when he sought political asylum in the Ecuadorian embassy to avoid being extradited to Sweden, where he was wanted over sexual assault allegations.

On Friday, Baraitser again reprimanded the 49-year-old during proceedings, this time for talking to Moris while the hearing extensions were being discussed. She told him to sit back down in the dock, which is separated from the well of the court by a glass pane.

"It's just not appropriate, you have lawyers in front of you. If you wish to give instructions, then of course, you can."

Later Assange could be seen speaking to Moris through the glass but in the company of his Australian lawyer Jennifer Robinson.