It’s the Platinum After Party! Jubilee revellers make the most of the long weekend as they head out on a third night of celebrations to mark Queen’s 70-year reign

Revellers across the UK headed out to pubs and clubs last night as the Platinum Jubilee weekend entered its third day of royal celebrations.

While millions stayed in to watch the Platinum concert which featured Rod Stewart, George Ezra, Duran Duran and more, plenty of people still went out to party.

The mild spring weather across the country allowed most to enjoy the penultimate night of the four-day weekend without their spirits being dampened.

In Manchester City Centre one lady commemorated the Queen’s 70 year reign by sporting a cardboard cut-out of Her Majesty with a pair of shades.

While at a pub garden in the city, a crowd of people were seen all singing together with their arms outstretched under Union Jack bunting.

In Liverpool a group decided to use the night as an opportunity for fancy dress, with each person dressed as a character from Mario.

In Blackpool an impressive firework display was set off from around the iconic rollercoasters near the beachfront to mark Queen Elizabeth’s seven decades. 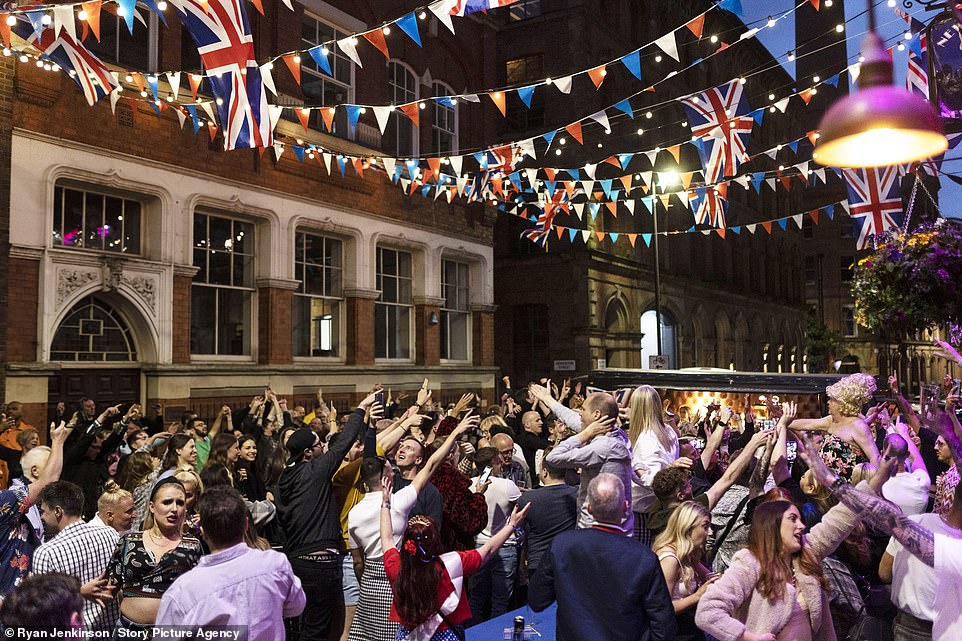 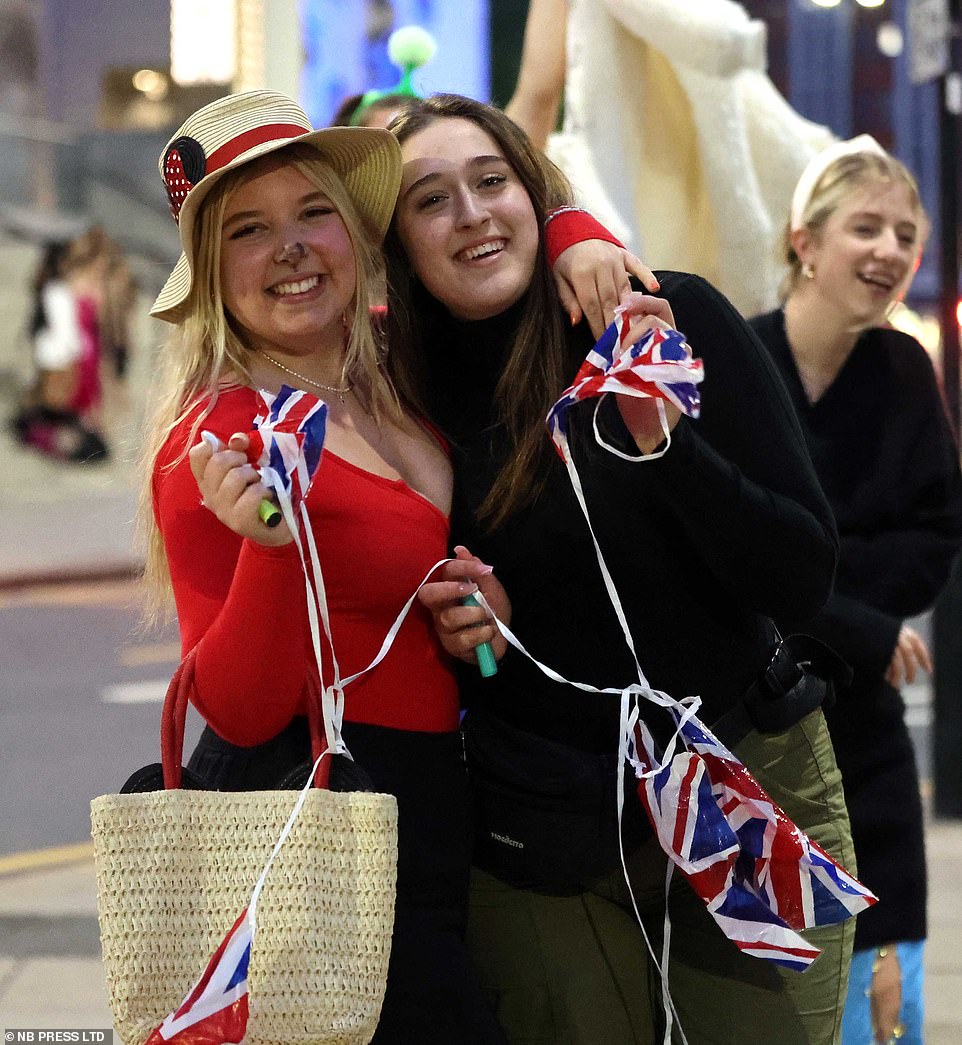 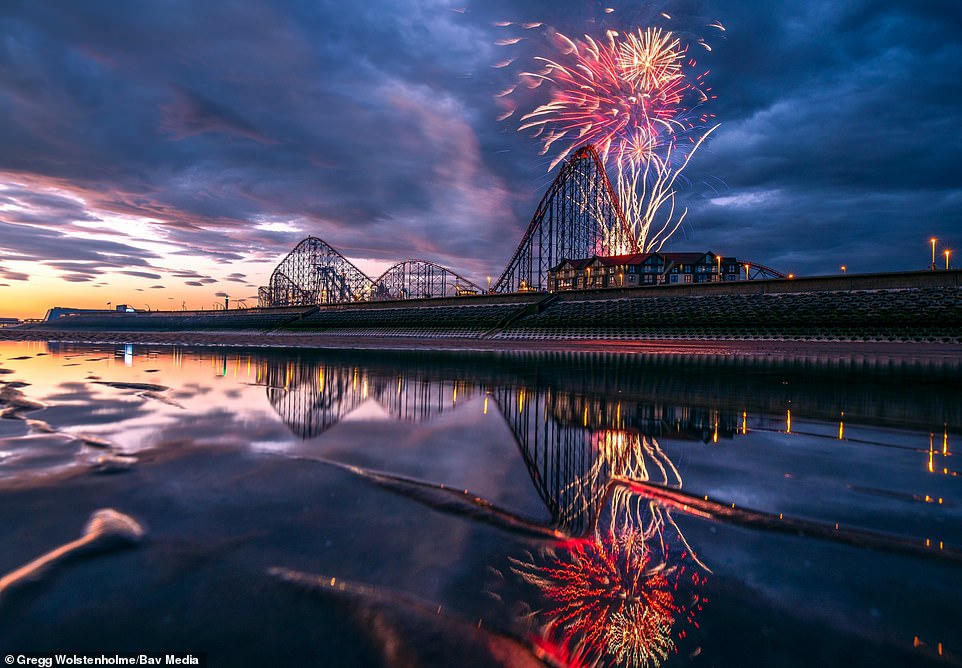 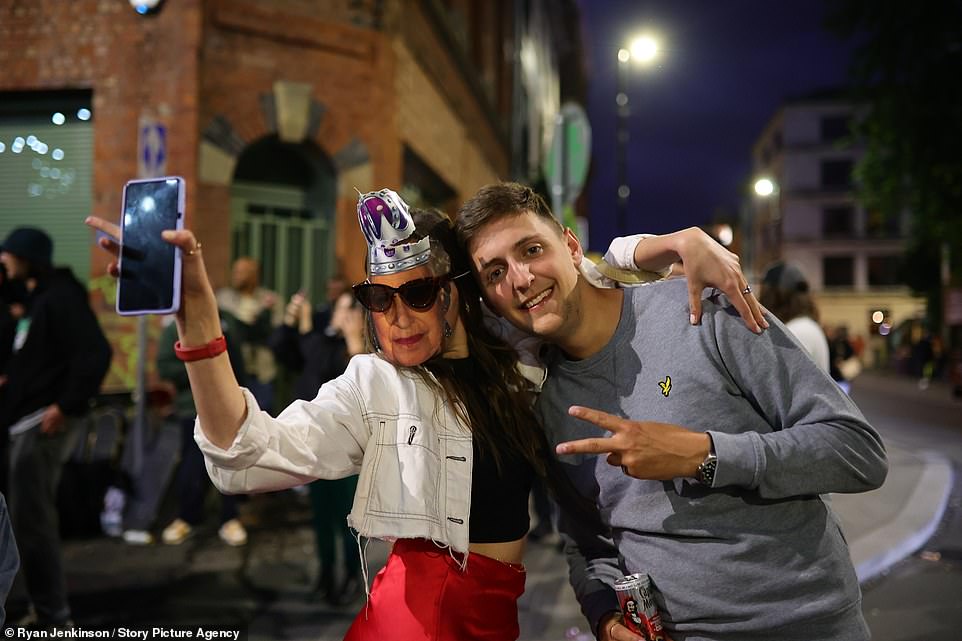 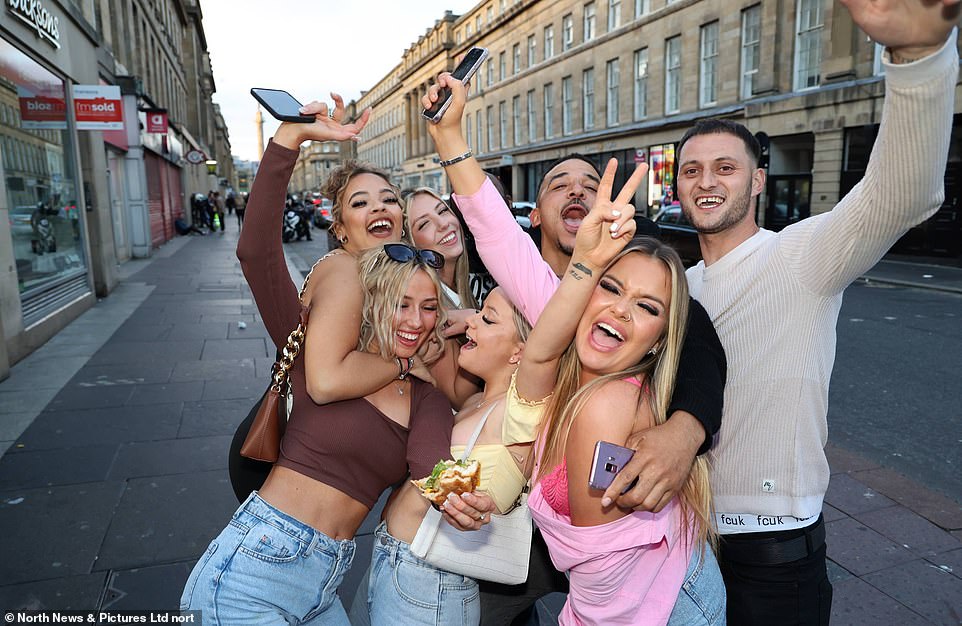 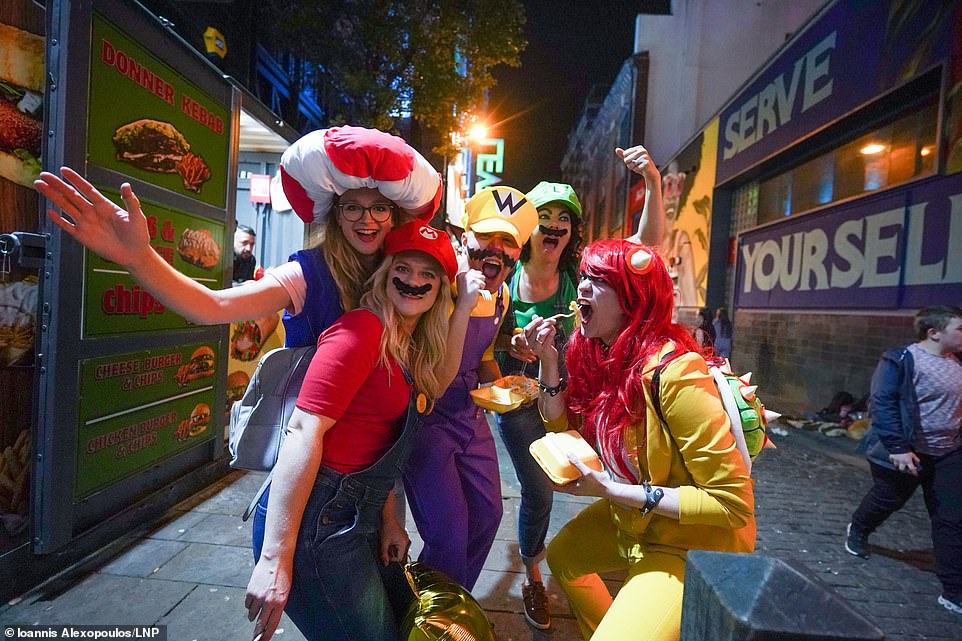 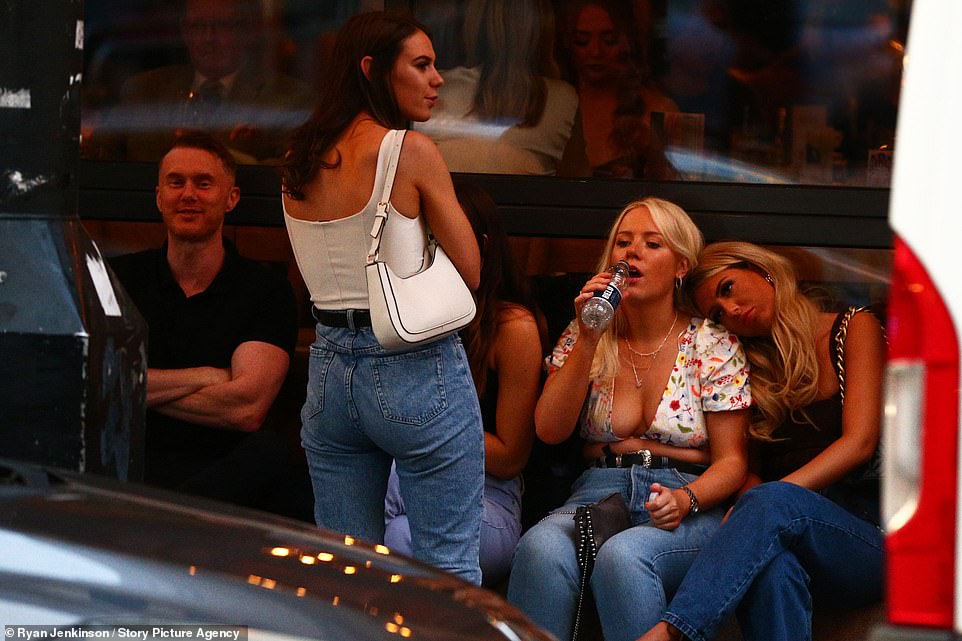 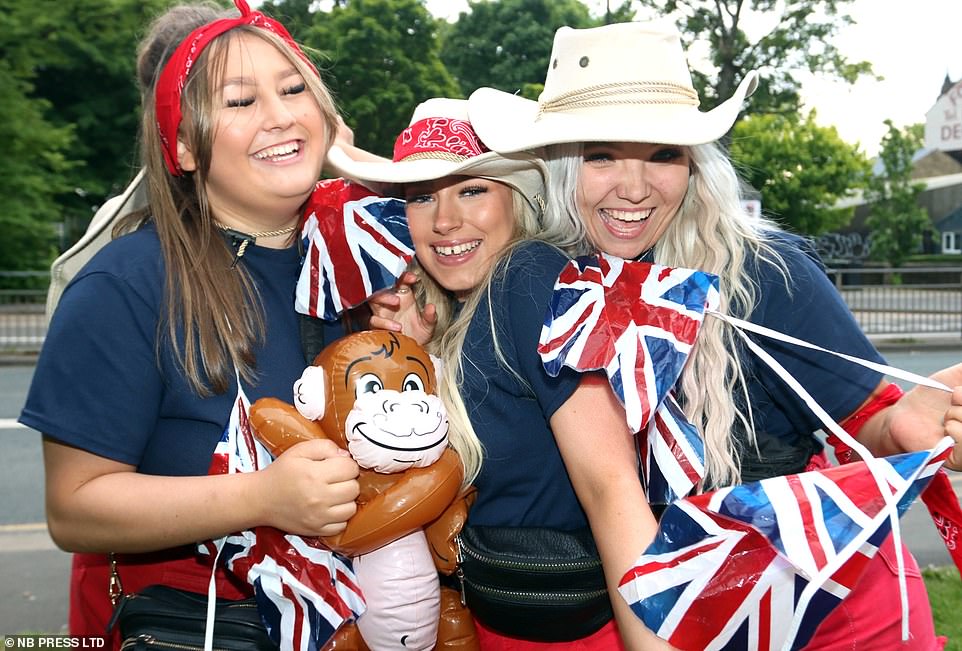 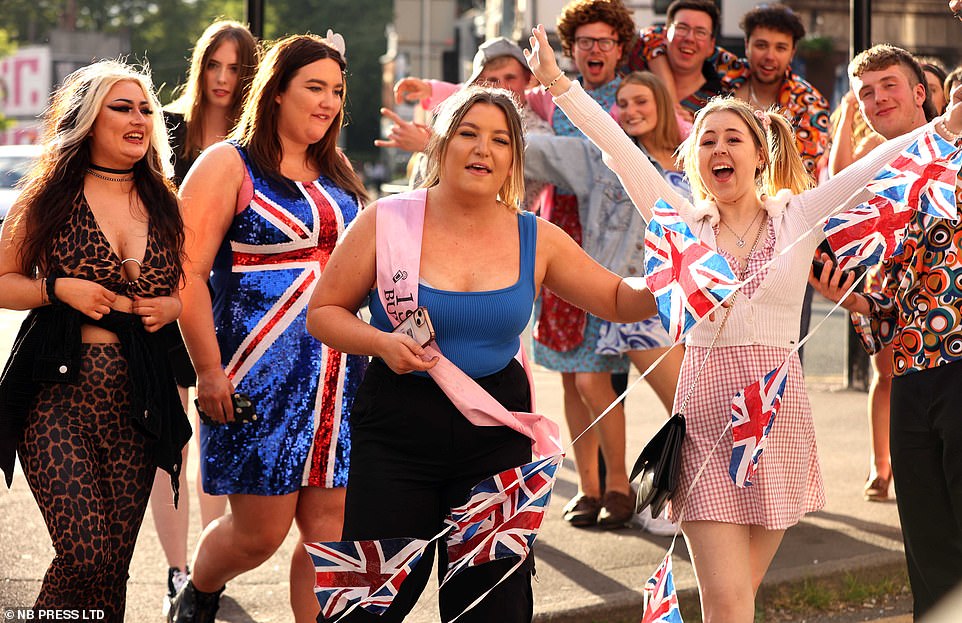 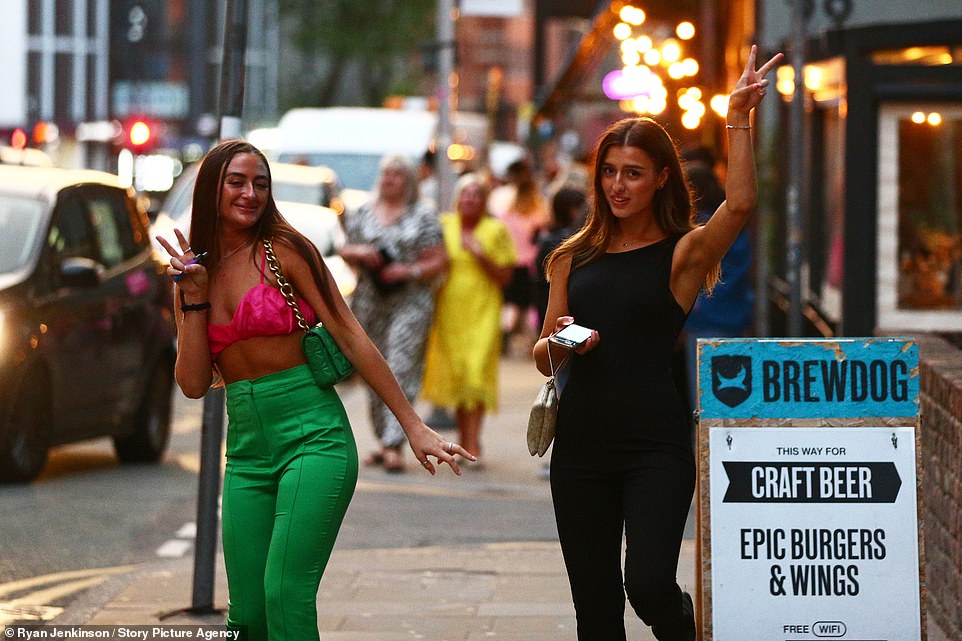 People out on the town last night may have headed there after watching the Epsom Derby or rushed out after the Party At The Palace concert which ended at 10:30pm.

The partygoers who manage to wake up in time today will be able to enjoy the final celebrations from the extended weekend.

Street parties and Big Jubilee Lunches are planned for across the country today if the weather holds out.

The Jubilee Pageant takes place in central London today from 2.30pm-5pm, with a 3km carnival procession featuring a cast of thousands.

Puppets, celebrities and tributes to the seven decades of the Queen’s reign will be portrayed by the pageant.

It will move down The Mall, which was speedily cleaned up after the open air concert which had more than 20,000 people last night, and past the palace.

The finale will feature a performance by Ed Sheeran and the singing of the national anthem. 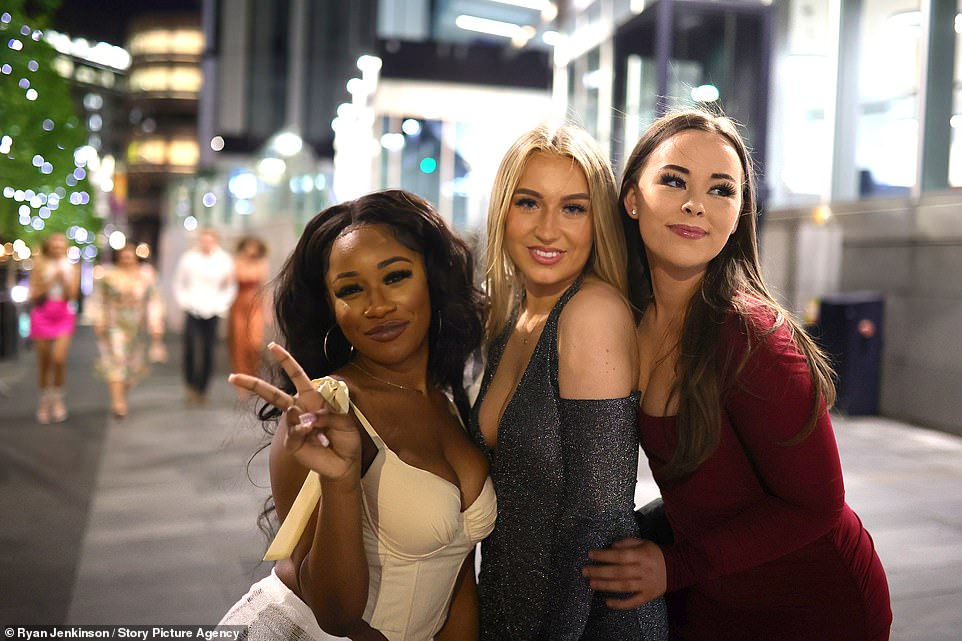 Manchester: Jubilant revellers raised a glass to the Queen for her Platinum Jubilee as they packed out pubs and bars 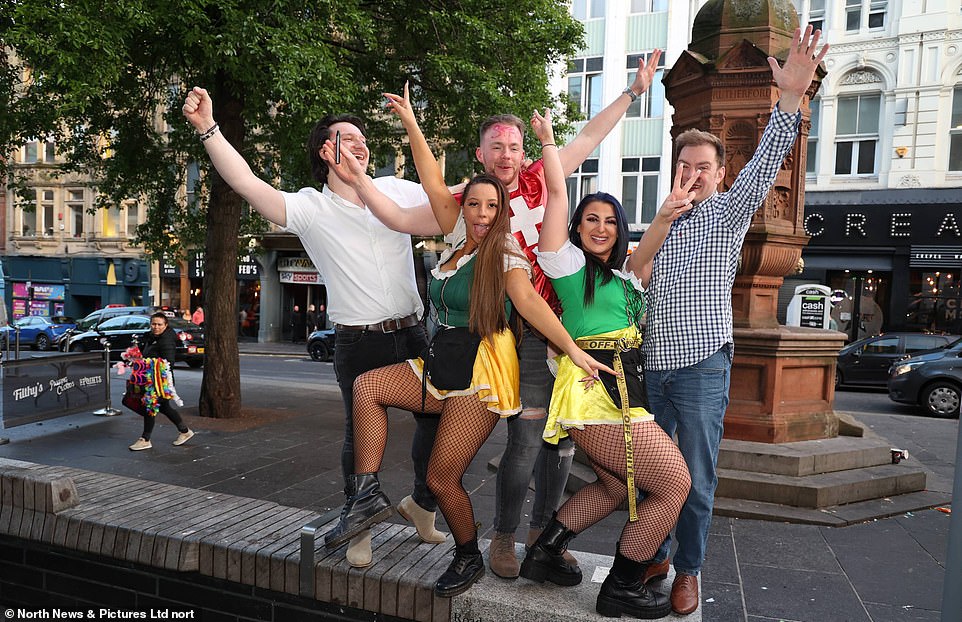 Newcastle: Up and down the country, boozy Britons did not shy away from getting in the partying mood as they flocked to pubs for the third day or the four-day weekend 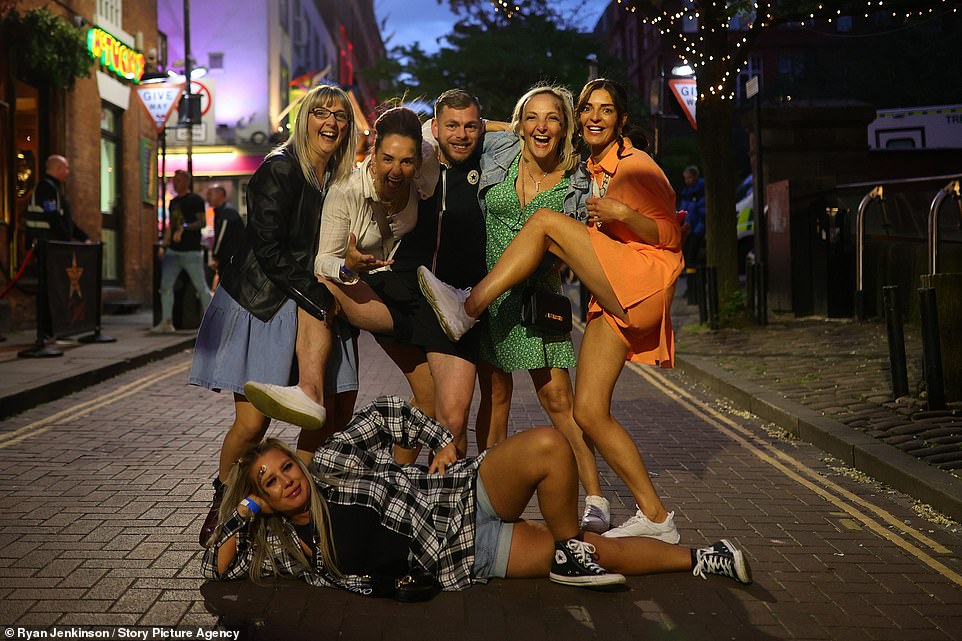 Friends pose for the camera in Manchester on Saturday night 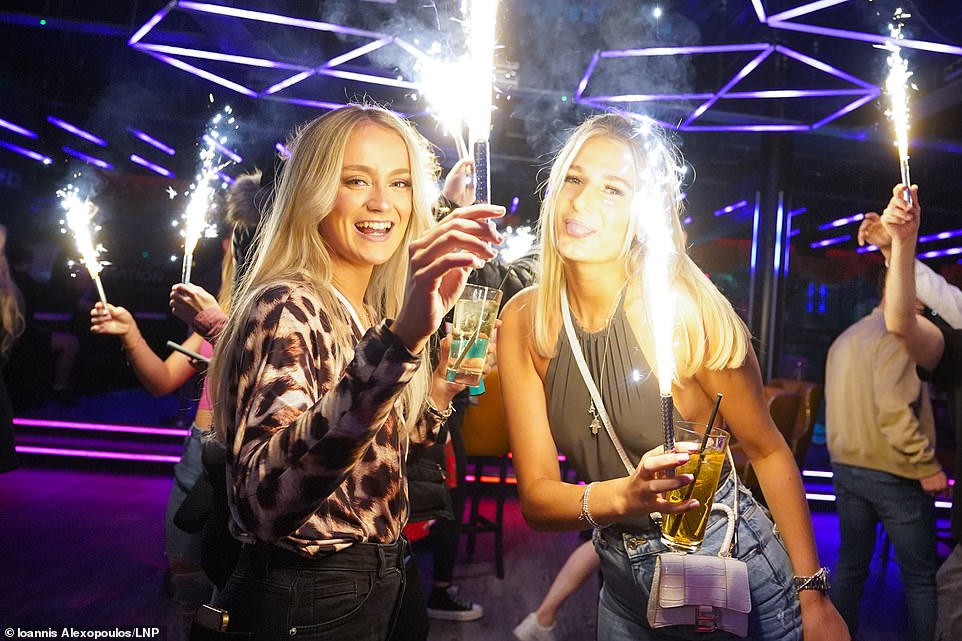 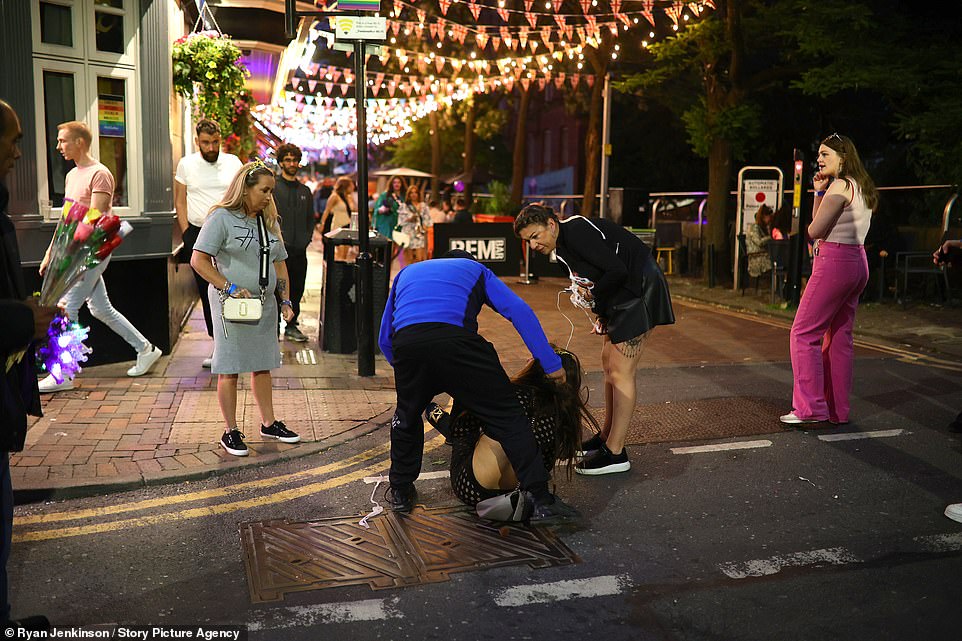 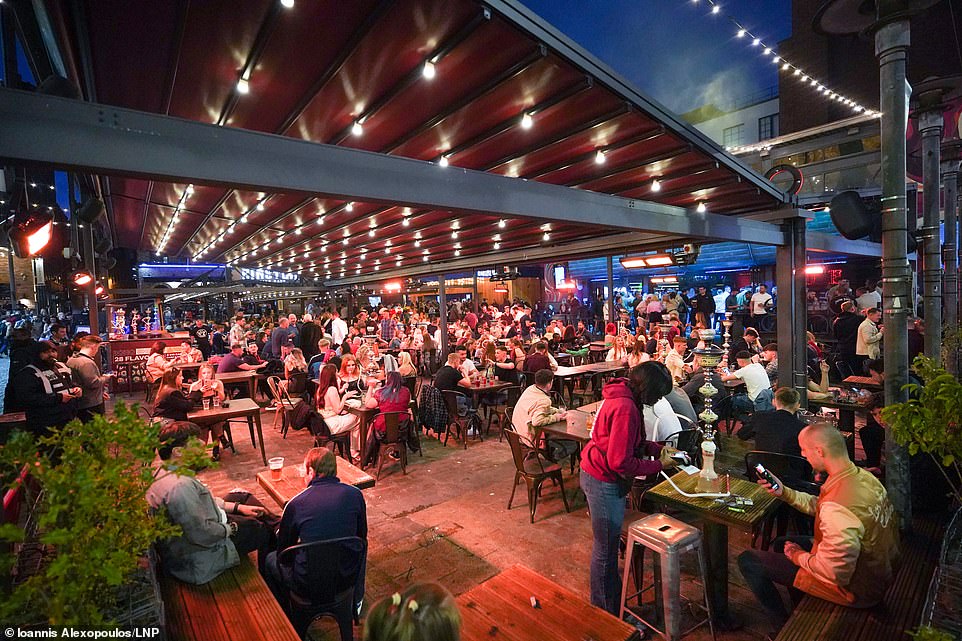 Photographs showed eager revellers toasting Her Majesty as they packed the streets outside bars and danced the night away as jovial Jubilee celebrations got into full swing.

The Queen’s Platinum Jubilee has led the nation to throw a four-day party fit for a royal, with families, schools, and entire towns coming together to rejoice in celebrating the British monarch.

In Leeds dozens of people took part in the famous Otley Walk pub crawl last night, with many dressed in Union jack attire.

Today celebrations will continue as thousands of people will gather across the country as to have Big Jubilee Lunches and street parties, which are staged in celebration of the Queen’s record-breaking 70 year reign. 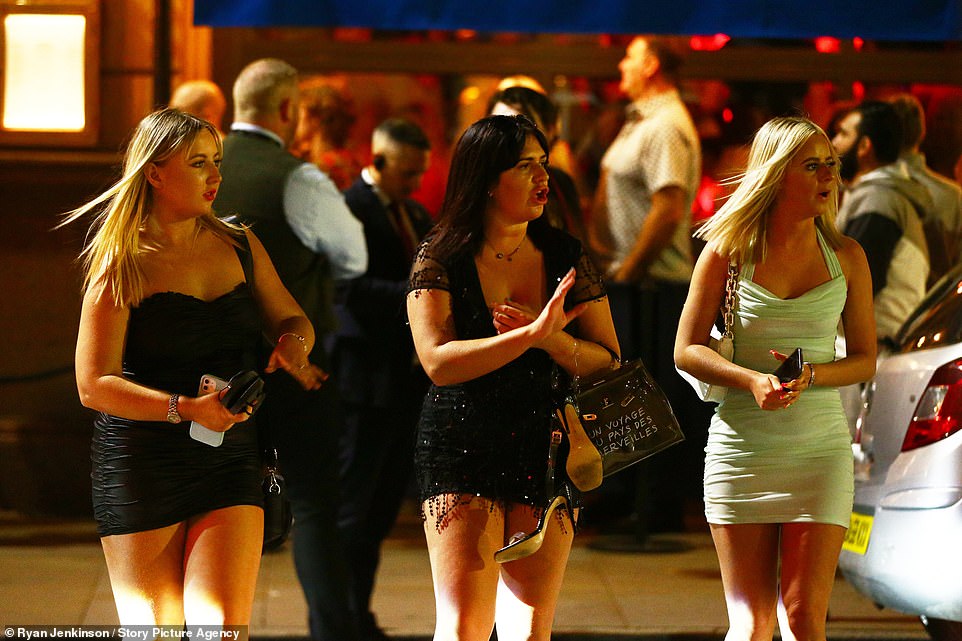 Three young women cross the street, one with her shoes in hand, in Manchester last night 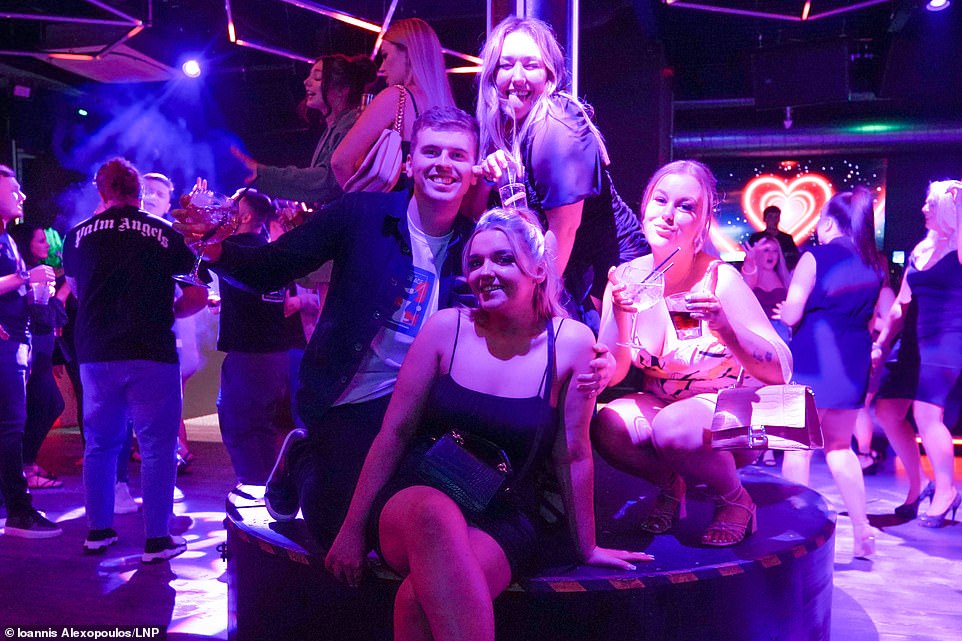 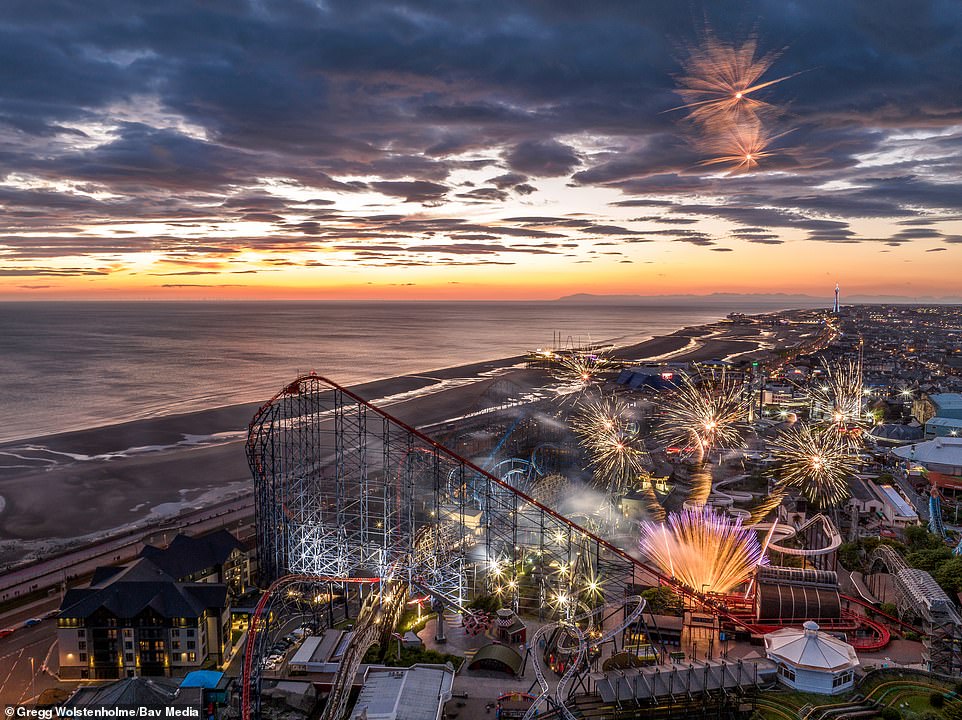 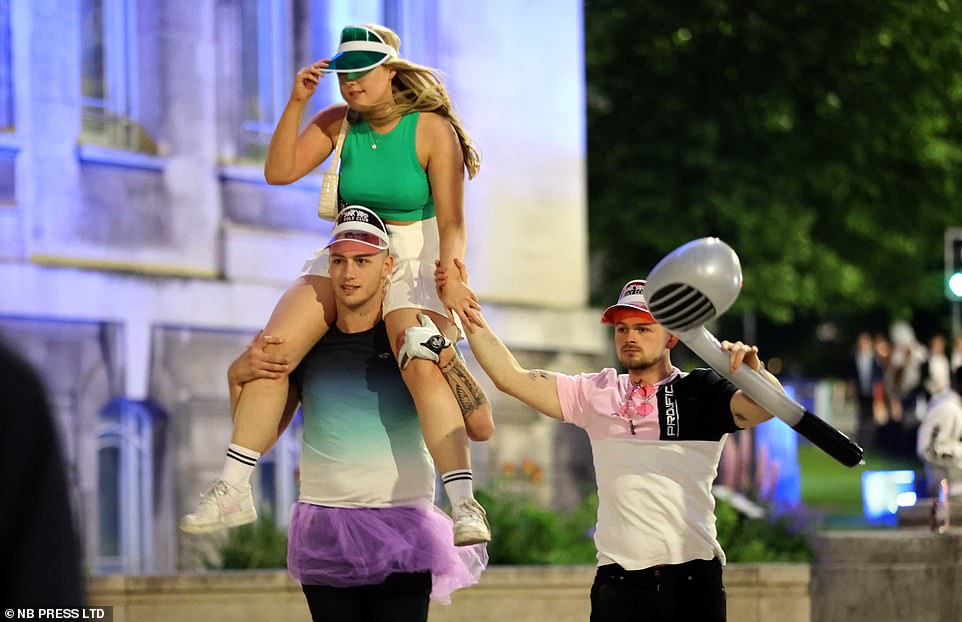 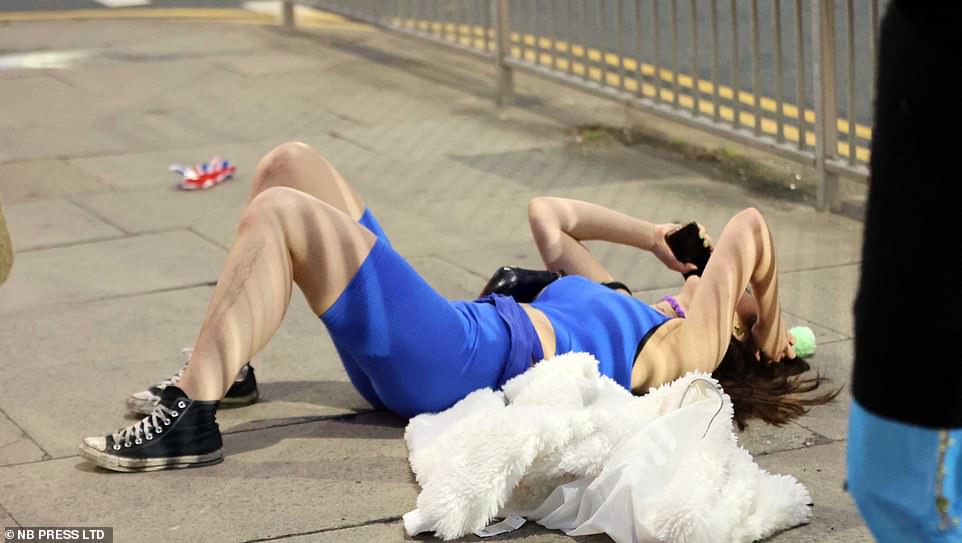