Will the new type of petrol wreck your car… and your lawnmower? This week E10 become the standard unleaded option on forecourts but are its eco credentials all they seem amid warnings that not all engines can cope with it

Green godsend, or a vastly damaging and expensive folly? That’s the question that needs asking about the UK’s new ‘eco-friendly’ E10 fuel that is about to dominate the UK’s forecourts as the next standard petrol option.

The Government is pushing E10 in a new initiative to help reach its carbon targets. It claims that ethanol — which is derived from crops such as wheat and other grains and sugar beet — is significantly cleaner than fossil fuels, because burning it creates less carbon dioxide (CO2).

Ministers enthusiastically predict that the change to E10 could cut our nation’s CO2 emissions from transport by 750,000 tons a year — the equivalent of taking 350,000 cars off the road.

But are they right to promote this new fuel so aggressively? A number of scientific experts warn that E10 will actually cause at least as much damage to the environment as conventional petrol, if not more. 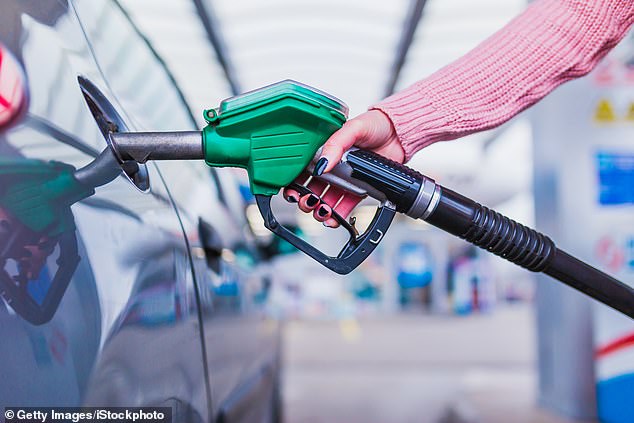 All petrol stations will sell E10 as the standard unleaded petrol from September 1 but is the new fuel a green godsend, or a vastly damaging and expensive folly? That is the question

They add that raising petrol’s ethanol levels will also increase the cost of driving for many and, worse, could leave huge numbers of motorists with damaged vehicles or useless ones which cannot use the fuel because the engines are too old.

Meanwhile, countless petrol garden mowers and other machinery such as strimmers and leaf blowers could be rendered inoperable because their engines cannot cope with the fuel.

I admit I am biased. I drive a 1960s car and a 1970s motorcycle. Neither could possibly run on E10 because of their ancient engines.

I believe that keeping old vehicles going, rather than having them melted into scrap and buying new ones, is the least damaging ecological path.

But it’s not only ageing jalopies at risk. The RAC estimates that some 600,000 petrol vehicles currently on UK roads will be damaged by E10 if they use it.

Furthermore, many modern, even brand-new, cars could be damaged, even written off, if drivers leave them sitting with E10 in their tanks.

And if you don’t believe me, just ask the owners of classic cars who already know the damage that ethanol can wreak, even in its weaker E5 form.

For ethanol is an alcohol, and it softens and dries out the rubber components in a fuel system, causing petrol lines, the small hoses through which fuel is moved, to crack and leak, as well as damaging vital seals in the engine.

Last year, for example, E5 caused a catastrophic rupture in the high-pressure fuel injectors of my lovely old Volvo sports car, a model familiar to anyone who watched Roger Moore in The Saint.

As the cabin filled with petrol fumes, my passenger and I had to jump out and leave it abandoned. 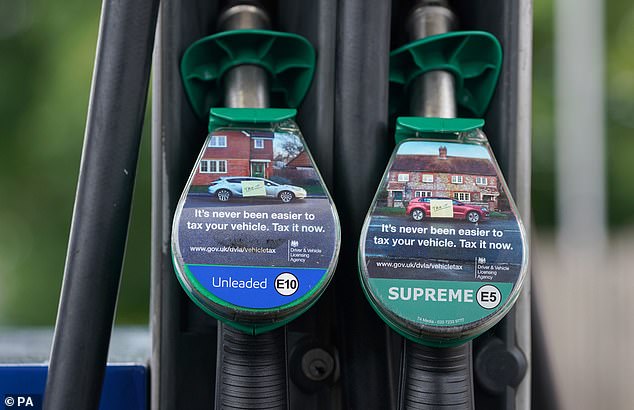 Official estimates suggest 700,000 cars are not compatible with the new E10 fuel (pictured)

The mechanic who recovered the car was astonished that it hadn’t promptly exploded into flames. I am also regularly having to replace the fuel pipes and seals on my 1970s motorcycles.

But very old bangers are by no means the only ones that E10 imperils.

With higher ethanol levels in petrol, similar problems could well afflict hundreds of thousands of more modern and perfectly serviceable vehicles built before 2011 which otherwise would keep going for years.

From 2011, in anticipation of the new fuel, cars were all equipped with petrol pipes, seals and other fuel-system components that can withstand the ethanol levels contained in E10.

The environmental cost of melting down all those otherwise useable cars for scrap, and then building new replacements, would be quite phenomenal.

The main mechanical threat from E10 to all petrol vehicles, both old and new, is the fact that ethanol is hygroscopic, it attracts water from the atmosphere.

This water, being heavier than fuel, sinks to the bottom of vehicle fuel tanks, where it causes corrosion and also damagingly gets sucked into cars’ engines by their fuel pumps.

Furthermore, ethanol-containing fuels have a very short shelf life and can start to decompose in as little as eight days. The old non-ethanol fuels could keep for several years. 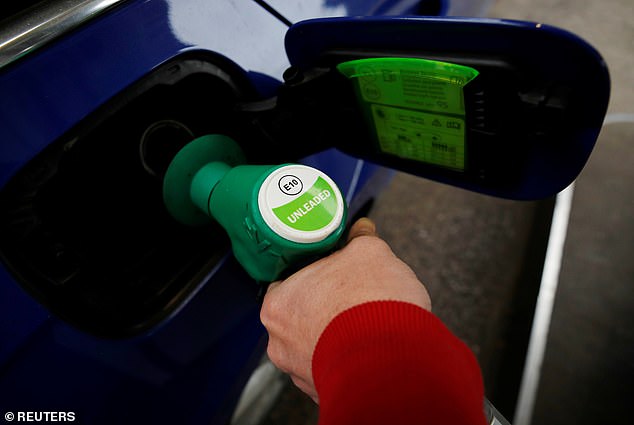 Scientific experts warn E10 will actually cause at least as much damage to the environment as conventional petrol, if not more and the increased ethanol level could damage vehicles

This is why experts at MPM Oil, a Netherlands-based international company which specialises in lubricants and liquids for cars, are warning car owners: ‘Do not fill up with E10 if you are not going to use the car for an extended time, as it can lead to damage to metals, gaskets, and plastics.’

In other words, if you use your car as sparingly as possible — which should be the most eco-friendly way of all to own a vehicle — it may cause serious breakdowns.

E10 also spells doom for Britain’s petrol-driven lawnmowers, which often only get run once a fortnight, and then just for half the year. They will perish and die.

Manufacturers such as Stafford-based Allett Mowers say that they are phasing out petrol mowers because of E10, and moving entirely to making electric machines.

So that’s garden sheds full of petrol mowers thrown needlessly on the scrapheap, and a whole new demand for ecologically damaging batteries for their replacements. Hardly greener.

Given all these drawbacks, any reasonable person must wonder why ethanol ever became such a popular alternative.

For this we can thank America’s politically powerful corn-growing lobby, which in 2005 pushed the U.S. government to pass laws requiring that petrol contain ever greater amounts of ethanol, which can be made from corn. This fuelled a global trend.

Ethanol might be touted as a green bio-fuel that produces lower carbon emissions, but as Mario Loyola, a former director at the White House Council on Environmental Quality points out, the ‘greener, cleaner’ claims deliberately ignore all the pollution that is produced during ethanol’s production. 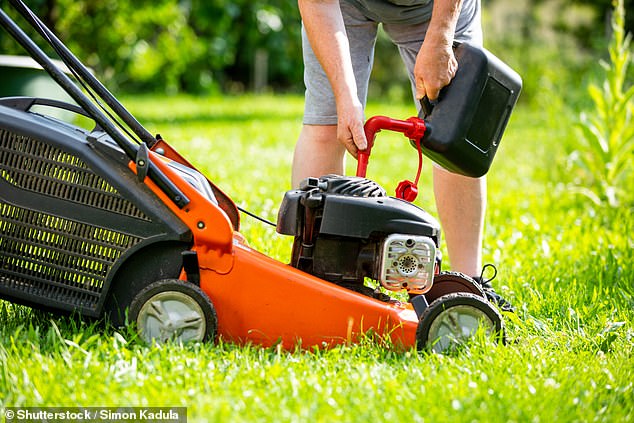 Meanwhile, countless petrol garden mowers and other machinery such as strimmers and leaf blowers could be rendered inoperable because their engines cannot cope with the fuel

Corn does not grow itself. Huge amounts of fossil fuel are required to plant, feed and harvest it.

Then the corn has to be transported and processed chemically to produce each gallon of ethanol.

This all produces high emissions of eco-damaging ozone, particulates and sulphur oxide.

What’s more, the vast use of nitrogen-based fertilisers to grow the corn releases high levels of nitrogen oxide into the atmosphere.

This chemical not only destroys ozone but has a higher greenhouse effect than carbon dioxide.

This is why, back in 2011, the U.S. National Academy of Science warned that when the total impacts of producing corn ethanol are added together, the fuel may prove worse for the climate than petrol.

What’s more, turning land used for food-production over to ethanol-producing corn ultimately causes food scarcities that push up the price of our everyday meals.

‘As a result of ethanol-growing, the price of all foods, not just those directly related to corn, increases,’ says Loyola. 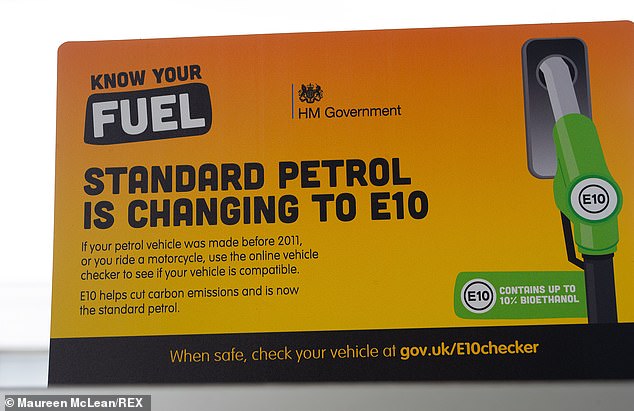 Pictured: An HM Government Know Your Fuel sign at a petrol station last month. Standard petrol is changing to E10 meaning that cars made before 2011 may not be compatible

‘Because the U.S. is the world’s largest exporter of food, food prices increase all over the world.’

So who is ethanol good for? Loyola, the former White House environment expert, argues that ‘its sole beneficiaries are large agricultural corporations — and the politicians who serve them’.

E10 was first introduced in the UK in 2011, but until now there has been no Government push to make it the standard forecourt option displacing E5.

It is true that, for the time being, E5 petrol will still be available on many station forecourts under the Super Unleaded pump.

But motoring bodies are warning that it will be more expensive, at around 12p a litre more than the new E10 standard unleaded.

What is undeniable is that large numbers of stations will discard the old standard altogether. Historic-vehicle associations say they hope that continuing demand will make it financially profitable for at least one petrol station per town to keep offering it.

And if drivers who can’t live without it have to travel further just to find forecourts still selling E5, that’s a whole new load of unnecessary carbon emissions getting pumped skywards. Yet so far, many drivers remain ignorant of the risks involved with E10.

An RAC survey shows that more than a quarter of British motorists do not know whether their cars can run on it.

Indeed, 24 per cent of motorists are completely unaware of its existence.

In an attempt to help, the Government has set up a website where drivers can check whether their car will run on E10 fuel.

Nevertheless, it warns it will not be liable for any damage to vehicles as a result of drivers using its checker.

We should, of course, all applaud genuinely useful new strategies to cut carbon emissions and assuage climate change.

However, adding 10 per cent ethanol to petrol doesn’t create a fuel paradise. Just a fools’ one.