Charleston, South Carolina: It's Sunday morning at the Royal Missionary Baptist Church and Isaac Holt junior is at the pulpit, preaching about the importance of recovering lost sheep.

The elders in the African-American community, the pastor says, are shepherds who have let too many members of their flock go astray. 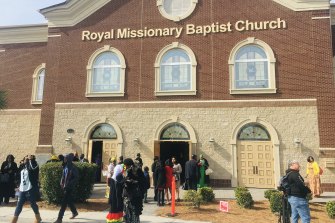 "There was a time in our homes when mamma and daddy spoke it and that was it," the pastor says, prompting a burst of approval from the congregation. "When they said 'You've got to get up', you got up. When they said 'shut up', you shut up!"

Holt wants to return to the days when parents enforced discipline, divorce was rare and almost everyone went to church on Sundays. "When the word 'neighbour' was still connected to the word 'hood'."

It is Black History Month in the United States and many the worshippers at this North Charleston church are celebrating by wearing "Afro-centric" outfits: brightly-coloured dresses and headpieces you'd more commonly see in Nairobi or Cape Town.

Everyone seated in the pews is black – besides three white people in the front row and a gaggle of mostly white reporters in the balcony above, including your correspondent for The Sydney Morning Herald and The Age.

The three in the front row are Democratic presidential aspirant Joe Biden, his wife Jill and their granddaughter Finnegan, who are here seeking votes before South Carolina's crucial Democratic primary on Saturday (Sunday Australian time). 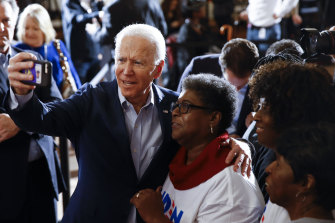 The former vice-president needs to win – and win big – in South Carolina to keep alive his hopes of becoming the party's nominee. A resounding victory would catapult Biden into next week's "Super Tuesday" contests, where a third of total votes in the primary contest are up for grabs.

A loss for Biden, or even a narrow win, would almost certainly guarantee that Bernie Sanders will be Donald Trump’s opponent in November.

Biden finished in a disastrous fourth and fifth place respectively in Iowa and New Hampshire, where almost all the Democratic voters are white and tend to lean progressive.

He's on friendlier turf in South Carolina, where an estimated 60 per cent of Democratic primary voters are black and the electorate is more socially conservative.

Holt explains to the worshipers that, unlike some pastors, he's happy to invite political candidates to speak at Royal Missionary Baptist. South Carolina's black voters wield a lot of power and he wants them to be informed. "We are the absolute majority of the Democratic Party in this state," he says. "If we vote collectively and turn out strongly, we can decide the next president of the United States."

Speaking from the pulpit, Biden makes the same argument: "You can own this election. You’re entitled to own it. It’s yours to determine, and I hope you just look me over."

Biden delivers essentially the same stump speech he has given throughout the campaign. Heavy on values and light on policies, the 77-year-old talks about restoring the soul of America and bringing decency back to the White House. 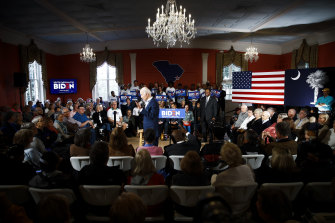 Former US vice president Joe BIden addresses the crowd during an event in Charleston.Credit:AP

But lines that prompted only polite applause in Iowa and New Hampshire generate a lot more enthusiasm here. Nostalgia plays well among this older-skewing crowd – as does the fact Biden served alongside America's first black president during his eight years in office.

"Barack Obama chose him out of a long line of people to be his vice-president," Holt says after Biden's speech. "That goes a long way." The pastor says he's not recommending a vote for any candidate, but this sure sounds like a recommendation. 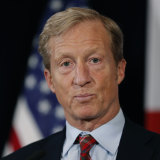 Summing up the politics of his state, Andy Brack, the publisher of the Charleston City Paper, says: "We are still kind of old school here. We are a state that values experience."

A candidate like Pete Buttigieg – a 38-year-old, openly gay former mayor with no national political experience – is a poor fit for South Carolina, he says. Meanwhile, with Biden, "There is a legacy of familiarity and moderation that makes him an attractive candidate".

Biden has described South Carolina as his "firewall", and until the polls long showed him way out in front here. That's changed in recent weeks. In November, a YouGov poll showed Biden on 45 per cent in South Carolina, twice as much as his nearest Democratic rival. By February that had slipped to 28 per cent, with Sanders close behind on 23 per cent.

Most of Biden's support hasn't flowed to Sanders but to California hedge fund manager Tom Steyer. With a net worth of $US1.6 billion, Steyer could be described as a poor man's Michael Bloomberg, which, of course, still makes him extremely rich.

Steyer has spent an astounding $US20 million on television advertising in South Carolina alone, promoting himself as a successful businessman who can beat Trump. That's 10 times as much as Buttigieg ($US2 million) and more again than Biden and Sanders. "You can't turn on a TV here without seeing Steyer's face," Brack says. "It's driving us crazy."

It's also working.  Steyer has risen from two per cent three months ago to 18 per cent, a surge that is limited only to South Carolina.

Biden is hoping that Steyer's support is soft, and that voters will drift back to him on polling day.

At the Democratic debate on Tuesday night (Wednesday AEDT),  Biden made an explicit pitch to black voters by promising to appoint the first African-American woman to the US Supreme Court if he becomes president.

His performance in the Charleston debate was his most vigorous yet, and he followed it up the next day by securing a prized endorsement. South Carolina congressman Jim Clyburn, the most senior African-American in Congress, announced he was was backing the former vice president. "I know Joe, we know Joe, but most importantly Joe knows us," Clyburn said, becoming emotional as he recalled that his late wife loved Biden more than any other political leader. 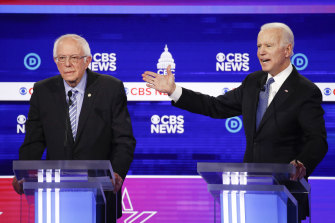 Joe Biden’s debate performance in South Carolina was hailed as his best of the campaign. Credit:AP

Like so many cities in America, Charleston remains markedly segregated by race and class. In affluent downtown Charleston – with its stately pastel-coloured houses and picturesque waterfront park – white people outnumber African-Americans. In North Charleston, the poverty and crime rates are higher, and a paper mill bellows a foul-smelling odour into the air. Here, black people outnumber white people.

Yet when Sanders appears at a rally at North Charleston, it's striking how those demographics shift. Almost everyone at his rally is white, reflecting his campaign's struggle to attract African-American voters.

Among the handful of black voters at the event are friends Brandon Greene and Jason Glover, both 28. Like younger voters across America, they are big Sanders fans. 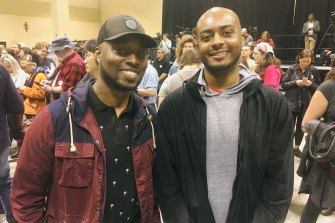 "He represents the values of our generation," Greene says of the 78-year-old democratic socialist. "I have a lot of family members who have been arrested for marijuana possession and he wants to expunge those records. He is speaking our language."

It's a different story among the older voters at the Royal Missionary Baptist, just a few blocks away.

Elizabeth Bellamy, 74, finds Sanders' progressive promises fanciful rather than inspiring. "He says he wants to make college free: is that for real?" she asks. 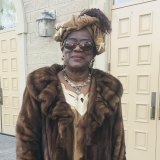 As for his plans for a sweeping expansion of government-funded healthcare, she says: "I don't think Medicare-for-all is possible. That may happen 20 years from now but no way in four years."

Like Bellamy, churchgoer Frank Russell jnr, 61, plans to vote for Biden. "I love Bernie Sanders, I really do," he says. "But I don't think America is ready for such a radical shift quite yet."

His priority is finding a candidate who can boot Trump out of the White House. The promised land can wait until another day.