‘I’d take her in a heartbeat’: Joe Biden says he would love to have Michelle Obama as his running mate – despite her insisting she has ‘no intention of running for office, ever’

Joe Biden says he would love to have Obama as his running mate in this November’s presidential election – but not Barack, his wife Michelle.

The presumptive Democratic presidential nominee and former vice president told CBS News that the former first lady would be a strong addition as VP.

However, he is unsure if she would accept the nomination.

‘I’d take her in a heartbeat,’ Biden said during an interview on Monday. ‘She’s brilliant. She knows the way around. She is a really fine woman.’

The former first lady has made clear she’s not interested in running for office but that is not stopping admirers from trying to convince her otherwise. 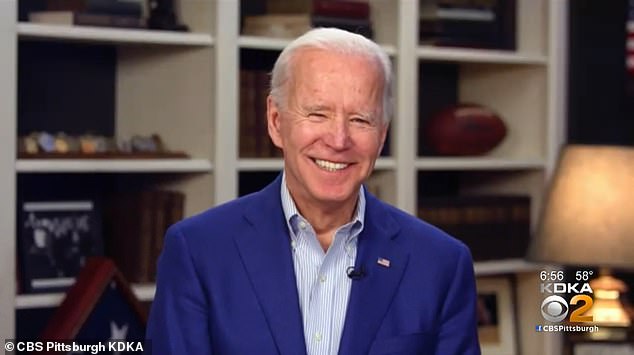 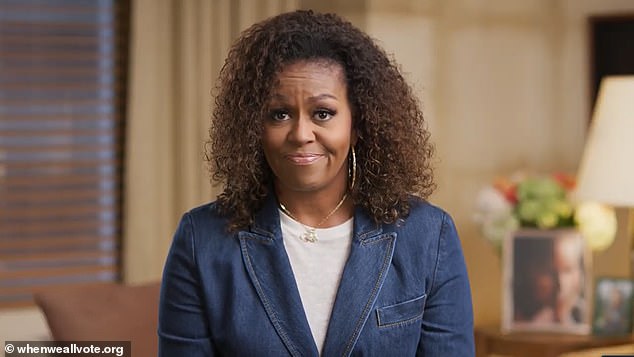 Michelle Obama is preparing to roll out her endorsement of Joe Biden, now the presumptive Democratic nominee but she has said she has ‘no interest’ in running for office 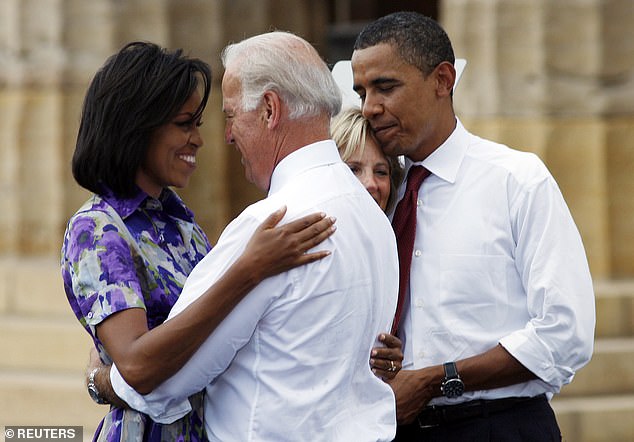 ‘I’ll say it here directly: I have no intention of running for office, ever,’ she wrote in her in her best-selling memoir, Becoming, released in 2018.

Biden has has already committed to choosing a woman as his running mate and noted that it was still early in the process of selecting a vice president.

‘In terms of who to pick, we’re just beginning the process,’ Biden told KDKA.

‘We’ll shortly name the committee to review this and begin to look through the backgrounds of the various potential nominees. And that’s just getting underway.

‘I’ll commit to that be a woman because it is very important that my administration look like the public, look like the nation. And we will be committed that there will be a woman of color on the Supreme Court, but it doesn’t mean there won’t be a vice president, as well,’ Biden said.

Biden then reiterated the ‘importance’ of remembering there’s ‘plenty of qualified people who have the experience and background who are women and are ready to be president on day one. And I’m gonna stick with that.’

During a Democratic Debate back in March, Biden publicly pledge to select a female running mate.

‘I would pick a woman to be my vice president,’ Biden said at the time, following a promise to also elect the first black woman to the Supreme Court.

Mrs Obama made a memorable speech at the 2016 Democratic National Convention where Hillary Clinton was nominated – famously telling Americans ‘when they go low, we go high’ – but made few appearances on the campaign trail for Clinton. 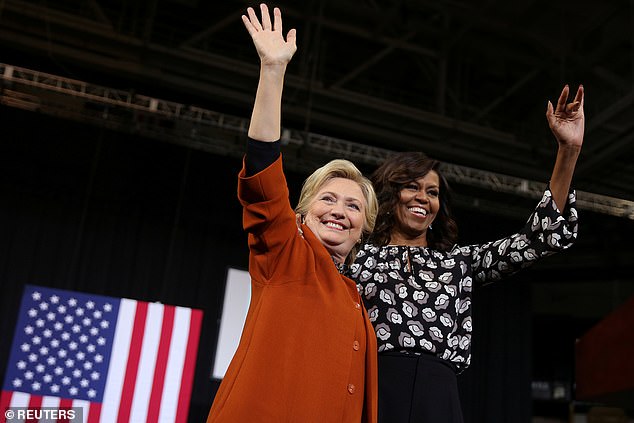 Michelle Obama (right) campaigned for Hillary Clinton (left) in 2016, but it wasn’t enough to help the Democratic nominee with the election over President Trump

The two women didn’t appear at a rally together until October 27th of that year – less than two weeks before the election – where Obama called her ‘my girl’ and Clinton gushed Obama was ‘amazing.’ At that North Carolina event, it was Obama who got the most cheers and applause.

This year, Obama is a part of When We All Vote – an initiative to get people to the polls this November. She had planned a voter participation rally in Detroit last month that was canceled when containment measures to combat the coronavirus were put into place.

‘I’m counting on all of you to help make sure everyone in this country knows how to register and vote safely in the 2020 elections. Join me and @WhenWeAllVote this Monday night—RSVP now for the voter registration #CouchParty at http://weall.vote/couchparty,’ she tweeted on Thursday.

Obama launched the group in the 2018 election cycle with the help of celebrity friends like Tom Hanks and Lin-Manuel Miranda. 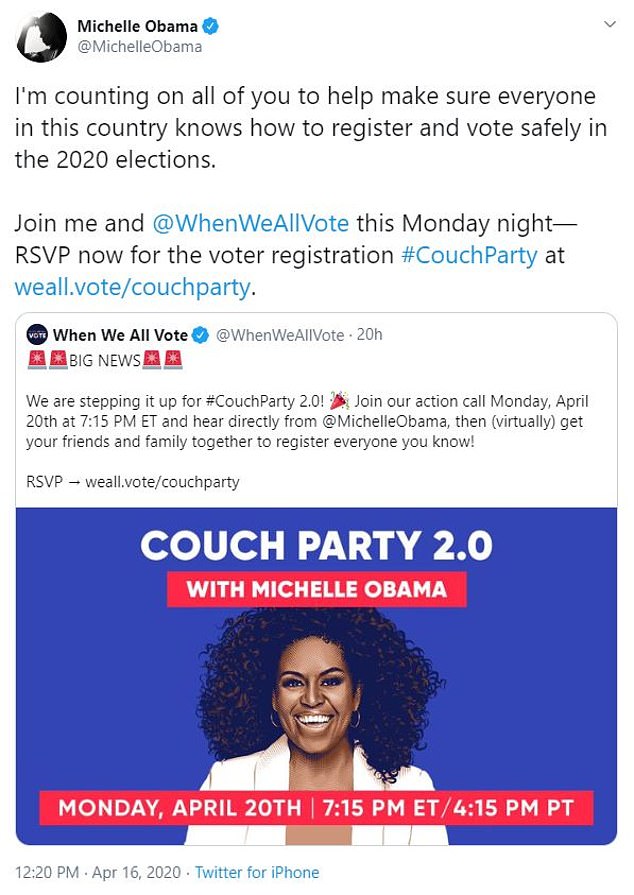 Michelle Obama is also reactivating her get out the vote group When We All Vote, an hosted a  ‘couch party’ on Monday evening

Since she left the White House, she’s also wrote her best-selling memoir ‘Becoming’ and went on a book tour that filled arenas usually only sold out by rock stars.

The timing of her Biden endorsement is yet to be determined.

She was close to both Joe and Jill Biden when President Barack Obama was in office.

Michelle Obama and Jill Biden worked together to support military spouses and families as part of their Joining Forces campaign. 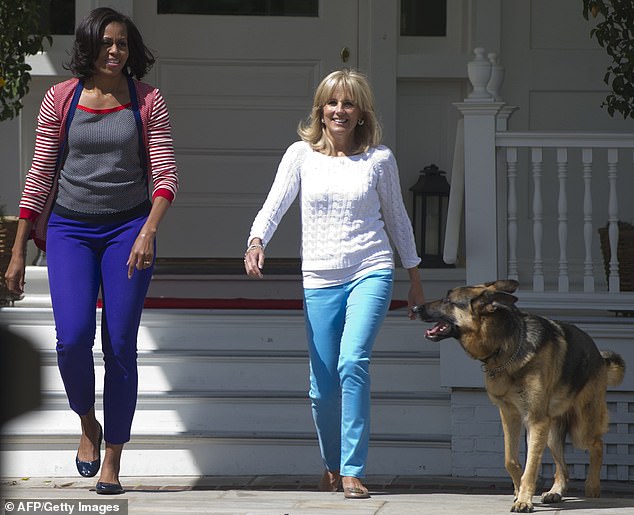 Michelle Obama (left) and Jill Biden (right) and the Biden’s dog Champ are photographed as part of their Joining Forces initiative in 2012, when their husbands were still in the White House 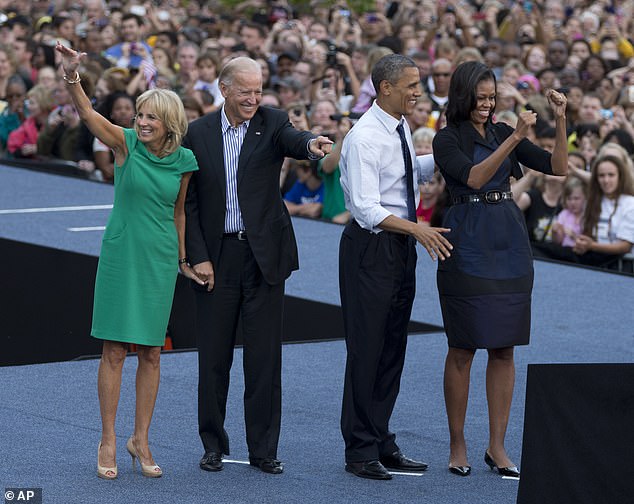 The two couples at an event in Iowa City, Iowa during their re-election bid in 2012

And Obama remains close to Kathleen Biden, the former wife of Hunter Biden. The two women have been workout buddies for years.

Additionally, the children of both – Maisy, Finnegan, and Naomi Biden and Malia and Sasha Obama – all attended Sidwell Friends, the posh Washington D.C. private school that counts Chelsea Clinton as one of its alumni. 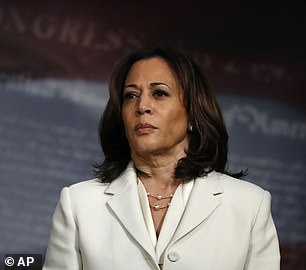 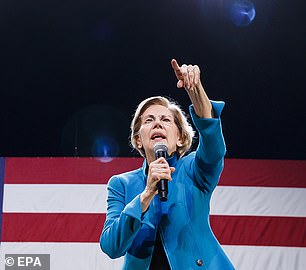 Among the contenders to be Biden’s running mate are former 2020 rivals Kamala Harris, Amy Klobuchar, and Elizabeth Warren.

While pundits are continue to discuss the options, bookmakers in Las Vegas have identified Harris as the most likely pick.

Senator Elizabeth Warren said last Wednesday that she would accept the offer, if she was asked to assume the role by Biden, despite so far refusing to publicly endorse him.

‘Yes,’ said Warren when she was asked on MSNBC how she would respond if Biden asked her to serve as his vice president.

‘I would be an excellent running mate,’ Abrams said in an interview published in Elle last week. I have the capacity to attract voters by motivating typically ignored communities. I have a strong history of executive and management experience in the private, public, and nonprofit sectors.

‘I’ve spent 25 years in independent study of foreign policy. I am ready to help advance an agenda of restoring America’s place in the world. If I am selected, I am prepared and excited to serve.’

She added that she was very ‘fortunate’ to hear her named mention in contention.