Van Horn, Texas: Amazon’s billionaire Jeff Bezos and three others landed after Blue Origin’s first flight to space with passengers aboard, a key milestone in the company’s effort to make space tourism viable.

The Amazon founder zoomed toward space with a hand-picked group; his younger brother, an 18-year-old from the Netherlands, and an 82-year-old aviation pioneer from Texas — the youngest and oldest to ever hurtle off the planet. 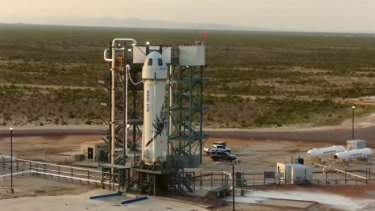 The company’s capsule landed in West Texas at about 8.22 am local time, roughly 10 minutes after it launched on Blue Origin’s New Shepard rocket.

The crew was to experience a few minutes of weightlessness as the ship soared past the Karman line at an altitude of about 100 kilometres above the Earth. The capsule then drifted back to the Earth beneath six parachutes.

Named after America’s first astronaut Alan Shepard, the Blue Origin rocket soared from remote West Texas on the 52nd anniversary of the Apollo 11 moon landing, a date chosen by Bezos for its historical significance. He held fast to it, even as Virgin Galactic’s Richard Branson pushed up his own flight from New Mexico in the race for space tourist dollars and beat him by nine days.

Unlike Branson’s piloted rocket plane, Bezos’ capsule was completely automated and required no official staff on board for the anticipated 10-minute, up-and-down flight.

Blue Origin was shooting for an altitude of roughly 106 kilometres, more than 16 kilometres higher than Branson’s ride on July 11. The passengers were expected to experience about three to four minutes of weightlessness to float around the spacious capsule and peer out the huge windows.