Billionaire Jeff Bezos was spotted getting cozy with his girlfriend at the Massachusetts Institute of Technology (MIT) commencement ceremony.

It is unclear if the pair were at the ceremony in support of a specific Class of 2022 graduate or if they were invited as prominent guests. Neither was listed as a guest speaker at the ceremony.

MIT has served as Bezos and Sanchez’s romantic stopping grounds for many years with the pair having reportedly shacked up together during a Parents’ Weekend in October 2018.

Bezos and the TV personality took to a hotel room together just hours after his then-wife, Mackenzie Scott, left town. The Bezos family had been visiting their son Preston at the university, Forbes reported at the time.

Preston, now 22, may have been a graduate at Friday’s ceremony, however DailyMail.com was unable to confirm his enrollment at MIT. Bezos and Scott have kept Preston’s life, including his academic career, relatively out of the public eye. 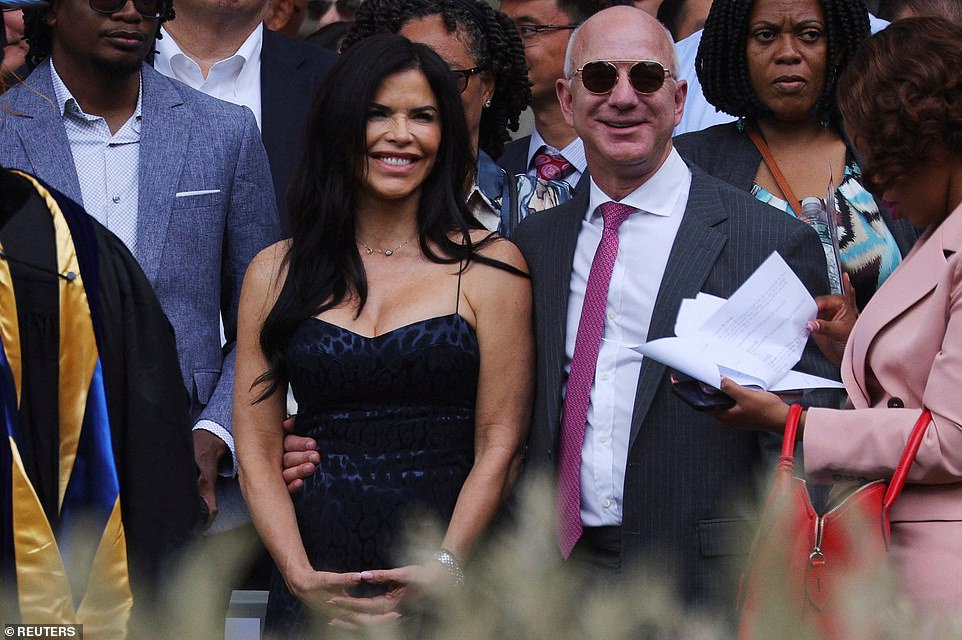 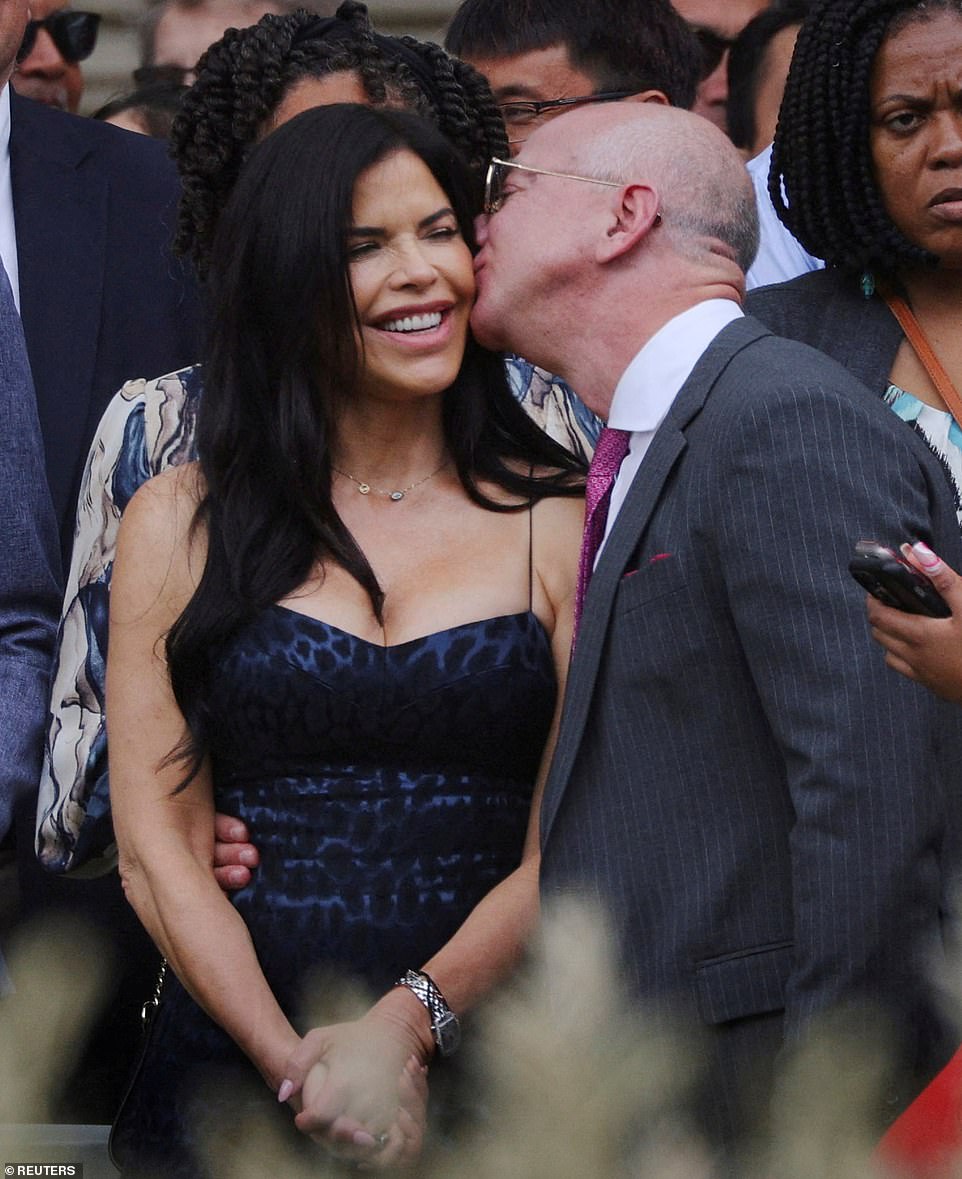 The Amazon founder and TV personality Lauren Sanchez were smiling, laughing and shared a few cheek kisses while attending the festivities 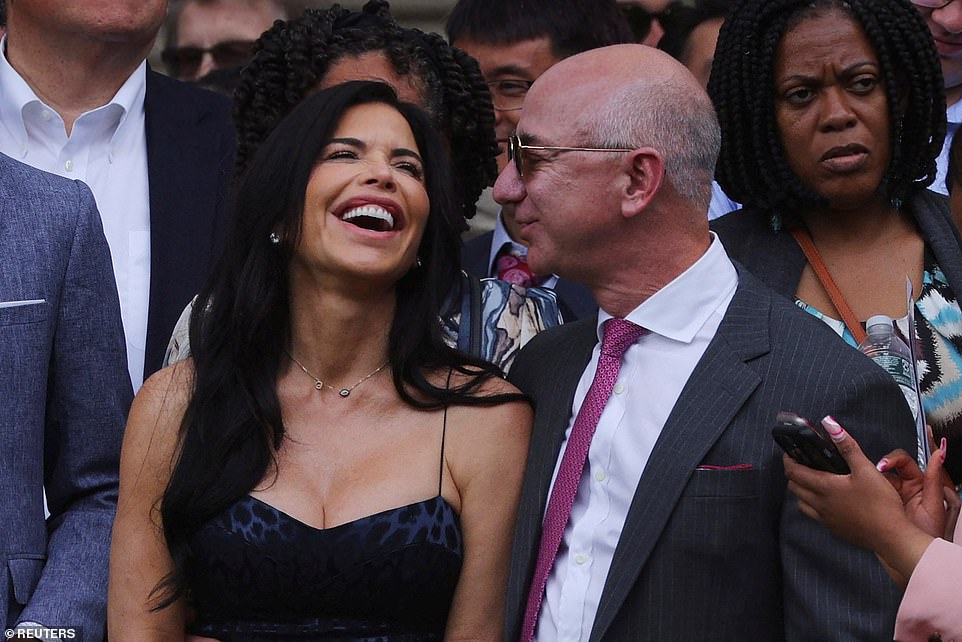 Sporting formal attire, Bezos and Sanchez attended MIT’s first in-person commencement ceremony in three years on Friday. The prestigious institution had held graduation virtually in 2020 and 2021 due to the COVID-19 pandemic.

Bezos, wearing a grey suit, purple tie and sunglasses, was seated next to his mistress-turned-girlfriend during the ceremony.

The couple did not shy away from public displays of affection.

Bezos was seen planting a kiss on Sanchez’s right cheek amid the crowd of commencement onlookers.

The pair, seemingly deep in conversation at times, also exchanged laughs as the ceremony progressed. 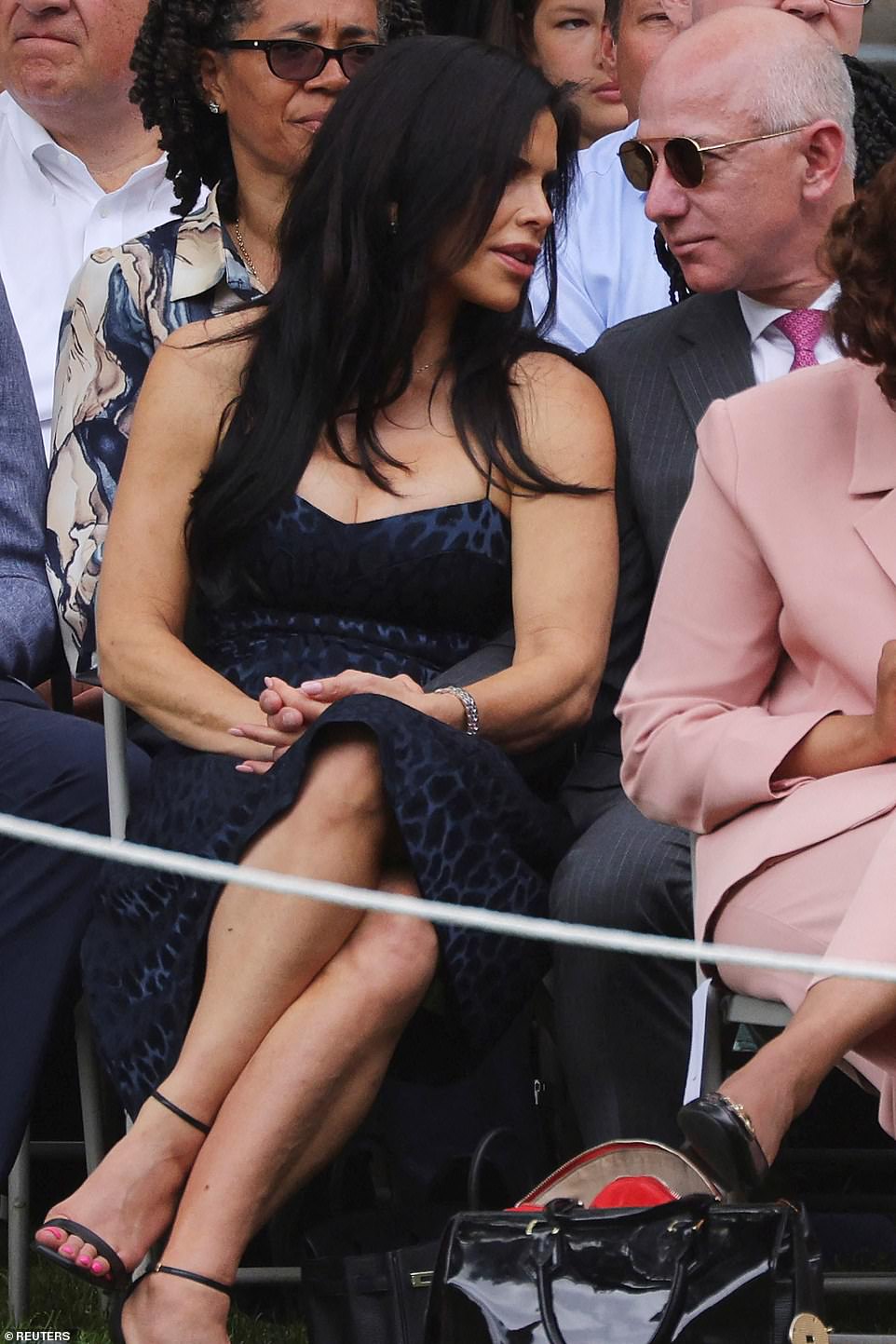 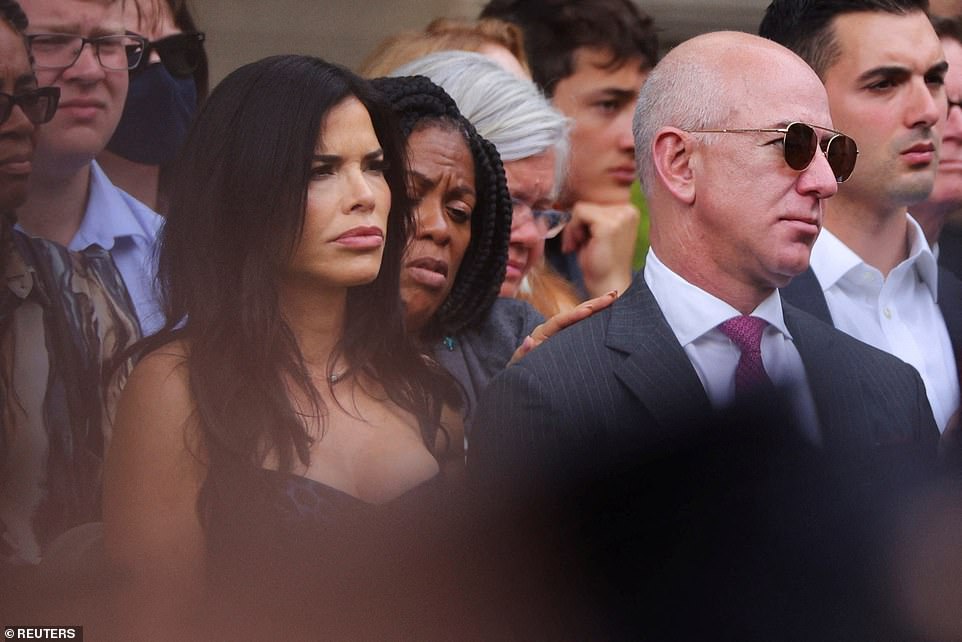 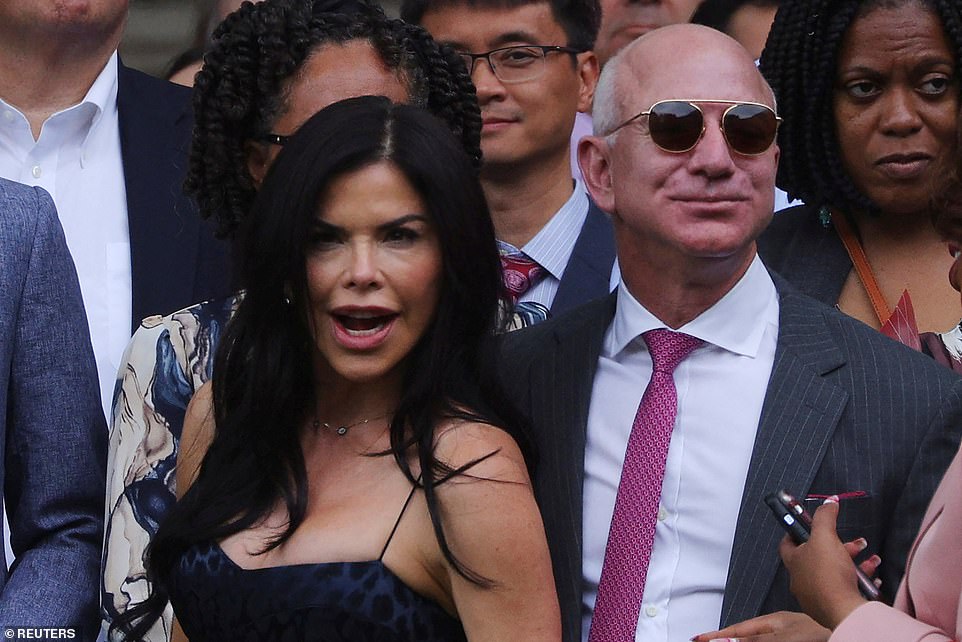 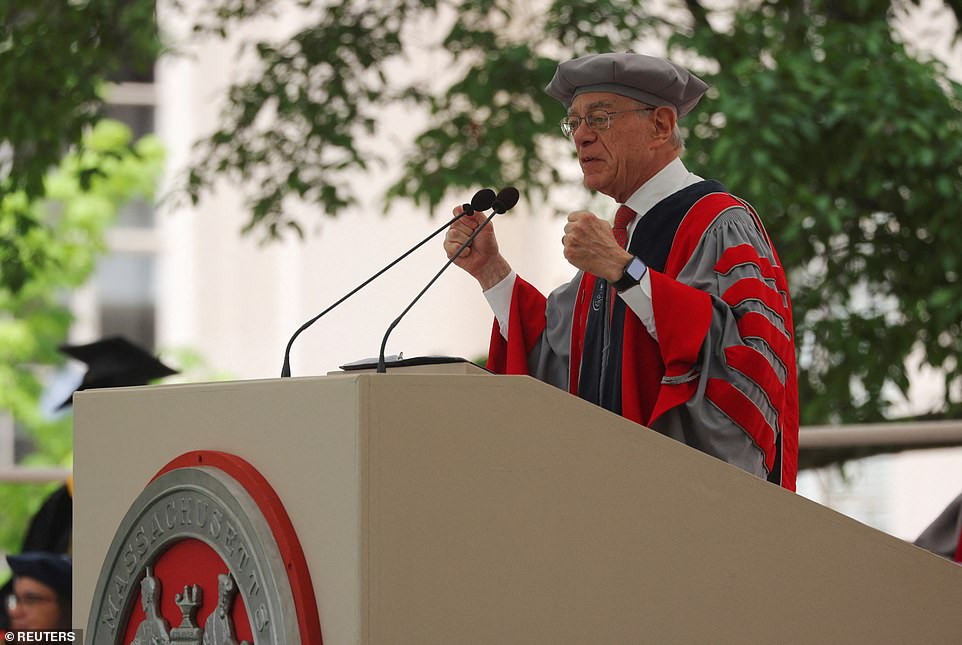 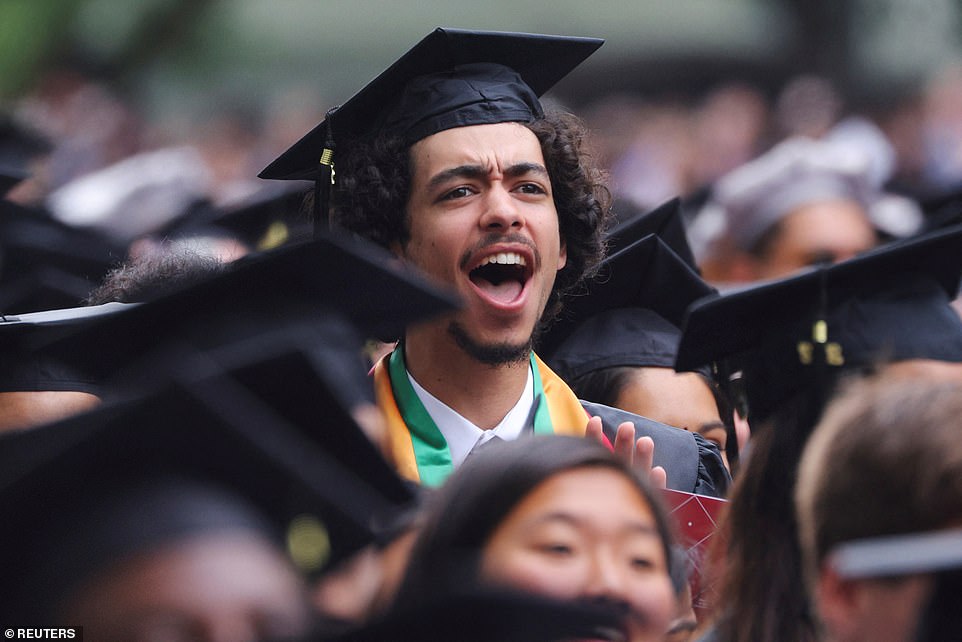 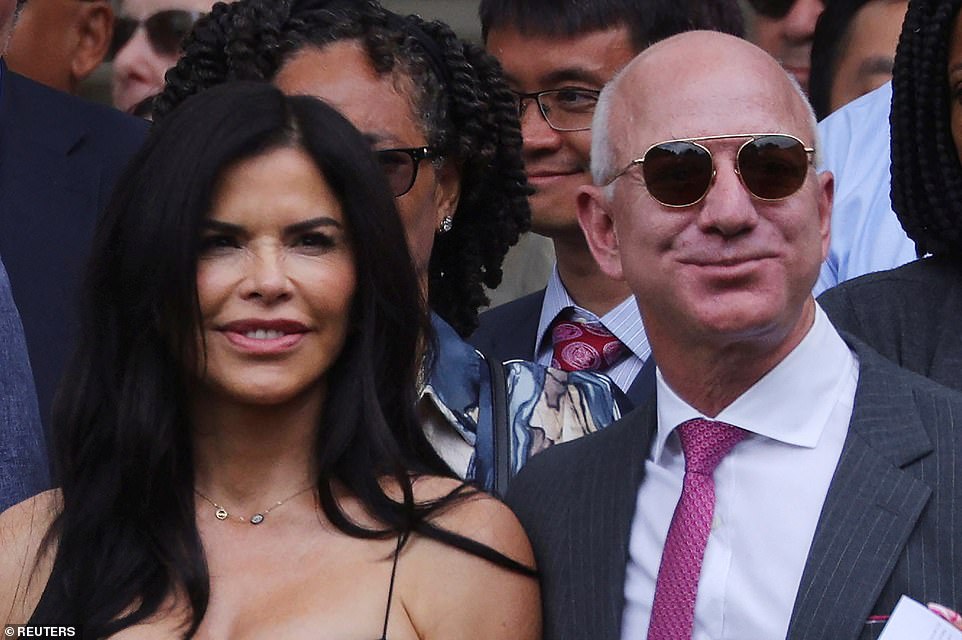 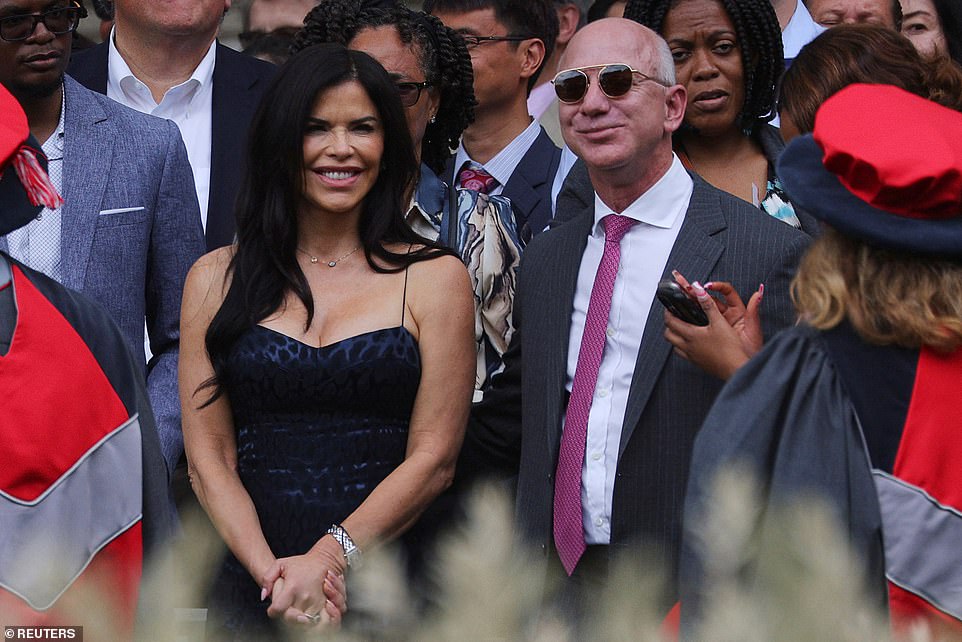 Sanchez and Bezos smile as the MIT commencement ceremony is underway

The graduation festivities come just days after Amazon, the online shopping venture that made Bezos the second-richest man in the world, celebrated a milestone anniversary.

’25 years ago yesterday, AMZN went public. As the Grateful Dead would say, “What a long, strange trip it’s been,”’ Bezos posted to Instagram on May 16.

‘It’s been far from smooth. Lots of risk-taking, lots of invention, lots of mistakes, so much we still have to do better. I wouldn’t trade the ride for anything.’

He launched the online retailer in 1994 with support from his now-ex Scott.

In addition to celebrating the successes of his business ventures, Bezos has also been spending time publicly criticizing President Joe Biden’s economic agenda.

He and the White House squared off on May 16 over the Biden administration’s handling of U.S. inflation and its plans to tax the rich.

Starting days prior, Bezos had been slamming Biden and accusing him of misleading the public on inflation by arguing that hiking taxes on corporations and the rich would lower consumer costs. 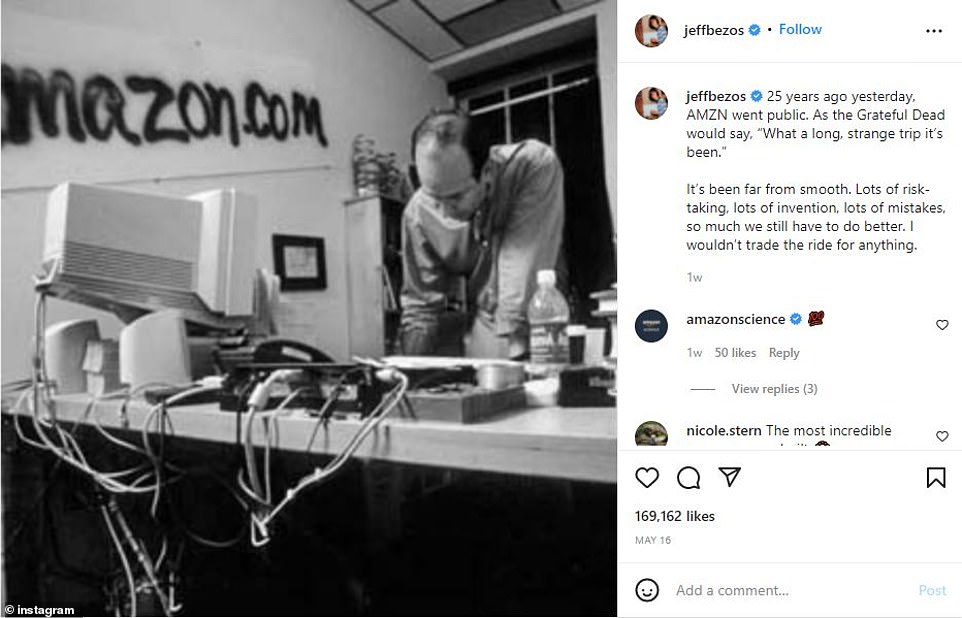 The graduation festivities come just days after Amazon, the online shopping venture that made Bezos the second-richest man in the world, celebrated a milestone anniversary

The administration responded with an unusually personal jab that suggested Bezos was trying to protect his wealth and undermine unions.

‘It doesn’t require a huge leap to figure out why one of the wealthiest individuals on Earth opposes an economic agenda for the middle class that cuts some of the biggest costs families face, fights inflation for the long haul, and adds to the historic deficit reduction the president is achieving by asking the richest taxpayers and corporations to pay their fair share,’ White House spokesperson Andrew Bates said in a statement at the time.

‘It’s also unsurprising that this tweet comes after the President met with labor organizers, including Amazon employees.’

Bezos responded that the administration was trying to distract from stimulus policies that stoked inflation.

‘They understandably want to muddy the topic,’ he said on Twitter. ‘They know inflation hurts the neediest the most. But unions aren’t causing inflation and neither are wealthy people.’

The back-and-forth escalated the war of words between the White House and one of the world’s richest men after Biden attacked Amazon for paying too little in federal taxes and appeared to side with workers seeking to unionize some of the company’s employees. 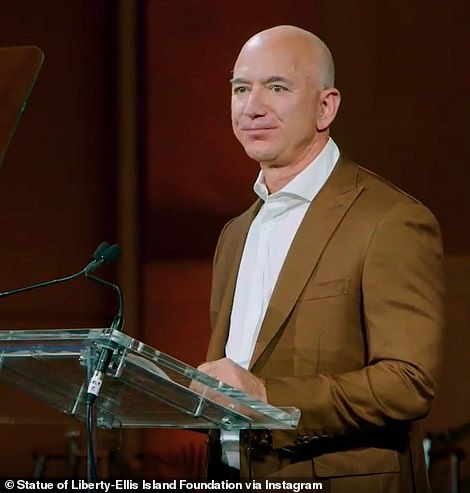 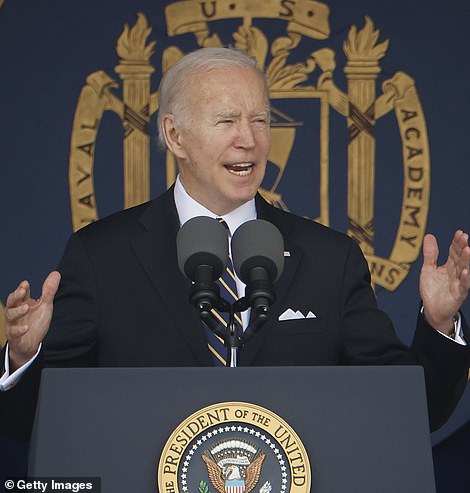 In recent weeks, Bezos (left) has spent time criticizing President Joe Biden’s economic plan. Bezos has slammed Biden (right), accusing him of misleading the public on inflation by arguing that hiking taxes on corporations and the rich would lower consumer costs 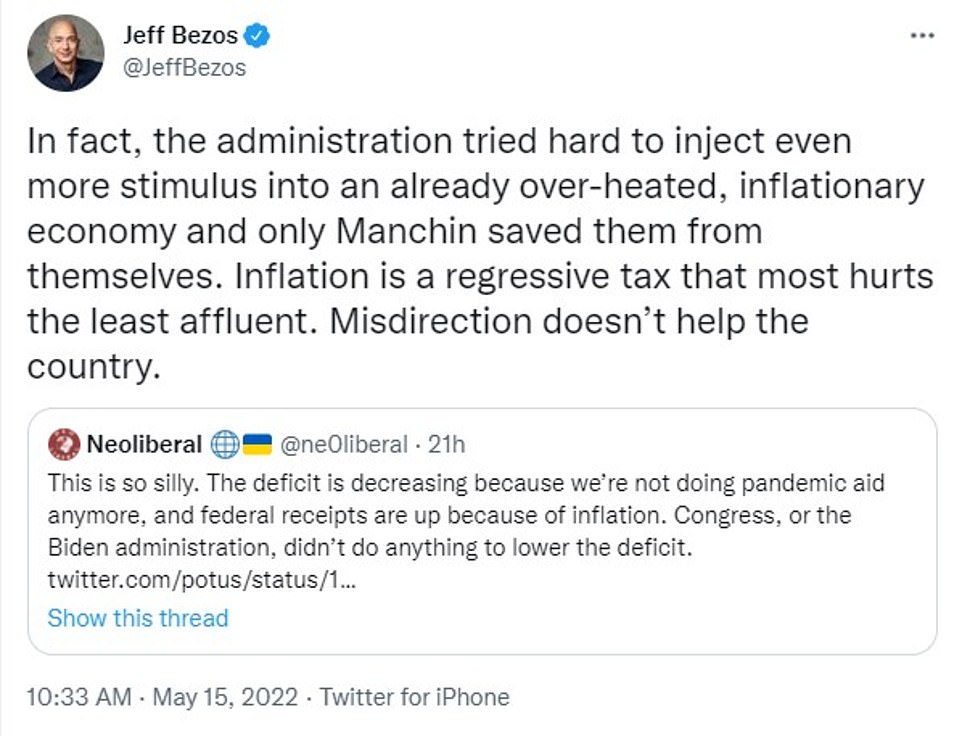 In addition to his battle with Biden, Bezos appears to be spending his time cherishing his romance with Sanchez.

On May 9, the pair attended a glitzy gala together in New York City after having been spotted holding hands as they entered a car.

The gala, known as the Robin Hood Benefit, raised more than $120 million for New Yorkers struggling with poverty.

Bezos raised $8 million at the fundraising event by auctioning off a seat in his Blue Origin New Shephard rocket that will go to space.

Though the Bezos Foundation donated over $10 million by the fundraiser’s end, the Amazon executive chairman’s value has been declining steadily over the past few weeks.

As of May 27, his net worth fell by $53.2 billion due to the tanking stock market. Bezos’ wealth is now valued at $139 billion, Bloomberg reported. 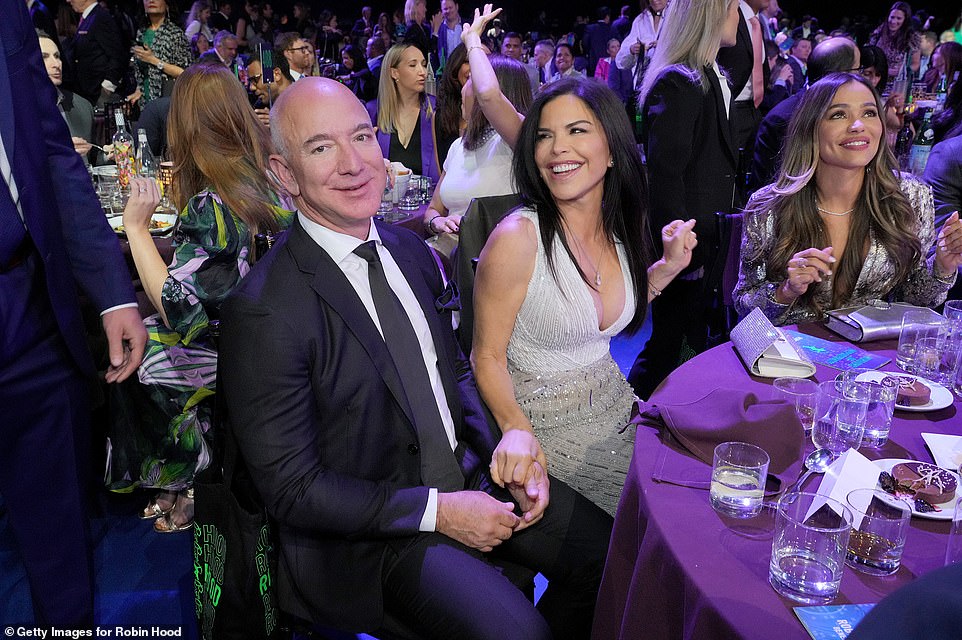 Bezos and Sanchez watched stars including John Legend at the Robin Hood Benefit 2022 gala in NYC on May 9, as celebrities raised more than $120 million for New Yorkers struggling with poverty

It’s unclear when exactly Bezos and Sanchez first got together, but their affair exposed by the National Enquirer in January 2019.

Bezos and Scott were married from 1993 to 2019 and share four children together.

They announced their separation back in January 2019 shortly before the billionaire’s affair with Sanchez was exposed.

Their divorce was finalized in April 2019 with Bezos keeping 75 percent of the couple’s stock and Scott receiving shares worth roughly $35 billion at the time.

Sanchez’s 14-year marriage to Hollywood agent husband Patrick Whitesell also came to an end after the affair was exposed.