Jared Kushner cut ties with his father-in-law Donald Trump, a new report has claimed – after the former president hosted Kanye West and renowned anti-Semite Nick Fuentes at his Mar-a-Lago compound for a dinner last month.

Once one of his closest advisors, Kushner – who is wed to Trump’s daughter Ivanka – has reportedly distanced himself from the 76-year-old, after news of his unlikely dinner procession surfaced.

The revelation was provided by insiders familiar with the matter, who told New York magazine that Kushner – who is Jewish – has reportedly ignored requests from Trump’s camp to help with the 76-year-old new presidential bid.

Instead, the former top Trump aide – who oversaw Trump’s most recent, ill–fated re-election bid – has taken to handing out the ex-head of state’s number to supplicants, so that they can call him directly to avoid acting as an intermediary.

If legitimate, the claims bolster previous reports the 41-year-old former fixer, along with his wife, are fed-up with the family patriarch, who announced his third campaign on November 15 – two days after welcoming West and Fuentes. 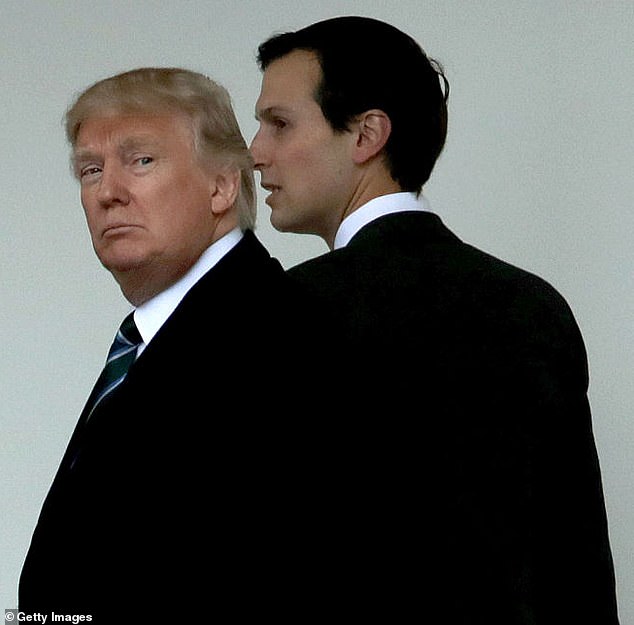 Once one of his closest advisors, Jared Kushner – who is Jewish – has distanced himself from the 76-year-old, reportedly because of the people he has been associating with 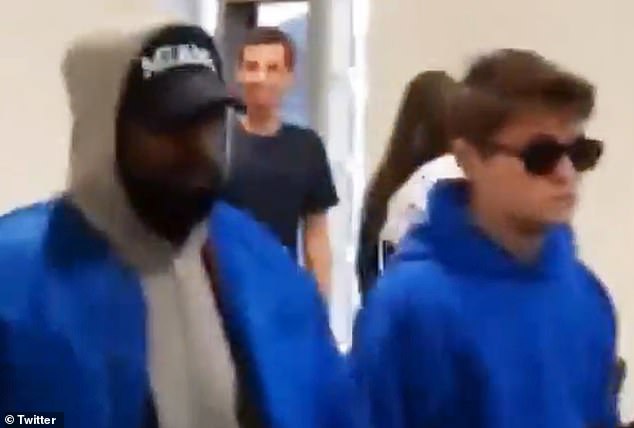 It came after after the ex-president hosted Kanye West and antisemite Nick Fuentes at his Mar-a-Lago manse for a dinner last month. The pair are pictured landing in Miami before the meet

‘He was like, “Look, I’m out. I’m really out,”‘ NY mag quoted one source as saying. The insider added that the dinner with Fuentes – an outspoken Holocaust denier and opponent of the GOP – was the last straw for the former fixer, who in the past would have been responsible for addressing such a controversy.

Another source, also speaking on the condition of anonymity, added the only reason Kushner was still in Trump’s camp, was because he felt a sense of ‘familial obligation.’

Spending four years as Trump’s senior advisor, Kushner was was present Trump’s campaign kick-off event at Mar-a-Lago last month. However, noticeably absent was Ivanka, 41, who also served as one of her father’s most trusted handlers.

Her absence at the time raised eyebrows, with the aspiring president’s eldest daughter issuing a statement that revealed that she has no plans to be involved in her father’s upcoming campaign.

Ivanka – who has been wed to the real estate tycoon for the past 13 years – quickly blamed her absence on the responsibilities of being a parent, She shares three young children with Kushner. 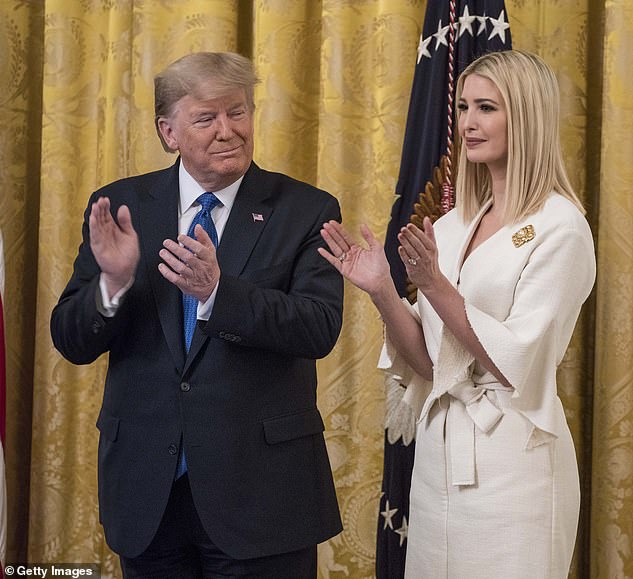 The revelation was provided by insiders familiar with the matter, who told New York magazine that the fixer – who is wed to Trump’s daughter Ivanka – has ignored requests from Trump’s camp to help with the 76-year-old renewed presidential bid

‘I love my father very much,’ the former first daughter wrote. ‘This time around, I am choosing to prioritize my young children and the private life we are creating as a family. I do not plan to be involved in politics.’

She went on to write that ‘while I will always love and support my father, going forward I will do so outside the political arena.

‘I am grateful to have had the honor of serving the American people and will always be proud of many of our Administration’s accomplishments.’

The statement came two day after Trump dined with the 45-year-old rapper and 24-year-old Fuentes, who has amassed a pronounced following online, and was present at the riots at the Capitol on January 6, 2021. His mission is to replace the GOP with a new party run under the pretense of being white nationalist.

The news is particularly striking, as in the past, addressing the fallout from the dinner would have fallen on Ivanka and surely Kushner, who took on the role in 2020 of his father-in-law’s de facto campaign manager.

Over the course of Trump’s presidency, Kushner – who made millions as a major player in the New York real estate market – addressed several controversies surrounding the politician, including several that saw him come under fire as an alleged antisemite.

Such instances include when the then-president shared an offensive image of a six-pointed star alongside a pile of money, and when he repeatedly told a group of Jewish GOP donors ‘I don’t want your money.’ 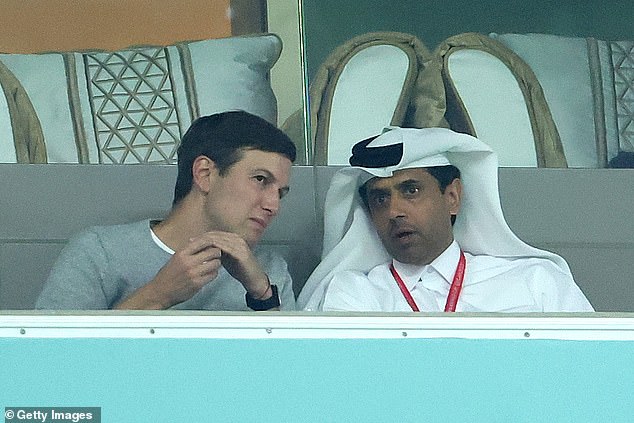 Another source, also speaking on the condition of anonymity, added the only reason Kushner seen speaking to Paris Saint-Germain President Nasser Al-Khelaifi during the World Cup, was still in Trump’s camp, was because he felt a sense of ‘familial obligation’

Kushner’s and his wife’s absence was felt almost immediately, when Melania, serving as a lukewarm replacement, defended her husband by simply insisting: ‘He’s not Hitler.’ Kushner and Ivanka are the only Jewish members of the Trump family.

That said, unlike his wife – who converted to Judaism when she married the former White House aide – Kushner did attend Trump’s campaign announcement in November.

Speaking confidentially to New York magazine, the second source said that Kushner had sent a ‘mixed message’ to Trump’s camp with his appearance, calling it ‘a combination of having respect for a family member and drawing clear lines for your life.’

Trump maintains that despite the notable absences, his entire family is ‘100%’ behind him.

That said, another source who spoke to the publication, an advisor to Trump’s 2024 campaign, provided a markedly different account, saying that virtually none of the politician’s family are in his corner this time around.

‘There’s nobody around him who wants him to do it,’ the unnamed aide said, adding ‘Forget Jared and Ivanka — Don Jr. doesn’t want him to do it!’

The source said that the ‘the only person’ supporting Trump’s run is his son Eric’s wife Lara, a former TV producer.

‘The only person who wants him to do it is Eric’s wife, Lara, because she’s so ambitious,’ the source said. 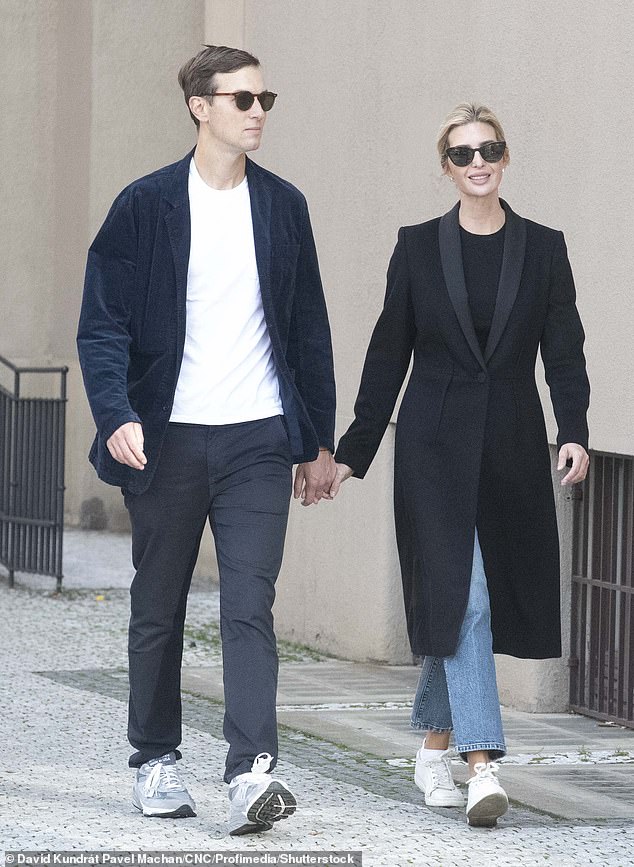 The news is particularly striking, as in the past, addressing the fallout from the dinner would have fallen on the pair, who served as some of Trump’s top aides during his presidency

West, meanwhile, has slammed Trump as a known liar – after the ex-president issued a statement calling the rapper a ‘deeply troubled man’, insisting he did not know Fuentes had been with him when he invited him for dinner.

The hip-hop star, who has come under fire for targeting Jewish people in a series of outbursts in recent months, was hosted at Trump’s Florida estate alongside white nationalist and Holocaust denier Nick Fuentes last week.

The dinner caused an outrage even among Republicans that the 45th president was entertaining Fuentes, a self-described homophobic white supremacist incel, and West who had recently been dropped by major brands for his disgusting bigotry.

After the backlash, Trump tried to distance himself from the meeting, and said he was only ‘trying to help a seriously troubled man’ in West.

But the rapper recently hit back at Trump on the Timcast IRL podcast with Tim Pool, saying: ‘I would have never wanted to do anything that hurt Trump.

‘I’m on Trump’s side. Trump said things that hurt me. He lied about me, but I mean, he’s known for lying.

‘I went into the trenches for Trump … There is no one in my position that wore that hat.’

West, who later stormed out of the live interview, also revealed that alt-right commentator Milo Yiannopoulos had arranged the meeting with Trump and Fuentes that has caused a storm in Washington.

The dinner was seen as Trump moving even further to the right by embracing high-profile racist figures.

At the time, both Ivanka and her husband were in the Middle East, with their three children, touring the pyramids and climbing on the backs of camels on their way to Qatar for the World Cup.

During the trip, the couple were reportedly joined by an employee from Affinity Partners, an investment firm Kushner founded in 2021, for which he has raised a reported $3 billion – with $2 billion coming from the Saudi government.

When asked why Kushner had attended his father-n-law’s campaign event, former Trump aide Sam Nunberg tod New York –  ‘half-jokingly,’ as the publication noted  -that Kusher attended ‘for the Saudis,’ referring to his business with the Gulf nation.