Jabs for ALL British 16 and 17 year olds ‘within days’: Nicola Sturgeon says she ‘expects’ advisory board to recommend lowering age limit this week

Vaccine regulators are set to give the green light to jabs for 16 and 17-year-olds in the coming days, Nicola Sturgeon said today.

The Scottish First Minister claimed advice from Britain’s Covid experts was expected imminently, in the hope that more children can be offered shots before schools and universities restart in September.

The UK’s Joint Committee on Vaccination and Immunisation (JCVI) has said some children with underlying health conditions should get jabs, but so far has not recommended a broader rollout of shots to under-18s.

The devolved Scottish government has control over its health policy, but the JCVI gives advice for the United Kingdom’s four nations on the rollout of vaccines.

‘I am hoping, possibly veering towards expecting, updated advice from the JCVI literally in the next day or so,’ she told the Scottish parliament in a virtual session. 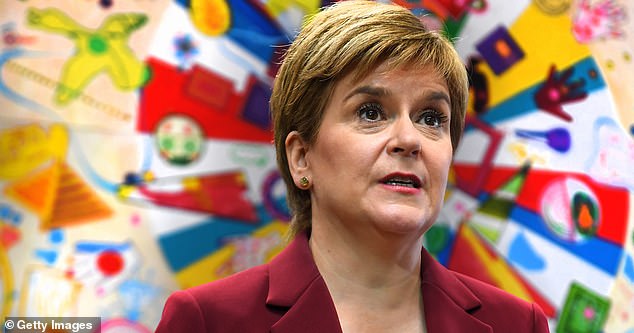 Vaccine regulators are set to give the green light to jabs for 16 and 17-year-olds in the coming days, Nicola Sturgeon said today

‘I very much hope that that expectation will prove to be the case.

‘I am hoping, but this is the JCVI’s advice, that they will recommend further vaccination of people in the 12 to 18-year-old age group.

‘But I’m particularly hopeful that we will see some updated recommendations in relation, as a priority as the first part of this, for 16 and 17-year-olds.’

She added that she was working on the assumption that there would be a booster programme in the autumn, following interim advice from the JCVI to prepare for one.

Shadow health secretary Jonathan Ashworth told the Huffington Post: ‘With the JCVI apparently about to give the green light to vaccinating 16 year olds, ministers need to ensure plans are in place to roll out this vital next stage of vaccination while ensuring parents have all the facts and information they need.’

A spokesperson for the department of health and social care (DHSC) said it continues to keep jabs for children under review and will be guided by the JCVI’s advice.

It comes after Ms Sturgeon was today accused of ‘clinging on to large parts of people’s lives’ as she revealed lockdown will officially end next week – but some laws will remain in place indefinitely.

The First Minister confirmed Scotland would exit Level 0, ending social distancing and limits in the size of social gatherings, on August 9.

But she said it was too early to declare freedom from Covid as she confirmed face coverings will still be required by law indoors and large events with capacities of more than 2,000 inside and 5,000 outside will have to gain special permission to take place.

Schoolchildren will also have to wear mask in lessons and socially distance in schools for six weeks from September.

But in a move that will heap pressure on Boris Johnson amid the English ‘pingdemic’, self-isolation requirements will be dropped if someone passes a PCR test from Monday, a week before the quarantine requirement ends in England.

Announcing that face coverings would remain mandatory the First Minister said it was ‘premature’ to suggest the pandemic had been beaten.

She also raised the spectre of some restrictions returning in winter, saying she could not rule it out.

But Scots Tory leader Douglas Ross accused her of ‘moving the goalposts’ by keeping masks and other measures in place.

‘There are some welcome steps in the right direction but these ongoing restrictions will hold Scotland back,’ he said.

‘We are beyond Level 0, at Level -1 or -2 and still the Government is clinging on to large parts of people’s lives.’