The expansive and twisted limbs of old eucalyptus trees spread out into the big Nagambie sky.

Grey box and yellow box gums host an array of bird species and nests, while brown snakes slither in dry, long grass below.

But an axe is dangling over 51 of these mature, majestic trees in this remaining stretch of native woodlands on the main road of the township, about two hours north of Melbourne. 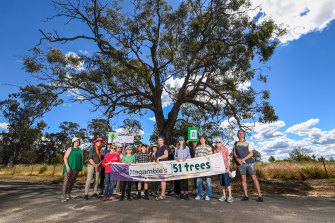 Residents opposed to the removal of 51 trees at the Elloura development in Nagambie. Credit:Justin McManus

The trees are set to make way for a “lifestyle village”, which is part of a new stage in the Elloura housing estate that backs onto the waters of Lake Nagambie.

Locals opposed to destroying the trees had challenged the Strathbogie Shire’s permit to clear the vegetation in the Victorian Civil and Administrative Tribunal last year.

But Planning Minister Richard Wynne intervened earlier this year and will decide for himself whether the trees should be allowed to stay.

Nagambie farmer Donna Winter-Irving remembers the soaring trees from her childhood when they were surrounded by farmland.

“It’s almost like a town forest,” she said. “It’s the green heart of Nagambie.” 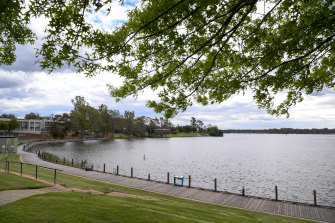 Lake Nagambie in the sun. The town’s population is set to double by 2035 with a rush of development under way. Credit:Eddie Jim

Ms Winter-Irving said she was working to regenerate native vegetation on her nearby property and was frustrated that longstanding trees of the same species had been earmarked for removal at Elloura.

“That just doesn’t make any sense to me.”

Last year, the Department of Environment, Land, Water and Planning wrote to the Strathbogie Shire, urging it to prevent the loss of “very high-value trees” that had been identified for removal, saying there was evidence the site contained tree hollows.

“These hollows take up to 80 to 100 years to form and are considered invaluable nesting habitat and are highly likely to contain wildlife,” the letter said. 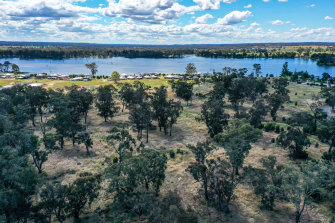 The view of the trees from the sky. Credit:Justin McManus

The department did not object to granting the permit but set out wide-ranging conditions, including a requirement for a qualified zoologist to be on site while trees were removed and the placement of nesting boxes to compensate for the loss of hollows.

The trees sit on a tract of land that separates existing houses on the 49-hectare Elloura development from the traffic of the main road.

Developer Hallmarc said it gained all the necessary approvals from the local council and Department of Environment, Land, Water and Planning.

Chief executive Michael Loccisano said the project was within a comprehensive development zone.

“We have gone through a rigorous planning process over an extended period of time,” he said.

Mr Loccisano said the project would retain 160 trees where the lifestyle village would be built and his company had worked to keep as much existing vegetation as possible.

“We don’t have room to move without completely compromising the project now.”

Longwood Plains Conservation Management Network chair Rhonda Robinson said a redesign could save many of the trees in the small tract of woodland and better incorporate it into the development.

However, she accepted not all of them were likely to be spared.

“We just wanted to save more of those high-value trees,” she said.

Strathbogie Shire councillor Reg Dickinson, who represents Lake Nagambie, said the town’s population was forecast to double by 2035. It is currently home to about 2000 people.

He said Nagambie had been considered a hidden gem, partly due to its closeness to Melbourne, expansive wetlands and favourable weather.

“Finally the penny has dropped with the developers,” Cr Dickinson said. “There are lots of applications going into the council.”

Cr Dickinson, who lodged a personal objection to removing the trees before he was elected to the council late last year, said the town could not afford to lose the natural habitat.

A government spokeswoman said Planning Minister Richard Wynne called in the native vegetation removal on the recommendation of Building Victoria’s Economic Recovery Taskforce. She said a decision would be made shortly.