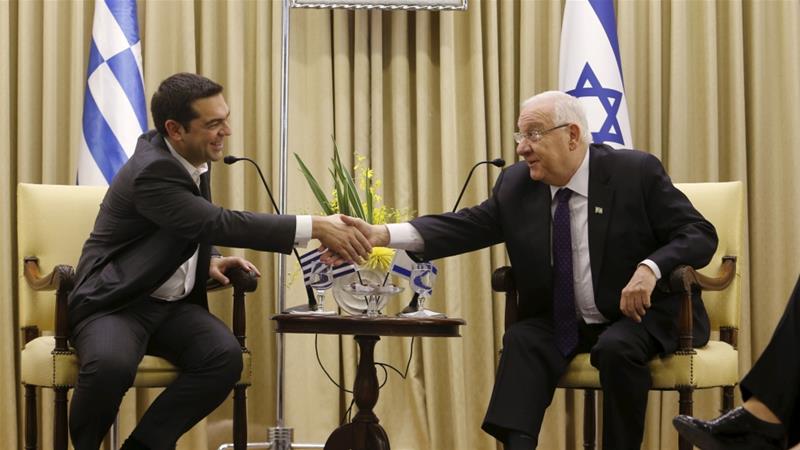 Athens, Greece – Israeli President Reuven Rivlin met Prime Minister Alexis Tsipras and President Prokopis Pavlopoulos of Greece in the capital, Athens, on Monday, amid criticism from left-wing groups and others.

Rivlin arrived in Athens on Sunday for a three-day visit, during which he will also meet members of the local Jewish community and travel with Tsipras to the northern coastal city of Thessaloniki.

Speaking to the Greek daily Ekathimerini, Rivlin described ties between Greece and Israel as “fruitful and strong”.

“Today, we are neighbours on the Mediterranean,” Rivlin said.

“We share opportunities, and we also share threats. Both our peoples have felt the earthquakes of the instability in the Middle East,” he continued, adding that the two countries “have a duty to stand together and face these challenges”.

A small Palestinian-led protest against Rivlin’s visit was held in Athens on Monday morning.

Syriza, the ruling party in the coalition government, came to power in January 2015 after running on a left-wing programme, but it has since garnered criticism from left-wing groups for reneging on its promises.

In December 2015, the Greek parliament voted to recognise a Palestinian state. Ties with Israel, however, have changed little since the vote, according to analysts and critics.

Israel has occupied the West Bank, including East Jerusalem, and the besieged Gaza Strip since the 1967 war.

Yara Hawari, the Palestine Fellow at Al-Shabaka: The Palestinian Policy Network, explained that Greece and Palestine “have historically had good relations”, citing long-standing left-wing solidarity with Palestinians and the religious affiliations of many Palestinians with the Greek Orthodox Church.

In the past, Syriza vowed to cut military ties with Israel upon coming to office, but those ties have nonetheless been deepened.

In 2015, Greece’s defence minister, Panagiotis Kammenos, signed a historic “status of forces” accord with Israel, paving the way for closer cooperation.

Since then, several joint military exercises have been held.

Kammenos is a member of the Independent Greeks (ANEL), a right-wing junior coalition partner in the Greek government.

“There was a lot of hope that this [solidarity] would follow through, and I was one of the people that was excited about a major European country electing a very pro-Palestinian party,” Hawari told Al Jazeera.

“It’s very clear that they are not going to cut [these] ties with Israel, and in fact that they will continue a positive relationship with Israel.”

Naim Elghandour, president of the Muslim Association of Greece, a civil society group that advocates for the rights of the religious minority in the country, explained that Syriza’s election had created hopes for a “fairer relationship” with Israel and the Palestinians.

“We are very disappointed in this government and how it has been boosting relations with Israel,” he told Al Jazeera, pointing to a long history of pro-Palestine solidarity in the country.

“This is why we’ve given up on [Syriza] regarding this … This is way beyond any justice.”

“One of the aspects is exploitation of the resources of the region, and the government and its supporters are hoping for benefits from those deposits,” he told Al Jazeera, referring to Greece’s growing energy cooperation with Israel.

“The other aspect is that … the Greek government seems to think it’s an opportunity to become the strong arm of imperialism in the region, which is completely stupid and can have catastrophic results for Greek people.”

In late December, Rubicon, an Athens-based anarchist collective, threw bottles of red paint at the Israeli embassy in the capital.

“We identify with the Palestinians, a nation that for decades has been a victim of oppression,” the group said in a statement released after the incident, a video of which was subsequently posted online.

“In reality, the Palestinians are pressured to leave their land. This is ethnic cleansing at a low intensity level for decades.”

Al-Shabaka’s Hawari argued that Syriza’s about-face on Israel and the Palestinians is “a very good example” of why “Palestinians cannot rely on support from political institutions” in Europe and elsewhere.

“It’s been a complete U-turn,” she concluded.

“We have to be very careful about looking for hope within these big political parties. At the end of the day, the political system is not one which will support Palestinian liberation.”