‘Sender: The Islamic State’: ISIS uses a poster featuring a drone over New York to threaten the West with attacks in wake of Gatwick Airport chaos

ISIS fanatics have used a poster featuring a drone over New York City to threaten the West with attacks in the wake of the chaos at Gatwick airport.

The mocked-up propaganda picture shows a drone hovering over the US city carrying a parcel saying: ‘private mailbox’.

In a separate caption, extremists have written: ‘Sender: The Islamic State’ while there are also pictures of previous atrocities claimed by the terror group.

It emerged as Gatwick finally re-opened its runway today after the Army deployed weapons to knock drones out of the sky.

The motivation of the drone operator, or operators, was unclear. Police said there was nothing to suggest the crippling of one of Europe’s busiest airports was a terrorist attack. 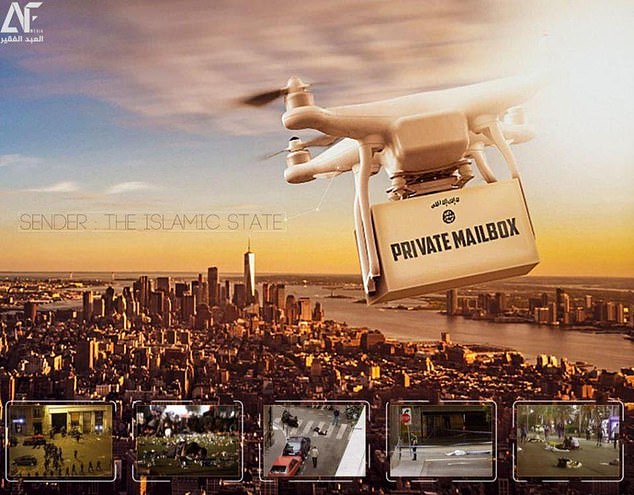 ISIS fanatics have used a poster featuring a drone over New York to threaten the West with attacks in the wake of the chaos at Gatwick airport. The propaganda picture shows a drone hovering over the US city carrying a parcel saying: ‘private mailbox’

This morning a jet carrying children to Lapland was the first plane to take-off at around 6.30am as 700 flights are now scheduled on the busiest travel day of the year – but the backlog may not be cleared until Christmas Eve.

The re-opening of the runway came after the final sighting of the drone at 10pm last night, which had buzzed over the airport more than 50 times since 9pm on Wednesday during the most disruptive airport trespass in UK history.

Detectives are investigating if the pilot is a ‘lone wolf eco warrior’ bent on grounding jets for environmental reasons and are scouring the area around the airport. 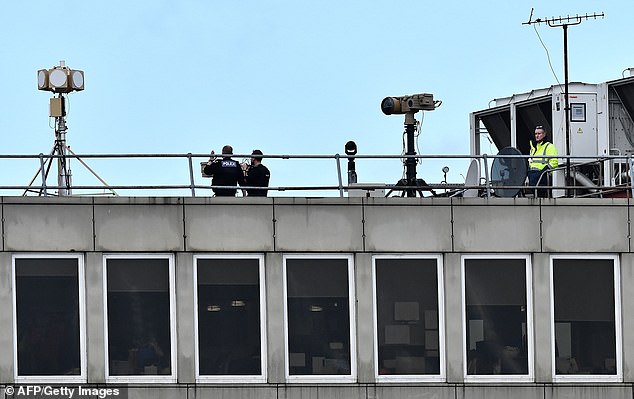 Transport Secretary Chris Grayling admitted today it could have been a larger gang of climate change activists flying several drones and refused to rule out the chance a hostile foreign country could be behind the Gatwick drone chaos.

Furious passengers whose Christmas trips were left in tatters have blasted the police who were utterly bewildered about how to stop the drone and refused to shoot it down despite having snipers dotted along the runway all day yesterday.

The threat was finally neutralised after the Army was sent in with ‘specialist equipment’ – believed to be a ‘kill-jammer’ that cuts a drone’s communications from up to two miles away and a ‘drone dome’ that shoots them out of the sky with a laser.