Istanbul: Iranians staged protests on Monday for the third straight day after Iran's military admitted it shot down a Ukrainian airliner it mistook for a hostile aircraft amid heightened tensions with the United States last week, killing all 176 people onboard. 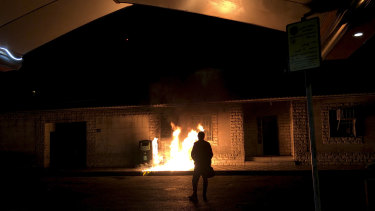 A man stands in front of a fire set amid demonstrations in Tehran, Iran, to remember victims of a Ukrainian airplane shot down by an Iranian missile.Credit:AP

Videos from Sunday night showed demonstrators fleeing from tear gas and in one case a woman bleeding from the leg – a wound that protesters said was caused by live ammunition.

"Is this the blood of our people?" one demonstrator said as he filmed a pool of blood on the street in Tehran.

In other videos posted on social media, which could not immediately be verified, sounds of gunfire could be heard at protests in Azadi Square in the capital, as well as in the city of Shiraz.

The fury at Iran's government marked a stunning turnaround for leaders in Tehran, after a US drone strike killed Iran’s Quds Force commander, Major General Qassem Soleimani,  earlier this month, prompting hundreds of thousands of Iranians to rally in a display of public mourning. 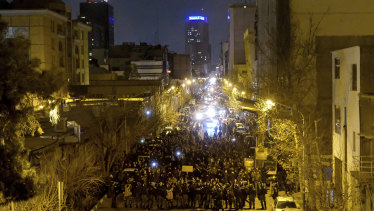 Demonstrators late Sunday were filmed in at least two locations tearing down posters of Soleimani. His death early January 3 prompted Tehran to retaliate against the United States, firing more than a dozen ballistic missiles at Iraqi military bases hosting US troops.

In the hours after the attacks early on Wednesday, Iran's Islamic Revolutionary Guard Corps shot down Ukraine International Airlines Flight 752 with a surface-to-air missile, a move it blamed on "human error."

Listed among the dead were 82 Iranians, 57 Canadians and 11 Ukrainians, including the crew. Most, if not all, of the Canadians were reported to be of Iranian origin or dual nationals.

In Vali-e Asr Square in Tehran, a large poster depicting Soleimani was replaced with a billboard mourning the victims of the crash. 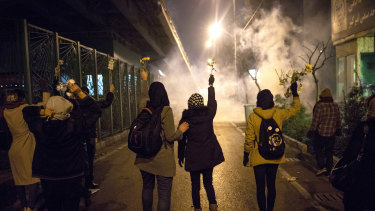 Protesters hold flowers as tear gas fired by police rises at a demonstration in front of Amir Kabir University in Tehran, Iran.Credit:AP

In a televised statement, Tehran's police chief denied that police shot at protesters and said they are under orders to show restraint.

"Police treated people who had gathered with patience and tolerance," Iranian media quoted Brigadier General Hossein Rahimi as saying, the Associated Press reported. "Police did not shoot in the gatherings since broad-mindedness and restraint has been agenda of the police forces of the capital."

"All of Enghelab Street until Azadi Square is full of security forces," said Sahar, 32, a resident of Tehran. Like other Iranians interviewed for this article, she declined to give her full name for fear of government reprisal.

Iranian security forces have cracked down hard on demonstrations and killed at least 200 protesters during unrest over cuts to fuel subsidies across Iran in November, according to rights groups. The Trump administration has put the death toll from those demonstrations much higher – it says some 1500 people were killed by security forces.

One of the scenes of a demonstration on Saturday night was Sharif University of Technology in Tehran, where people gathered at a vigil for the victims of the plane crash. The university said that 13 of its students and alumni were killed when the plane was shot down.

On Sunday evening, riot police fired tear gas at demonstrators gathered near the Shademaan metro station in Tehran, according to the New York-based Centre for Human Rights in Iran.

Protesters are calling for accountability in the accidental downing of the flight. Iranian officials initially denied reports that the plane was brought down but later admitted that the Revolutionary Guard, which maintains military bases in the area of the crash, shot it down by mistake.

Officials and state media issued apologies for failing to report accurately on the crash.

The official Islamic Republic News Agency published a searing statement from the Tehran Association of Journalists on Monday decrying the state of media in Iran.

"What endangers this society right now is not only missiles or military attacks but a lack of free media," the association said.

"Hiding the truth and spreading lies traumatised the public," the statement continued. "What happened was a catastrophe for media in Iran."

Government spokesman Ali Rabiei said Monday that Iran's military should be commended for accepting responsibility for downing the airliner and that the government would emphasise transparency in the investigation going forward.

"What is missing is the voice of the people," students at the Amir Kabir University of Technology in Tehran, another site of recent protests, said in a statement.

John Aldridge: 'The four reasons why I would urge Jurgen Klopp to reconsider his FA Cup stance'

January 29, 2020, Comments Off on John Aldridge: 'The four reasons why I would urge Jurgen Klopp to reconsider his FA Cup stance'

January 29, 2020, Comments Off on Maryland Cop Who Killed Handcuffed Man Charged With Second-Degree Murder
We and our partners use cookies on this site to improve our service, perform analytics, personalize advertising, measure advertising performance, and remember website preferences.Ok