Inflation edges up to 0.6 per cent as summer clothes sales fail to materialise and prices for computer games rise during lockdown

Inflation has edged up as summer clothes sales failed to materialise and prices for computer game rose during lockdown, it was revealed today.

Official figures showed the annual CPI measure was up from 0.5 per cent to 0.6 per cent last month.

Economists said that price increases for toys and games were a particular driver for the return to inflation growth.

Prices across the category grew by 1.8 per cent, compared with a 4.7 per cent fall a year ago, as the virus impacted demand and availability of some games. 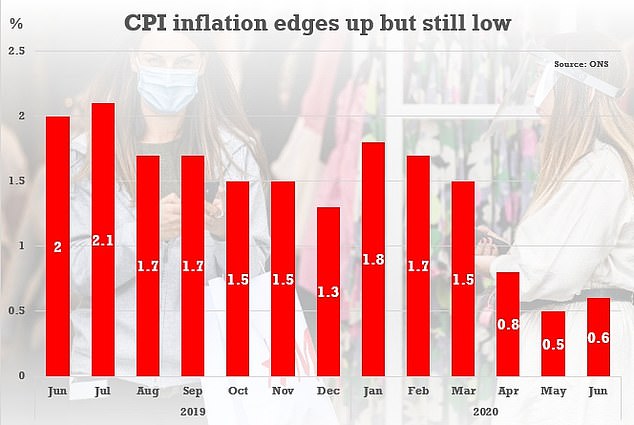 Official figures published today showed the annual CPI measure was up from 0.5 per cent to 0.6 per cent last month

Falls in the price of vegetables offset other rises to keep the change relatively small.

The rate of inflation remains well below the Bank of England’s target of 2 per cent.

Jonathan Athow, deputy national statistician for economic statistics at the ONS, said: ‘The inflation rate has increased for the first time this year, but remains low by historical standards.

‘Due to the impact of the coronavirus, clothing prices have not followed the usual seasonal pattern this year, with the normal falls due to the start of the summer sales failing to materialise.

‘Prices for computer games and consoles have risen, but food prices, particularly vegetables, have fallen.’