A mermaid-looking woman is painted on the wall of a new pedestrian underpass near Carrum train station. Part-sea creature, part-goddess, she is surrounded by pastel-coloured waves that swirl and crash into golden sandbanks.

She is an ancestor of the Bunurong people, says Adam Magennis, a traditional owner and lead artist behind the mural. 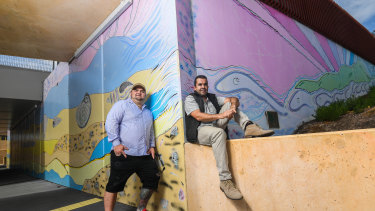 Her male counterpart is painted on the other side of the Eel Race Road underpass, which opened late last year as part of the $588 million removal of four level crossings in Carrum, including the construction of a new station there.

In setting out to imprint his people’s story on the walls of the underpass, Magennis got in touch with other local Indigenous artists. Together, they imagined “stripping it back – all the historical, colonial landscape we see now,” he says.

At the height of winter last year, the team imagined a coastal lagoon. With hand warmers stuffed in gloves, they painted pink and purple rays of sunshine and shells wedged into sand. A platypus in the mural farewells a number of eels migrating north to a tropical spawning ground. “The platypus is saying ‘bugger off, on your way’,” Magennis says. 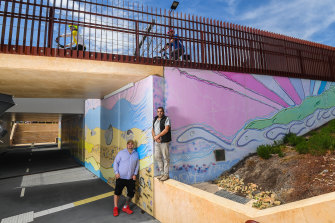 Eamon Roberts and Adam Magennis with their work.Credit:Justin McManus

Magennis is one of the artists working with Allan Murray, a Dhudhuroa-Yorta Yorta man, who is encouraging the Andrews government to build Indigenous art and culture into the very walls and pavements of its $13.3 billion program to remove 75 level crossings.

“There’s been a bad relationship between major projects and the Aboriginal community for a long time,” Murray says. “Because, as we see it, all major projects – or any projects – are taking place on traditional land.”

An ongoing stoush that has halted the government’s duplication of the Western Highway – a project that is opposed by some Djab Wurrung traditional owners due to the felling of trees they deem sacred – is the “worst case scenario,” Murray says.

“It’s what happens when traditional owners are not engaged early on”, he says. ”We need to have the conversation when the project is at its feasibility or business case end.”

The former AFL player for Port Adelaide and St Kilda has worked everywhere from the education to justice departments, to the homeless and employment sectors and even former aboriginal affairs minister Natalie Hutchins’ office to advocate for better outcomes for Indigenous people.

Now, as an adviser to design consultancy WSP, he is trying to facilitate better relationships between government and traditional owners on infrastructure projects, starting with the level crossing removal program.

He wants traditional owners to “co-design” the projects, so they can “influence some of the design with our cultural values, and stories about our Country that have been around for thousands of years”.

There are creative ways to weave Indigenous culture and stories into the station’s designs, Murray says.

For instance, what was set to be a drainage pit at Carrum station offered up an opportunity to build a yarning circle – a place where Indigenous people have for centuries gathered to share stories and pass on cultural knowledge. 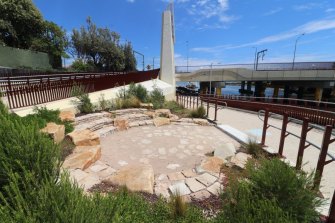 Large stones and boulders create the outline for the circular area, which is surrounded by Indigenous plants that can be used for bush medicine or food. The space is used by traditional owners educating school groups and locals.

In another example, concerns about graffiti at the Eel Race Road and Seaford Road underpasses were solved by inviting Magennis to paint murals, because he is considered an “elder in graffiti world” and his work goes untouched.

Level Crossing Removal Project’s chief executive Kevin Devlin says there has been an attempt to improve the agency’s relationship with traditional owners in the six years he has headed the agency. He admitted this had been a learning curve for the organisation.

“We didn’t exactly know how we were going to do that on day one,” he says.

But the enormous task of building 150-kilometres of new rail track, 30 new train stations, renewing power and signalling and building many kilometres of new pedestrian and cycling paths – what Mr Devlin describes as “urban villages” – has presented an obvious need to engage with elders, he says.

“There is an awakening about what role the government can play to sort of lead the Victorian and Australian communities in having more engagement with Indigenous communities,” he says.

The agency is writing an “urban Indigenous design guidelines” together with Indigenous advisers including Murray, which will be distributed to staff and the 4000 people working across the alliances to advise on ways of incorporating Indigenous culture into the new station precincts, he says.

Mr Devlin cites the agency’s work with the Waddawurung traditional owners on the design of the new Werribee Street level crossing removal works in Werribee, which was inspired by Murray’s work at Carrum. There, a yarning circle is being built and a track of emu footprints following the emu’s walk to the Werribee River will be imprinted across the precinct.

Murray says the city’s rail lines traverse Aboriginal songlines and it was important that transport infrastructure reflects this.

“Where you’ve got all these train lines, there are songlines and traditional stories all the way through.”