New Delhi: Just before midnight on the eve of the biggest political change in Indian-administered Kashmir in decades, authorities shut down internet access, mobile and landline phones and cable TV in the disputed region home to 12.5 million people.

Prime Minister Narendra Modi's Hindu nationalist-led government presented an order in Parliament on August 5 revoking the autonomy of India's only Muslim-majority state. The following day, lawmakers passed a bill to split the state, Jammu and Kashmir, into two federal territories. 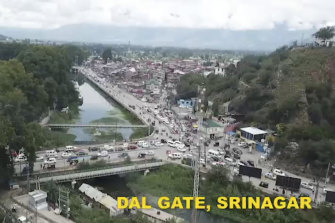 Government officials have filled the communications void by asserting the changes have widespread acceptance in Kashmir, across India and internationally – a portrayal that hasn't stood up to scrutiny.

Kashmir has been disputed territory since 1947, when India and Pakistan won independence from British rule. Each claimed Kashmir and they have fought two of their three wars over it, with each now administering part of it. 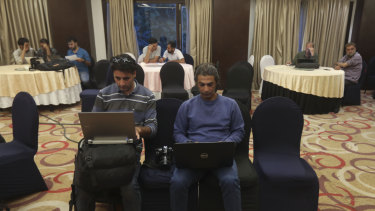 Journalists work inside a media centre set up by Jammu and Kashmir authorities in Srinagar, Indian controlled Kashmir.Credit:AP

The government later conceded that the news video wasn't fake but continued to maintain that no protest involving more than 20 people had taken place, despite video evidence to the contrary.

On August 10, the start of the three-day Islamic festival of Eid al-Adha, India's foreign ministry released a slew of photos and videos. In one, an aerial shot showed brisk vehicle traffic on a bridge. Another showed a busy square in Srinagar, the region's main city, and another a crowded intersection on the road leading to Srinagar's famed attraction, Dal Lake. Another was labelled Pulwama, one of Kashmir's most restive districts, and showed streets humming with activity and not a soldier or barricade in sight.

None of these scenes matched independent news reports.

The curfew was briefly eased for Islamic Friday prayers, but the following morning, many people remained indoors, with shops and most health clinics closed. 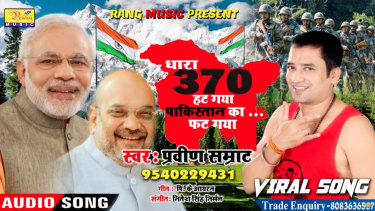 Another set of images released by the foreign ministry on August 12 depicted men and boys kneeling in prayer outside mosques in Jammu and Kashmir. But some of the region's largest mosques were closed, and others in the government videos were mislabelled, purporting to show mosques in Kashmir but actually showing worshippers in Jammu, where the Hindu-majority population supports the government's moves.

Worried that the world was getting a distorted view, Kashmir Times executive editor Anuradha Bhasin filed a Supreme Court petition demanding an end to the communications restrictions, which she said were hampering the work of her staff. The court on Wednesday ordered the government to reply to the petition within seven days.

By limiting the ability of journalists to report on the region, she said, the coverage of Kashmir has been overwhelmingly biased in favour of Modi.

"They are also giving a one-sided picture," she said.

The Press Council of India, a media watchdog statutorily tasked with ensuring freedom of the press, has tried to intervene in Bhasin's case with its own petition, defending the ban as "in the interest of the integrity and sovereignty of the nation".