A charge of indecent assault has been withdrawn against Jordan De Goey and police have been ordered to pay the Collingwood star’s legal costs.

The 24-year-old appeared via video link from his lawyer’s office on Monday morning, when the Melbourne Magistrates Court heard the single charge of indecent assault had been withdrawn by the prosecution. 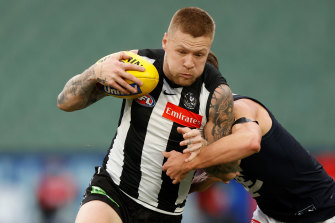 Jordan De Goey in action for Collingwood in July.Credit:Getty Images

The same charge was also withdrawn against his co-accused Jack Edginton.

The pair were charged last year and accused of indecently assaulting a woman in Kew on June 21, 2015. Mr De Goey was 19 at that time and in his first year with the Magpies.

The case was due to be heard at a contested committal on Monday, but instead prosecutor Helen Spowart confirmed both matters were being withdrawn.

Mr De Goey’s lawyer Dermot Dann, QC, said in light of the “successful outcome” for his client, he would be making an application for legal costs.

He said Mr De Goey sought $15,000 from police, which was not opposed by the prosecution.

A similar application was made by Mr Edginton’s lawyer for $6300. The magistrate ordered police to pay the costs within three months.

Mr De Goey, dressed in a suit and wearing a black face mask, did not speak during the short hearing.

Police, Collingwood and the AFL’s integrity unit investigated the alleged incident in 2018, but Mr De Goey was not charged until July last year.

He was not stood down by his club or the AFL after he was charged but missed a large chunk of last season after he suffered a finger injury in round seven. He returned to play the last four games.