A NEWBORN baby girl was found alive floating in a wooden box down the River Ganges in India.

Boatman Gullu Chaudhary was travelling down the river to Uttar Pradesh, a state in the north of India when he heard cries from the infant. 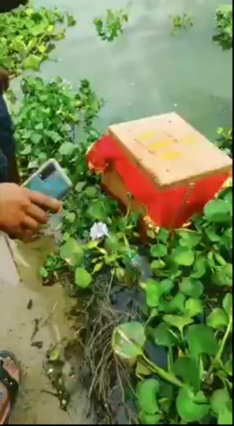 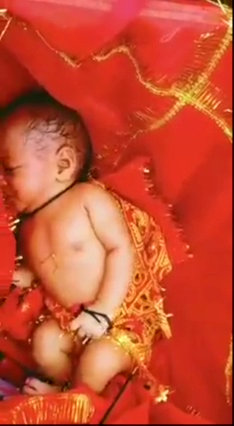 The 21-day-old girl was discovered on June 14 wrapped in a red scarf in a box decorated with images of Hindu gods.

Footage shows the moment the box was dragged in from the bank and opened by Mr Chaudhary while a crowd moves around him.

The boatman then took the little girl in his arms and was rushed to hospital.

According to reports the newborn was deemed healthy and was discharged.

She will be taken into social care.

Mr Chaudhary told local reporters that others who heard the girl's cries simply ignored it.

"But I rushed to rescue her," he said.

"When I opened the wooden box, I found her."

Local police said the box had contained a horoscope card with the time and date of her birth. 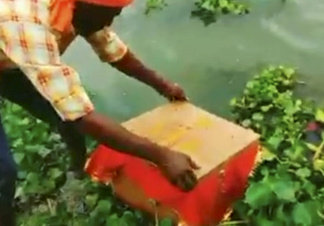 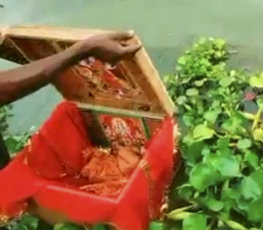 It also mentioned her name as Ganga – the Hindi name for the River Ganges.

Officials are continuing to investigate how the baby ended up in the river.

According to the BBC, the state government said it would cover the costs of the baby's care.

Chief Minister Yogi Adityanath announced that Mr Chaudhary would be rewarded with a house and government benefits for showing a "matchless example of humanity".

Although it has not been confirmed that the girl was abandoned because of her gender, however, female infanticide rates in India are among the highest in the world.

Last month, dozens of Covid-infected bodies washed up on the banks of the Ganges during the Coronavirus pandemic in the country.

The corpses were filmed piling up at the banks of the waterway at Chausa town in the northern state of Bihar.

Officials say the bodies floated down from Uttar and belong to Covid patients whose families may have been unable to cremate or bury them.

India has been engulfed in a virulent strain of Covid, which has now spread to the UK, leading crematoriums to be overwhelmed by the numbers of dead.

India has recorded more than 29 million cases of Coronavirus – second only to the US.