This is the incredible moment a waterspout swirled like a tornado over the sea in Cyprus in front of mesmerised spectators.

Sightseers captured the spectacular natural phenomenon off the coast of Kyrenia, Cyprus on New Year’s Day.

The swirling vortex of water curves through the clouded sky and into the water causing the ocean to spray up in its path. 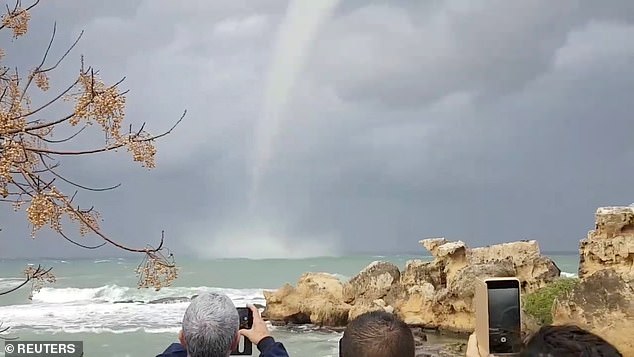 Sightseers captured the swirling waterspout off the coast of Kyrenia, Cyprus on New Year’s Day

It reached its peak in the middle of the sea, forming an enormous hollow-looking vacuum.

And the waterspout appears to move shape and head closer towards land.

Spectators can be heard shouting in awe as they stand and film the spectacular sight.

A waterspout is a whirling column of air and water mist which forms when cumulus clouds grow rapidly. They can rise hundreds of feet into the air.

Waterspouts were not common in Cyprus until recent weather with choppy seas and high winds caused them to form. 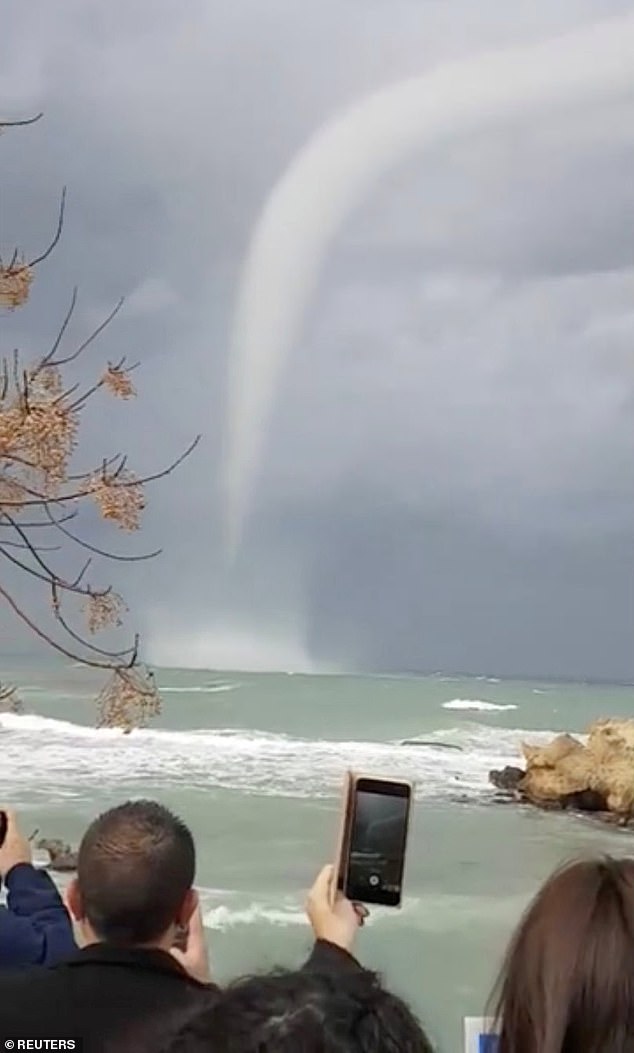 It reached its peak in the middle of the sea, forming an enormous hollow-looking vacuum. And the waterspout appears to move shape and head closer towards land

WATERSPOUTS: DEADLY FUNNELS THAT CAN RISE HUNDREDS OF FEET

What are they and why do they form?

Waterspouts are whirling columns of air and water mist.

They form when cumulus clouds grow rapidly. These clouds are detached, fluffy-looking and cauliflower-shaped.

Cumulus clouds develop due to convection. This is when hot air rises and cools to form water vapour, which then condenses to form clouds.

They fall into two categories: ‘fair weather’ and ‘tornadic’

These are tornadoes that form over water, or move from land to water, and develop downwards during thunderstorms.

They have the same characteristics as a land tornado and can be accompanied by high winds and seas, large hail and lightning.

These usually form along the dark flat base of a line of developing cumulus clouds and develop upwards from the surface of water.

They are not generally not associated with thunderstorms and form in light wind conditions so don’t normally move very much.

The five stages of formation

1. Dark spot: A light-coloured disk appears on the water’s surface surrounded by a larger darker area

2. Spiral pattern: A combination of light and dark patches on the water spiral out from the dark spot

3. Spray ring: A ring of sea spray appears around the dark spot

5. Decay: The funnel and spray vortex begin to dissipate as the inflow of warm air into the vortex weakens