After its one-week suspension for breaching Google’s COVID-19 misinformation policies, Sky News Australia returned to YouTube on Thursday evening with a dramatic all-singing, all-dancing assault on the American-owned tech giant.

“When big tech censors opinion for some but not for others, it’s a dark day for free speech,” boomed an ominous voice over. “Will you allow it? Freedom of debate and conversation should not be cancelled. Your freedom to think should not be extinguished.” 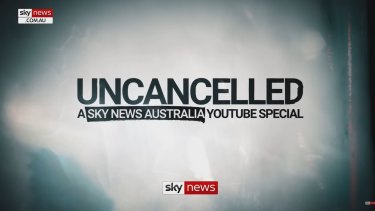 Uncancelled: Sky News uploaded a “YouTube special” to the platform on Thursday night when the suspension lifted.Credit:YouTube

Sky News digital editor Jack Houghton went on to lament that “conservatives seem to be the only people ever to be locked out of the national conversation”, and while YouTube might be great at coding, “tech geeks in Silicon Valley are not very well-versed at nuance on difficult social issues”.

And host Chris Kenny put it this way: “This is cancel culture writ large. This is censorship … a US company banning Australians talking to Australians and the rest of the world”.

In one of the banned videos, veteran broadcaster Alan Jones claimed COVID-19 was not by definition a pandemic and that India’s death toll was not really as bad as portrayed. The World Health Organisation declared COVID-19 a pandemic in March 2020. Other clips promoted hydroxychloroquine and ivermectin as COVID-19 treatments.

This firebrand commentary has a particular appeal among the world’s far-right and anti-vaxxers, and has helped give Sky News Australia a global platform with 1.9 million YouTube subscribers.

But is it dangerous enough to be banned? And in a sea of misinformation and competing claims related to COVID-19, who gets to decide which contentions and opinions get censored and which are disseminated to the public?

Coatsworth was critical of the ABC’s coronavirus commentator Norman Swan after he told ABC News Breakfast on Tuesday that Sydneysiders were “guinea pigs” in an experiment of using vaccination to try to arrest an outbreak. “I don’t think this has been tried anywhere else in the world,” Swan said.

“No, Dr Swan, they are not guinea pigs,” Coatsworth responded. “Rapid vaccination during an epidemic is part of epidemic control. And it’s what every other country has done with COVID-19.”

On Saturday, UNSW adjunct professor Bill Bowtell tweeted that NSW’s COVID policy settings were “closer to those in Florida” than other Australian states or New Zealand, even though Florida has rejected lockdowns. Coatsworth replied: “The Australian media cannot let this sort of hyperbole go unchallenged. The community should just ignore it.” 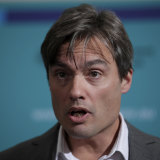 Coatsworth says these comments – as well as infectious diseases expert Michelle Ananda-Rajah’s remarks on Q+A in February that mass vaccination with AstraZeneca was a “population-level experiment” – are as bad as right-wing conspiracies about COVID-19 or vaccines.

“There is no difference between that and an anti-vaxxer saying ‘you’re conducting experiments without knowing the consequences’. What is the difference? It’s exactly the same language,” Coatsworth tells The Sun-Herald.

“The problem with the pro-lockdown, zero-COVID view is although it seems like it’s a lot nicer and a lot more credible than anti-vaxxer [content], you could still end up in a pretty dark place if you try and push for COVID-zero against the Delta variant.”

Coatsworth does not advocate censorship in either case but says people who hold themselves up as experts need to be held to account firmly and publicly. Meanwhile, Swan stands by his remarks, saying NSW’s approach would show whether the Doherty Institute’s modelling for reopening based on vaccination levels would work.

“I can be criticised for calling that an experiment,” Swan says. “I wasn’t sure that was the right word to use – but we don’t know yet the extent to which it will work.”

At News Corp, which owns Sky News Australia, some high-profile commentators circled the wagons in defence of their colleagues. The Australian’s columnist Peta Credlin called YouTube’s decision “a serious infringement on liberty”. Censorship wasn’t necessarily wrong on every single occasion “but it certainly shouldn’t be [left to] the commercial or political judgment of a functionary in California against which there’s no recourse,” she wrote. The same newspaper’s investigations editor Sharri Markson said Sky’s suspension was “the most extreme cancellation of free speech imaginable”.

But Chris Mitchell, a long-serving former editor-in-chief of The Australian, takes a somewhat different view. He recalls watching an Alan Jones interview with independent (and former Liberal) MP Craig Kelly in which they misrepresented the UK’s COVID-19 data to assert the Delta strain was far less deadly than portrayed – without accounting for the UK’s very high vaccination rate.

“I said to my wife ‘this is going to cause trouble’,” Mitchell says. “I follow the figures pretty closely. They misread the numbers quite badly, which is pretty dangerous.” 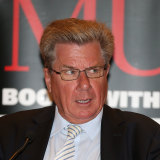 Sky News issued a correction and removed the segment from its platforms. Jones was also slammed by 2GB’s Ray Hadley and the ABC’s Media Watch over the “breathtaking” broadcast.

Mitchell says that’s a fair cop: Jones got it wrong. But YouTube’s move against Sky was surprising “given the amount of mad right-wing conspiracy stuff” that appears elsewhere on the platform, he says. “There’s a lot of QAnon stuff on YouTube that’s a lot harder to the right than anything Alan Jones has ever said.”

However, Mitchell doesn’t think YouTube’s decision is as serious as some commentators, including those inside News Corp, make out. “I’d say to all of them: this is not a huge deal, [it’s] seven days and a handful of videos.”

Neither does Mitchell see any reason for misinformation to be left online. “I don’t think there’s a problem with people censoring incorrect facts,” he says. “At one level, free speech is an important value and all journalists should support free speech and free media. But that doesn’t really include the freedom to spread untruths knowingly.”

The question then comes back to: who makes these calls? Should YouTube be the sole arbiter of what Australians can see on its platform, even when that content is produced by a large media company? Or is there a role for the government regulator, the Australian Communications and Media Authority (ACMA), to get involved?

Chris Chapman, a former chair of ACMA and now president of the London-based International Institute of Communications, says these are big questions for lawmakers around the world, who need to consider whether it is satisfactory that a social media platform can make these editorial decisions and whether there is enough transparency around how they make their decisions.

The same issues were at play in Facebook’s decision to suspend Donald Trump’s account, says Chapman, who argues there is a growing need for parliaments to “reassess all legislation to test whether it is ‘fit for purpose’ in what is now in reality a post-digital world, and rebuild from a ‘first principles’ perspective”.

Executive director of the free market Institute of Public Affairs, John Roskam, has by his own declaration a “pretty extremist” attitude to free speech. But while he is no fan of YouTube’s censorious decision, he says it is not a freedom of speech issue.

“A private organisation such as YouTube must have the right to decide what is on its platform. It must. Is it censorship? Yes it is. Should it be regulated? Probably not.

“The alternative of giving the government the power to decide what is on private organisations’ platforms is much worse than any private censorship. The idea of [Communications Minister] Paul Fletcher ringing up Google to say ‘fix up YouTube in Australia’ is a joke.”

Stay across the most crucial developments related to the pandemic with the Coronavirus Update. Sign up to receive the weekly newsletter.