EXCLUSIVE: Blood-saturated mattresses wrapped in white covers are hauled out of Idaho house where four students were knifed to death in their beds as investigators finally begin removing victims’ belongings after suspect was charged

Investigators from the Idaho State Police have begun removing furniture from the Moscow rental home where four University of Idaho students were stabbed to death – just one day after their alleged killer was formally charged.

Dark blood-like stains and blotches can be seen through the cover at the top of one of the mattresses.

Five cardboard boxes – believed to contain possessions that belonged to the victims and their two surviving roommates – and two white trash bags were also loaded onto the trucks. One of the bags contained a clothes rack. 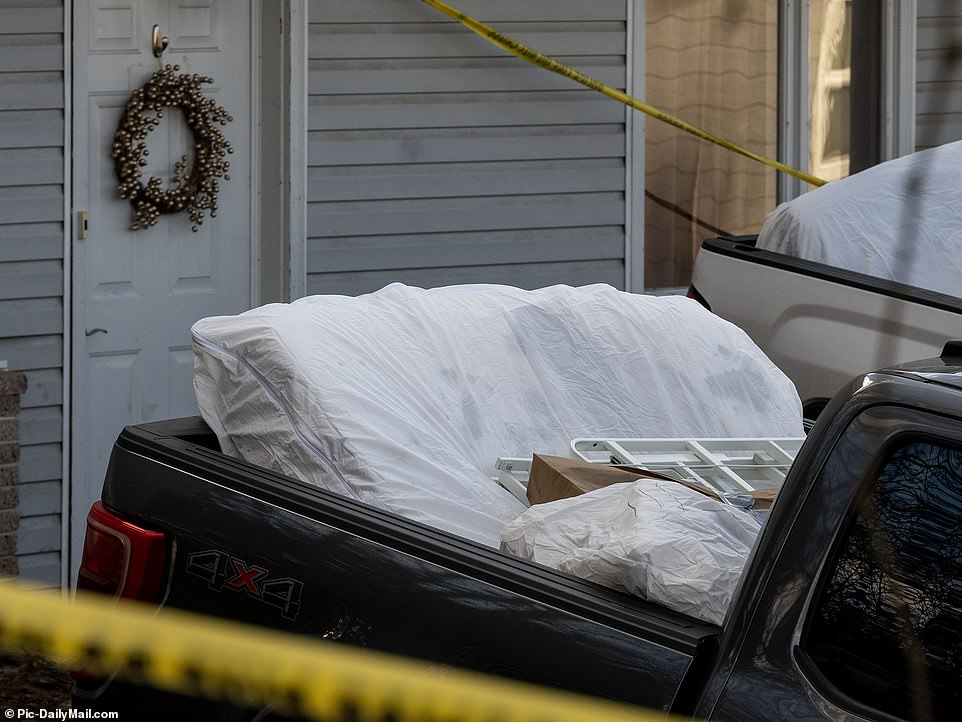 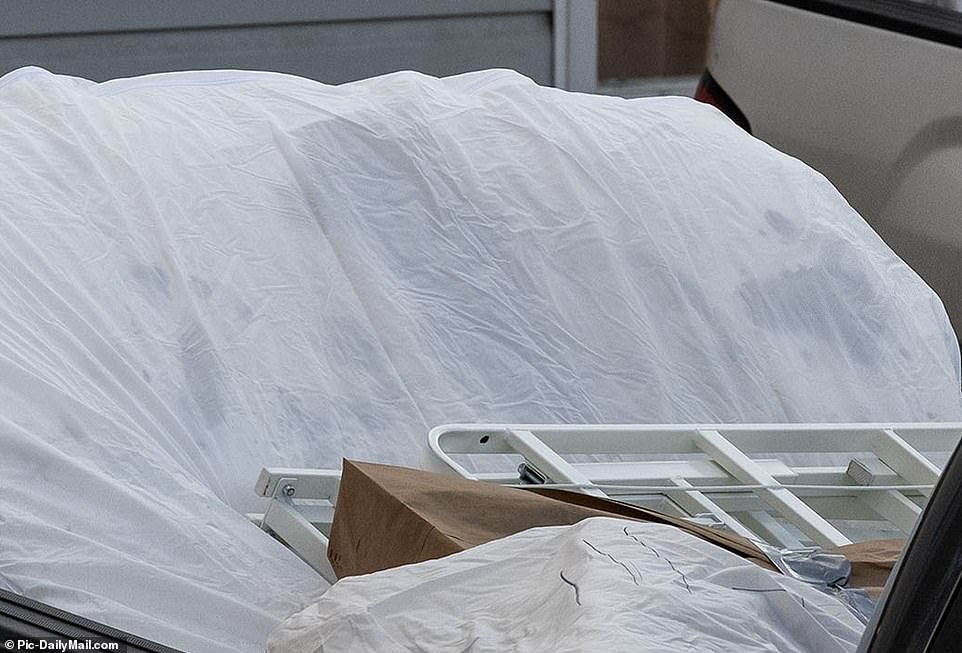 Two mattresses covered in white plastic were loaded onto trucks that pulled up just after 1pm Friday, with a dark stain visible on one of the mattresses 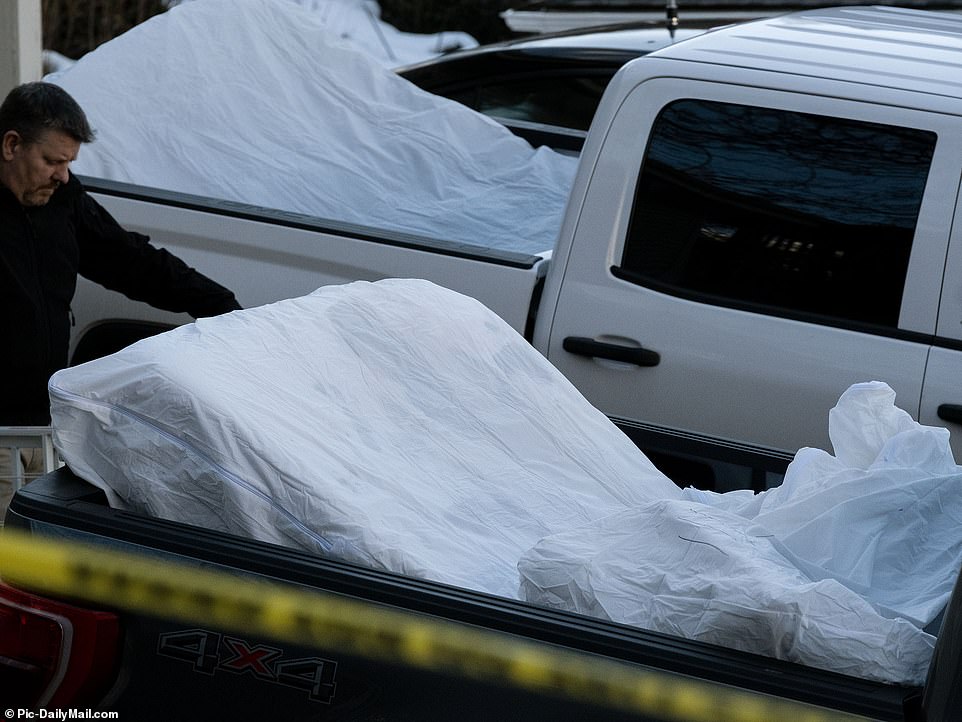 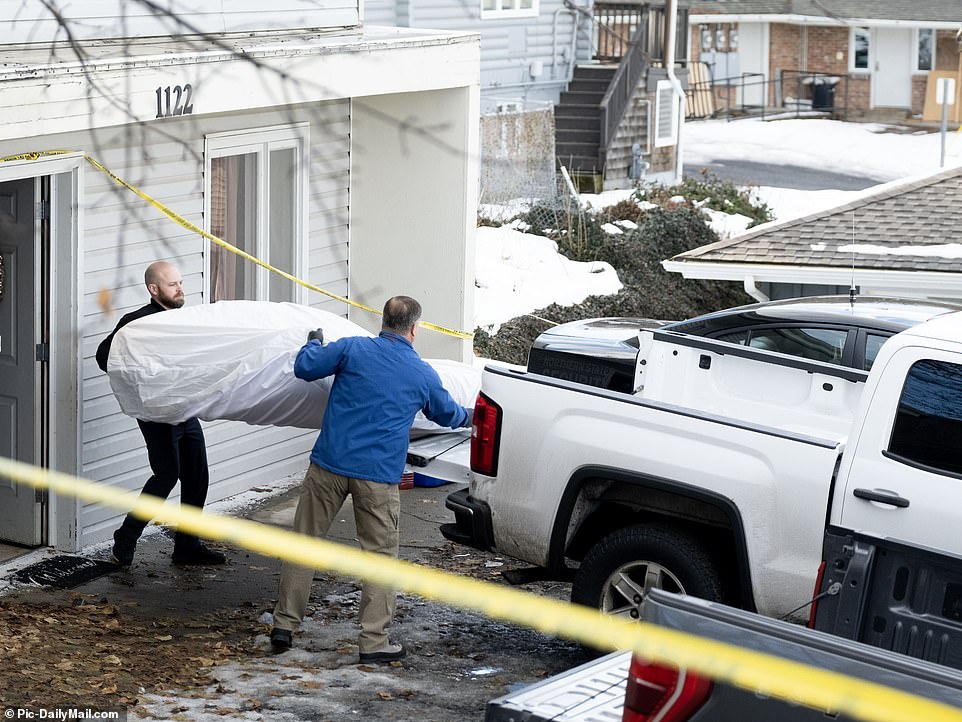 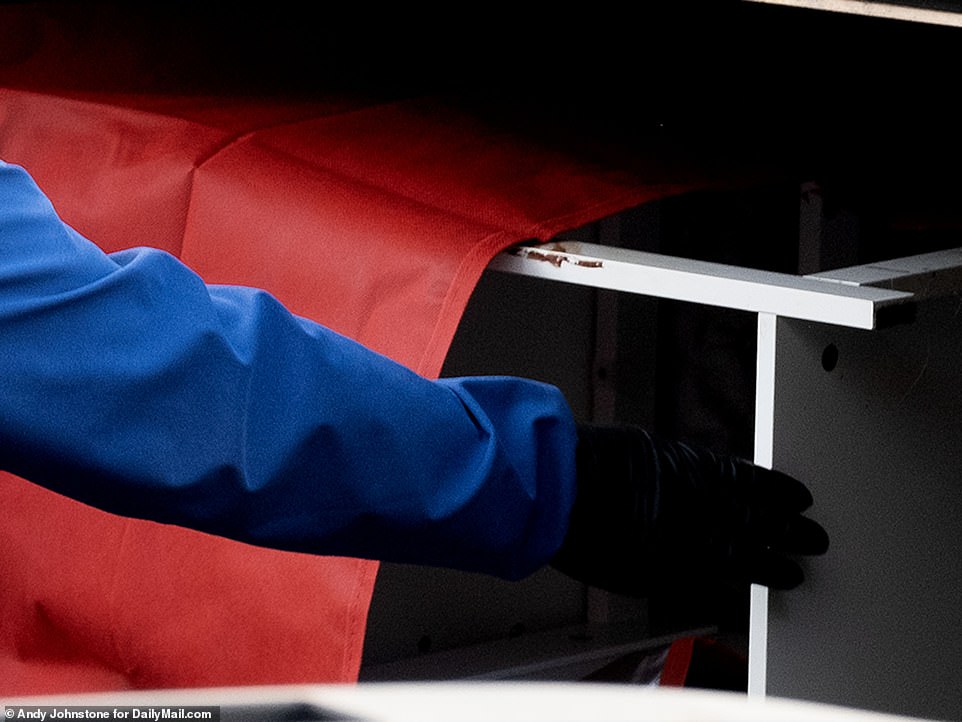 The removals come a week after a planned house clearance was halted just as it began after alleged killer Bryan Kohberger’s defense team were granted an order that preserves the scene.

Kohberger’s lawyers applied for the order on December 30 – the day he was arrested at his parents’ home in Pennsylvania’s Poconos Mountains.

On Tuesday morning, defense investigators were seen combing through the crime scene.

The order preserving the site had been due to stay in place until February 1 or until a date ordered by the court.

Court staff told DailyMail.com that the preservation order has not been lifted, although the terms of the order do not prohibit investigators from removing items so long as the defense is also able to get access to them.

Kohberger arrived back in Moscow on Wednesday night after an arduous 12-hour journey in a Pilatus PC-12 turboprop plane.

The 28-year-old was booked into the Latah County Jail ahead of a court appearance on Thursday morning which saw him sit impassive as the charges – four counts of first degree murder and one of burglary – were read out.

Shortly before the hearing, authorities in Latah County released an affidavit that revealed fresh details about the investigation – including that Kohberger visited the area around the rental home 12 times in the months before Kaylee Goncalves and Madison Mogen, 21, and Xana Kernodle and Ethan Chapin, 20, were murdered.

Court papers also revealed that while authorities are yet to locate the murder weapon, Kohberger’s DNA was found on a brown leather sheath for a Ka-Bar knife left next to the bodies Madison and Kaylee who died next to each other in Madison’s single bed on the third floor.

The affidavit also notes that Ethan and Xana were found in a bedroom on the second level, with Xana discovered slumped over on the floor. 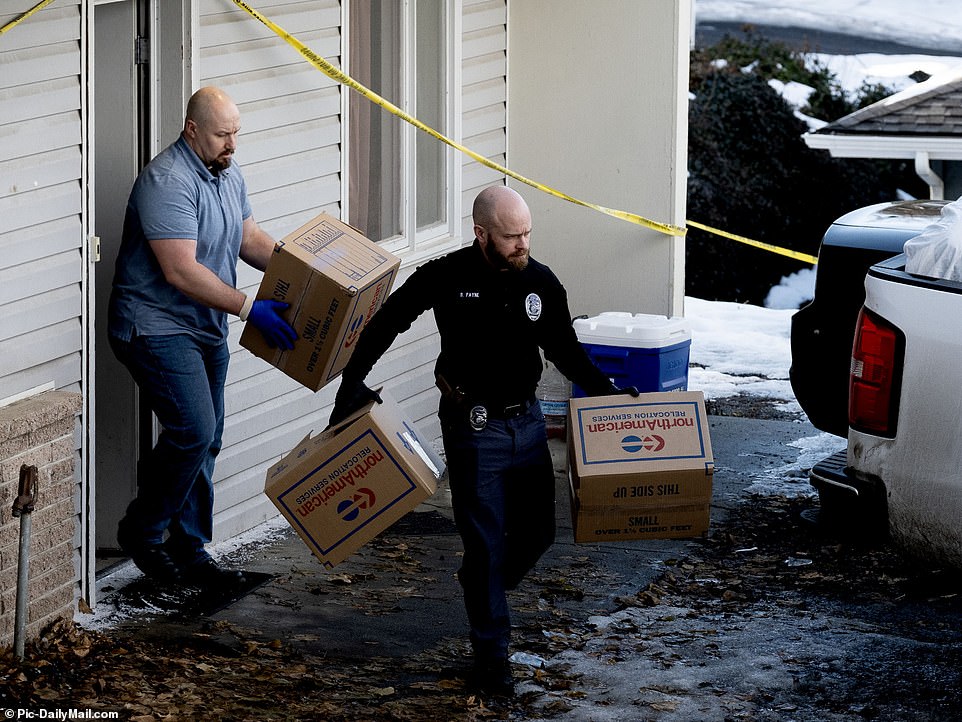 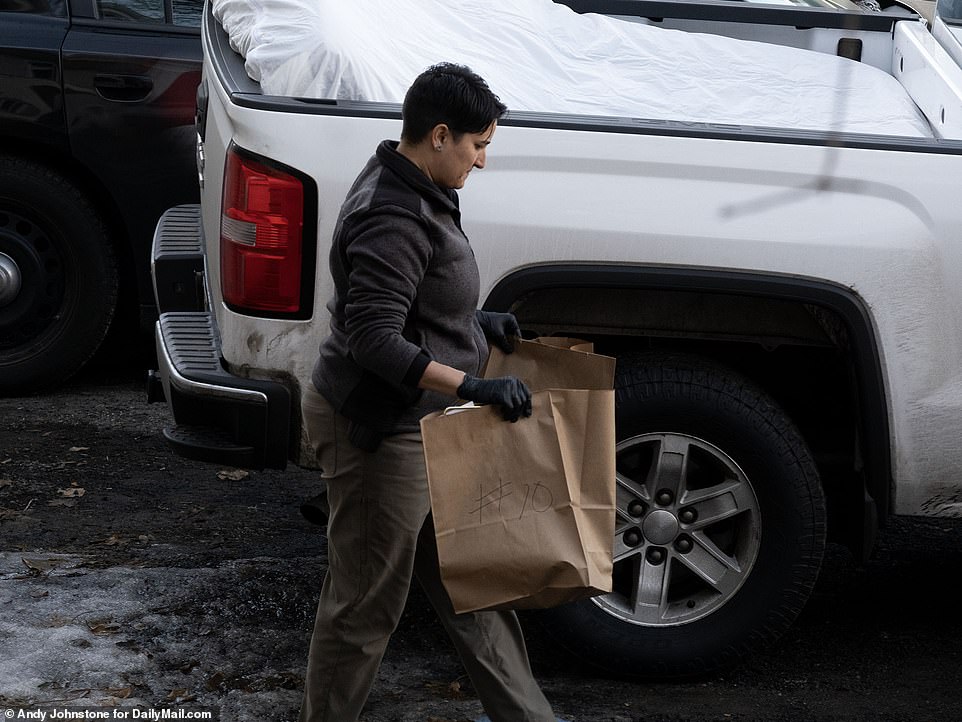 Numbered bags are seen being removed from the home on Friday afternoon in Moscow, Idaho 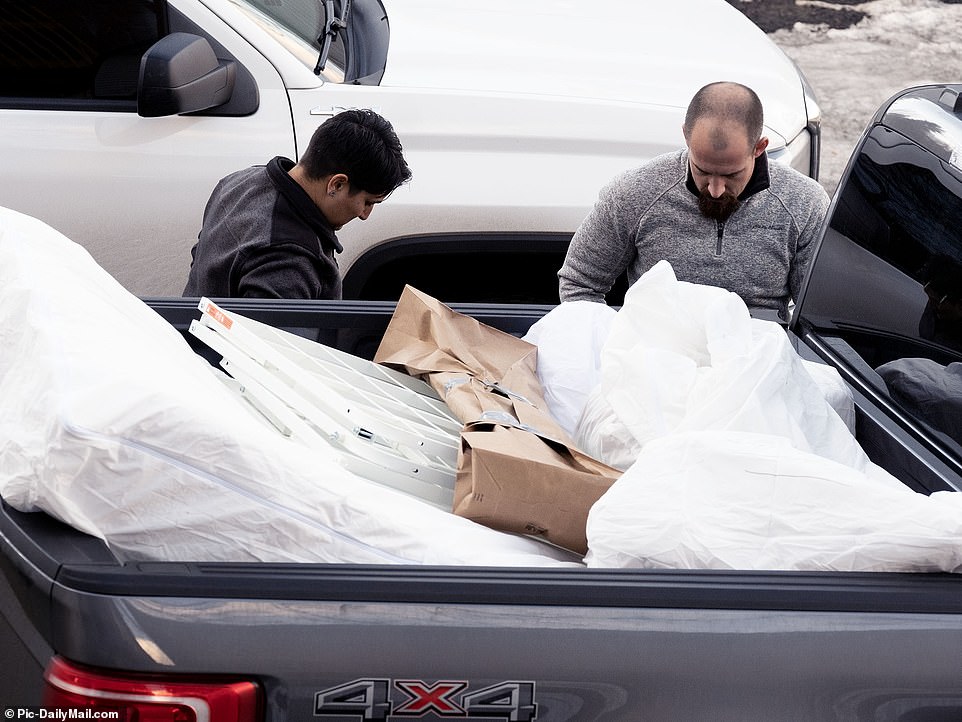 Police records show she had ordered a final meal from fast food chain Jack in the Box minutes before she died, with the DoorDash delivery arriving just before 4am.

According to the document, surviving roommates Dylan Mortensen and Bethany Funke did hear something of what happened, with Mortensen telling cops she heard Goncalves say ‘there’s someone here’ at approximately 4am.

Ten minutes later, she heard a thud and crying from Xana’s room and a male voice saying: ‘It’s ok, I’m going to help you’.

At 4.17am, a dog was captured barking loudly on a neighbor’s security camera. Around the same time, Mortensen said she opened her bedroom door again and saw a tall male with bushy eyebrows leaving through the sliding glass doors at the back of the home.

She described how she had been ‘frozen in shock’ as the black-clad male walked towards her and said she locked herself in her room after he left. 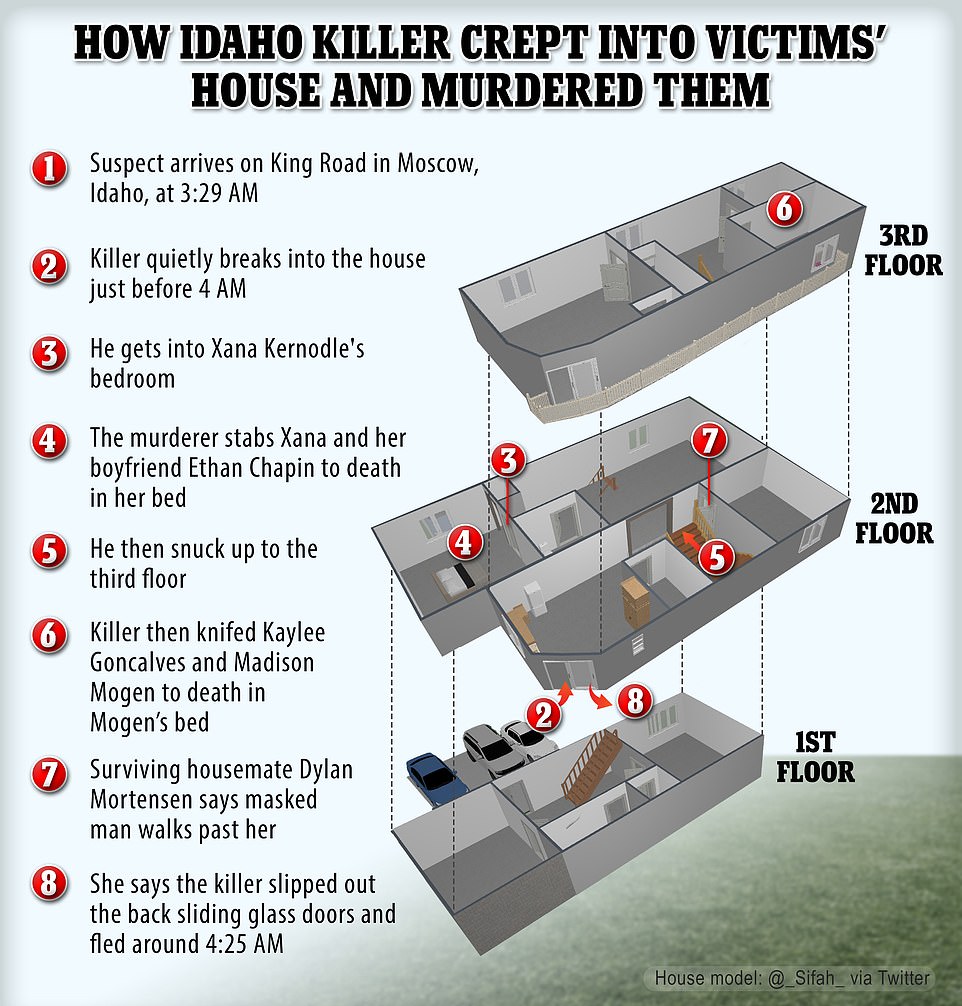 A shoe print was later found outside her door.

The affidavit also reveals that Kohberger’s white Hyundai Elantra was captured on camera repeatedly near the scene before being seen driving rapidly away from the home towards Pullman at approximately 4.20am.

Police rapidly connected the vehicle to Kohberger and noted the similarity between his appearance and Mortensen’s description of the intruder at the rental home.

Kohberger has insisted he had nothing to do with the savage knife slayings of students Madison, Kaylee, Xana and Ethan, and is expected to plead not guilty.

The 28-year-old had previously told his lawyers in Pennsylvania he was ‘surprised’ to have been arrested and said he is ‘looking forward to being exonerated’ when the case goes to trial.

Court documents show Kohberger, 28, and his attorney, Anne Taylor, asked for the 1122 King Road property to remain sealed until February 1.

An Idaho judge ordered the home will remain locked and surrounded by crime scene tape, but officers do not have to monitor it on site.

Documents show Taylor asked for the scene to be preserved on December 30 – just hours after a SWAT team swooped on Kohberger’s family home in Pennsylvania. 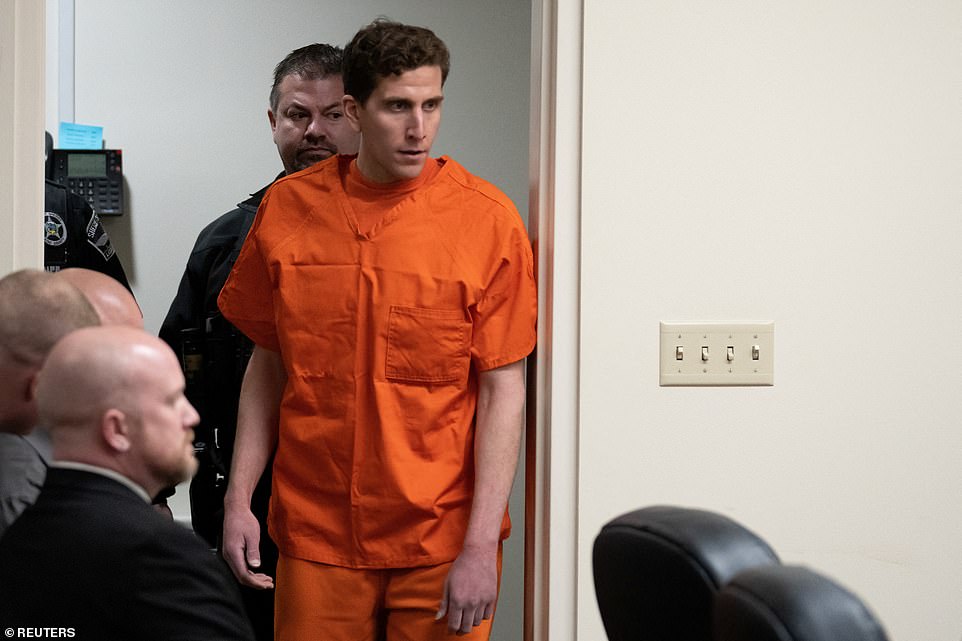 Kohberger has insisted he had nothing to do with the savage knife slayings of students Madison, Kaylee, Xana and Ethan, and is expected to plead not guilty 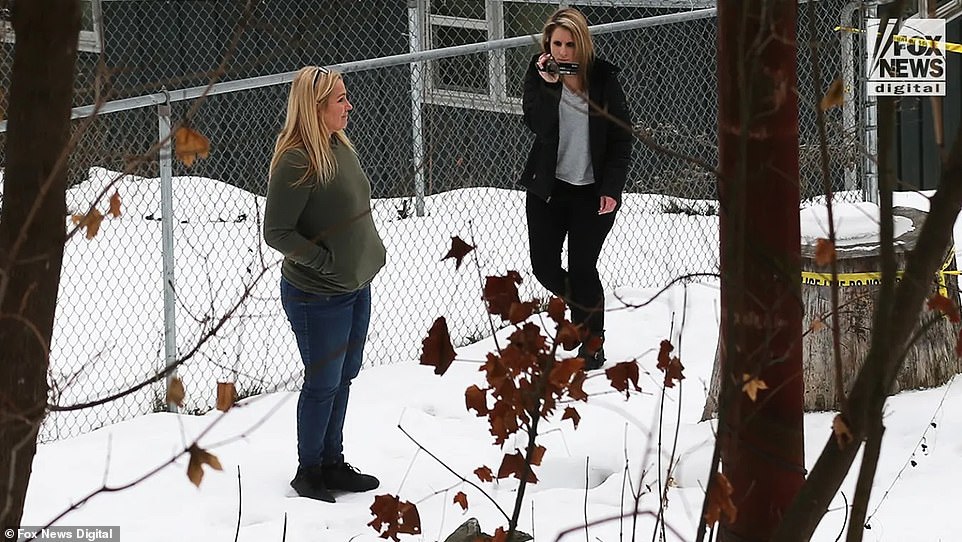 The order requested Kohberger and his defense team be notified if any evidence has been, or is set to be, destroyed and allows them to take a view of the scene.

It meant a plan set in motion by Idaho police to clean up the property was called off at the last minute.

Cleaning professionals from Disaster Response arrived at the three-story property in Moscow, Idaho, and had barely started the clean-up when they had to pack up.

The cleaning crew was seen placing a tarp around one of the doors so items removed from the property could not be seen.

Chief of Moscow Police James Fry previously confirmed at a press conference the plan was called off because of a court order linked to the arrest of Kohberger. 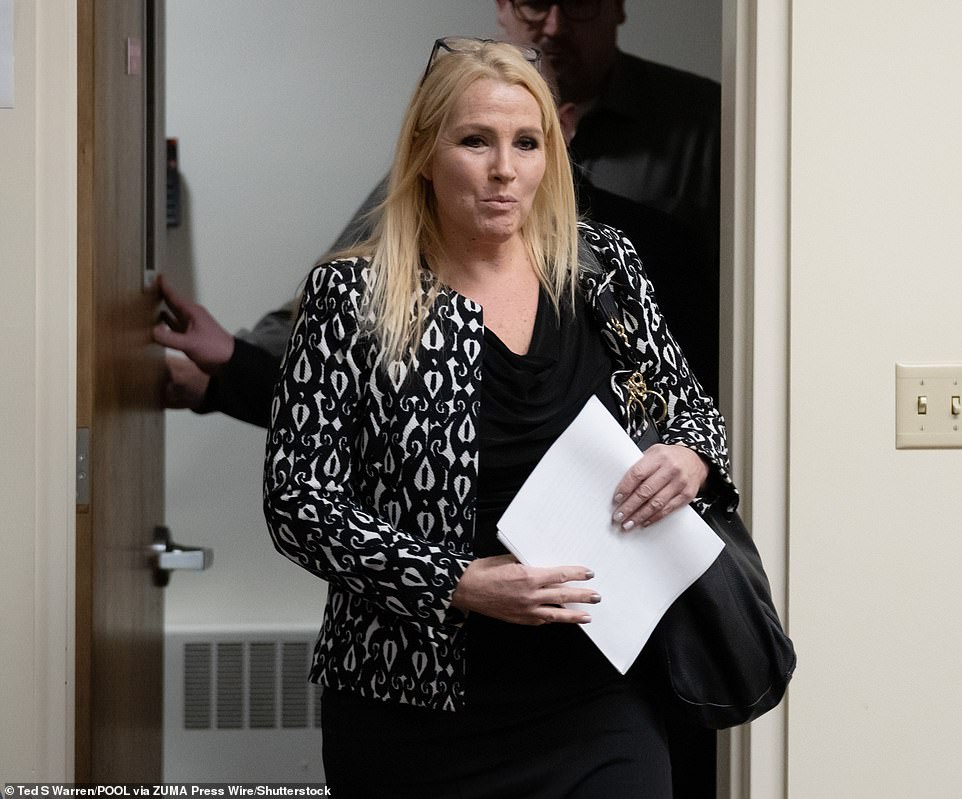 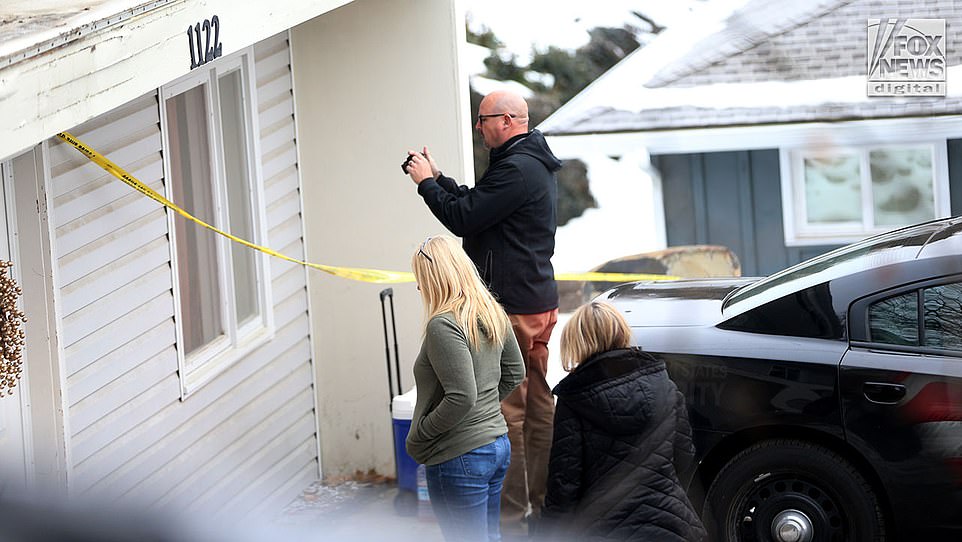 Hours after his extradition hearing investigators hired by Kohberger’s defense team arrived at the property on King Road to take pictures and footage. Pictured is Ann Taylor (centre) 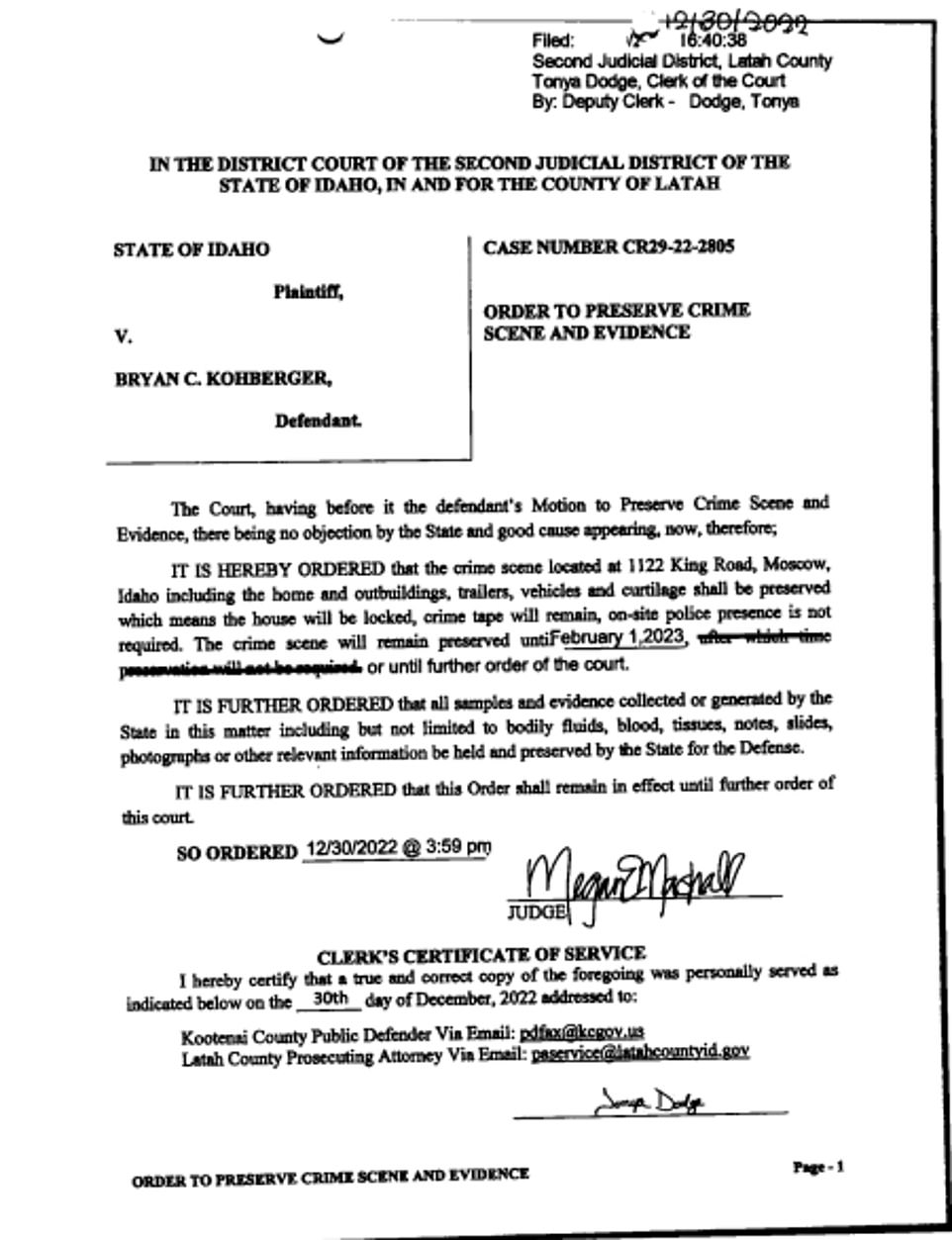 The order requested that Kohberger and his defense team be notified if any evidence has been, or is set to be, destroyed and allows them to take a view of the scene 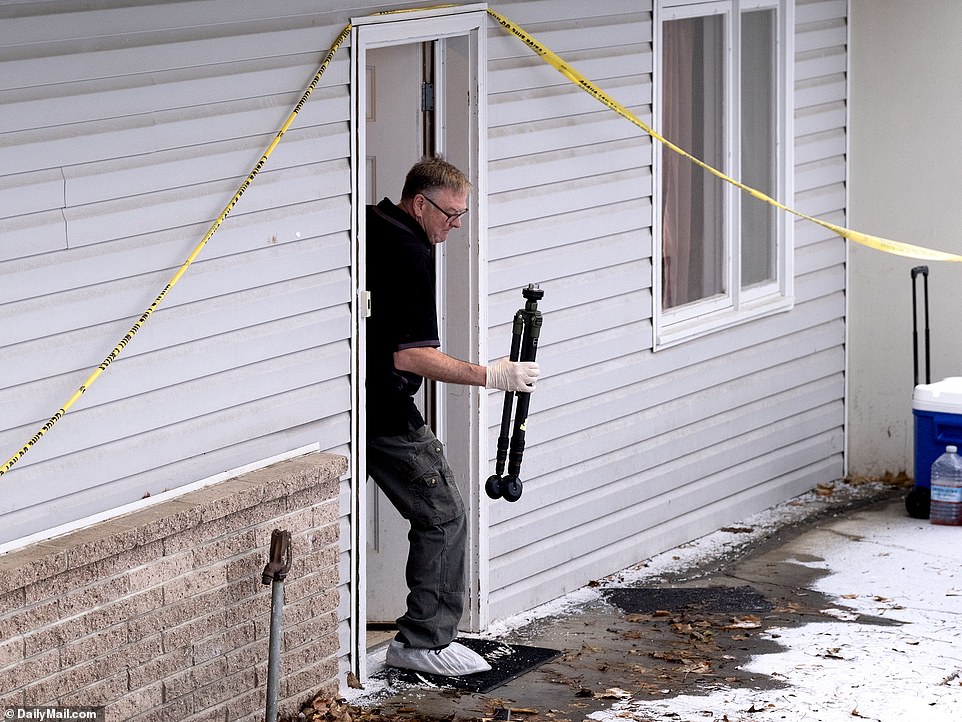 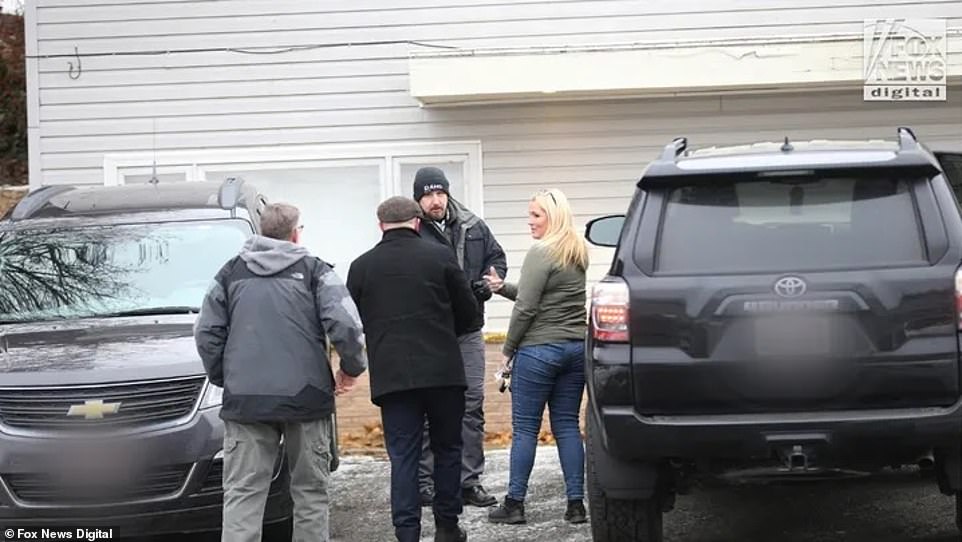 It is unusual for public defenders to create a reconstruction of the scene, but the team spent around 45 minutes taking video footage inside and outside of the property

They reportedly spent around 45 minutes taking video footage inside and outside the property.

Four of the investigators then left the property, but a crime scene reconstruction analyst remained.

It is unusual for defense attorneys paid by the state to create a reconstruction of the crime scene.

Kohberger’s parents have insisted they don’t have the money for a private attorney – but have protested his innocence.

The officers were tasked with tracking Kohberger so they could arrest him as soon as a warrant was issued as well as trying to get hold of an object to compare DNA to a sample found at the scene.

He was also seen cleaning the inside and outside of his car, with the source adding that he didn’t ‘miss an inch’. 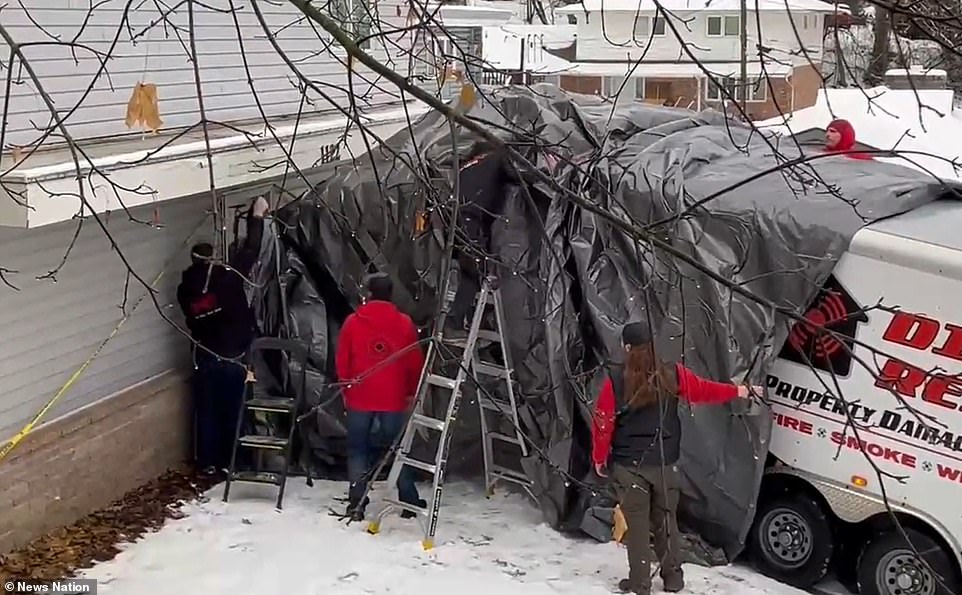 Cleaning professionals from Disaster Response arrived at the three-story property in Moscow, Idaho, a week ago and had barely started attempting the clean-up when they had to pack back up 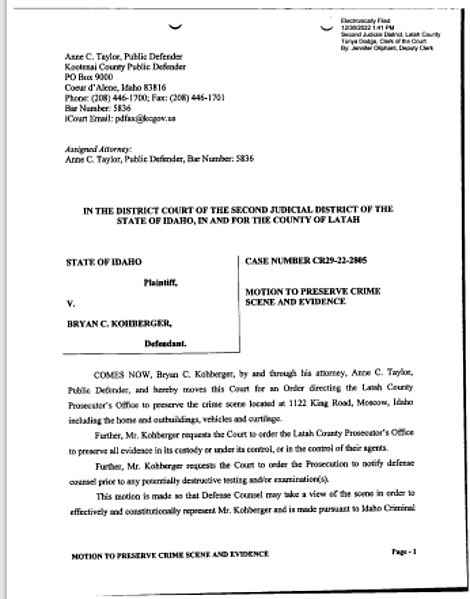 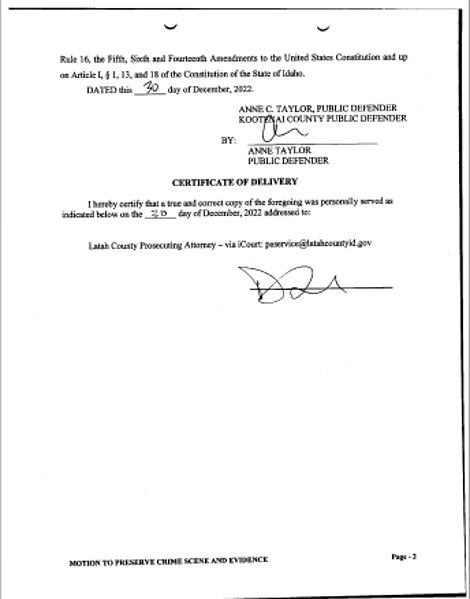 The original cleaning crew was seen placing a tarp around one of the doors so that items removed from the property could not be seen.

Kohberger was also reportedly seen taking out the trash to his neighbour’s bins at around 4am – with the contents being recovered by offices.

matched the DNA found on the sheath to Kohberger’s by comparing it to his father’s DNA – which was a 99.9998 percent match.

The white Hyundai Elantra is one of the things that helped cops track down the alleged killer, as well as obtaining his phone records.

He yesterday appeared in court charged with the four murders as well as a felony burglary after being extradited to Idaho.

Kohberger previously insisted that he would be ‘exonerated’ to his lawyer in Pennsylvania. 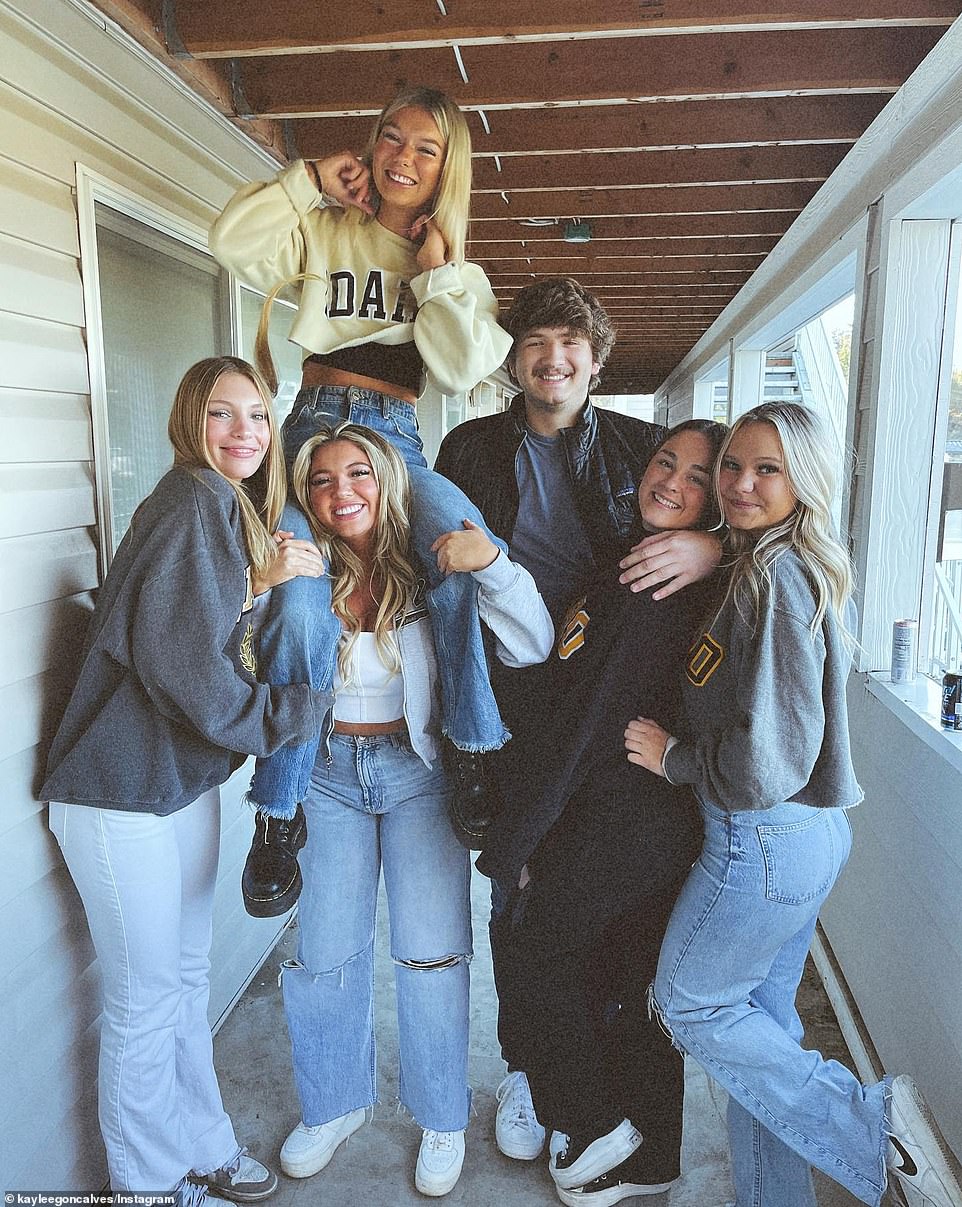 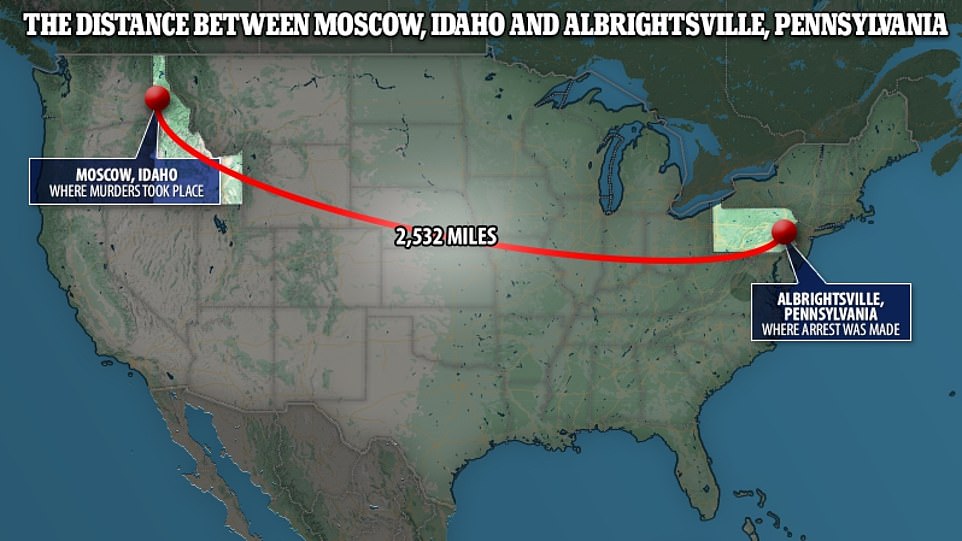 The criminal justice graduate only spoke to confirm his name and that he had representation during a hearing in Moscow, Idaho, on Thursday.

Kaylee Goncalves’ parents have now publicly said that they back the death penalty in the case, as they feel it is the only way to get justice.

The timeline issued by police indicates that Kohberger managed to break into the house and kill al four victims within a 15-minute period, before his car was seen speeding off in surveillance footage.

Phone records show that Kohberger went close to the property just five hours after the murders were committed – with his phone being turned off during the time of the murders.

He is also accused of stalking the students and visiting the property or the area at least 12 times before the slayings on November 13.