I would LOVE to leave Just Stop Oil tied up on the gantries, but it’s ‘too dangerous’ and ‘we’re NOT ALLOWED to’, new Met Police chief Sir Mark Rowley tells MPs

Britain’s most senior police officer has said he would ‘love’ to be able to ignore protestors who bring traffic to a halt by locking themselves to motorway gantries.

Metropolitan Police Commissioner Sir Mark Rowley said he was deeply concerned about the impact on policing in London of having to deal with the disruption caused by the recent Just Stop Oil protests.

However, giving evidence to the Commons Home Affairs Committee, Sir Mark said the Highways Agency, now known as National Highways, had advised police that protestors who locked themselves on gantries over the M25 represented a safety hazard to motorists and should be removed before the road was reopened.

Asked why they could not just leave them there and allow the traffic to continue, Sir Mark said: ‘I am completely up for that. 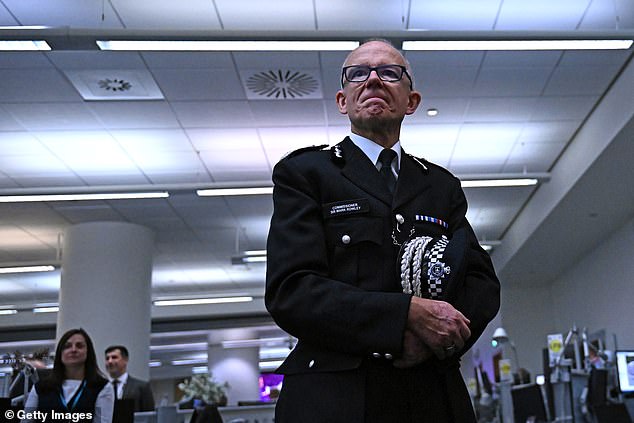 ‘The Highways Agency feel there is a safety risk. They are concerned, I think, probably more about drivers being distracted than they are about the individuals.

‘I would love to ignore all these characters but it is not always possible.’

Sir Mark confirmed that 12,000 officers had been involved in policing the Just Stop Oil protests in the course of October and November.

‘It is deeply concerning to me that that 12,000 officer shifts that weren’t policing London’s communities because they were dealing with protestors in the centre of London or on the M25 or wherever,’ he said.

Traffic on the M25 was brought to a halt on several occasions while other routes were also closed by protestors gluing themselves to the road.

Sir Mark said the law was currently unclear when it came to the action police could take to deal with disruptive protests.

‘The balance between what is lawful and reasonable and what is not is very, very unclear,’ he said.

Yesterday, it was revealed cancer patients heading to appointments and hospital staff were among those affected after Just Stop Oil activists blocked four lanes of traffic in Finsbury Park and Holloway Road.

Some members grew increasingly frustrated as the blockade dragged on for 90 minutes, The Daily Telegraph reports.

NHS mental health specialist Dr Rebecca Long said: ‘It’s strike day so this protest is having little impact. I support climate change causes and I’m vegan but they are not helping the cause… I’ve got patients waiting to see me.’ 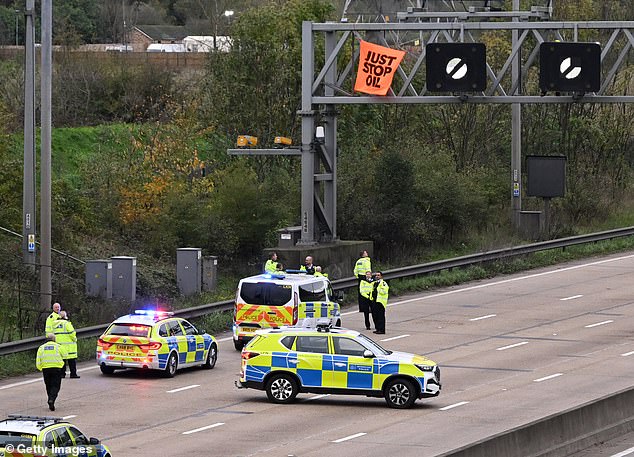 In his evidence, Sir Mark added: ‘Parliament has left a very grey space about was is lawful and what is unreasonable disruption and are expecting police to work out a line in the middle of it.

He said the police had become much quicker in removing protestors but their legal advice was that they should not physically tear off protestors who glue their hands to road, which he said police in France do.

‘Our advice is that we need to use solvent removers for the glue on the basis that reduces the harm done to (protesters). I’ll always go and reflect on it,’ he said.

‘The law is about using minimal force. If there is a way within a few minutes to remove somebody without causing significant harm to their hands then we are expected to do that.’ 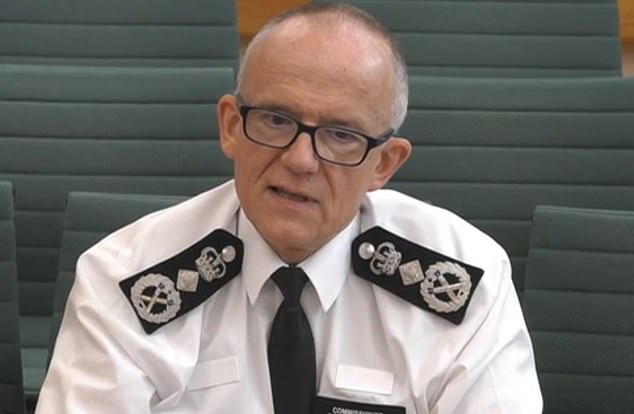 Earlier yesterday, it was revealed the Metropolitan Police is harbouring ‘hundreds’ of racists, misogynists and convicted criminals who cannot be fired due to weak misconduct procedures, its new commissioner admitted yesterday.

Sir Mark Rowley complained he was unable to purge the force of its ‘toxic minority’ of ‘corrupt’ officers because of rules that force him to defer decisions about sackings to independent panels.

‘I’ve got tens of thousands of great people and hundreds of people who shouldn’t be with me,’ he told the Home Affairs Select Committee.

‘We have police officers who have gained serious criminal convictions whilst being police officers that we can’t sack. We’re having to put restrictions on them to reduce the damage they can do as leaders or in terms of serving the public.

‘The final word for removing a police officer doesn’t sit with me. It sits with independent tribunals who I’d say don’t have the same interest in the quality of policing in London as I do.’

Sir Mark said Home Secretary Suella Braverman was ‘open’ to the idea of giving him the power to fire officers himself.

He told MPs: ‘You are holding me to account vigorously for the quality of policing in London, which is reasonable. But it seems unfair that you do that and I don’t have these leaders and I have officers I can’t remove.

‘If I was head of John Lewis I’d be able to decide who my team were, while as Commissioner of the Met I don’t have quite the final say in it – that seems odd.

‘It seems the Home Secretary is persuaded by the principle of the argument and is looking at whether any fast changes to regulations can be made.’

Sir Mark’s predecessor Dame Cressida Dick was forced to resign earlier this year after a raft of scandals, including the revelation of racist, misogynist and homophobic messages that were shared by officers at Charing Cross police station.

Other disturbing cases included the rape and murder of Sarah Everard by serving officer Wayne Couzens, the strip search of Team GB sprinter Bianca Williams and the sacking of two officers for sharing pictures of the bodies of murder victims Nicole Smallman and Bibaa Henry.

Sir Mark, who retired as the Met’s head of anti-terror operations in 2018 before returning as commissioner this year, said the force was ‘definitely’ in a worse state than when he left it.

He said senior officers had failed to act ‘vigorously’ enough against corrupt and incompetent officers, with just 40 to 50 sackings each year on average.

‘It should be hundreds,’ he said, before suggesting that the people who were ‘getting off lightly’ were ‘largely white men behaving badly to black and female colleagues’. 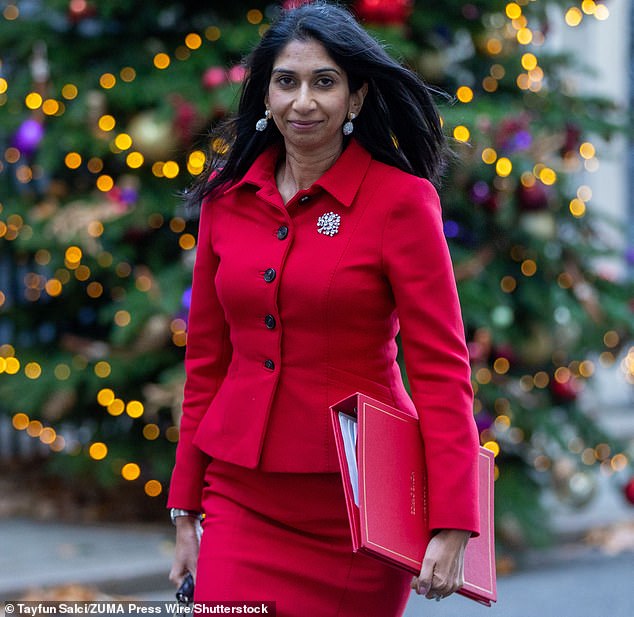 The Met chief said cracking down on these protests was difficult due to MPs leaving ‘grey areas’ in the legislation.

‘The 1986 Public Order Act creates some thresholds for police intervention around the phrase serious interruption to the life of a community – that has never been defined,’ he said.

‘That’s further complicated by the Human Rights Act which creates principles around rights including freedom of speech. So every time police intervene they have to balance all those.’

Asked about the criticism officers have faced for taking too long to remove protesters blocking roads, he said: ‘Legally we can’t interpret the offence of highway obstruction alone, we have to balance it with the Human Rights Act.

‘And the case law says some highway disruption is perfectly legal when it comes to protest.’ 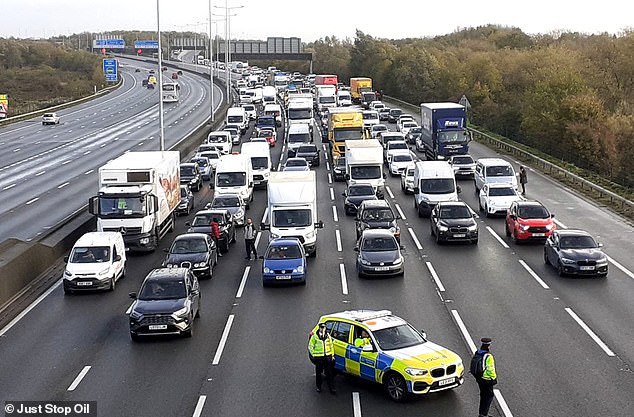 Sir Mark revealed he would support a policy of simply leaving Just Stop Oil protesters chained to motorway gantries and allowing traffic to continue flowing. Pictured: An incident on the M25 earlier this month

He added National Highways advised it was unsafe to leave protesters tied to gantries. He said: ‘I can understand that, because they’re concerned more about drivers being distracted than the individuals. And they have more knowledge about that.

‘I would love to ignore all these characters but it’s not always possible.’

Asked why young black men were being disproportionately affected by the policy, he said: ‘Sadly, young black men in London are twelve times more likely to be murdered than young white men – and those are figures from the last decade,’ he said.

‘So our efforts to protect those young men mean we are going to put more stop and search in areas with high crime.

‘That isn’t an excuse though for not working with communities in a way that builds trust – clearly we’re not doing that at the moment.’

He also revealed that more than 10 per cent of police officers cannot currently be deployed on the front line due to sickness or misconduct investigations.

‘That number concerns me because it affects the quality of policing for Londoners,’ he said.

‘Some of that you wouldn’t want to change – such as officers who are disabled after being injured on duty – but a lot of them are people in the middle of misconduct processes or with checkered sickness records.’