The Duke of Sussex has widened his net. As part of the process of peppering his family with what he imagines are the lethal weapons of his self-pity and rampant indiscretion, Prince Harry has moved from attacking his father, the King, and his brother, the Prince of Wales, to sharing what ought to have remained his private feelings about the Queen Consort.

Having first of all labelled her a potential “wicked stepmother” who was scheming to get “the Crown” in an interview with Tom Bradby on ITV, in an American one on Sunday he went even further. He accused Camilla of having “sacrificed” him “on her personal PR altar” and added that “she was the villain, she was a third person in the [King’s] marriage [to Diana, Princess of Wales]” . 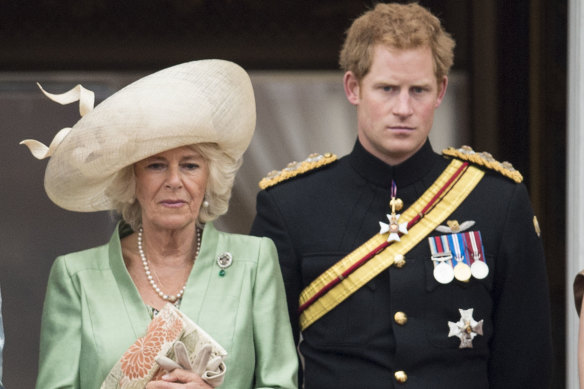 Harry has turned his attention to stepmother Camilla Parker-Bowles in his latest attacks on the royal family.Credit:Getty Images

This astonishing assault on his father’s wife raises two questions: will the King ever forgive him; and will these accusations damage the reputation the Queen has assiduously built up in nearly 18 years of marriage and public duties? The King was said by his friends to be ready to forgive his youngest son’s transgressions. But, no one would be surprised if His Majesty’s sympathies were now irrevocably strained by this smearing of his wife.

In the interview with 60 minutes, a US show on CBS, Harry further accused his stepmother of needing “to rehabilitate her image”, which made her “dangerous because of connections she was forging within the British press”. These supposed connections, he continued with his now customary lack of understatement, led to “an open willingness on both sides to trade information… there was [sic] going to be people or bodies left in the street because of that.”

This couldn’t be further from the woman that I have met over the years. She is an utterly straightforward and honest person. The Duke seems oblivious to the fact that his stepmother now occupies a higher place in the public’s regard than he does – thanks not just to her own public service, but also to his own ill-judged behaviour. He cannot see that most of his father’s subjects will regard his disloyalty towards his family – even to his stepmother – as an act of delinquency, and as unforgivable. Despite the Queen’s absence from what he describes as the troubled early years of his life, she now finds herself dragged into her stepson’s orgy of exhibitionism.

In his ghostwritten book, the Duke also implies that Camilla Parker Bowles – as Her Majesty then was – deliberately leaked details of her first meeting with Prince William. He accuses her by insinuation; the meeting comprised solely the Prince and his future stepmother, and when news of it eventually seeped into the press it must, he thought, have been “the only other person present” who had leaked it.

This allegation was repeated in Harry’s British television interview, even though it had been confirmed beforehand that the information was not deliberately leaked. Amanda MacManus, Mrs Parker Bowles’s devoted private secretary, inadvertently mentioned details of the conversation to her journalist husband; and one of his colleagues extracted the information and promptly leaked it.

Mrs MacManus, who is of the highest integrity, resigned when her part in the events became obvious to her. She said, “I am very sorry to be leaving, but, as the person responsible for this unhappy chain of events, I cannot with honour remain in this position.” Such is Queen Camilla’s deep confidence in her that she was re-hired, and remains a key confidante of Her Majesty.

The Duke seeks to suggest that Mrs Parker Bowles deliberately spilled the intimate details of her conversation with Prince William to Fleet Street, which is simply untrue. If he can get that wrong – and Mrs MacManus insists the responsibility was hers – then one wonders how much else in the book is real, as opposed to imagined.

The Duke might also learn something from Mrs MacManus’s impeccable behaviour: he appears incapable of accepting responsibility for anything in chronicling a clearly unhappy life in which every drop of misery has, it seems, been somebody else’s fault. He might start by putting out a statement to acknowledge that the slur he has, by implication, cast on the Queen’s reputation was wrong, apologising for the mistake and the insult.

The Duke says that he and his elder brother – who, having escaped re-programming in American-style therapy, seems to be refreshingly normal by comparison – had agreed to welcome Mrs Parker Bowles into the family provided his father did not marry her.

How she could formally join the family without marrying into it is not explained but, again, perhaps they think of these things differently in America.

Indeed, Harry goes so far as to say that he and his brother “begged” the then Prince of Wales not to marry Mrs Parker Bowles, in the Duke’s case partly out of fear that she would become a “wicked stepmother”. It could not be more appropriate that this grown man resorts to the language of fairy tales, because that appears to be how he sees his existence. Indeed, what we know of the book suggests that a fairy tale might well be the best way of describing it. Its author, judging from his behaviour, is certainly away with the fairies.

To be fair to both the King’s sons, it must have been profoundly distressing to be the product not just of a broken home, but of a home broken up more publicly than any in British history since Henry VIII’s, with its fragments exposed not just to Britain but to a morbidly fascinated world.

And, human nature being what it is, it cannot have been easy to be asked to accept as their father’s inamorata, and later as his wife and their stepmother, a woman they and many Britons held responsible for breaking up the King’s first marriage. 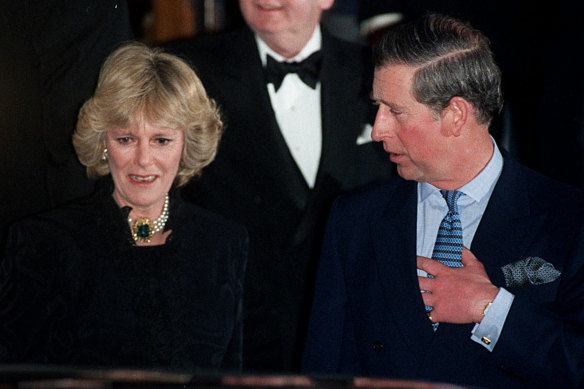 Parker-Bowles and Charles in 1999. Harry says that he and his brother “begged” their father not to marry her.Credit:AP

Yet things did not turn out so badly: meeting Mrs Parker Bowles, according to the Duke’s book, was like, “an injection. Close your eyes and you won’t even feel it”. One can only conclude that he means she was not, after all, so ghastly as he had imagined, and he and his brother came round to her in the end.

However, before that happy stage was reached, matters seemed to become ludicrous. As if he and his family were in an episode of the TV drama The Tudors, the Duke writes that “shortly after our private meetings with her, she began to develop her long-term strategy, a campaign directed at marriage and, with time, the Crown (with the blessing of our father, we supposed).”

One is struck by his use of the word “Crown”. Perhaps in his ignorance (of which there is abundant evidence) he means his stepmother had determined to become Queen Consort by whatever means, and would thus have the right to be crowned at the Coronation and to wear the consort’s crown on state occasions, such as the State Opening of Parliament.

But the term “the Crown” is to most people a synonym for the institution of monarchy, so one might think the Duke was under the impression his stepmother intended to make herself head of state and thus control the institution. He may even be stupid enough to believe that.

The King would be justified if he disdained his son’s complaints about media attacks on the Duchess of Sussex. The Queen Consort put up with a far worse media assault for more than 20 years, from long before the death of Diana, Princess of Wales until long after the then Mrs Parker Bowles became Duchess of Cornwall. She, and her husband, reacted to the media’s abuse by not reacting at all: they stuck constantly to the policy of “never apologise, never explain”, and just got on with their lives and their public duties.

This strategy eventually brought an end to the unfair attacks: partly because the novelty wore off and the media became bored with persecuting the royal couple, but also because, through her example of uncomplaining and energetic public service, the Duchess of Cornwall won, first of all, respect, and then admiration for her sense of duty and her character.

Just as the Duke of Sussex says that he and his brother came to accept her, so did the British public; and, of course, it was the express wish of the late Queen that her daughter-in-law should, in recognition of her contribution to the country, have the rank and style of Queen Consort when her son became King. That accolade more than counters any of the halfwittery and fantasy history that the Duke expends on his stepmother in his bizarre book.

It is not least for that reason that what we have gathered so far from the Duke’s book about his view of the Queen Consort is unlikely to do her any damage at all: indeed, it is more likely to build further the sympathy and regard the public have developed for her.

Something similar applies to the Duke’s whining about his brother and his father, the dignity of whose lack of response to these puerile torrents of unpleasantness serves as a powerful contrast to the Duke’s embarrassing emotional incontinence. They, at least, are behaving in the discreet and civilised way that allows the British public to respect and support their Royal family.

It is always dangerous to assume what the motives of others might be – a point the Duke would do well to learn – but if he was setting out not just to make money, but to damage the King, Queen and the Prince of Wales, he has almost certainly failed.

His weapons of self-pity, disloyalty and indiscretion may indeed prove lethal. However, he is the chief and (with the possible exception of his wife) perhaps the only long-term casualty.