Senior nurses and doctors say conditions in Melbourne’s hospitals are the worst they have seen and standards of care are slipping as understaffed hospitals try to cope with record COVID-19 admissions. 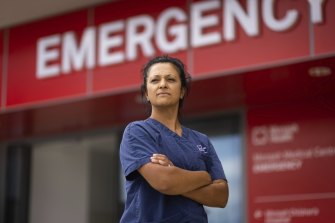 Advanced medical and nursing students, physiotherapists and others have been recruited to assist on wards, quarantine hotels will be used to accommodate patients and many more people are being managed at home as part of the strategy to maintain key hospital services in Victoria.

The Sunday Age spoke to eight nurses and doctors at Victorian hospitals this week who detailed the harrowing impacts of the intense demands on the hospital system, worsened in recent weeks by mass furloughing of staff as the Omicron variant spread across the country.

There was an unverified report that at least one patient who may have survived if they had been placed on a ventilator at the end of last year was instead taken to palliative care because of a lack of staffed intensive-care beds.

Other nurses, who requested anonymity because they were not authorised to speak publicly, said some cancer patients’ chemotherapy sessions had been delayed for up to 48 hours, other patients were left without a shower for several days, and one elderly man who fell in his room was not tended to for 45 minutes because of staffing shortages.

Monash Health nursing co-ordinator Mel Hyde said in 15 years in nursing this was the worst she had known it to be for the Victorian healthcare system.

“We are in such a crisis now,” she said. “I don’t think people understand how horrific it is.”

In the past week, The Age has revealed that the state’s triple-zero system is again in crisis, with many calls taking five to 10 minutes to be answered, while surf lifesavers and other volunteers are filling hundreds of paramedic shifts every week.

Minimum nursing ratios are not always being met and most elective surgery procedures were again cancelled last week.

On Saturday, the number of COVID-19 hospitalisations in Victoria surpassed 1000 for the first time in the pandemic. A day earlier, staff at one Melbourne hospital were told this could still increase three or fourfold before the worst of the Omicron wave was over, according to leaked correspondence.

While the Victorian government says it has no recent modelling on anticipated hospitalisations, the head of the epidemiological modelling unit at Monash University, James Trauer, anticipated Victoria could have 3000 COVID-19 patients in hospital in the coming weeks based on what had occurred in the UK.

According to an earlier Health Department plan, that rate of admissions could prompt more extreme measures, including reduced access to emergency care and a scenario where hospitals only treated the sickest COVID-19 patients.

The deputy state controller of health system operations, Adam Horsburgh, said the Health Department had planned for every scenario, but those measures would only be considered in the worst case.

“We are doing everything we can to mitigate or reduce the need for us to take that [step],” said Mr Horsburgh. “I’m very conscious that this is a balance between providing access to those with COVID who need care and providing a whole range of non-COVID services that the community needs access to as well.”

In a worst-case scenario, he said it was possible that pressure on the hospital system would eventually reach the point that pausing some category 1 elective surgeries would be considered.

If that happened, he said, senior surgeons at each hospital would assess patients to establish “who is truly most clinically urgent” and that the intention would be to keep the pause in place for the shortest time possible. He said expert medical groups were in place to be consulted for any other difficult decisions needed.

In the meantime, Mr Horsburgh said efforts to take strain off the hospital system were now focused on supporting COVID-19 patients to stay at home, including through expanded hospital-in-the-home programs, and in quarantine hotels, including for those who are close to discharge but needed clinical observations or physiotherapy.

Staff working under supervision are also increasingly being brought in to assist nurses, including physiotherapists and occupational therapists on wards along with medical or nursing students nearing the end of their training taking on roles such as being “PPE spotters” to check people are wearing masks and other equipment properly, he said.

Allowing asymptomatic health staff with COVID-19 to return to work is considered a worst-case scenario, along with declaring a code brown emergency for the hospital system – a measure that was typically reserved for shorter-term emergencies like a train crash or bushfire.

Instead, he said it would be wise for the elderly or people with conditions that made them vulnerable to illness to have as little contact as possible with those outside their home until the peak had passed.

“If you’re an elderly person, the last thing you want to be doing is turning up at a hospital in the next couple of weeks,” he said.

“It’s like a last-ditch thing … and there could be a role of government as they could deliver essential supplies to the doorstep of elderly people so they can just stay within their houses.”

At Monash Health in recent weeks, Ms Hyde has been asking nursing staff to work double shifts and stay back late due to the number of workers being infected or isolating.

The hospital’s emergency department was 10 staff short during night shift one night last week – half the workforce for night duty, she said. Ambulances were ramped outside hospitals for up to eight hours waiting to offload patients.

Overstretched nurses were devastated by the necessary shortcuts taken to deal with the load and constantly worried about their quality of care, she said.

“For the nurses, they always worry: ‘Have I missed something? I feel like I’ve left an incomplete shift. I’m handing over a mess. I wasn’t able to change that pad’.”

Ms Hyde said every COVID-19 wave has felt the hardest, with Delta presenting seriously ill cases and straining intensive care units. But the sheer number of people coming into hospital during the Omicron outbreak, coupled with lack of staff, had set a new precedent.

Emergency physician Simon Judkins said patients were being treated in waiting rooms of emergency departments, in some cases for 12 hours, while other healthcare workers said this was occurring in triage tents set up outside hospitals.

“I can’t remember any time working in the public health system for the last 30 years that we have felt this much pressure and this much stretching of resources and compromising of care,” Dr Judkins said. “We’re not able to maintain any level of the patient’s respect or just humanity.”

A cancer patient in their 70s who may have survived if they were placed onto a ventilator machine following surgery in December, was instead taken to palliative care due to unavailability of staffed intensive care beds, according to a senior nurse who requested anonymity as they were not authorised to speak to the media.

A separate nurse at a major Melbourne hospital confirmed this was not an isolated case.

“Our job is to help and heal people and it’s really hard when we can’t do that to the best of our ability,” said one of the nurses, who requested anonymity as they were not authorised to speak to the media.

Meanwhile, a senior specialist doctor in Melbourne, also not authorised to speak publicly, said he had been told in a meeting this month to avoid “soft” hospital admissions – a direction he understood to mean not to admit people who might be considered borderline.

He said junior doctors had also told him they’d been advised to “minimise investigations” of patients to speed up their discharge from hospitals.

“The most precious resource, the staff, is depleted and burnt out and suffering from moral injury from witnessing things they weren’t expecting and not being able to provide the best care. That’s the problem.”