In all, 8.3 per cent of year 12 students completed an unscored VCE in 2020, data given to The Age by the Victorian Curriculum and Assessment Authority reveals. 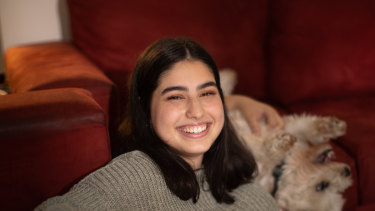 Maya Pradhan completed her VCE without a study score last year and has enrolled in an arts degree at Swinburne University.Credit:Simon Schluter

It is a modest increase on 2019’s total, when 3810 students went unscored, suggesting the disruption to study caused by the pandemic did not generate a surge in students choosing this option for fear of getting a low ATAR.

There were calls to ditch the ATAR last year, including a prominent online petition signed by 25,000 people calling for all senior exams to be scrapped due to the pandemic.

The option of completing VCE without a study score has existed since the certificate’s inception, but until recent years was only taken up by a fraction of students.

Templestowe College, in Melboune’s east, pioneered the pursuit of an unscored VCE and in so doing reversed its fortunes from a failing school to one that is a beacon for students who do not want to follow a typical academic pathway.

Between 20 and 25 per cent of its senior students choose the unscored VCE every year, principal Peter Ellis said, mostly because they do not need an ATAR to follow the career or study path they want.

Disruption to schooling in 2020 did not spark a shift towards undertaking an unscored VCE at the college.

Rather than change their plans, students who returned to the college after months of remote learning were steadfast about sticking with their original pathways.

“When we spoke with students when they came back about unscored as an option, they felt they wanted to carry on with their own scored pathway; this is something they’d planned for a long time,” Mr Ellis said.

Maya Pradhan graduated from Templestowe College last year without an ATAR, but has already enrolled in a Bachelor of Arts at Swinburne University.

Ms Padhan, 19, completed an alternative entry program that required her to successfully complete two foundation units at Swinburne and achieve a study score of at least 25 in English.

Other than English, Ms Pradhan did not obtain a study score in any VCE unit, mainly because exams create anxiety and taint her love of learning.

“I really enjoy learning and I thrived in the early years of school, but I would hear that once you get to VCE it’s very intense and you have to crack down to get good scores in everything, and it made me uncomfortable,” she said.

“I didn’t want to go that way; I really value learning but I don’t value exams.”

“It was a big step up compared to VCE,” she said.

The ATAR is a ranking between zero and 99.95 of a student’s results in relation to other students, and is the standard entry route into university.

A spokesperson for the Victorian Curriculum and Assessment Authority said doing VCE without study scores was a valid alternative for some students, including those who do not require a score for tertiary admission, and have chosen alternative pathways such as TAFE, or to take up offers of employment.

“Other students may choose not to undertake assessment when their circumstances make it difficult to complete a scored VCE program, such as illness or disability,” the spokesperson said.

Students who take the vocational VCE alternative, the Victorian Certificate of Applied Learning, also do not get an ATAR ranking. From 2023, the VCE and VCAL will begin to be merged into one integrated high school certificate, doing away with the need for students to choose one or the other.