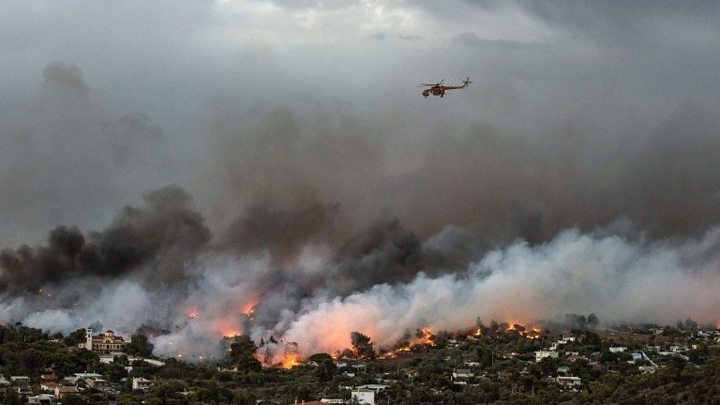 Greek residents describe their terror and heartache as friends and loved ones are killed in wildfires around Athens.

Flames fanned by strong winds have devastated the Attica region killing at least 60 people and injuring hundreds of others.

Rescuers found the bodies of 26 adults and children, who had apparently hugged each other as they died, while many more people are still missing.

‘Branches and debris were hitting the car’

Giannis Labropoulos was driving from Patras to Athens.

“We could not see more than 20m [65ft] ahead but all of a sudden we could feel the heat and see the fire. I just thought this cannot be happening,” he told the BBC.

“We were pretty scared. We didn’t know if we would make it through, we just did not know what to expect.

“Branches and debris were hitting the car.

“The power of the fire and the intense heat made it something we would not want to experience ever again.”

“I could see a new fire had begun in the mountain above where we live – so I called my mother to let her know.

“Within five minutes of this call, the fire had spread everywhere – the whole area of Mati was on fire.

“Whilst I was on the phone, my mother said she couldn’t breathe because of the smoke – so another grandparent came to pick up my babies, as a precaution.

“My mother then called again and said our garden was on fire.

“She and my aunt were screaming that they were going to be burned alive.

“They were afraid to go out through the garden because whole area was on fire.

“Whilst trying to drive back home, I was yelling, ‘My mother is being burned alive, please let me back!’

“But the roads were jammed. Nothing could get in – so I told them to get out of the house and scream for help.

“Out of the blue, a young man whose house was also in flames came by in a car. They got inside and he drove them away.

“I had no battery on my phone after a while and didn’t know if my mother had made it or if my children were safe.

“The several hours of waiting were a living hell. I got to see them the next morning.

“Our beautiful small town is completely destroyed. We find victims every day. Everybody lost their fortune. These were our houses.

“Most of us have no place to go. We don’t have any money to move to another place – we have to start all over again.

“But we are the lucky ones – we are alive and our children are healthy.”

‘A family friend died in the sea’

Olivia Exarchakou, 19, is a student in central Athens. Two of her family friends have died in the fires.

“All day we could see the smoke from the rooftops. We saw it billowing past the Acropolis.

“Yesterday it was very hot and dark because of the smoke.

“There was a lot of wind as well, the winds were so strong cushions and mops were blown from balconies onto the street below.

“A close friend of my mother lost her summer house in the Voutsa area.

“I know two people who have died as a result of the fire.

“One died at home. She didn’t have time to get out of her house because of the speed at which the fire spread.

“Another family friend lost her life at the beach. She was in the water when she was found.”

Catherine Hooper from Bristol travels to Greece regularly and is close to the affected area.

“I am about 20km away on the other side of the Pentelicus mountain range where the fire took hold.

“Even here, the air is acrid. A thick smog hangs over Athens and supermarkets are giving out truck loads of water.

“I have lost count of the number of fire planes and helicopters that have passed and continue to pass overhead, there is a constant drone from planes overhead.

“Yesterday afternoon strong winds meant the fire spread down the mountainside fast. Reports here said roads were jammed and that many people ran to the beach to try and out-run the fire.

“Hundreds went into the sea, but the hot ash and flying debris forced many to swim far out.

“The waves were large and currents pushed people out towards Evia Island.

“This morning I heard that three women and a child drowned. Many more are missing at sea.

“Some swimmers were in the water for four hours before being rescued.

“This morning 26 people were found dead in a taverna. I hear that they have found a mother dead with her child in her arms.

“They have counted 25 people dead on the roads towards the beach.

“I feel sure that as rescue services search the gutted buildings they will find more bodies.”

George Vokos is in Mati. He says he is lucky to be alive after two people died in his arms.

“This is a biblical catastrophe.

“Thank God my family are safe, we ran down to the sea for safety.

“I have lost two cars in the fire as they are burnt out, and my house has been semi-burnt too.”

“But two ladies lost their lives as in my hands.”

Are you in the area? How have you been affected by the wildfires? Email [email protected].

Please include a contact number if you are willing to speak to a BBC journalist. You can also contact us in the following ways:

Or use the form below

If you are happy to be contacted by a BBC journalist please leave a telephone number that we can
contact you on. In some cases a selection of your comments will be published, displaying your name as
you provide it and location, unless you state otherwise. Your contact details will never be published.
When sending us pictures, video or eyewitness accounts at no time should you endanger yourself or others,
take any unnecessary risks or infringe any laws. Please ensure you have read the terms and conditions.