London: The CEO of HSBC has been accused of ‘aiding and abetting’ one of the biggest crackdowns of democracy in the world by backing the security law imposed on Hong Kong by China.

Group Chief Executive Noel Quinn was also accused of turning a blind eye to allegations of hundreds of senior staff belonging to the Chinese Communist party.

Quinn was grilled by British MPs at a hearing of the Commons Foreign Affairs select committee on Wednesday morning (AEDT.) 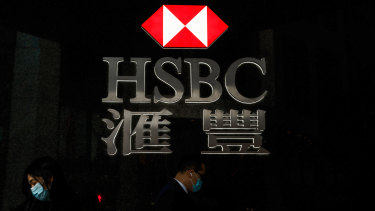 In the thick of it: A HSBC Holdings bank branch in Hong Kong, China,Credit:Bloomberg

The head of the London-headquartered bank was questioned about why HSBC had frozen the account of the exiled democracy campaigner Ted Hui and why senior director Peter Wong had publicly backed the imposition of the security law on the Chinese social media platform WeChat.

Britain opposes the national security law and says it is in breach of the 1984 Sino-British Joint Declaration, which frames Hong Kong’s sovereign status. Australia and the United States also oppose the new security law.

Quinn personally called for the security situation to be stabilised at the peak of the civil unrest; he defended Wong’s stance, which went further than his own. 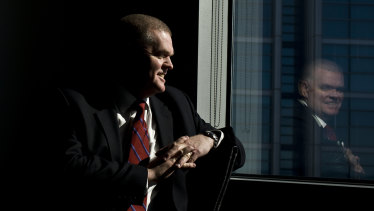 “Peter did sign the petition at that time as did 2.9 million individuals in Hong Kong sign the exact same petition,” Quinn told MPs.

“And that petition was asking, this was before the security law was passed, was asking for a security law to be passed in order to stabilise the position.

“Now Peter is a Hong Kong citizen, he has lived and worked in Hong Kong all of his life and he has been involved in banking for over 40 years in Hong Kong,” he said.

Asked about reports of hundreds of senior banking officials belonging to the CCP, Quinn said he had no evidence of it and would not seek the political affiliation of any employee around the world.

“To be fair I’m not going to turn around and suddenly go asking all of my colleagues in China, ‘Are you a Communist Party member,’ when I don’t ask that same question of my employees in the UK or the US,” he said.

MPs took aim at Quinn, questioning why the bank was willing to take ethical stances on issues like Brexit, climate change and diversity but not on human rights, democracy and the rule of law.

“You’re effectively aiding and abetting one of the biggest crackdowns on democracy in the world,” Labour MP Chris Bryant told Quinn.

“I just find some of your answers really quite bizarre,” Tory MP Bob Seely told Quinn.

Quinn said the word “ethics” was “open to interpretation.”

“I believe we’re doing the right thing for Hong Kong, now is that ethics or is that values or whatever?” Quinn said.

Quinn cast the bank’s activities in Hong Kong, where the company originated, as positive and well-established.

Bryant’s parliamentary colleague Graham Stringer asked Quinn: “There must come a point in some societies where it is impossible for a decent business to carry on when the activities of the government are so evil or wicked? Would you accept that or are you saying there is no such point in Hong Kong?”

“I’m nowhere near that point in Hong Kong,” Quinn said.

When Stringer suggested that the implication of his response suggested there could be a point where HSBC would withdraw in the future on ethical grounds, Quinn scotched the idea of HSBC withdrawing from the peninsula: “No, if I gave you that implication then I shouldn’t have, I’m sorry.”