How Ukraine could achieve victory against Russia: As Kyiv’s forces advance in the south and east, expert lays out the path to victory – with all roads leading to Crimea

‘This war began with Crimea and must end with Crimea – with its liberation,’ President Volodymyr Zelesnky declared back in August. And, according to military experts, that is exactly what his generals are aiming to do.

Ben Hodges, former commander of American forces in Europe, has outlined what he believes to be the Ukrainian route to victory – going via the cities of Kherson and Mariupol and ending ‘when the last Russian soldier crosses the [Kerch] bridge out of Crimea.’

General Hodges, now at the Center for European Policy Analysis, believes Ukraine’s main effort will remain capturing Kherson in the south – where a major assault has been underway since early August – with a secondary attack hooking down through the Donbas and towards the city of Mariupol.

When Mariupol falls, he told a CEPA conference last week, those troops would also converge on Crimea – hammering the peninsula with HIMARS rockets and forcing the Russians back beyond the border.

Dr Mike Martin, a visiting fellow of war studies at King’s College, also raised the prospect of a third assault with Ukraine using its reserves to split the Russian frontline in two and making it difficult for Putin to move reinforcements around as he gave his own thoughts on Twitter.

Nothing is guaranteed in war, and Putin will certainly do everything in his power to stop Kyiv – from piling conscripts on to the frontlines to possibly using a nuclear weapon.

But, as Ukraine’s path to victory becomes clearer, MailOnline examines how it could play out… 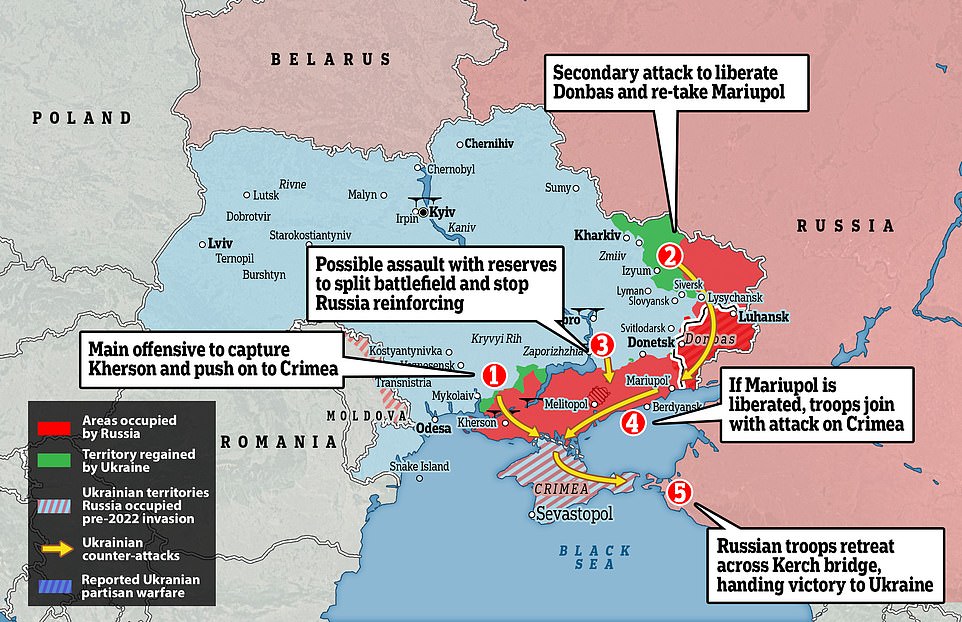 General Ben Hodges, former commander of US forces in Europe, has outlined what he believes to be Ukraine’s path to victory against Russia – saying that ‘Crimea is the prize’ and the war will end ‘when the last Russian soldier walks along the [Kerch bridge, connecting the peninsula with mainland Russia]’

Ukraine began its much-vaunted counter-attack on the Kherson region in early August and has been making gradual progress ever since – though reports have started emerging of a breakthrough this week.

The goal, touted by Kyiv, is to re-take the city of Kherson from Russian control. It is the only regional capital seized by Putin so-far during the war, and occupies a strategic position – spanning the Dnipro River where it flows into the Dniprovska Gulf and on to the Black Sea.

Taking it would deprive Russia of its only toe-hold on the west bank of the Dnipro, all-but rule out any assault on Odessa, give proof to the lie of Putin’s sham referendums and claims to annexation, and open the door to an assault on Crimea – the jewel in the Ukrainian crown. 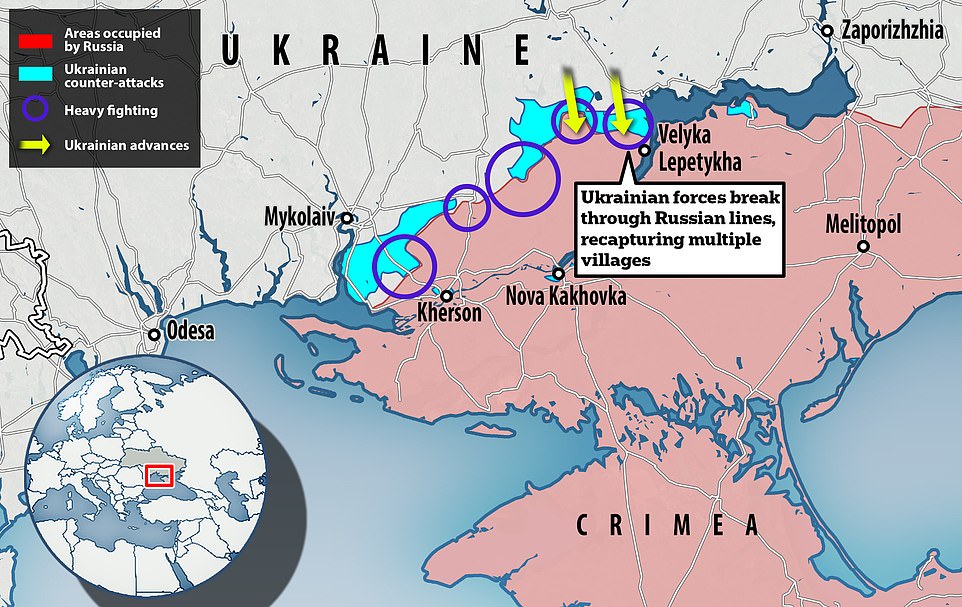 Ukraine has been steadily fighting its way towards the city of Kherson for the last two months, and may have scored a breakthrough this week amid reports of Russian forces withdrawing more than 10 miles 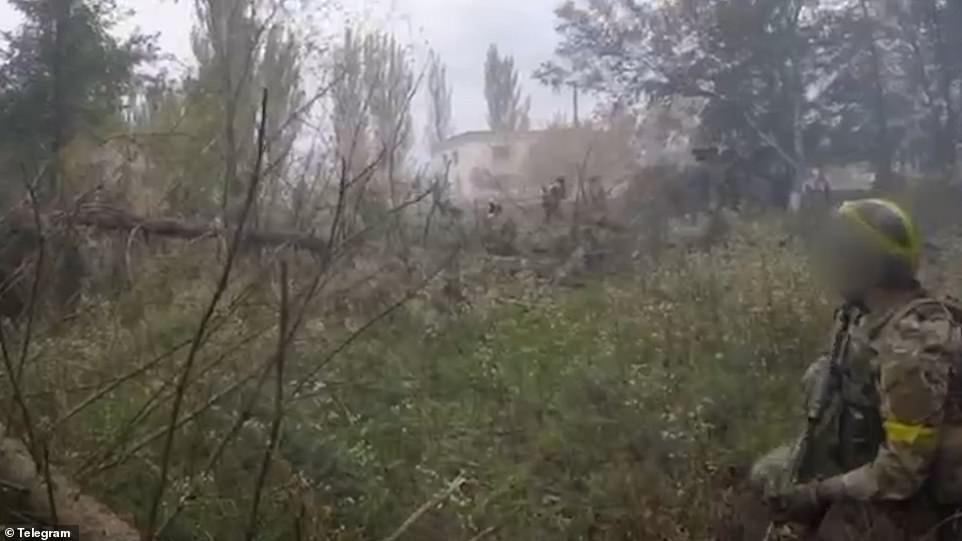 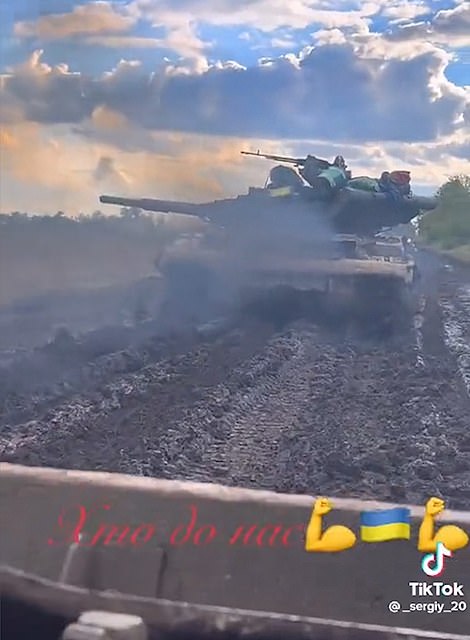 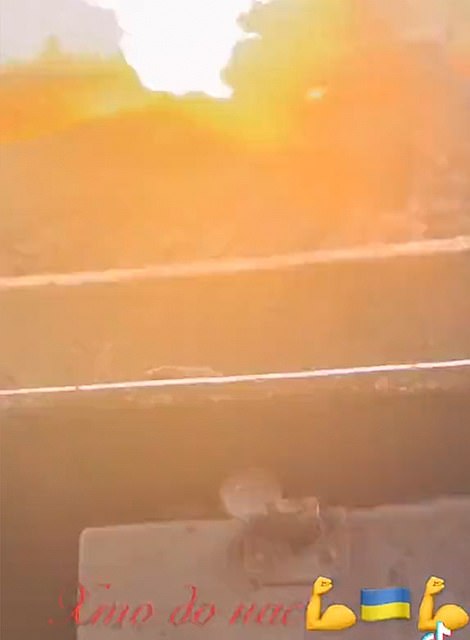 Ukrainian tanks open fire on Russian positions in Kherson, amid a major offensive in the region that aims to recapture the city from Russia – which would be a major blow to Putin’s invasion

General Hodges estimated that breaking the pocket in Kherson may take ‘weeks’. Ukraine itself has given no such timeline. But victory here, if it can be achieved, would be a watershed moment.

Russia has stationed most of its remaining forces in Ukraine, and almost all of its best fighting units, in the city – perhaps up to 30,000 troops in total – and their loss would be a blow the Kremlin would struggle to recover from.

And, should Kherson fall, Kyiv has left observers in little doubt about what would come next.

In the build-up to the assault on Kherson, several large explosions rocked the Crimea – destroying ammo dumps, airfields, and resupply routes. Kyiv was slow to claim responsibility, perhaps trying to disguise what weapon it used for the attacks – which seemed to go beyond its known capabilities – or perhaps fearing escalation by Putin.

The despot, after all, annexed Crimea in 2014 making it – in the Kremlin’s eyes at least – part of Russia.

But, in a speech on August 10, Zelensky vowed: ‘Crimea is Ukrainian and we will never give it up. This Russian war…began with Crimea and must end with Crimea – with its liberation.’

Until a few weeks ago, this frontline looked radically different: Ukraine holding out against Russian long-range attacks in the north in Kharkiv, while Russia made grinding advances in the south around Bakhmut.

But a surprise Ukrainian counter-attack, launched after Russia had relocated some of its best units to the south to help defend Kherson, changed everything.

A breakthrough in Russian lines turned into a rapid advance and then total rout of Putin’s armies in the Kharkiv region, returning an estimated 3,000 square miles to Ukrainian control in just a few days of fighting.

So hasty was the retreat, that Ukrainians reported finding food still sitting on stoves when they arrived in abandoned Russian encampments. Dozens of vehicles and hundreds of rounds of ammunition were seized. 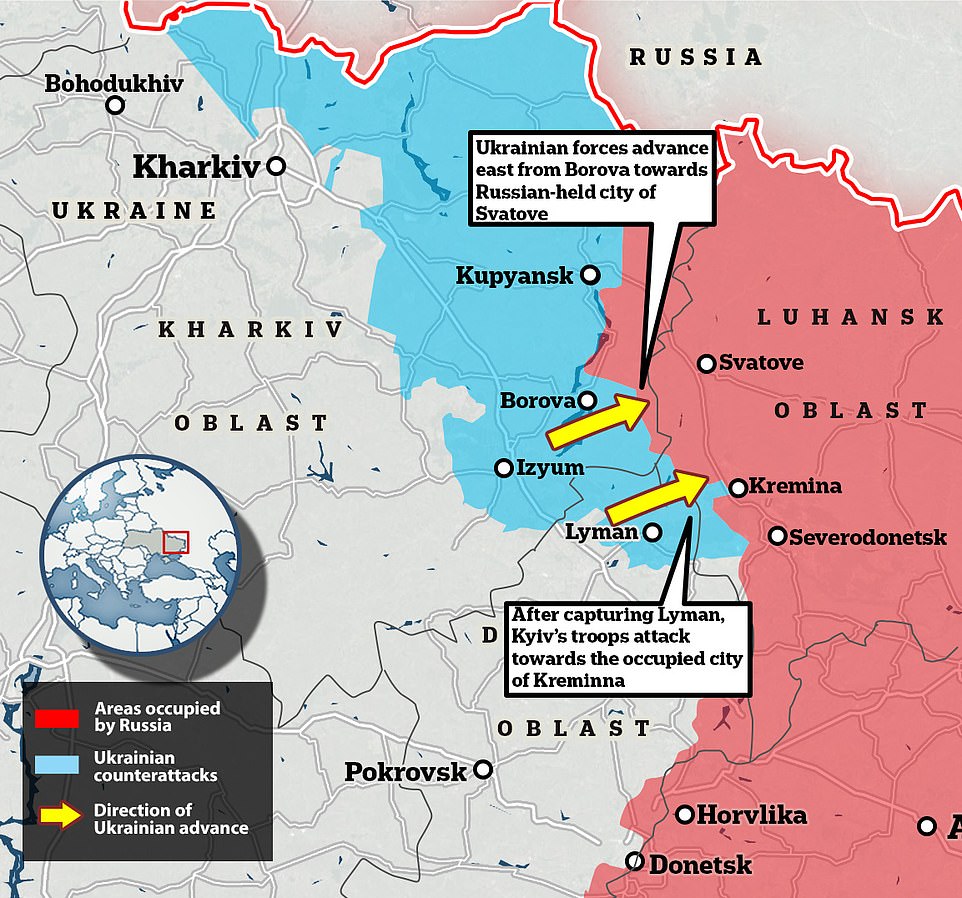 A stunning Ukrainian counter-attack east out of Kharkiv has slowed but has not stopped, with the city of Lyman now under Kyiv’s control and its troops pushing towards the cities of Svatove and Kreminna 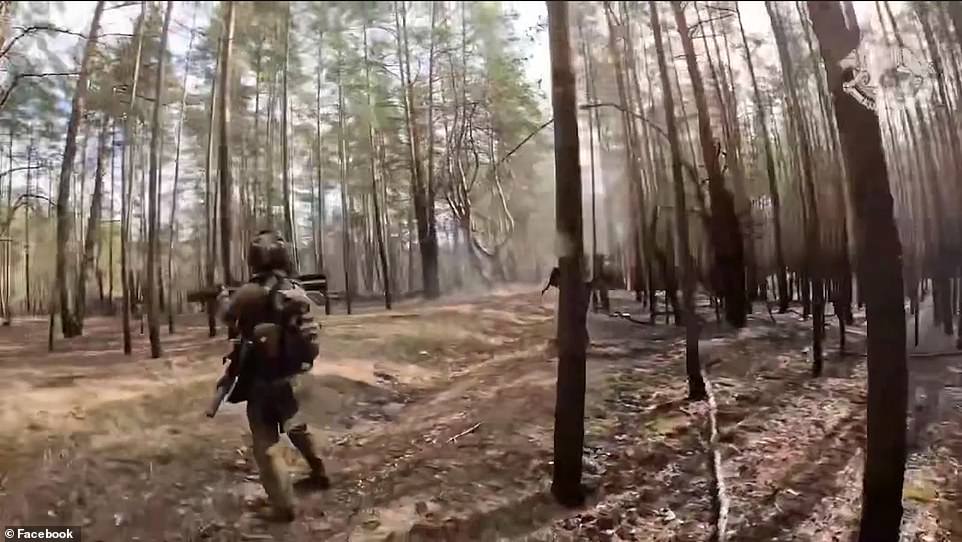 Ukrainian troops are filmed ambushing Russian armoured vehicles using anti-tank launchers in Donetsk, leaving at least one of them destroyed

And the offensive is still going. Russia has regrouped and Ukraine’s advance has slowed, but it has not stopped.

Lyman, a major transport node in northern Donetsk, was captured at the weekend. Troops are now advancing from there towards Kreminna, in neighbouring Luhansk, and from Borova to Svatove in the same region.

Should those two fall, it would open the way for an attack on the cities of Lysychansk and Severodonetsk – which Russia expended blood, sweat, and ammunition capturing over the course of weeks and which is key to its claim of having ‘liberated’ the Luhansk region.

From there, Ukraine could choose to attack either of the regional capitals – the cities of Donetsk and Luhansk – or to bypass them and push south towards the sea and the city of Mariupol.

That is certainly the conclusion that General Hodges has come to.

‘My sense is that the operations that are underway now – the northern arm that is coming down from Kharkiv towards Donetsk, [and’ that’s heading straight towards Mariupol,’ he told the CEPA conference.

Aside from Kherson, Mariupol has been the other prize captured by Putin in a little over seven months of war, having worn down the heroic Ukrainian defenders to the point of surrender – which came back in May.

Should Ukraine re-capture Mariupol, it would be a hammer blow. Russia painted the Azov Battalion – who defended the city – as war criminals and neo-Nazis. Putin’s claim to be ‘de-Nazifying’ Ukraine is, at least in part, based on destroying this unit and taking the city.

Should Mariupol fall, General Hodges believes the Ukrainian forces will head in one direction: ‘Towards Crimea.’

‘When and where to commit your reserve is literally THE question for the theatre commander,’ Dr Mike Martin of King’s College wrote on Twitter around a month ago, after the extent of Ukraine’s counter-attack around Kharkiv became clear.

Much remains unknown about Ukraine’s reserves. Kyiv has kept the size of its armed forces and its casualties a closely-guarded secret, meaning it is impossible to guess at how many men it might have ready and able to deploy and what kind of equipment they could be armed with.

However, Kyiv has carried out a general mobilisation of the population – unlike Russia, which has belatedly gone for ‘partial’ mobilisation – meaning every man aged up to 65 is eligible to be called up, which would amount to millions of troops if they could all be armed and trained.

So, the question is: Where, how and when does Ukraine use these forces? 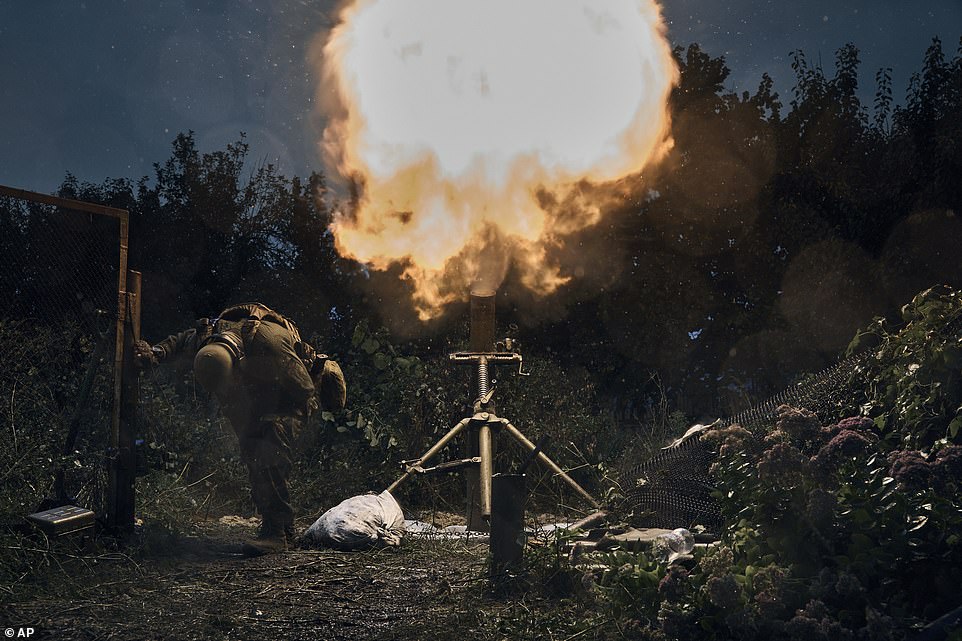 Ukraine has an unknown number of troops in reserve, but has fully mobilised its population – giving it a pool of millions to draw on, and they could be used for an attack 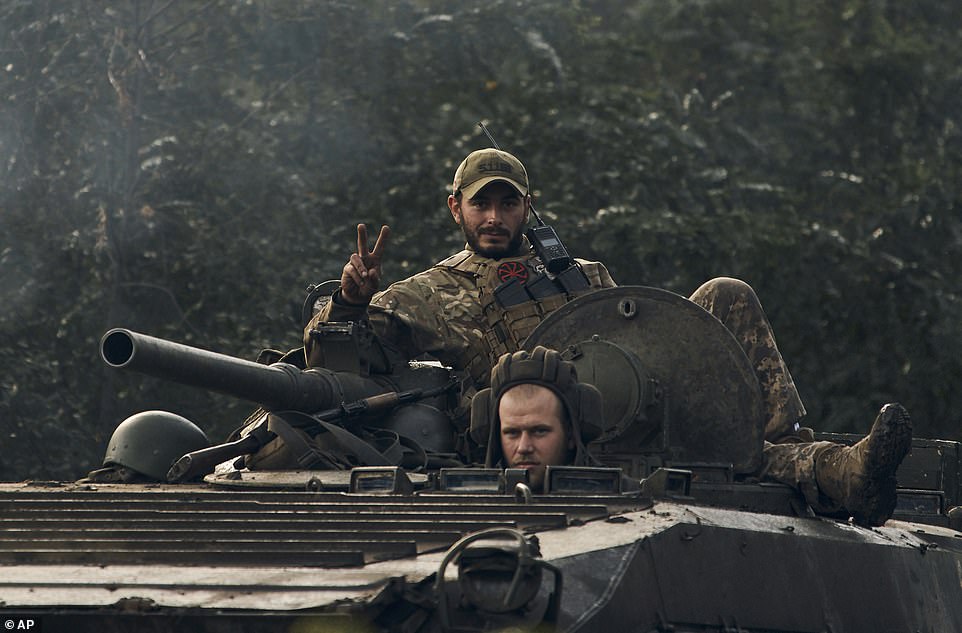 Dr Martin, posting on Twitter today, believes he has found the answer. ‘Ukraine [would use] its strategic reserve to sever the Russian Armed Forces in Ukraine into two pieces that cannot mutually reinforce.’

Alongside the tweet he posted a hastily-drawn map showing the presumed direction of the advance, from the cetnral cities of Dnipro and Zaporizhzhia towards Mariupol and nearby Berdyansk.

Aside from skirmishes around the Zaporizhzhia nuclear power plant and Ukrainian partisan activity, this front has been relatively calm since Russia advanced across it early in the war – but Dr Martin suggests it could soon find itself at the centre of the action.

The trust – assuming Ukraine can do it – makes sense. It would free up the forces near Kharkiv to focus on attacking Luhansk and Donetsk, liberating the Donbas from Russian control. And it would prevent Putin from pulling any units out of Kherson to help defend the region – unless they were willing to punch through Ukrainian lines.

‘Crimea is the prize. That’s what it is going to be. Victory will be when the last Russian solider walks across that long bridge,’ predicts General Hodges – speaking about the bridge Putin ordered built across the Kerch Strait, connecting Crimea with the Russian mainland.

Mark Hertling, another former US general speaking at the same CEPA event, agreed that the peninsula is where Ukraine is aiming to get. But, he cautioned, taking it is going to be ‘a tough fight’.

Unlike the rest of Ukraine, which is primarily flat and open, the Crimean peninsula is largely separated from the mainland by what General Hertling describes as ‘marshland’ – a series of small islands with only two main roads that Ukrainian forces can use to attack it.

Even assuming that Russian forces are in bad shape by the time any assault comes, that still makes them extremely vulnerable and limits Kyiv’s options for how to go about the operation. 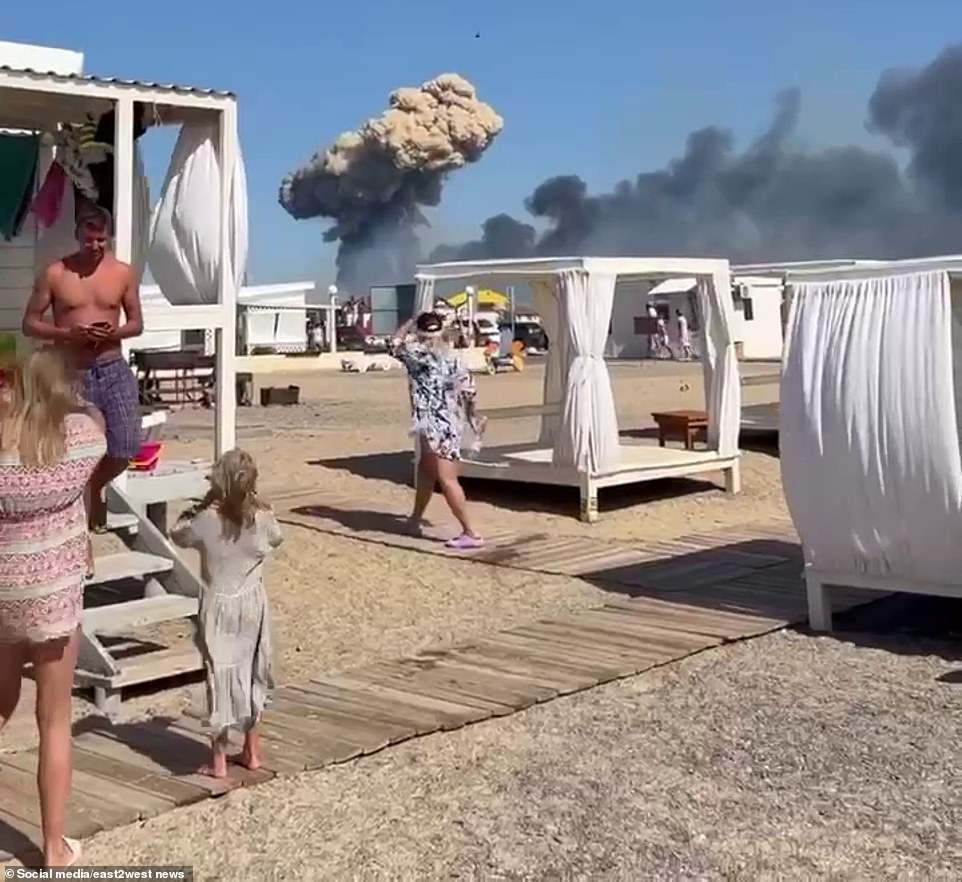 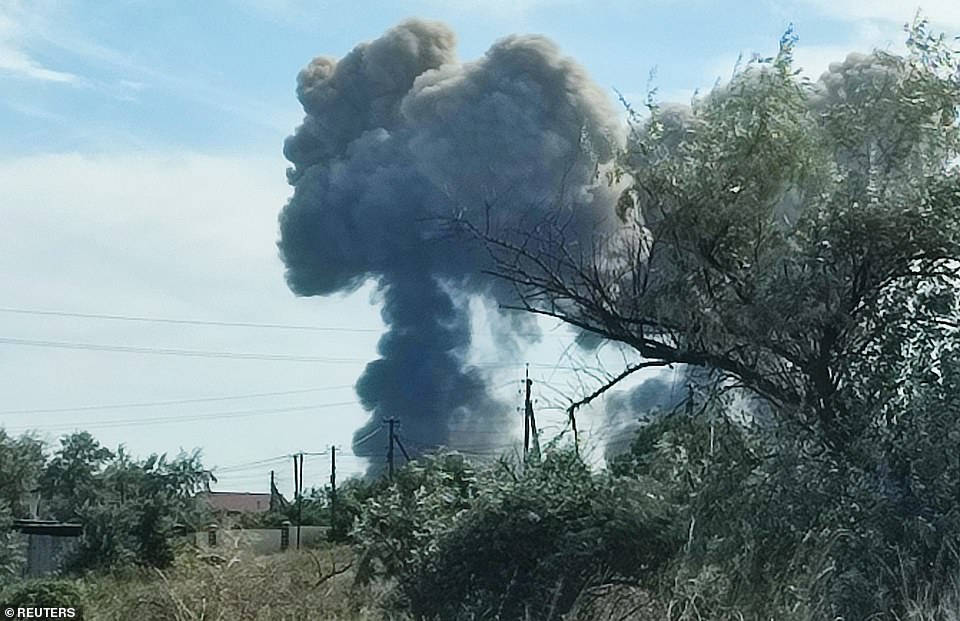 A large mushroom cloud is seen rising from the scene of explosions at a Russian held airbase in Novofedorivka, Crimea 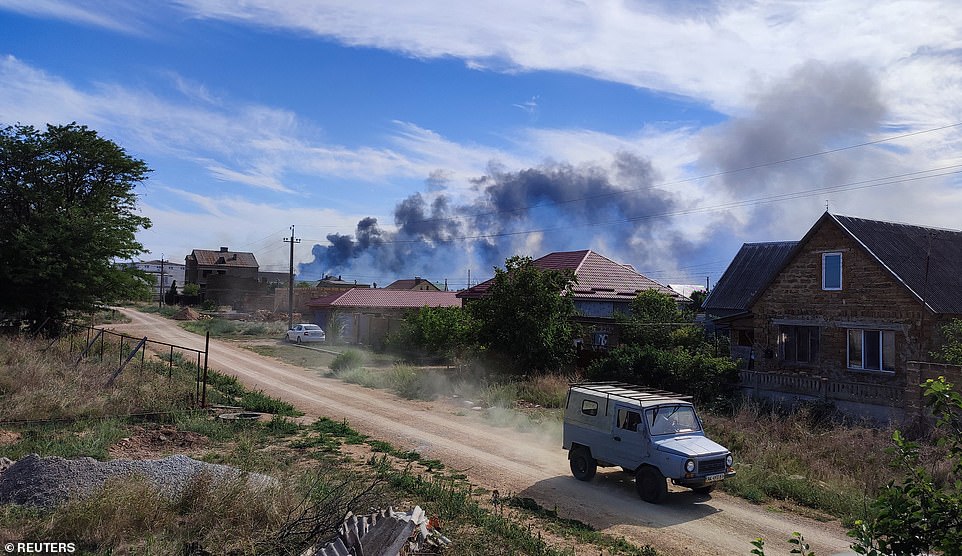 Smoke rises after explosions at a Russian military airbase near Novofedorivka, in occupied Crimea, August 9

‘When Russia invaded in 2014 they used mostly naval infantry and special operators to go into Crimea,’ General Hertling said. ‘Ukraine don’t have ships right now, they don’t have naval operations – so it is going to take some long-range [artillery] to go in there.

‘But you can’t take ground with just artillery, you have to have some people go in there on the ground to do that. It is going to be a tough fight.’

And Putin, General Hertling is certain, will put up a fight to keep Crimea – provided he is still the one at the helm.

‘If Mr Putin is still in power he will view [an attack on Crimea] as even more contentious than attacks in the other oblasts of Ukraine,’ he added. ‘We have not yet seen Russia use their strategic bomber fleet, we have not yet seen them use their naval forces to the extreme that they potentially could.

‘What you might ask is: Should we be as concerned about their air and their navy forces given how we’ve seen the disfunction in their ground forces? I would say probably. But they still have those available.’

General Hodges agreed, but believes that once Ukrainian artillery – particularly the devastating HIMARS systems – get within range of Russian bases in Crimea they will become ‘untenable’ and Putin will have ‘a choice’.

‘I think the Ukrainians will leave that big bridge up as an invitation to leave,’ General Hodges added.