The Coronation Diet: How post-war rationing meant sugar, butter and cheese were in short supply when the Queen came to the throne in 1953… but today’s abundance and ‘Deliveroo culture’ has seen Britons BALLOON in size

At the time of the Queen’s Coronation in 1953, sugar, butter and cheese were among the foods that were still subject to rationing.

Even though thousands of street parties took place around the country, Britons had to make do with limited supplies to make sweet treats and snacks due to the hardship imposed by the Second World War.

Whilst sweets and chocolate, eggs and cream came off ration in the months before the Queen was crowned at Westminster Abbey on June 2, sugar stayed on the restricted list until September of that year and meat rationing did not end until July 1954.

The average diet at the time was reliant on staple potatoes, whilst ingredients that we take for granted today – including even olive oil – were far less common.

But 70 years on, Britons have become used to enjoying a wide array of foods, with waistlines growing as a result. Fast food delivery apps such as JustEat and Deliveroo have become hugely popular, prompting concerns among experts that they are helping to fuel an obesity epidemic.

In the 1950s, the average weight of a man was 11stone 6lbs, their waist size was 34inches and they were around 5ft 7inches. Now, men weigh around 13st 3lbs, with waists at an average of 37inches.

It is a similar picture for women, with weight increasing from 9stone 10lbs to 11st and waist size going from around 27.5inches to 34inches today.

In 1956, three years after the Queen’s Coronation, the average Briton was consuming around 2,600 calories a day. Now, that figure is believed to be more than 3,000. 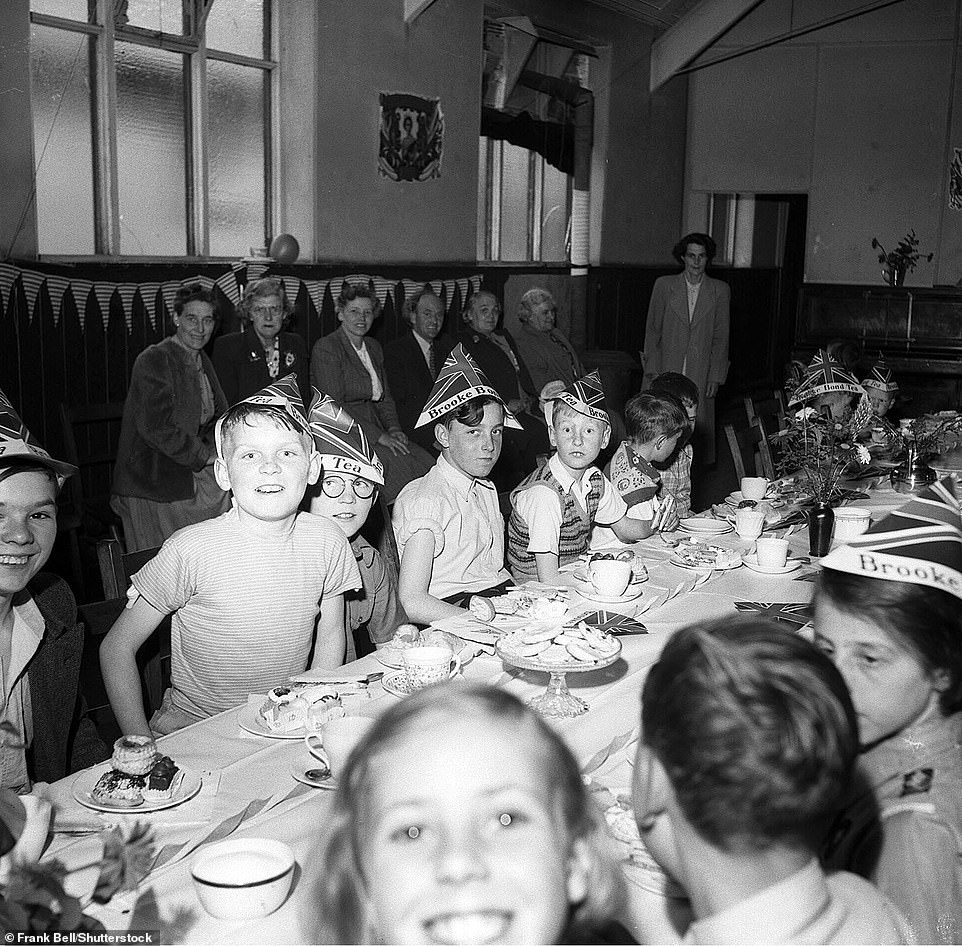 At the time of the Queen’s Coronation in 1953, sugar, butter and cheese were among the foods that were still subject to rationing. Even though thousands of street parties took place around the country, Britons had to make do with limited supplies to make sweet treats and snacks due to the hardship imposed by the Second World War. Above: A children’s party celebrating the Coronation 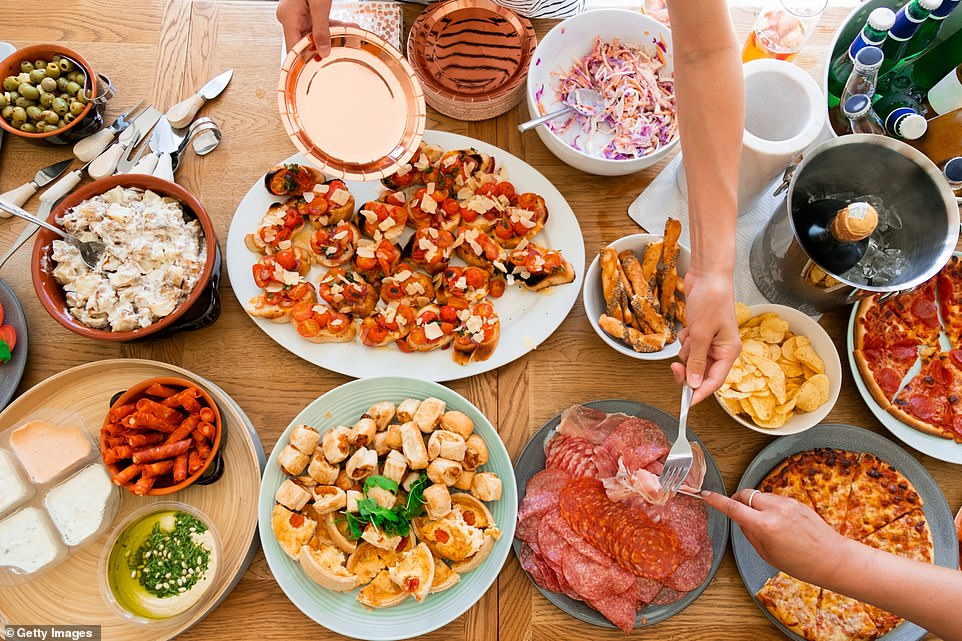 Britons have now become used to enjoying a wide array of foods, with waistlines growing as a result. Fast food delivery apps such as JustEat and Deliveroo have become hugely popular, prompting concerns among experts that they are helping to fuel an obesity epidemic

Data released earlier this year showed that 63 per cent of Britons are overweight, putting them at increased risk of serious illness, including cancer and heart disease.

Worst 10 countries for obesity in Europe

When the Queen was crowned, almost no men and women were living with type 2 diabetes. People who are obese and and do not exercise are most likely to get the condition.

Now, there are nearly five million people living with type 2 diabetes and Diabetes UK estimates that 13.6million people are at increased risk of developing it due to their lifestyles.

Although the war had ended in 1945, rationing did not begin to be lifted until 1948, starting with flour in July of that year and clothes in March 1949.

On May 19, 1950, rationing then ended for canned and dried fruit, chocolate biscuits, treacle, syrup, jellies and mincemeat.

Petrol rationing, which had been imposed in 1939, ended in May 1950. This was followed by soap in September of that year.

Sweets and chocolate came off ration in February 1953, whilst restrictions on eggs and cream were lifted in March and April of that year respectively.

But at the time of the Queen’s coronation, as well as restrictions still being in place on sugar and butter, the supply of meat was also regimented.

Sugar finally came off ration in September 1953, whilst butter rationing ended the following May and meat rationing stopped in July 1954.

Despite the restrictions, the nation was fitter than it had been previously, with pregnant women and children granted additional eggs and milk to help keep them strong and healthy.

Children living through the war also had access to the National Loaf, which was made from wholemeal flour and fortified with calcium and vitamins.

Speaking to the Telegraph, food historian Dr Annie Gray said that the culture around food in the 1950s was better than it is today.

She said ‘plates were smaller’ and ‘snacking didn’t happen all day’, and whilst there were ‘biscuits, cakes and sugar’ later in the 1950s, today we eat sugar in ‘more insidious ways’.

Even when rationing lifted, habits were still centred around not wasting food, whilst walking to most places was more common than it is now.

By contrast, recent figures showed that the average household throws away approximately £800 worth of food every year.

In November 2019, before the coronavirus pandemic struck, the average household threw away 24.1 per cent of all bread, chicken, milk and potatoes that were purchased.

Only one in ten British teenagers eats enough vegetables

Nine in 10 British teenagers do not eat enough vegetables, a Government-funded study suggests.

Just 10 per cent consumed 200g or more per day out of the NHS’ recommended intake of 400g of fresh fruit and vegetables, or ‘five-a-day’.

The research also found only 30 per cent of youngsters aged between 11 and 15 ate 100g of fruit, the equivalent of a fresh apple a day.

It comes amid a obesity crisis with up to a quarter of English youngsters considered too fat by the time they reach secondary school.

University of Birmingham academics found 73 per cent ate more added sugar than the NHS recommended maximum of 30g, about seven teaspoons, per day.

The British research comes as Danish experts published a separate study saying that dentists should check children’s body mass index (BMI) when they go for check-ups in order to better track and combat childhood obesity.

Both studies were published on the same day the WHO urged health authorities to do more to combat an ‘obesity epidemic’ across Europe.

The UK is currently third in terms of percentage of adults who are obese, behind only Turkey and Malta.

People in the 1950s were also far less likely to skip breakfast and most did not consume cereals that are often high in sugar, salt and fat.

Dr Gray added that 60 per cent of working class Britons went home for lunch in the 1950s, whilst today fast food chains are popular choices for busy people on their lunch breaks.

Dinner would also have nearly always been cooked from scratch, rather than being delivered from unhealthy takeaways or being served in restaurants.

Meals would also have been around a dining table but are often now in front of either television or smart phone screens. Back in 1953, less than one in five Britons owned a television.

In the 1950s there was not access to ultra-processed foods – including shop-bought cakes and biscuits – which are now so common.

A study released last year found that processed foods make up more than 60 per cent of the calories consumed by British children.

This puts children at increased risk of obesity in adulthood, according to the team from Imperial College, who say ‘urgent action is needed’ to reduce harm.

Earlier this month, the World Health Organisation warned that the rise of ‘Deliveroo lifestyles’ would make Britain the fattest country in Europe within a decade.

They said that services such as Deliveroo and Just Eat have become part of the nation’s ‘culture and lifestyle’.

A report by the WHO said restaurant and takeaway meals often contain more fat, sugar and salt than those cooked at home.

Apps also make it easy to order food without needing to move, meaning there is less opportunity for exercise.

Britain is the third fattest nation in Europe – behind only Turkey and Malta – and 27.8 per cent of adults are excessively overweight.

In terms of childhood obesity, Britain ranks twelfth on the continent for children aged five-to-nine and eighth for children and teenagers aged from 10 to 19.

There are fears the Covid pandemic has only made things worse due to a drop in exercise and increases in ‘the consumption of foods high in fat, sugar and salt’, partly driven by a rise in the use of meal-delivery apps, the report said. 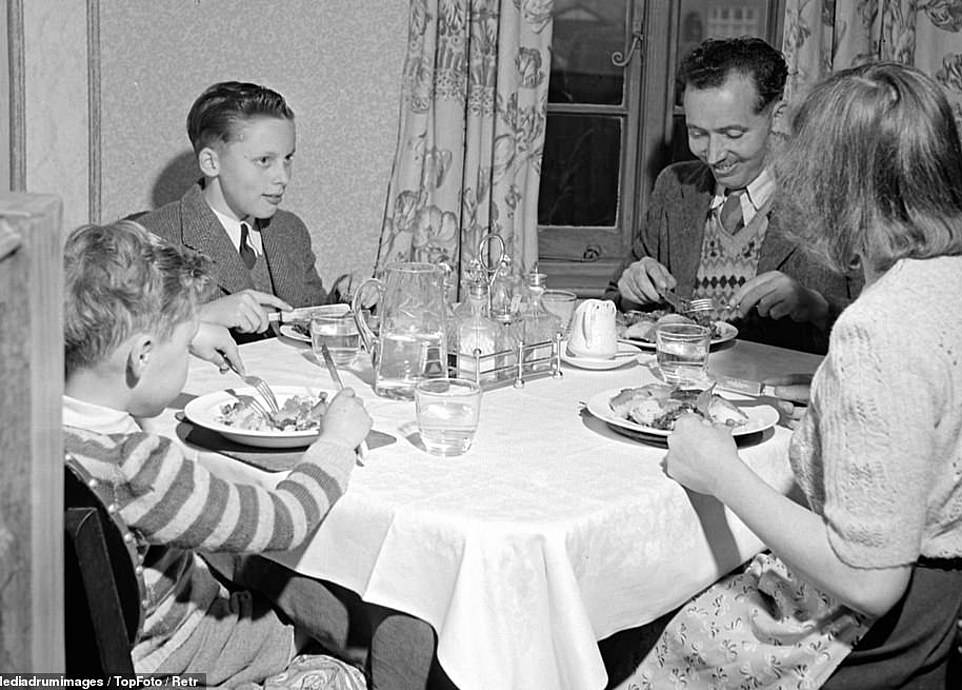 Meals would also have been around a dining table but are often now in front of either television or smart phone screens. Above: A British family having dinner together in the 1950s 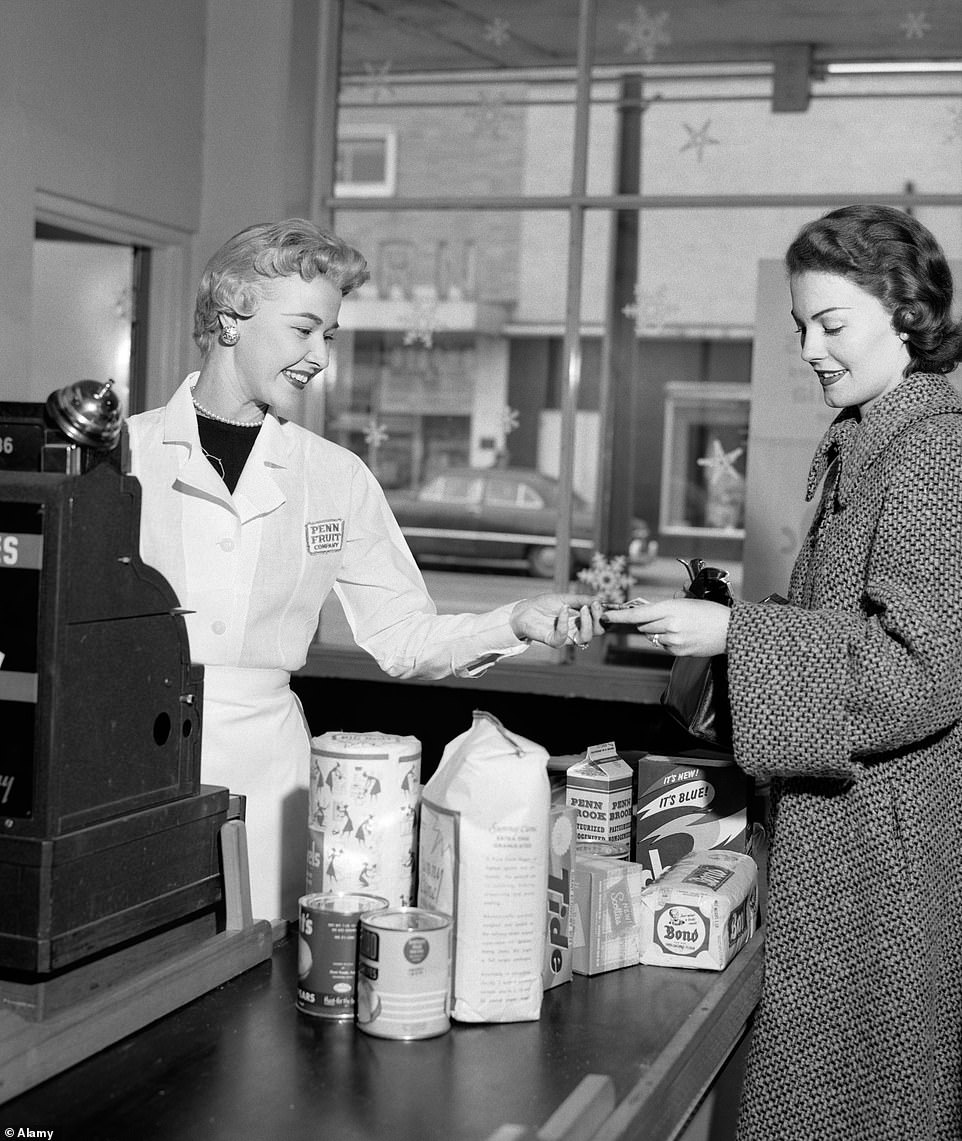 Rationing finally ended in 1954, allowing Britons to enjoy a full range of tinned, fresh and packaged goods. Supermarkets were also on the rise. Pictured: A woman at a checkout in the 1950s 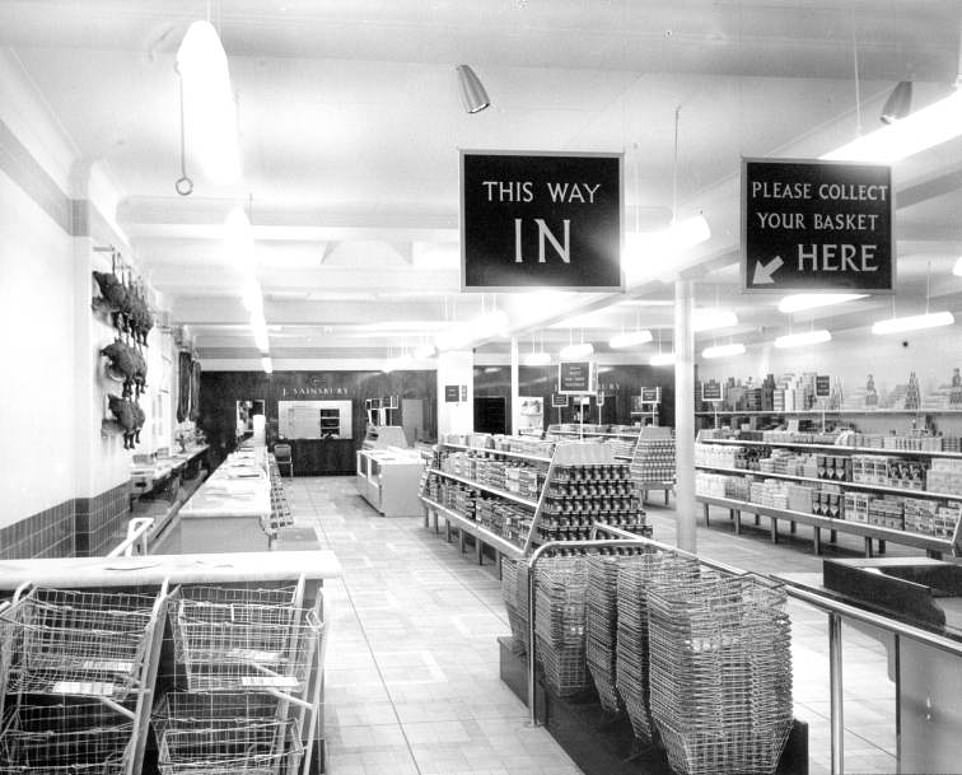 The rise of supermarkets also made shopping much easier. Pictured: The interior of a Sainsbury’s first ever self-service store 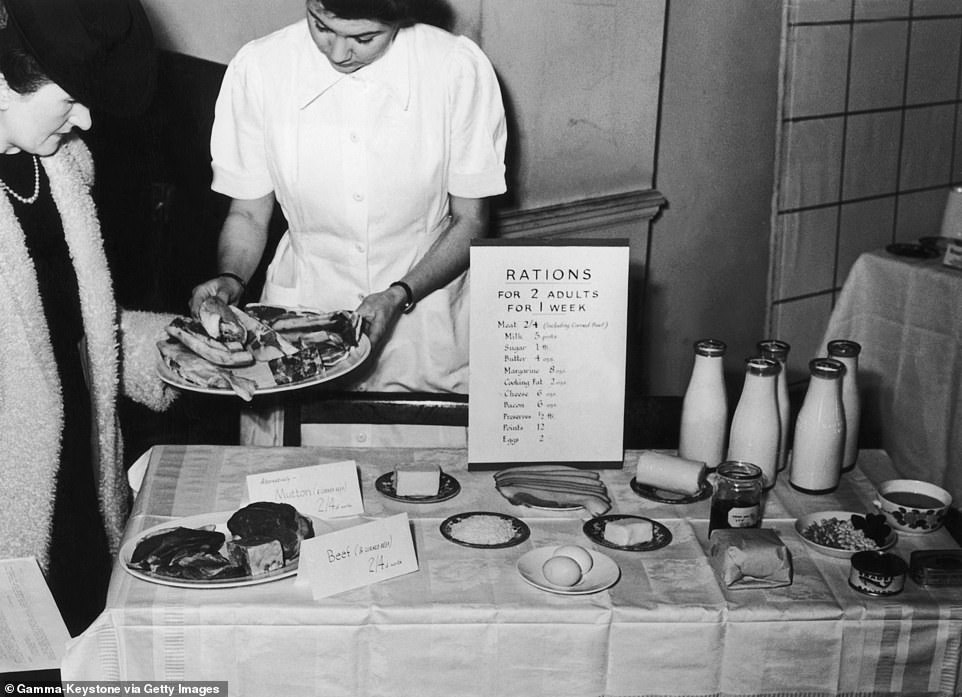 Rationing was imposed to try to focus production on the war effort in the fight against Nazi Germany. Above: Two women hold a plate of food besides a table showing the weekly ration for two adults

Limiting the number of takeaway outlets in low-income neighbourhoods is just one of the measures the WHO claims is needed to tackle the problem.

‘Alarmingly, there have been consistent increases in the prevalence of overweight and obesity in the WHO European region and no member state is on track to reach the target of halting the rise in obesity by 2025’, the report said.

Obesity is associated with a plethora of health problems, including musculoskeletal complications, type 2 diabetes, heart disease, and at least 13 types of cancer.

The WHO also warned that obesity could soon eclipse smoking as the continent’s leading cause of cancer.

The WHO said little is known about the impact of meal delivery apps on obesity rates but noted their popularity in Europe has been rising in recent years.

It also noted that meals available on apps tended to be higher in both calories and fat, sugar, and salt, than home-cooked meals.

The WHO also cited UK research showing take-aways or restaurant meals account for between a quarter to fifth of British adults’ energy intake. 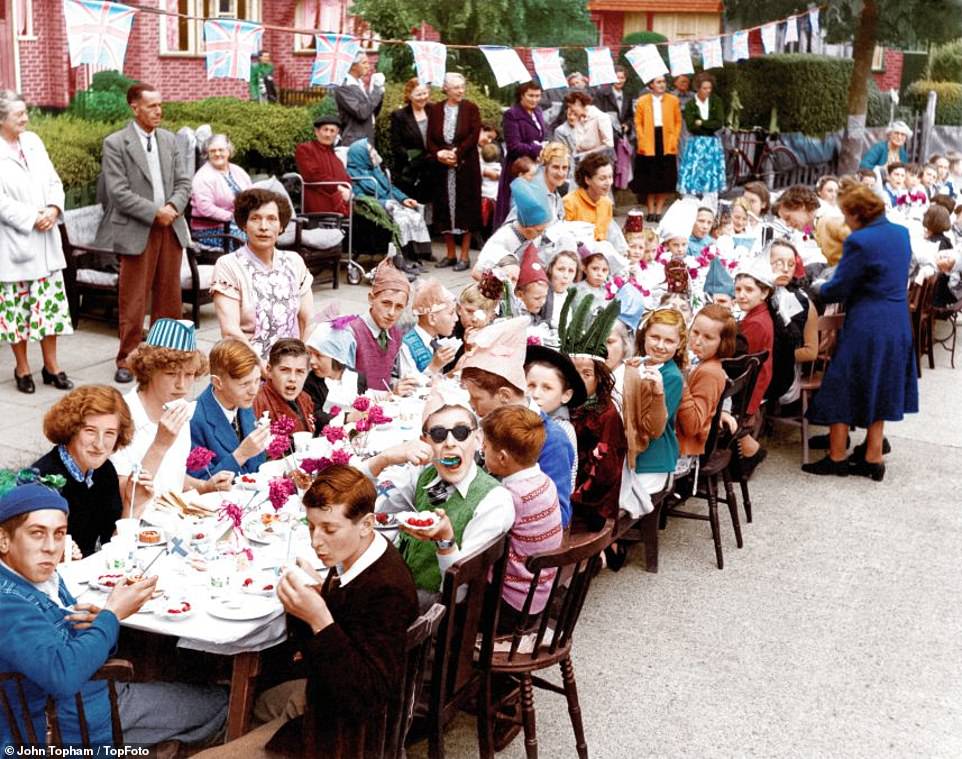