Twenty-five years ago I was a struggling stand-up comedian with a working partner and a young daughter and no professional skills whatsoever apart from being able to cut my own hair in the shower with a Gillette Mach 3 razor. We needed money, I had to find work, so I racked my brains trying to think up jobs I could do – muso, filmmaker, razor-hairdresser.

And then, a lightbulb-moment! Newspaper humour columnist! Yeah, that sounded like a guaranteed pathway to financial security and employment longevity! So I wrote a couple of vaguely humorous movie-themed articles and sent them off to every newspaper, magazine, periodical and club-newsletter in the country … and I got one response. The Age called me up and said “OK Danny, we’ll give you a one-week trial, see how it goes”. And that one-week trial lasted 1283 weeks. Well, nobody told me to stop. 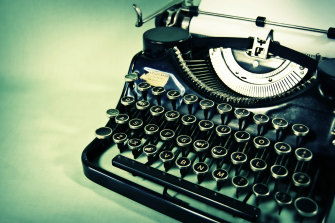 Twenty-five years ago, technology was pretty basic. I wrote on a huge clunky Brother word-processor that was also a printer and a sewing machine/overlocker. And the internet wasn’t a thing yet, so I filed my columns using the email of the time: a 40-minute tram-trip into town, hand-delivering my hard-copy directly to The Age offices (sealed in an envelope for anti-virus email-protection). Sometimes I’d take my daughter with me: she’d say “Are we going to the playground, Daddy?” and I’d say “No, we’re going to file Daddy’s column but you can climb on the sub-editors. Come on, it’ll be fun.”

Twenty-five years ago, I started in a section called “Metro”, which then became “Living”, then “Today”, then “The Culture”, then “A3” – in fact, I’ve appeared in pretty much every section of the paper except Obituaries (but one day I hope to have a little piece in there too). I finally wound up in Opinion and I pity the poor editors who’ve had to deal with my columns, muttering “Oh God, Katz has written about his post-nasal drip. I guess we’ll have to put it next to this highly academic analysis of the Taliban’s scourge of terror across Afghanistan. Can we put some space between them? More space? Maybe shift him over a page into Weather? Can we?”

Twenty-five years of writing columns and I’ve explored every corner of my life: every major event, every drab day, every youthful memory, every friend’s dinner party where someone said a funny thing and I wrote about the party, changed the names, flipped the genders, and pretended I said the funny thing. For 25 years I’ve lived in a constant state of “Could this be a column?”, never missed a week, loved every moment – but now the kids have moved out, life is more settled, friends have stopped sharing dinner party stories unless a copyright lawyer is present.

So here comes the hard bit: this will be my last weekly column. And I want to say thanks to all my longtime readers who’ve endured endless inane riffs on pets, parenting and posture-support man-bras. Thanks to all my nearest and dearest who’ve let me exploit and ridicule them for no reimbursement at all. And of course, thanks to a newspaper that took a chance on a self-haircutting guy with a puffy rattail at the back where his stumpy arms couldn’t reach.

More than anyone else, I want to say thanks to my wife, Mitch, who’s been half of this wild column-ride from the start. Who allowed me to document our relationship for 25 years (“No bedroom columns, Danny!/But Mitch, that’s the funny stuff!”) Who edits everything I write and always makes it better (and who still has to edit Modern Guru in Good Weekend. Sorry Mitch, that column continues).

Thank you, my beloved.

Danny Katz is a Melbourne humorist.