Wherever John Denton finds himself in the world, Kath Day-Knight – that "foxy moron" from Fountain Lakes – is never far behind.

The secretary-general of the International Chamber of Commerce was in Brazil last year and remembers a senior political figure could barely contain his excitement at meeting the husband of Jane Turner – the actress, comedian and brains behind one of Australia's most iconic television characters. The same scene plays out during trips to the United States, Europe and Asia.

"As Jane would say, she has been more valuable to my career than I have been to hers," Denton chuckles. "It's absolutely crazy how many people I meet who know and love the show. Jane actually is the face of Australia to many people." 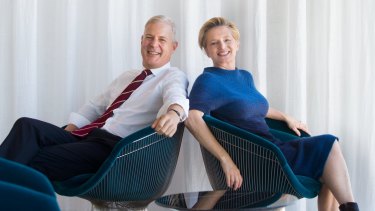 John Denton and Jane Turner have criss-crossed the globe throughout their hugely diverse careers. Credit:Simon Schluter

For Kath and Kim fans, the thought of Kath as a tool of global diplomacy – a door opener and conversation starter with the political and business elite – is almost too delicious to comprehend.

Denton's CV doesn't hurt either. A former diplomat who relished tumultuous stints in Moscow and Baghdad, the 60-year-old has also served on the boards of the Australian Ballet, fund manager IFM Investors and the Business Council of Australia; advised on the landmark Australia in the Asian Century White Paper; and is the patron of the Australian branch of the United Nations High Commissioner for Refugees.

"The global policy discussion is better informed by having the Australian voice at the table," Denton says. "I genuinely think the great thing about the Australian mindset is that we have always been very externally focused. What worries me a little is the 'Fortress Australia' mentality that seems to be emerging."

Denton was the long-serving chief executive of law firm Corrs Chambers Westgarth before he and Turner packed up and moved to Paris in 2018 to add a new line to the CV: first Australian to lead the century-old International Chamber of Commerce (ICC).

"We've always been up for adventures," Denton says. "None of this was ever really planned. Jane hates planning so we are more intuitive and we've kind of traversed both having careers – but there have been trade-offs."

On first impressions, it would be easy to mistake Denton as another bland globe-trotting businessman. At one point during an interview in London, even he deadpans that he's "not really anything other than an Anglo-Saxon male". But over the course of a long chat, it becomes clear that Denton is a unique force to be reckoned with.

Charming, energetic and fiercely intelligent, he is a strategic thinker whose big-picture focus can at times be hard to keep up with. He has a strong progressive streak and the values instilled during an Irish Catholic upbringing are obvious. He's also wildly funny.

"It's very hard to take myself seriously when I'm surrounded by the funniest woman in Australia. And you must never become pompous," Denton says. "But Jane and our kids still say 'leave the jokes to us'."

He is determined to reshape the ICC – formed by northern industrialists, financiers and traders from the ashes of World War I and representing about 45 million businesses in 100 countries – into a modern organisation with an effective voice at a time of global political upheaval. The ICC has more than 200 employees in Paris and is responsible for the International Court of Arbitration. 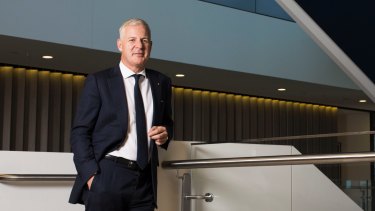 John Denton is the first Australian secretary-general of the International Chamber of Commerce. Credit:Dominic Lorrimer

He strongly defends the rights of business to engage in corporate activism, citing the financial and productivity benefits of demonstrating leadership on climate change and creating workplaces which embrace women and people of different sexual orientations and ethnic backgrounds.

"I have previously been accused of virtue signalling and I find that one of the more curious aspects of Australia," he says. "The role of diversity in Australia is absolutely critical to its potential for the 21st century. It's one of its greatest strengths.

"I used to get attacked by some journos when I was running Corrs because I got involved in diversity issues. They said, 'oh you should just be focusing on profit and loss' and things like that.

"They did not understand business. My job was and is to create an environment where the best talent want to come to work every day and, by the way, the best talent is not all white, straight males."

In hindsight, Denton regrets not introducing gender quotas at the law firm after "listening to sensible people who talked me down from it". Denton made up for that lost opportunity by signing off on major changes at the ICC's arbitration court that overnight saw women make up half its 160 sitting members.

He is also particularly proud of his role as a key adviser on Australia in the Asian Century White Paper, a pivotal moment in the realisation that the nation's social and economic fortunes are tied to its neighbours and not Europe or the United States. He says the paper, released under Julia Gillard, was seen by Asians as overdue acknowledgment of their potential and contribution to Australia.

"I used to get fan mail from young Australians of Asian origin saying 'thank God you're calling it out'."

Long before his recent work in Australia, Denton was a diplomat posted to Moscow just as Mikhail Gorbachev was flexing his muscles as the last leader of the Soviet Union. Denton loved the intellectual thrill of the job and the buzz of Moscow but something had to give.

"We were commuting a lot, we had our first child and it was all kinds of crazy," Denton says of the time. "I was having a very interesting career but foreign service isn't really set up to enable a partner, a spouse, to have their own career.

"We realised we didn't sign up for this so it was easier for me to change jobs than it was for her. Jane's job is what she is. She's a creator and it's her passion. So I changed jobs and eventually went into law."

The shift created surprising opportunities. As Turner shot to fame in Fast Forward  back in Australia, Denton was dispatched to become charge d'affaires in Iraq during the early 1990s Gulf crisis and only left Baghdad one day before the US launched Operation Desert Storm.

"That was quite an experience," he says through a wry smile.

Denton makes no apologies for calling on his diplomatic skills to publicly argue for a more aggressive response to climate change and is keen to stress the ICC has an "absolute, explicit" commitment to the global goal of limiting temperature increases to 1.5 degrees and achieving net zero emissions status by 2050.

When a huge bushfire raged towards Denton and Turner's holiday home on the NSW south coast on New Year's Eve, the threat of a changing climate suddenly became very personal. They and everyone else in the tight-knit community of Cuttagee, south of Bermagui, fled to safety. The house was expected to burn but was spared.

"I was really shocked because people in that community who we spend a lot of time with have kids who are RFS volunteers. These 18-year-olds were in and around houses as they exploded, and in fire trucks engulfed by flames two or three times higher than the vehicle. These kids are heroes."

The fires solidified Denton's already strong belief that business had a central role in pushing for a more rapid reduction in global emissions.

"People want to have a better environment and are actually aware there's a change going on in the world. They want to do something about it. What they're not looking for is the political tropes that go on, say in Australia, where if you use the wrong word or say the wrong thing on climate you kind of discover yourself in an Alice in Wonderland mystery."

Denton and the ICC have launched GreenUp Australia, a business-led initiative that will use digital technology like blockchain to inspire the mass replanting of trees. He wants it to become the largest fire-resilient, native reforestation and carbon sequestration project in the world.

"The whole idea is to take practical action with local communities and local businesses on carbon abatement. I thought people would come and piss on it from great heights – you know, that usual Aussie thing – but I was astounded by the response. People loved the idea."

The ICC has signed a memorandum of understanding with the ACT government to pilot the project in bushfire-ravaged land to the south of Canberra and if the concept takes off, Denton says he can globalise it through the ICC's vast international reach.

Denton shifts uncomfortably when asked whether the summer bushfire catastrophe could prove a turning point for Australia's attitude to climate change.

"The politics of this in Australia are just toxic, and what can help change people's attitude and approach to the environment is giving and helping them find practical things to do and I'm only interested in that," he responds.

"One of the joys of being a leader and having a job like mine is that you can actually do something. If you can, you do."